The one-off Rolls-Royce Wraith features air-brushed artwork on its bonnet, depicting the Middle East as seen from space 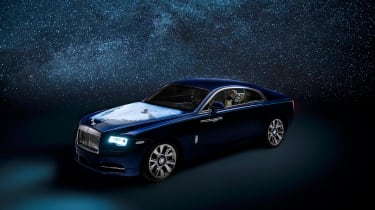 Rolls-Royce has pieced together a bespoke Wraith for one of its Abu Dhabi clients. It’s been christened “Wraith – Inspired by Earth”, and features a host of styling tweaks and artistic flourishes that focus on our planet’s position in the cosmos.

The bonnet of this unique Rolls-Royce Wraith features a piece of air-brushed artwork, which represents how the Middle East looks from outer space. The artwork took more than 100 hours to complete, and is set off by a bespoke emerald-green coach line that incorporates the Sun and the eight planets of the Solar System.

The rest of this one-off Wraith’s bodywork is finished in Royal Blue, representing the 75 percent of the Earth’s surface that’s covered by water.

Inside, Rolls-Royce has fitted Moccasin leather upholstery, which mimics the sands of the Emirates’ deserts. This is offset by Cobalto Blue accents and Emerald Green piping, mirroring the waterways and greenery of the world.

There’s also a unique veneer on the dashboard, which bears a photo-realistic air-brushed satellite image of the Middle East. A unique set of treadplates, and special graphics for the infotainment system displaying a silhouette of the Solar System, also feature. Finally, Rolls-Royce has installed a unique headliner, also embroidered with the planets of the Solar System.

Like the standard Wraith, the “Inspired by Earth” edition is powered by a twin-turbocharged 6.6-litre V12 engine, which produces 624bhp, and 870Nm of torque. Power is fed to the rear wheels via an eight-speed automatic gearbox, and Rolls-Royce says the 2.4-tonne luxury coupe will crack the 0–62mph sprint in 4.5 seconds.

What do you make of the Rolls-Royce “Wraith – Inspired by Earth?” Let us know in the comments section below…

2022 Honda Civic Sedan: Here's What It Could Look Like
Car Reviews Pagani Huayra BC Roadster Visualizer Creates A Video Of Your Build