Vauxhall will once again square-up to the Ford Fiesta ST, with hot new, pure-electric version of the Corsa VXR 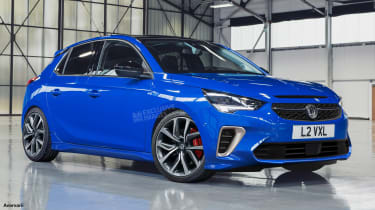 Vauxhall has confirmed that the Corsa VXR will return to UK showrooms by 2022, and it’ll be powered by a pure-electric powertrain. When it arrives, the new Corsa VXR will act as an alternative to the petrol-powered Ford Fiesta ST and Volkswagen Polo GTI, as well as a direct competitor for the sporty electric Cupra el-Born.

We haven’t had a VXR-badged Vauxhall since the last Corsa was axed in 2019 – and this new model will be a radical departure from the hot hatchback’s formula. The old torque-steer prone car’s turbocharged four-cylinder powertrain will be swapped for the 134bhp electric motor and 50kWh battery pack found in the standard Corsa-e.

Stephen Norman, the British brand’s managing director, told Auto Express that the new Corsa VXR would focus on suspension, braking and steering upgrades for its performance edge, stating “we have more than enough [power]. But, we can add performance in other ways.” 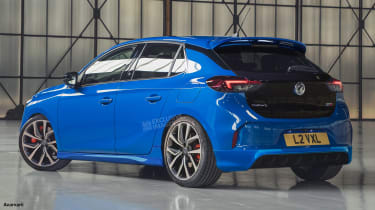 Despite this, the new Corsa VXR should be fairly spritely. The Corsa-e’s 7.6-second 0–62mph time isn’t too far behind the old Corsa VXR’s 6.8-second effort – and we expect the EV will be quicker from 0–30mph, as its electric motor can apply all of its 260Nm of torque from a standstill.

One thing Vauxhall will carry over from the old Corsa VXR will be its styling package. Our exclusive images give a good indication how the finished product will look – and, like its predecessor, the new hot hatchback will feature a deeper front splitter, larger alloy wheels,  a taller tailgate spoiler and an air intake above the front grille, as seen on the last Corsa VXR.

Vauxhall has already dabbled with a performance version of the Corsa-e. Back in 2019, the firm launched the world’s first pure-electric rally car, based on the EV supermini. The formula was surprisingly similar to that of the upcoming Corsa VXR – there wasn’t any extra power over the standard car, but Vauxhall fitted a range of chassis and handling upgrades.

Are you excited for the next Vauxhall Corsa VXR? Let us know in the comments section below…