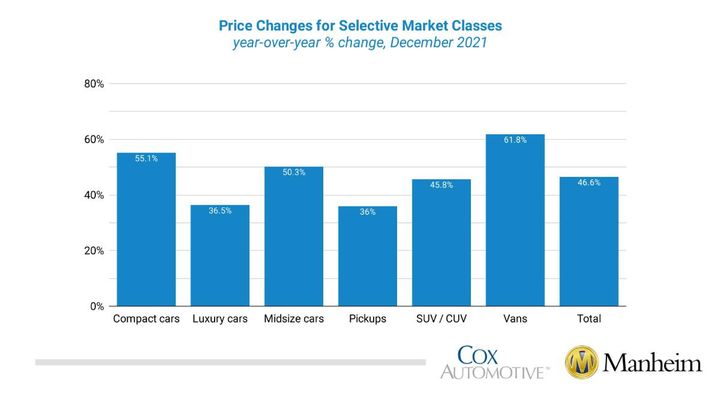 Wholesale used vehicle prices (on a mix-, mileage-, and seasonally adjusted basis) increased 1.6% month over month in December, bringing the Manheim Used Vehicle Value Index to 236.2, a 46.6% increase from a year ago, according to numbers release by Manheim on Jan 7.

The non-adjusted price change in December was a decline of 1.1% compared to November, leaving the unadjusted average price up 43.4% year over year.

Manheim Market Report (MMR) values saw weekly price decreases in December that accelerated in the final weeks of the month. Over the full four weeks in the month, the Three-Year-Old Index declined a net 1.7%. Over the month of December, daily MMR Retention, which is the average difference in price relative to current MMR, averaged 98.3%, which meant that market prices were behind MMR values.

On a year-over-year basis, all major market segments saw seasonally adjusted price increases in December. Vans had the largest year-over-year performance, while the pickup, luxury car, and SUV segments lagged the overall market. On a month-over-month basis, no segment saw declines, as compact and luxury vehicles outpaced the market and remaining segments.

Vehicle sales continue downward trend: According to Cox Automotive estimates, total used-vehicle sales were down 4% year over year in December. Cox estimates the December used SAAR to be 39.1 million, down from 40.6 million last December and flat compared to November’s revised 39.1 million SAAR. The December used retail SAAR estimate is 20.4 million, down from 21.6 million last year and flat month over month.

December saw mixed trends with consumer sentiment: Consumer Confidence according to the Conference Board increased 3.5% in December, and the November reading was revised up. However, in the underlying components, the view of the present situation declined slightly while the view of the future jumped 7.4%. Plans to purchase a vehicle in the next six months increased to their highest level since July. Plans to purchase a home also increased to their highest level since February. The sentiment index from the University of Michigan reported a 4.7% increase in December, with both underlying measures of current conditions and expectations improving. By contrast, the Morning Consult daily index saw a decline of 2.3% in December, with all the decline coming after Christmas.