Home » Car Reviews » You May Name-Drop These IARA Award Winners You May Name-Drop These IARA Award Winners

The International Automotive Remarketers Alliance handed out more awards than usual this year to a roster of business figures considered household names within the industry.

Because the Roundtable had to go virtual last year, and one award has two winners, the IARA gave out five established honors throughout the two-day event Aug. 25-26, in addition to other timely and notable recognitions.

Leading the winners pack are former KAR Global CEO and current Executive Chairman and Chairman of the Board Jim Hallett and former Cox Automotive CEO and current CEO of the Cox Family Office Sandy Schwartz, who each received the 2021 IARA Circle of Excellence Award.

The award, given out annually since 2003, celebrates industry leaders who have made outstanding contributions to improve the remarketing industry as well as the wider society.

Hallett and Schwartz received their awards following their headliner closing keynote session on Aug. 26 where they appeared with their successors, KAR Global CEO Peter Kelly and Cox Automotive CEO Steve Rowley, for a candid discussion about their industry experiences, backgrounds, and insights for the future of remarketing. IARA President Paul Seger handed out the awards. 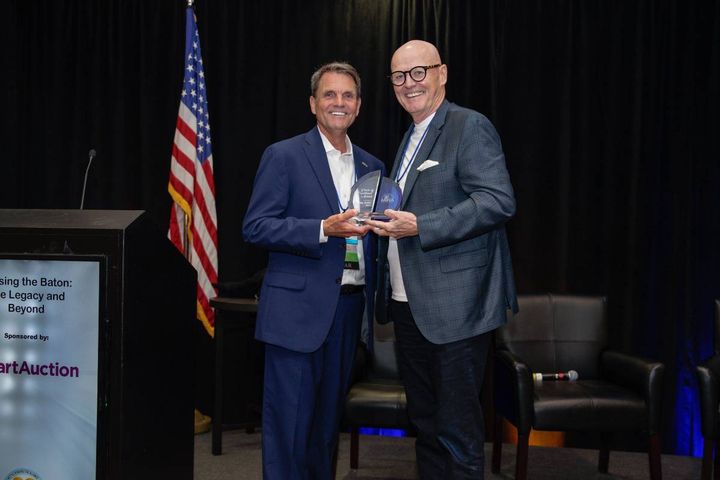 IARA President Paul Seger with KAR Global Executive Chairman and Chairman of the Board Jim Hallett.

Hallett, who has more than 40 years of experience in the automotive industry, still serves as executive chairman and chairman of the board of KAR Global (NYSE:KAR), where he advises the company on strategic and customer and investor relations matters. A native of Canada, Hallett joined the company in 1993 as president of ADESA Canada, and in 1996 relocated to Indianapolis to serve as president and CEO of ADESA. He was named CEO of KAR in 2007, chairman in 2009 and executive chairman in 2021. 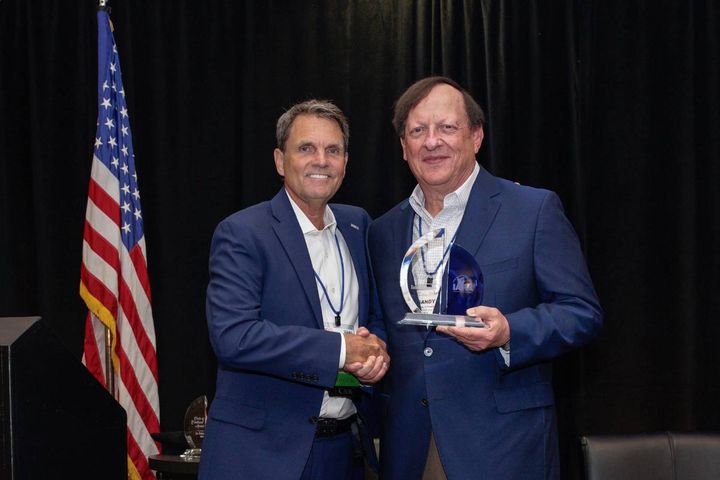 Schwartz, now the CEO of the Cox Family Office, works as an advisor to the Cox family, and leads the office in Governance, Trust & Estate Planning, Financial Planning & Analysis, and Family Services. He has spent 36 years with Cox Enterprises and the Cox family of businesses.

Before leading the Family Office, Schwartz was CEO of Cox Automotive. Under his leadership, Cox Automotive has assembled and integrated a family of brands that together make car dealers more successful and car buyers more satisfied, including auto industry leaders such as Autotrader, Dealer.com, Dealertrack, Kelley Blue Book, Manheim, NextGear Capital, vAuto, and Xtime.

Before leading the auto businesses for Cox Enterprises, Schwartz led the media businesses as President of Cox Media Group. Businesses he has led include: the Austin American-Statesman, the Atlanta Journal-Constitution, Tribune Newspapers of Arizona. Schwartz also was vice president of business development for Cox Enterprises. During his career he has fostered a family-first ethic and an open, honest, and direct culture. Cox, a privately-held, family-run company, has $21 billion in revenue and 55,000 employees. 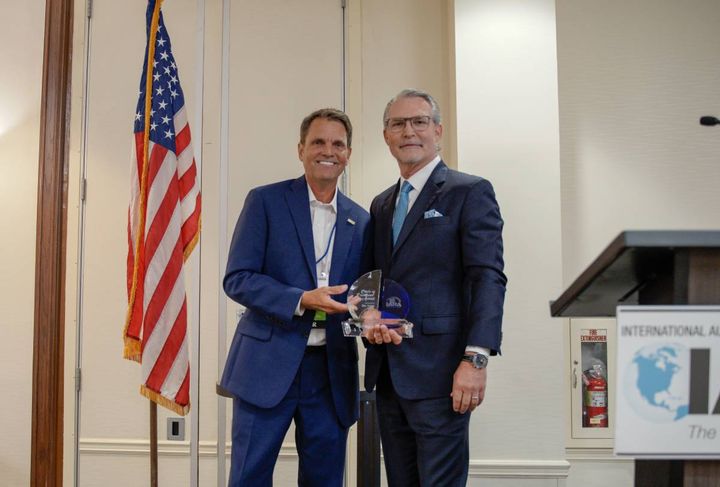 Although Ben Lange, the CEO and President of America’s Auto Auction and Auction Credit Enterprises, was named for the award in 2020, he was able to receive it this year in person from IARA President Paul Seger.

The IARA also formally recognized the winner of the 2020 Circle of Excellence Award, Ben Lange, the CEO and president of America’s Auto Auction and Auction Credit Enterprises affiliate floor plan company. Lange did not formally receive the award last year because the Summer Roundtable was not held as a live in-person event.

Lange began washing cars at his family’s Ford dealership as a boy in the 1970s and then worked in sales and marketing during the first phase of his career. He discovered his true passion for used cars in 2000, which led to two decades and counting in the remarketing industry. He became CEO of AAA in 2015 and joined the company as an executive in 2006.

“I’m just the tip of the iceberg at AAA,” Lange told a lunchtime audience in accepting the award. “It’s the people underneath who make it all happen. Thank you to the AAA team for a wonderful journey.” 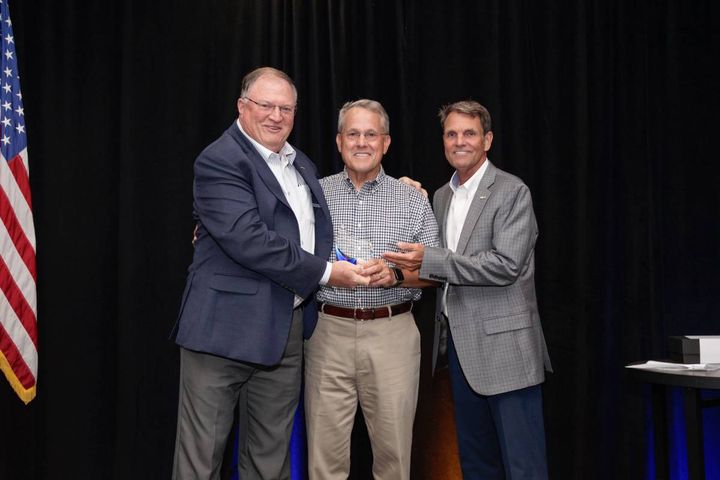 The 2021 Remarketing Industry Recognition Award was given to Frank Hackett, the retired CEO of the National Auto Auction Association.

Hackett began his career in law enforcement and criminal justice, eventually becoming the elected sheriff of Kennebec County in Maine that includes the capital city of Augusta. He later worked for a children’s charity before entering the remarketing industry and served as CEO of NAAA from 2004 to 2021. Hackett expanded the organization’s footprint and built strong bonds with related industry groups, including the IARA. He also led political action committee and education efforts at NAAA.

“I appreciate how you’ve treated me and made me feel welcome,” Hackett told an audience after accepting the award. “The NAAA and IARA partnership has never been stronger. I’m fortunate to have worked aside so many wonderful people and I’m proud to share this award with all of you.” 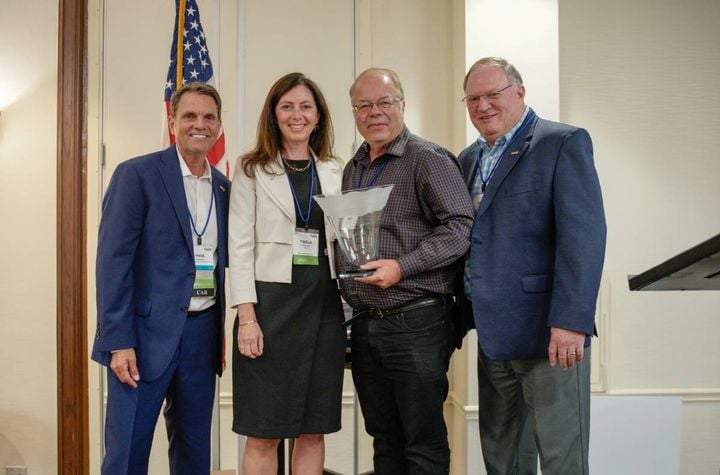 The award is named after Antich’s former boss, Ed Bobit, who founded Bobit Business Media in 1961 with the flagship Automotive Fleet title and in the ensuring decades built up the company into the largest fleet media publisher that now spans more than 20 magazine brand titles and 25+ conferences, trade shows, and events. Bobit, who passed away in June 2014, led and worked at his company well into his 80s. His last column appeared in the April 2014 edition of Automotive Fleet.

Antich, who joined Automotive Fleet in 1985, has written and edited more than 5,000 articles in his career. A well-known industry speaker and authority, he was inducted into the Fleet Hall of Fame in 2010; served as president of the Automotive Fleet Leasing Association in 2008-09 and again in 2021-22 in addition to being a longtime board director; and as IARA Secretary and chairman of the public relations committee. He helped start IARA 20 years ago and has contributed to its growth and development.

“I wasn’t involved with IARA since Day 1, but since Day 2,” Antich told an awards luncheon on Aug. 26. “I’ve spent 20 years watching the IARA grow and it’s been one of the highlights of my career, watching this industry start from a small group of people and becoming an influential voice of the consignor industry. The best days are ahead for the alliance. I see the future in the next chapter of this alliance growing our collaborations with the NAAA and NIADA.” 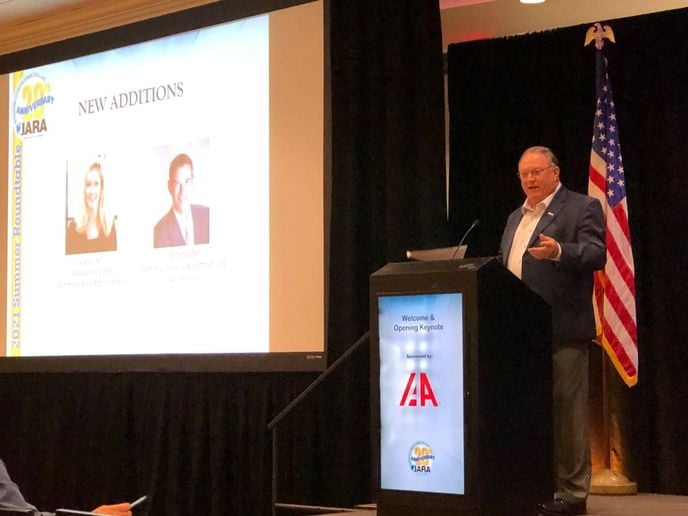 Tony Long, the executive director of the IARA, received one of the industry’s most prestigious honors on Aug. 24 from the National Independent Automobile Dealers Association, which was holding its annual convention and expo one block from the site of the IARA Summer Roundtable in San Antonio. Long became the 32nd and newest member of the NIADA Ring of Honor, considered the NIADA’s highest award for non-dealers, as reported by Auto Remarketing.

The NIADA recognized Long for being a longtime leader and innovator in the remarketing industry. The Ring of Honor elevates allied industry leaders who have contributed to the professionalism and growth of the automobile industry through outstanding performance and leadership, according to Auto Remarketing.

A former president of the National Auto Auction Association, Long joined the IARA as its executive director in 2013. 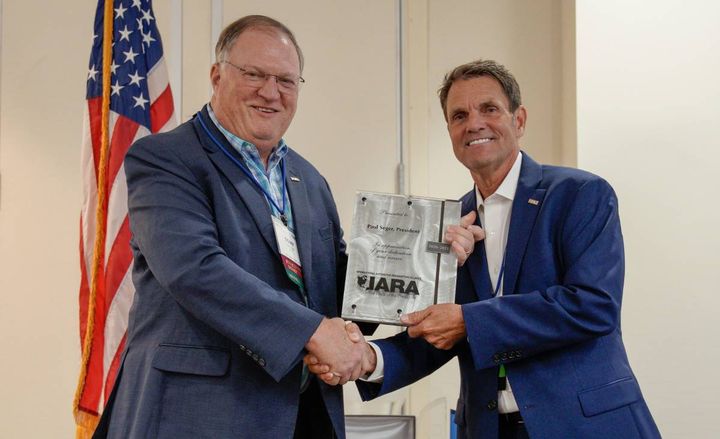 Paul Seger was honored for his two-year term as IARA President that spanned 2019-2021, one of the most difficult periods for the alliance due to the economic disruptions of the global pandemic. He was praised for leading an organization that increased membership and boosted its finances during challenging times.

In accepting the award, Seger, the executive vice president and general manager of Element Fleet Management Inc., said, “It’s been humbling to be part of this group. I came into this not knowing what to expect, but I knew it was time to give back to this great industry we’ve all been part of. It’s a great honor to be part of this organization for the last two years and I look forward to continuing to support it as the new president gets the baton.” 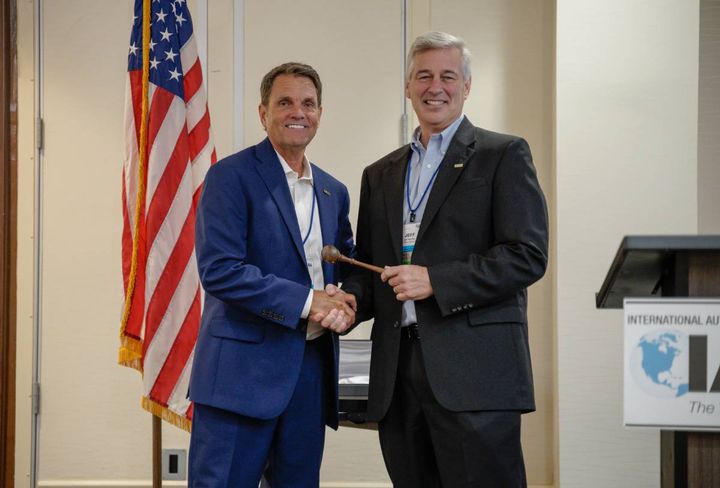 IARA Presidential handoff: Paul Seger (L) steps down after a two-year term and hands gavel to Jeff Bescher, who serves 2021-2023.

That new president, Jeff Bescher, the president of Strategic Marketing Solutions Inc., was officially handed a giant gavel to mark the beginning of his two-year term. Bescher told the audience, “Paul has talked a lot in the last 12 months about how we’ve had to adjust the way we function because of the COVID pandemic. Josh Linker talked about the speed of change and innovation that we are all facing every day much more than before. I think in the last three the IARA especially under Paul’s leadership has gone through a significant evolution, and it’s very similar to what our entire industry is undergoing. My vision is to ensure that the IARA as the voice of the consignor not only influences the changes that are happening, but actually drives the evolution of the remarketing industry. I’m honored to be asked to lead such a great group of people who volunteer their time to make this happen.”