A Maserati Quattroporte You Probably Haven’t Seen Heads to Auction

The fifth-generation Maserati Quattroporte may have landed in the U.S. with a bang in 2003, offering a stylish alternative to plutobarges from Germany and Japan, but its exclusivity (and residual values) were quickly diluted in the years that followed, thanks in no small part to eye-watering depreciation and expectedly finicky electrics. The big sedan may have signaled a return for the marque, which had been stuck with aged facelifts of its coupe and cabriolet, but it also served as a reminder of earlier eras of Maserati.

But in order for there to have been a fifth-gen model for sale stateside, there had to have been a fourth-gen model before it. The U.S. certainly did not receive it, and in practice few other countries did either. That’s because the fourth-gen Quattroporte was a much smaller-volume effort—what would be called “artisanal” or “batch-made” today. And it still remains a rare sight on both sides of the Atlantic.

But in a few weeks Artcurial Auctions will see one of these rare machines roll across the auction block, when a 1995 Quattroporte is offered at no reserve at its Automobiles sur les Champs sale.

Just what does this generation of the Quattroporte offer? 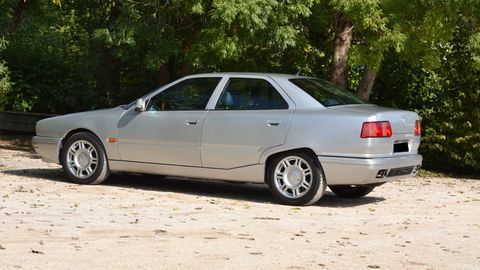 A stylish suit by Marcello Gandini, for starters. Still, the design does not completely hide the Biturbo lineage underneath the skin, which in its later years included even rarer machines such as the Shamal, Ghibli and Karif. The sharp angles of those models had mellowed out by the time Maserati, now under control of Fiat, sought to field a luxury sedan version to give the platform a send-off. This explains why this Quattroporte is not particularly large—it’s about the size of a BMW 5-Series of the time.

First shown in production form at the 1994 Turin motor show, the fourth-gen Quattroporte debuted with twin-turbocharged 2.0- and 2.8-liter V6 engines at first, and received a 3.2-liter V8 only a couple of years into its production cycle. Notable for what was ostensibly an executive car, six-speed manual transmissions were standard across the range, with ZF four-speed automatics being offered as an option.

The fourth-gen model was beefed up with hundreds of new components after Ferrari took a 50% stake in the automaker. That occurred three years after production began, reengineering the sedan and updating the model with the Quattroporte Evoluzione name. But production still amounted to just hundreds of units per year, with the final tally amounting to about 2,400 cars by the time this sedan exited production in 2001. 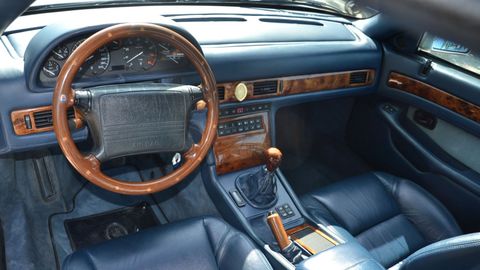 The version that Artcurial will offer later this month is equipped from the base twin-turbocharged 2.0-liter V6 engine, good for 287 hp, paired with a six-speed manual transmission, which is how a lot of the early units sold in Italy were optioned. The car was supplied to Milan from new, and now shows just over 121,000 kilometers, which is just over 75,000 miles. The auction house notes that the car has been resprayed in its original metallic Grigio Silver color, and features blue leather and Alcantara in the same color. The sedan reportedly received a major service in 2016 to the tune of about $5,200, which was only about 3,000 kilometers ago. The car will be offered with a service booklet, tool kit, jack and on-board manual.

This range is about where the best examples trade, and as you may have guessed by now the values of fourth-gen Quattroportes have stratified some time ago. The most neglected examples are largely off the road, leaving the scuffed but generally well-running examples, or those babied from new. As you may have also guessed by now, 121,000 kilometers or just over 75,000 miles is “high mileage” for these cars. A big chunk of the production run had sold new to Italy and stayed in Italy, accumulating modest mileage as a wealthy family’s touring car for trips from the big city to the lake country, or perhaps an executive’s commuter that saw plenty of use for the first three years and then was retired. 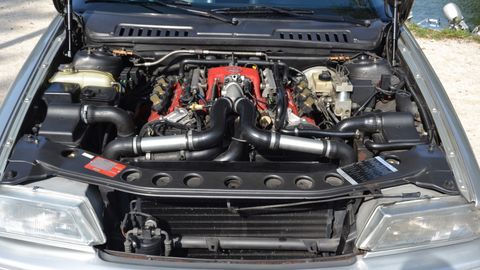 The fact that this example is an early car with the smallest engine may not matter as much as it had a couple of decades ago: The market for these is now concerned more about preservation and service records than V8 power. Speaking of preservation, a respray in the case of this car may not be surprising given its mileage, as Maseratis of the time were not known for the resilience of their paint.

Will the fourth-gen Quattroporte find (collector) fans on this side of the Atlantic now that these earlier examples are importable, thanks to the 25-year-rule? That remains to be seen. But this could be just the ticket into a concours event in the near future, likely for not much money at all.

Sign up for comments and let us know your thoughts about this generation of the Maserati four-door.