Audrain Concours and Motor Week Comes Back Healthier Than Ever

Among all the events canceled last year was one that had just gotten on its feet, or wheels, rather: the Audrain Concours. Associated with the Audrain Museum in Newport, Rhode Island, the event came back strong and seems to have grown bigger.

The car count in the Concours, which is just the final event in four days of four-wheeled fun, grew from 98 cars in 2019 to 180 in 2021. The total car count in the Tour was “several blocks long, maybe a half a mile,” according to one witness. The Gathering was another delightful afternoon on the lawn overlooking the ocean. And there were seminars galore, featuring automotive luminaries from Jay Leno to Mika Häkkinen, Johnny Rutherford, Wayne Carini, Pixar’s Jay Ward, McLaren CEO Zak Brown, pioneering woman race car driver Lyn St. James, Tesla and former Mazda designer Franz von Holzhausen, and Audrain’s own David Donohue and CEO Donald Osborne. All set among the mansions of the Great Gatsby era on the rocks overlooking the ocean between Block Island Sound and Buzzard’s Bay.

One of the seminars, for instance, was on hot rodding. It was a chance to showcase some of the East Coast Rods that don’t get as much exposure as those of the other coast.

“The hot rod seminar was fun,” said host Ken Gross. “Jeff Goldstein, Jerry Lettieri, and I told tales of early New England hot rodding and street racing. Wayne Carini and I spoke about the Hirohata Mercury, and Wayne kindly let me drive it for half an hour. The local hot rod crowd were there in droves, and the Audrain exhibition, with famous cars from Paul FitzGerald and Fred Steele, courtesy of Ross Myers—and the Norm Wallace and Fran Bannister roadsters, owned by Larry Hook, made for a great exhibition.” 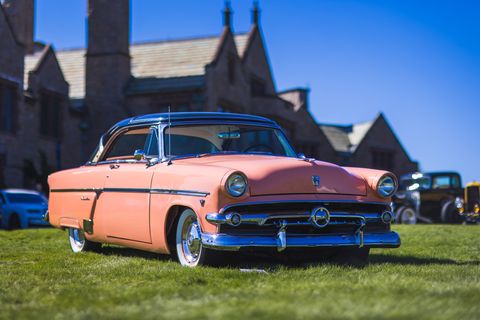 “I am proud to say we exceeded even our own expectations for this year’s event and are thrilled with the outcome,” said Osborne, whom you surely know from the Assess and Caress segments of Jay Leno’s Garage. “It is all about bringing car people together to share their stories and create new memories that will last a lifetime. We are delighted that we could share the island we love with everyone and continue to establish our place in the global concours world.”

The world may be ready. The Audrain is conveniently located halfway between New York City and Boston, on what is called Aquidneck Island, where tycoons and titans chose to build their summer “cottages” in the era when big money wasn’t taxed and you could concentrate wealth like a proper robber baron without having to worry about backlash on social media.

Most of the mansions were built from 1850 to 1900 and included names like Rosecliff, Marble House, the Elms, and Chateau Sur Mer. The biggest and best of them is The Breakers, built by Cornelius Vanderbilt II, president and chairman of the New York Central Railroad. He built it as a summer retreat for his large family. It is The Breakers that is home to the Audrain Concours, with cars parked on the sprawling lawn between the main house and the sea.

The Audrain Concours continues to improve the quality of the cars it picks, and this year saw a higher percentage of Pebble-worthy entries vying for attention from judges and attendees alike. Having said that, this year’s Best of Show was a bit of a surprise, going to a truly uniquely shaped 1953 Abarth 1100 Ghia. Like it or loathe it you won’t see anything similar anywhere else. That gray paint and that snout, for instance, will be topics of conversation in Newport for some time to come. 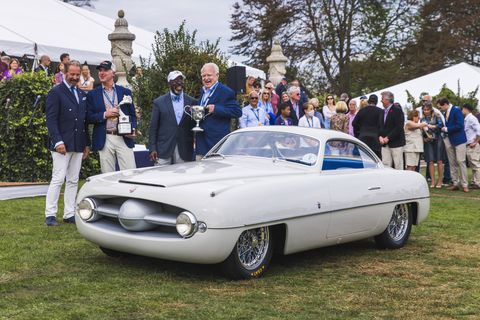 Other winners were more traditional Concours cars. Among the other special awards given were the Chairman’s Choice prize to Pete and Merle Mullin for their 1951 Delahaye Model 235 Cabriolet. The Founder’s Choice trophy was presented to Jim and Nancy Utaski for their 1965 Aston-Martin DB-5 Convertible. The People’s Choice award, chosen by the nearly 3000 attendees, was presented to Phil Castaldo for his 1963 Z06 Corvette.

There was more to Audrain than the Concours on Sunday. Thursday, September 30, was the opening of the Concours Village at the International Tennis Hall of Fame in Newport that opened its gates to the public for all four days of the events and included an area for families to relax. Thursday was also the start of Audrain’s seminars, which were held throughout the week. Thursday night was also “Wine By The Water” and the “Hilltop Hangout,” both great places to talk cars.

Friday was The Gathering, an upscale lawn party held at another mansion, called Rough Point. That was followed by another Hilltop Hangout and a Bonhams Auction at the Concours Village in the evening.

Saturday was the Audrain Tour d’Elegance, with classic cars parading through Newport and environs, followed Cars & Coffee, then the Bellevue Car Display on Bellevue Avenue and finally Audrain’s Annual Fundraising Gala where no less than Kenny Loggins entertained.

And then Sunday was the Concours. So start planning to attend next year’s big week. The next Audrain’s Newport Concours d’Elegance will be held on Sunday, October 2, as a part of the 2022 Concours and Motor Week beginning on September 28. 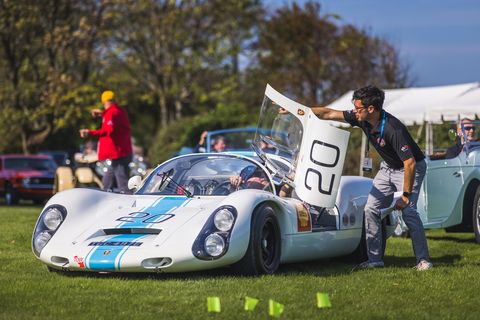 “The second Newport Audrain Concours had many great cars, with participants like Judge Joseph Cassini, Merle Mullin, Ted Zamjahn, Paul Gould, Rob Kauffman, and many others,” said Gross. “It was an impressive show.”

Along with the more-established Greenwich Concours, the Audrain promises to rival other East Coast car culture events like Amelia Island and Cavallino Classic. In another 50 or so years, if all goes well, it could rival Pebble.

US: Mitsubishi Outlander PHEV Sales Up In Q3 2021