BMW Z1 with 12 Miles on the Clock Heads to Auction

For all the innovations that were offered by the BMW Z1, the roadster remains relatively unknown North America. The plastic-bodied model had a number of tricks up its sleeve, including drop-down doors and giving the owner the ability to change its exterior color by swapping out removable body panels. Even three decades after it debuted it’s still hard to believe that the Z1 was’t just a concept car, built for an auto show to show off an array of futuristic features and then never seen again.

This was a car you could buy in Europe just by walking into a dealership.

In a couple of weeks bidders unfamiliar with the model will get a chance to pick up an example that’s as close to brand new as possible, when Bonhams offers a Z1 with just 20 kilometers, or 12.4 miles, on its odometer at its Le Zoute sale.

How did the Z1 come about?

The model was first shown in Frankfurt in 1987, showcasing a so-called internal skeleton construction method with molded plastic body panels on the outside, a galvanized steel chassis underneath, and a molded composite under tray. The car could be driven without the plastic body panels even attached, though the more practical selling point was to allow owners to purchase a second set in a different color to swap out as desired. Doors that dropped down into the door sills and high-set mirrors added to the concept car-like feel of the design, which was unusually sleek and small for BMWs of the era. 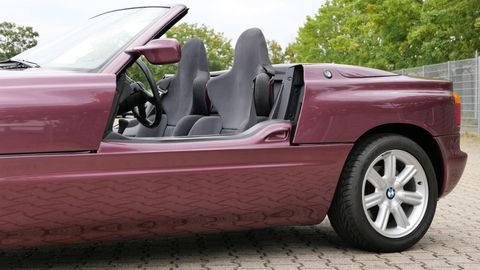 As futuristic as the Z1 was on the outside, one of the things that allowed BMW to indulge in the project was the use of E30 running gear underneath, with the Z1 being powered by the familiar overhead-cam straight-six plucked from the 3-Series, along with a five-speed manual transmission. This gave the roadster plenty of power for the day with 170 hp to play with, along with a 140 mph top speed.

“Production began slowly in 1988 at the rate of six cars per day, ending in 1991 after 8000 units had been built. Demand was strong from the start despite a high price, and today this landmark model continues to be highly sought after by BMW collectors,” the auction house adds.

This particular 1991 example is finished in the rare Magic Violett metallic color, said to be one of just 228 out of about 8000 examples finished in this color. Bonhams reports that this car was delivered new to an owner in Germany who, instead of driving it, displayed it indoors at the entrance to his own office, and the car was not actually registered until 1996. The auction house also mentions that an oil change and a door repair (presumably for the elevator chain, which is a common issue) was performed by the current owner. 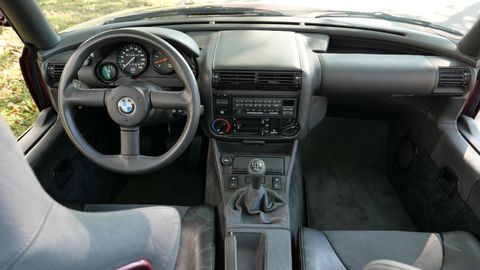 Obviously, the bulk of the value of this Z1 rests in its delivery kilometers, as garden variety examples rarely break through the $50,000 barrier. Otherwise, if one were to buy it to be driven, some fairly pricey recommissioning work could be needed including the replacement of a number of rubber parts that may not be all that easy to find or refurbish today.

The reason we could be seeing this car come to auction now, after 30 years, is that the Z1 is seeing a modest resurgence in interest from collectors, even if those collectors are still on the other side of the Atlantic and have their choice of well-exercised examples to actually drive. The attrition rate for the Z1 has been quite low, as you would expect, so most are still around with modest miles. It would probably be hard to find an example with over 100,000 kilometers on the clock.

We also have to wonder about its investment potential. What, precisely, is the audience for a delivery-mileage Z1, and what will that audience be in another 10 years?

For all of its life the Z1 has been considered something of a toy, so the number of examples with low miles is actually pretty generous. Most buyers of delivery-mileage cars, however, tend to be buy them as investments, and the potential for growth of this one is…murky at best, especially compared to other fairly safe bets.

Do you think the Z1 will significantly appreciate in value in the next decade or so? Let us know in the comments below.