Parnelli Jones’ name is equated with speed, as in, “Who do you think you are?” And over his storied racing career, he won in Indy cars, stock cars, up Pikes Peak, and across Baja in some of the world’s biggest off-road races.

And now, two of Parnelli Jones’ most iconic race cars are coming up for auction in May, and you may never get another chance to own such great race cars.

Mecum’s Original Spring Classic Indy is where you want to be May 14-22 to bid on these and a few other Parnelli cars. These may be the last ever auctioned from Jones’ once-formidable collection. Some of that collection is now in the Indianapolis Motor Speedway Museum and other cars have been sold off over the years in private sales, so these may be all you’ll be able to get from one of America’s greatest and most versatile drivers.

“With Oly, everything’s in great shape, everything,” said Jones’ longtime manager and business partner Jim Dilamarter. “We had it tuned up six months ago with new plugs, filter, rear end fluids, and new seals in the axles.”

Could the new owner actually take it out in the desert and run? Sounds like.

“Everything’s good on it, and if there was such a thing as vintage off-road racing you could actually run it.”

The story behind the Bronco is pure Parnelli. As you may recall, Jones turned down the offer to drive a Bronco in Baja when legendary team owner Bill Stroppe first asked him. So Stroppe, knowing how to goad the manly Jones into doing something, said that maybe Jones wasn’t man enough to race in the desert.

“It was like showing a red cape to a bull,” Jones said. 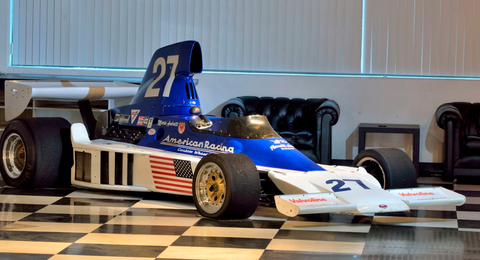 After a poor showing in a stock Bronco the first year, Jones designed the tube-frame, fiberglass-bodied beast you see here. Yes, that’s a wing on top, adjustable by a big handle from inside the cab. The Bronco is powered by a Ford Windsor V8 that made 390 hp and the whole rig weighed only 2,620 pounds. With Stroppe as a co-driver—basically yelling at the foaming Jones to slow down and not destroy the truck—the pair won the Baja 1000 in 1971 and ’72, as well as the Baja 500 and Mint 400 in 1973.

Another lot is the Vel’s Parnelli Jones Racing VPJ-4, driven by Mario Andretti in F1 in 1975. The car had some respectable results: third at Silverstone, fourth in the Swedish GP, fifth in the French GP, and it lead 10 laps in Spain.

“It’s the last F1 car of the three we built and it has the best record of the three cars,” said Dilamarter, who ran the F1 operation for VPJ. 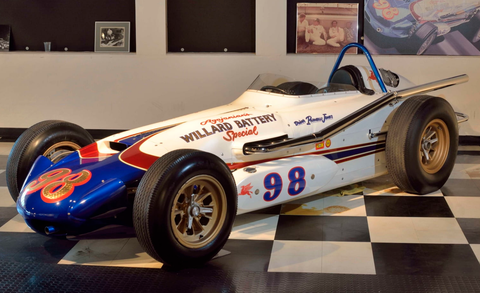 Unfortunately, the car was designed to run on Firestone tires and when Firestone pulled out of racing, the team was left having to modify the car to run on Goodyears, as well as to find new sponsors. This would be a blast to race at vintage events, though.

There is also a replica of Parnelli’s famous Old Calhoun on the block, the 1960 Watson Offenhauser, this one built by vintage Indy car expert Chris Paulsen. The original Old Calhoun is the car Jones drove to victory in the 1963 Indy 500.

If your budget is a little constrained, Jones is also selling a couple of “Parnelli Jones” Saleen Mustangs, the product of a deal done with entrepreneur Steve Saleen in 2007. You can even bid on Page Jones’ 1994 Mustang SVT Cobra Pace Car Edition.

And those are just the Parnelli cars. The Mecum auction will have 2,500 other cool offerings up for sale, from a 1936 Duesenberg Model J Rollston Convertible Berline to a 2020 Ford GT. Surely there has to be something among those for you.