If you’ve been itching for a new Subaru BRAT-style pickup, but want an electric one on top of everything, you may be in luck in 2023. That’s when EV startup Alpha Motor Corporation—which we already know for its retro-styled electric coupe concept—plans to put a pocket-sized truck into production, aiming to build out a three-model lineup that will also include the Ace coupe and the Jax crossover. 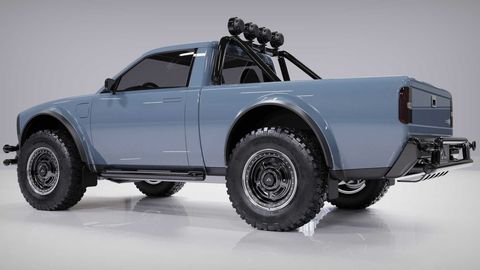 The Wolf may not be all that large, but its planned specs suggest something more than a toy. Alpha plans to offer a battery good for 250 to 275 miles of range, with a choice of front- or all-wheel drive. It also promises the Wolf will tow 3,000 pounds, while offering not only a 5.5-foot-long (65 inches long, 59 inches wide) bed for cargo, but also a “frunk,” or front trunk. The truck is expected to use the same skateboard platform as the company’s other two models but will be quite a bit longer than the retro-styled coupe, measuring 188 inches from front to back.

The interior, meanwhile, will be minimalist and appropriately modern, with a (now mandatory) vertical touchscreen for just about all controls, and seating for two. The cargo bed will also have a tool storage compartment right behind the cab, so it will offer quite a bit of utility in addition to its usable bed. Items like a roll bar with lights could be extras, we suspect, along with the front push bar and knobby tires.

Even though we don’t know the power specs of the planned model just yet, the most ambitious number attached to the Wolf at the moment is a planned $36,000 base price, prior to any incentives. The top version, meanwhile, will only stretch to $46,000, so the Wolf may not even overlap with most other EV trucks that will be on the market by that point in time.

Needless to say, a starting price of $36,000 would be very ambitious even for an established EV player with existing factories and other models on the market; picture Nissan using the Leaf’s underpinnings for a trucklet, for instance, a plaything making use of existing EV hardware that doesn’t have to make money by itself. 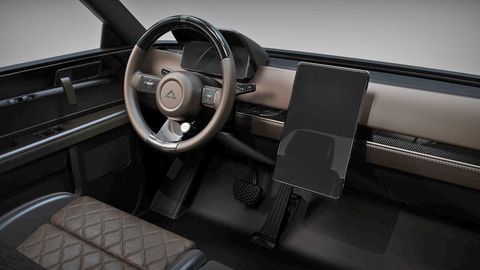 Alpha has three planned models and no running production line at the moment, meaning a lot of things have to go right for a $36,000 electric pickup to materialize in 2023. The company is accepting deposits for the Wolf right now, so you can get in line and start sending good thoughts for everything to fall into place.

If all does go according to plan, the Wolf will represent quite a shift from the massive and massively priced electric pickups that will begin arriving on the market starting in late 2021, from the Hummer EV to the angular and handmade Bollinger model, both of which will break through the $100,000 barrier in top spec. The Wolf may effectively have its segment all to itself if it arrives in 2023, because no other automaker has planned something so small and inexpensive. All it needs to do now is materialize as promised.

Would you rather have a smaller EV pickup than a larger one, like the Hummer or the planned Ford F-150 Electric model? Let us know in the comments below.

BMW reveals next-gen iDrive with Operating System 8 – first debut in the iX later this year, followed by the i4 – paultan.org