Mercedes-Benz took the wraps off a concept electric van earlier this week, previewing a model that’s slated to enter production soon. The Concept EQT previews the electric twin of the T-Class, which is the family version of the commercial Mercedes Citan van used by tradespeople and small businesses.

“We are expanding our portfolio in the small van segment with the forthcoming T-Class. It will appeal to families and all those private customers, whatever their age, who enjoy leisure activities and need a lot of space and maximum variability without forgoing comfort and style,” said Marcus Breitschwerdt, head of Mercedes-Benz vans. “The T-Class provides them with an attractive introduction into the world of Mercedes-Benz. And as the Concept EQT shows: We are consistently implementing our claim to leadership in electromobility and will also be offering a fully electric model in this segment in the future.”

Slated to be offered in five- or seven-passenger form, the production version of the EQT will be positioned below the electric EQV, which Mercedes revealed some time ago, and which is based closely on the V-Class. The Concept EQT is proportioned a little differently from the traditional minivan models in the US market today with an overall length of 194.6 inches, making it almost a foot shorter than then Chrysler Pacifica and the Honda Odyssey with its relatively short rear overhang, but features a noticeable taller cabin and roofline. That’s perhaps a vestige of the Renault Kangoo van which shares its CMF-B platform with the Mercedes T-Class, giving the Concept EQT a short nose and a rather large windshield. 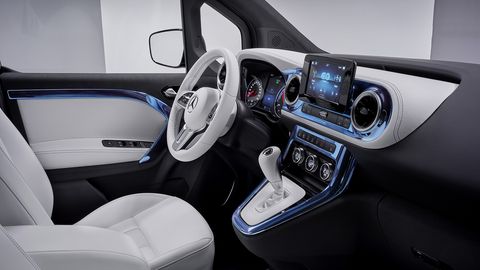 “The Concept EQT gives an outlook on how space and maximum variability can also be combined with stylish comfort in the small van segment,” Breitschwerdt added. “Our future T-Class is a true multi-talent and with it we will attract new customer groups and grow sustainably.”

The production version of the EQT, which is previewed here pretty closely, won’t be just a commercial van with seats as Mercedes has lavished this concept with Nappa leather, the latest infotainment system with voice controls, and a generous but not too generous infotainment screen. Just about the only vestige of the model’s commercial van roots inside is the gear shifter, which still sits high on the center stack peninsula, like in many European passenger vans, and takes up a tremendous amount of room for something that’s supposed to be electric. It could migrate to the steering column, as it has in many current gas-engined Mercedes models, but it’s a somewhat amusing reminder of what one would see in a gas- or diesel-engined Kangoo van with a manual transmission. 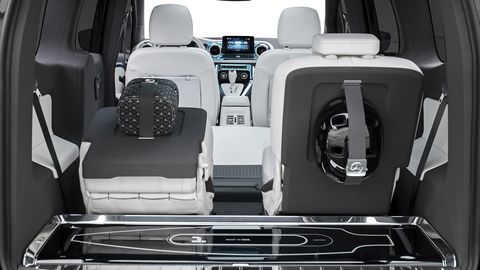 One thing Mercedes hasn’t shared so far are the specs for the battery and electric motor that will go into the production version, but it could well end up being identical to the setup seen in the electric Renault Kangoo, which features a rather modest 44-kWh battery, giving it a range of 165 miles in the WLTP cycle.

Needless to say, 165 miles is not exactly a record range at the moment by any stretch, and it won’t be in 2022 either when this electric Mercedes model is scheduled to arrive. And that’s perhaps why we won’t be seeing it here.

Minivans could well be one of the last segments to see a meaningful variety of electric models debut in North America, because at the moment no automaker is touching this segment when it comes to EVs.

Should Mercedes offer one of its electric vans here next year, or would the demand be too niche for such a model, compared to SUVs and crossovers? Let us know in the comments below.

What Modern Car Has the Best Roofline?
Car Reviews