The electric truck’s UI and other upcoming features we have yet to see are revealed.

We now have an idea of what the Tesla Cybertruck’s user interface (UI) will look like thanks to a patent filed today by Tesla with the United States Patent and Trademark Office (USPTO). The patent images and a link to the website were posted on Twitter by AMuchVaccinatedFace.

The images on the USPTO website basically show most of the Cybertruck’s UI design. The images are unfortunately a little dark and in black and white. Although, we get a look at what the Cybertruck’s final design might look like, which looks about the same. 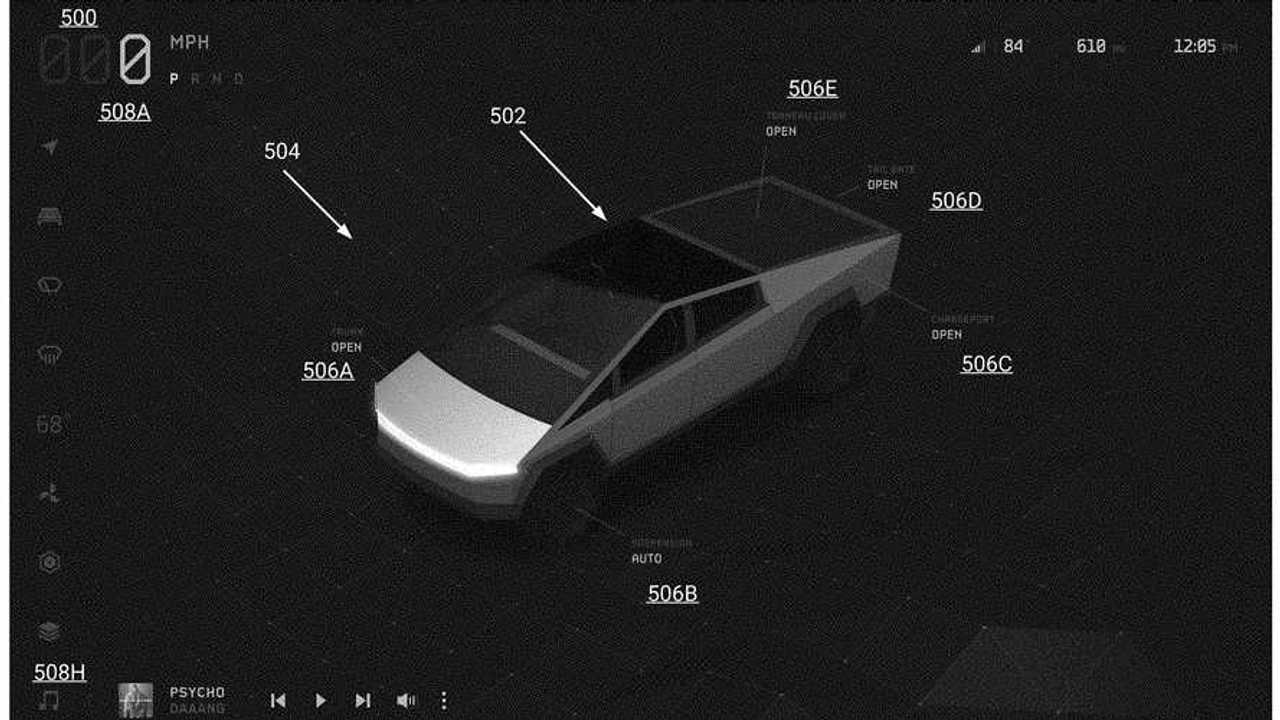 Most of the images of the UI show a driving range of 610 miles in the upper right part of the screen. The tri-motor model is supposed to have 500+ miles of range. Next to the range is the outside temperature and clock.

If you scan through the gallery of images from the patent application below, you will see many things including the streaming music screen, the vehicle controls menu that shows ride height adjustment and drive modes, the fan menu, and three graphics showing the HVAC airflow direction. There is also an image of a home screen that shows the weather, your calendar, and news. 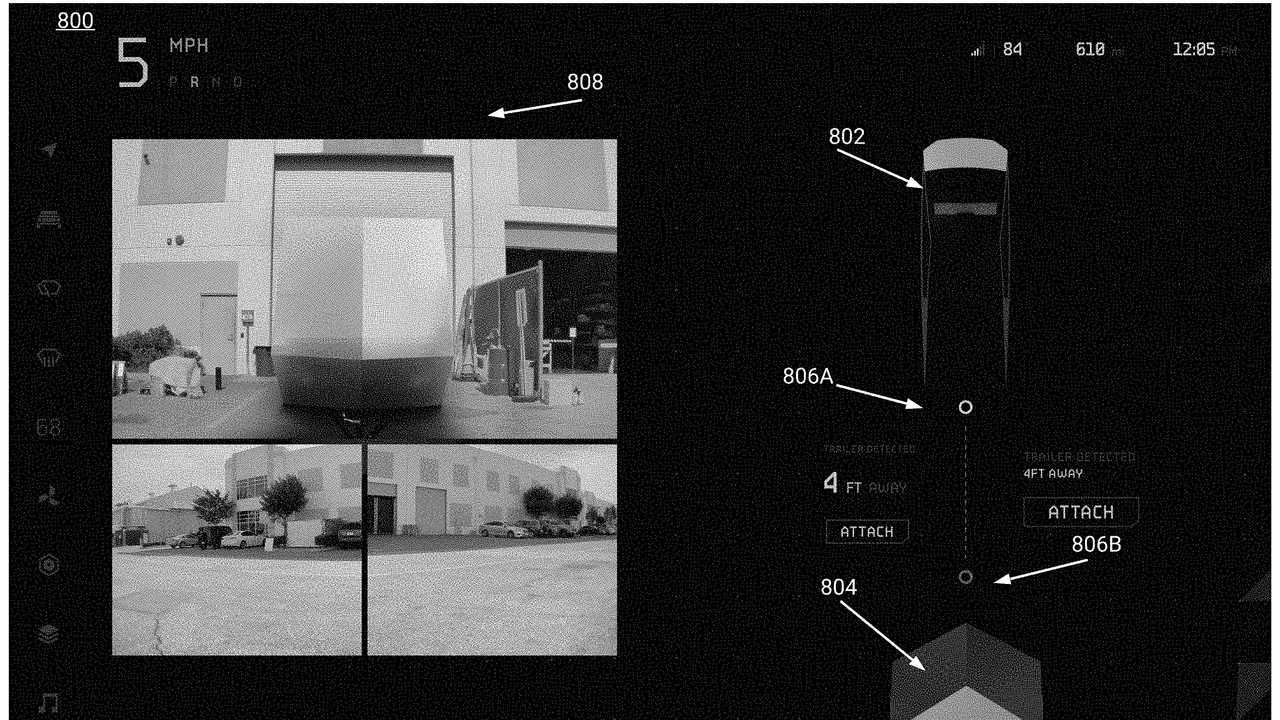 Two of the patent images involve towing. One shows what looks like a tow assist feature that helps drivers attach a trailer to the Cybertruck. If you look at the trailer in the image, it almost looks like a unique one designed specifically for the electric truck (could Tesla offer a Cybertruck trailer later in production?). The other towing image shows what appears to be a camera showing the driver’s blind spot while towing a 20,000-pound trailer (maximum capacity is 14,000 pounds). 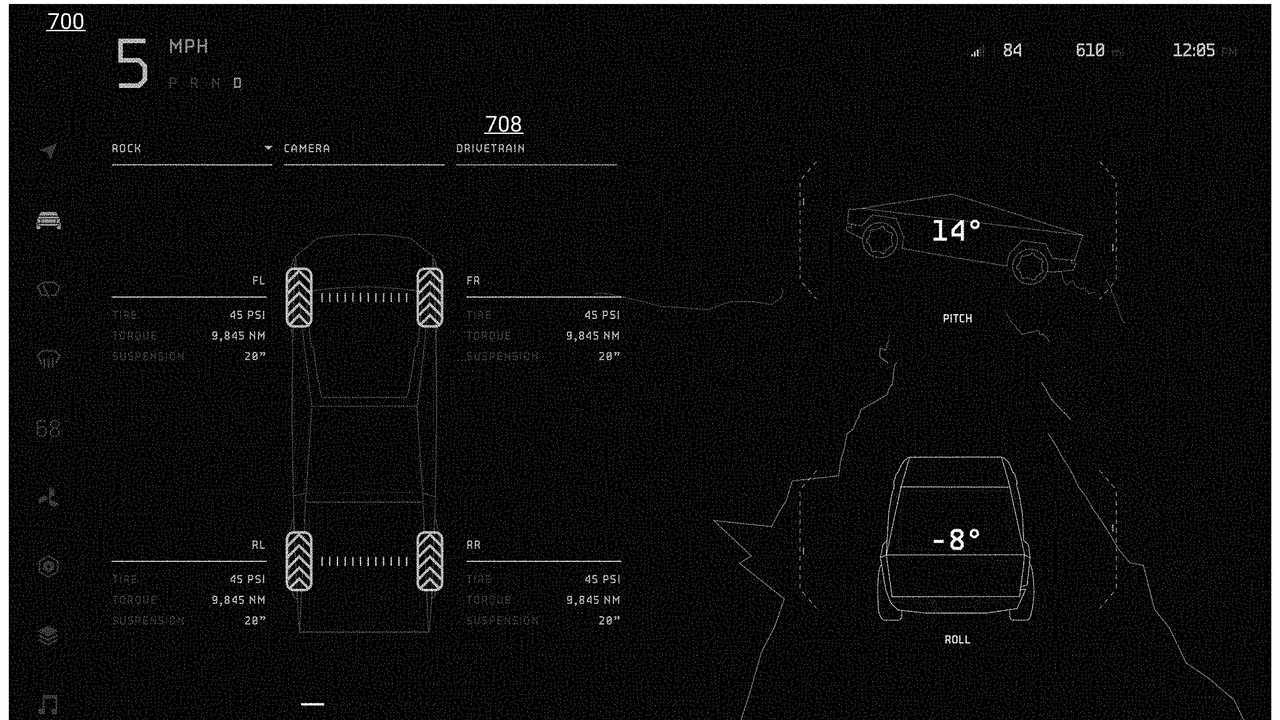 We also get a sneak peek at the charging screen that shows 32 percent battery left with 112 miles of range. There are two off-road screens, one shows the outside cameras, and the other shows tire and suspension information. Both off-road screens show pitch and roll gauges as well.

One of the coolest images shows what looks like a bed camper with a rad-looking pull-out kitchen that features a stovetop and counter space with storage. I wonder if buyers will opt for this or for the CyberLandr camper. The pull-out kitchen seems similar to the Rivian R1T’s camp kitchen.

The Cybertruck is supposed to enter production late this year, and there have been over 1 million Tesla Cybertruck reservations so far.