VW ID.5 Electric SUV Is Headed to the Munich IAA

We knew it was just a matter of time before the ID.4 would get its own coupe-shaped SUV sibling, and that SUV is now on its way to Munich’s IAA Mobility 2021 in a matter of weeks. The automaker has released a fairly revealing preview of the model, which is expected to go on sale in 2022.

Badged as the ID.5 GTX, the electric SUV will be shown in near-production form featuring a dual-motor, all-wheel drive layout and likely the larger of the batteries offered in the ID.4 lineup at the moment, weighing in at 77 kWh. Among other things, this should make it more expensive than the top flavor of the ID.4.

As the preview image shows, the ID.5 GTX will land close to the appearance of the ID.4, but will feature plenty of unique bodywork as well as a truncated greenhouse.

“The flat sloping A-pillars positioned right near the front give the roof line an elegant flow—it stretches low over the body and tapers out in an integrated rear spoiler,” the automaker says. “At the rear, horizontal lines accentuate the width, with the light strip attracting the most attention. The LED rear lights with a 3D design complete the feeling of luxury.” 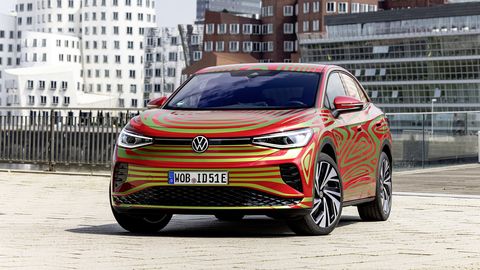 The ID.5 GTX is not expected to be offered stateside despite the North American market’s penchant for coupe-shaped SUVs, in what is likely an effort to maximize the appearance of affordability of the ID.4. We should also note that the ID.4 itself is not exactly the most wagon-shaped model and features a rakish rear window, so in the eyes of some buyers the difference in body styles between the two could be negligible, while the price difference could be substantial.

Another likely reason the ID.5 GTX will not be offered stateside is the fact that the Audi Q4 e-tron and its coupe-shaped Q4 e-tron Sportback twin will be offered in the US, representing a step up in price from the ID.4 range. Keeping the uniqueness (and the price positioning) of the Sportback is likely another priority for the Volkswagen Group in the US.

Still, it’s not lost on EV buyers in the states that this is yet another ID model that will pass us by, after the ID.3 and the ID.6. So while electric Volkswagens are indeed being offered to buyers stateside, we’re not getting the entire universe of ID models. The ID.3, in particular, has been a resounding hit in Europe over the past year, where sales of battery-electric models have surged.

Monday Deals: Save on Lifts, Jacks, Racks, and More at Home Depot's Automotive Deal of the Day
Car Reviews