Washington state is moving ahead with legislation that could phase out sales of gas- and diesel-engined light-duty vehicles by the year 2030, well ahead of California’s similar executive action aimed at the year 2035. A Washington State House bill titled Clean Cars 2030 has just received approval from the legislative body’s Transportation Committee, which voted 17-12 in favor of the bill, advancing it to the next stage. The bill envisions that all new light-duty vehicles—those weighing under 10,000 pounds—must be electric to be sold or registered in the state by 2030, with a few exceptions such as for emergency vehicles.

The bill outlines a transition period and calls for a number of impact studies to be completed before 2030, including an analysis centered on “equity, especially including disadvantaged and low-income communities, communities of color, and rural communities, and strategies for maximizing equity in implementation of the 2030 requirement,” among other research. Studies of job gains and losses during the 2022-2040 transition period, in addition to required charging infrastructure, are also mandated in the original text of the bill.

“It is the intent of the legislature that the state transportation commission develop a plan and rules to ensure that all 2030 model year and later passenger and light duty vehicles sold or registered in the state be electric, in a manner that maximizes equity and a just transition for all those impacted by the change, minimizes costs and maximizes benefits for Washington’s economy, improves and modernizes Washington’s energy infrastructure, and maintains electric system reliability,” the original text of the bill states in part.

The legislation, if eventually signed into law, could be the strongest and earliest state measure yet in favor of electric vehicles, and could radically alter the state’s auto sales landscape. For starters, dealerships selling brands that don’t have EVs by that point in time would certainly be in a tight spot, though by 2030 they could be in a minority.

But there are a few crucial differences between what California is planning and the Washington state bill.

For starters, California’s plan was enacted via a governor’s Executive Order, which doesn’t have the same force as legislation; it is more of an agency directive (to CARB, in this case) to enact rule making to bring about a ban on the sales of gas- and diesel-engined vehicles. The 2035 date is not written in stone, and even though California is unique in having a strong and independent state agency to make this happen, a lot of things have to go its way between now and 2035 for eventual agency rule making to be realistic.

Washington, on the other hand, is pursuing legislation that has to get through both chambers before it may be signed into law. It’s at an early stage at the moment, and assuming this happens, it will be a stronger step than an executive action, but it could also face its own challenges. 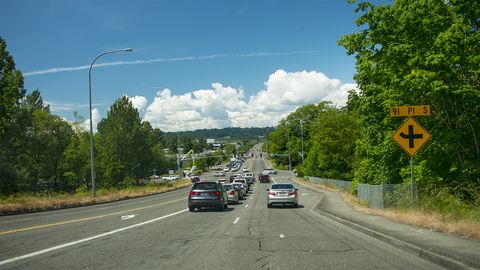 From a wider perspective, Washington state is betting that the share of EV sales in the Pacific Northwest will grow enough to make the 2030 target a reality, and that most automakers will have a wide-enough variety of electric vehicles for all new sales to be electric. Such predictions seem vaguely plausible at the moment, looking almost 10 years out, but it’s prudent to recall that the 2010 vision of the year 2020 imagined everyone driving small hybrids and EVs. Continued access to cheap gasoline, however, hastened a return to large SUVs by the second half of the decade, and contributed to slower-than-hoped EV adoption rates around the country.

Even in the EV-friendly western region of the country, EVs made up 4.8% of vehicle sales in 2020—well above 1.8% nationally, according to a recent IHS Markit study. That sounds mildly encouraging, but for some context, even if the Pacific Northwest added 5% every year between now and 2030—a tall order, admittedly—it would still only get to about half of the envisioned goal without a legislative mandate. The good news is that EV sales are expected to exceed 3.5% nationally in 2021, according to IHS Markit.

Is the Washington state bill, if signed into law, realistic in achieving EV-only sales for light-duty vehicles by 2030? Let us know in the comments below.