Engaging launch control in a Taycan Turbo S is simple. Call up Sport Plus mode, hold the brake with your left foot, floor the accelerator with your right. Release the brake and try to keep your neck steady. There’s no pre-heating the battery, no fussing with traction control settings, nothing.

And no histrionics. Just 750 hp and 774 lb-ft of torque turned into forward motion without a hint of wheelspin and minimal noise. There’s a good chance the loudest thing in the car will be the passengers as you rip to 60 mph quicker than a 911 Turbo S.

You probably know that this is Porsche’s first electric car, built on a brand-new platform that’ll soon underpin a high-riding wagon, the Taycan Cross Turismo, and a swoopy Audi sedan, the E-Tron GT. It’s a big deal, breaking all sorts of new ground for Porsche. It’s meant to reduce the automaker’s fleet fuel consumption and C02 emissions; it’s meant to compete with the Tesla Model S; it’s meant to start Porsche’s gradual transition away from internal-combustion. And at the end of the day, it has to live up to the Porsche name. 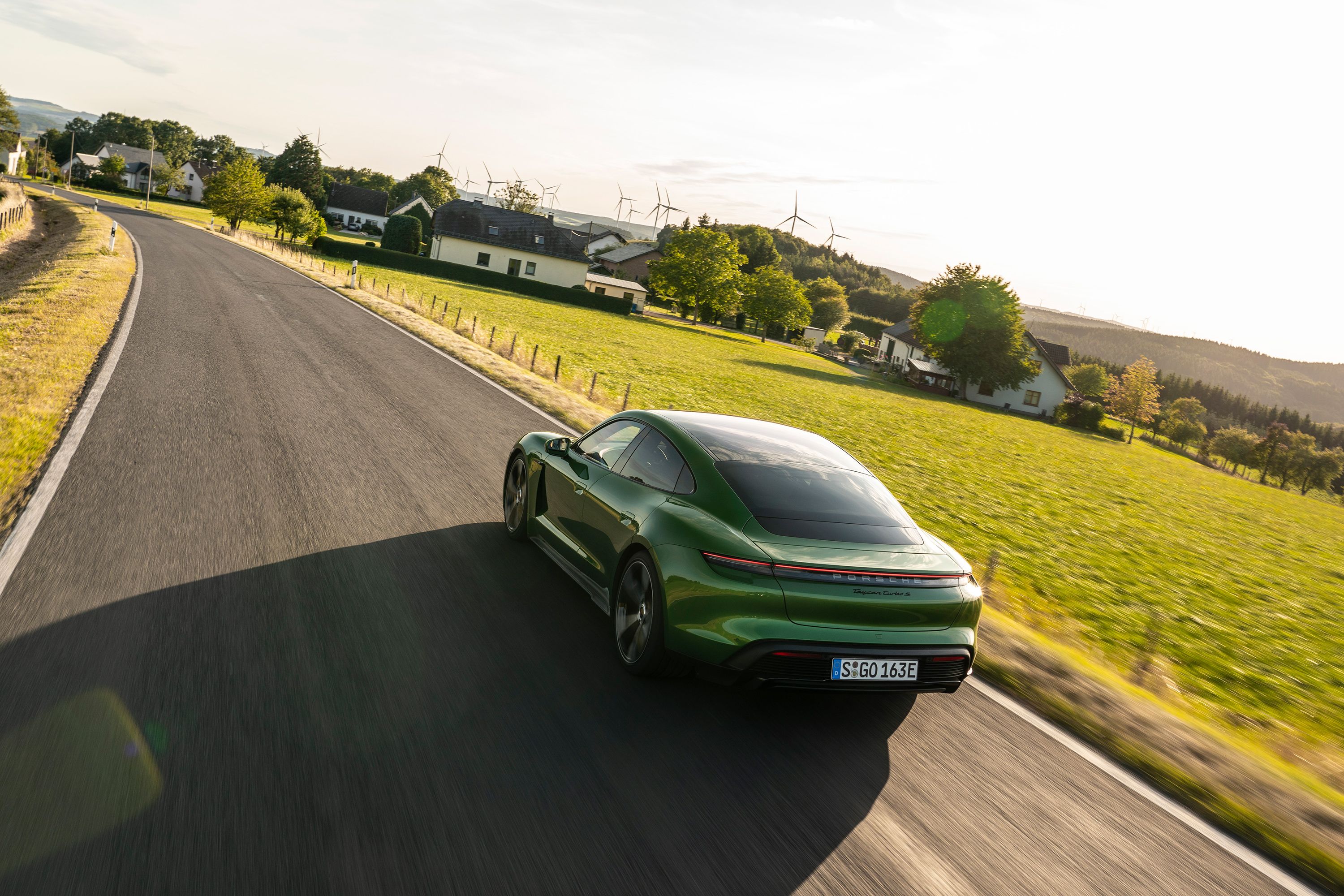 Our first chance to sample the Taycan came as part of a Scandinavian road trip put on by Porsche to demonstrate the new EV’s usability. The Turbo and Turbo S are all-wheel drive, with a permanent magnet synchronous motor powering each axle. (An entry-level rear-drive Taycan is likely to arrive soon.) On the top-spec Turbo S, those motors combine to make 626 horsepower in normal driving, rising to 750 for 2.5 seconds when launch control is activated. The rear motor drives a trick two-speed transmission with a low-ratio first gear. In Sport and Sport Plus modes, the car uses first gear from zero to around 50 mph for quicker acceleration. In all other modes, the car stays in second. 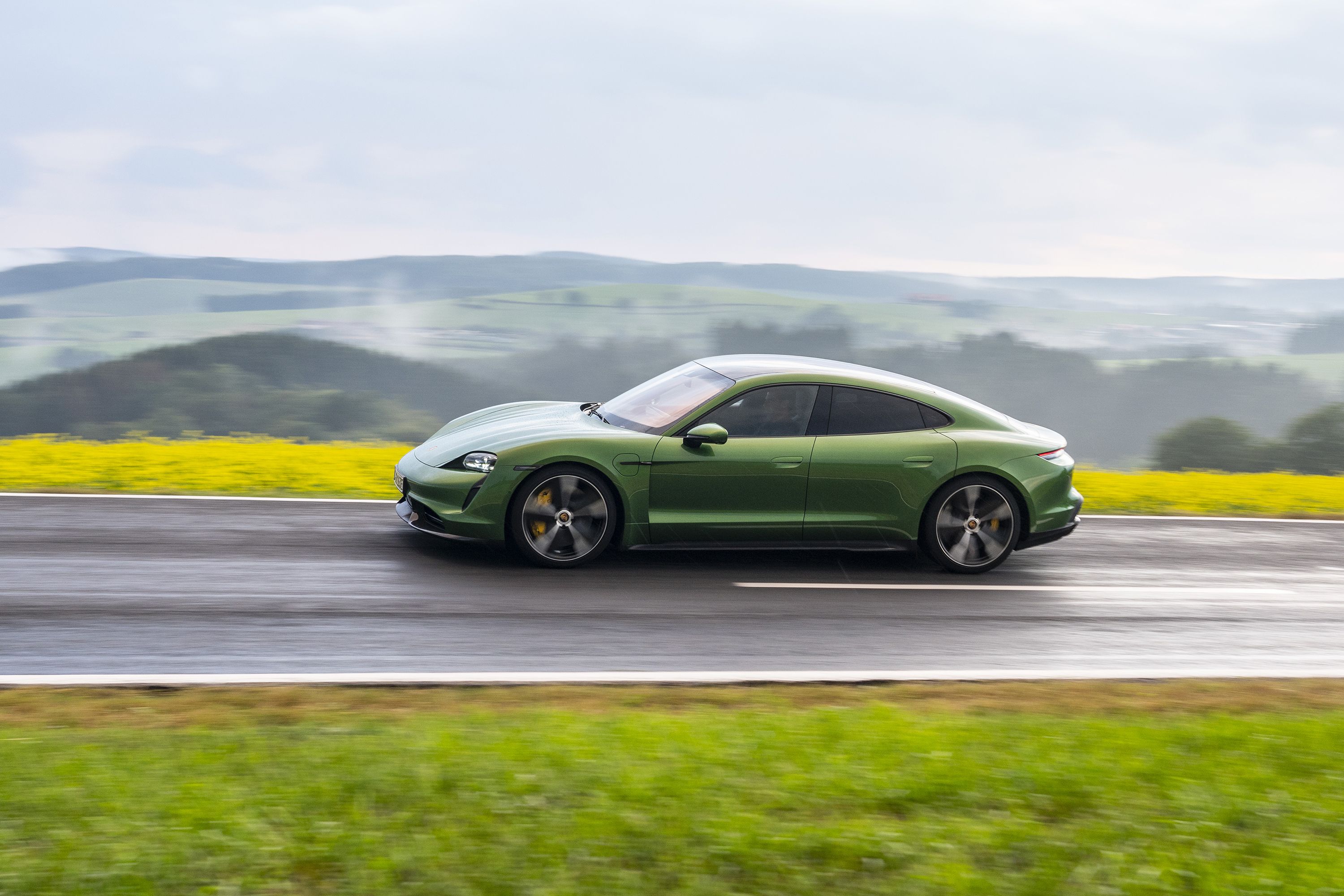 Tesla showed the world just how violently quick an electric car can be. The Taycan is capable of equal violence: The Turbo S hits 60 mph in 2.6 seconds, and runs the quarter-mile in 10.8.

But the Tesla takes some coaxing to get there. Ludicrous Mode will only engage after the battery reaches the right temperature—and depending on ambient conditions, that might take awhile. Back-to-back launches will run the Model S out of breath, acceleration waning as battery temps rise. The Taycan can hit its marks over and over, no warm-up or cool-down required. A lot of work went into that. The Porsche’s 800-volt architecture runs lower current, allowing engineers to use smaller-gauge wiring, reducing temperatures. 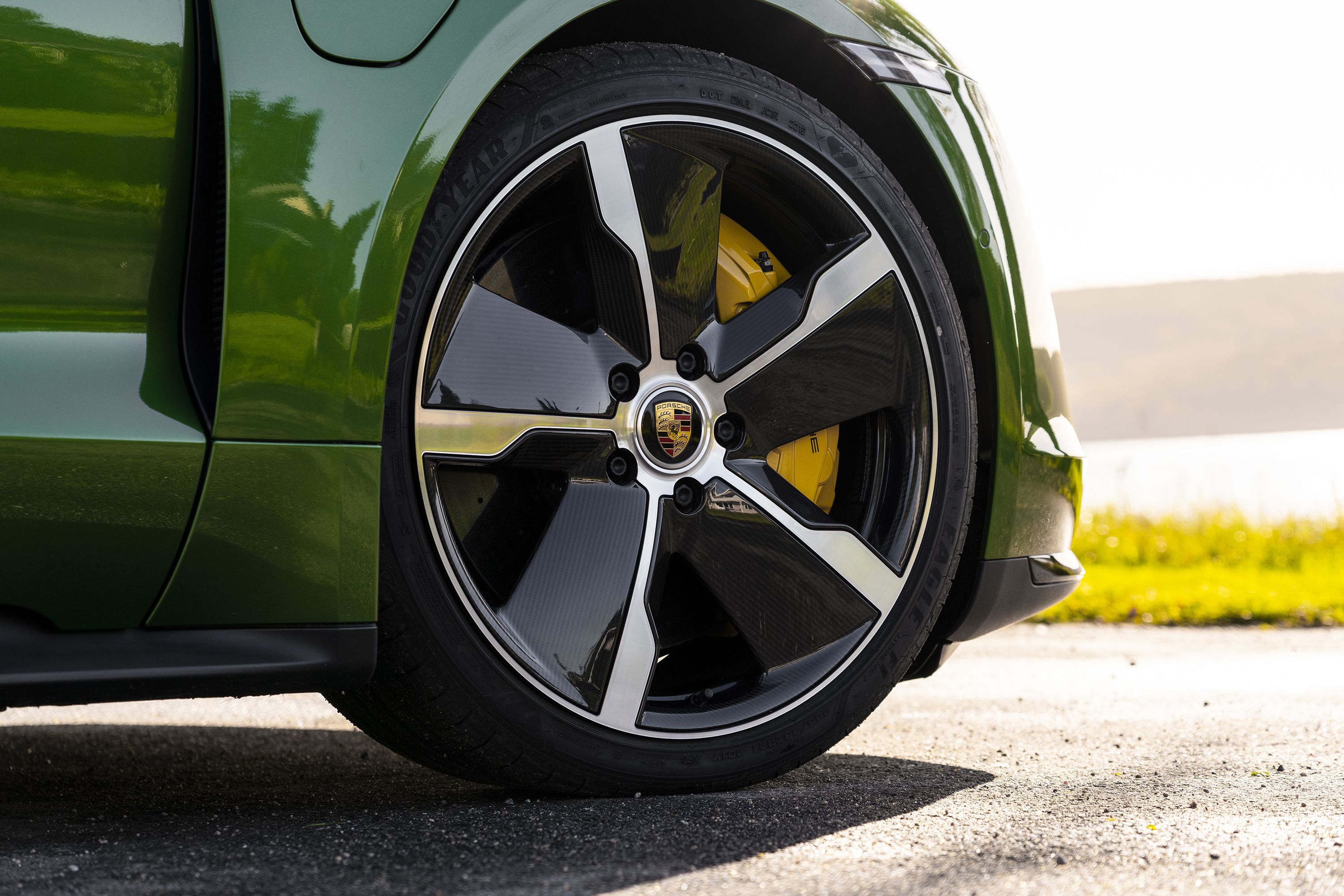 Porsche has never been solely about straight-line performance. The Taycan is shorter in length than a Panamera, but a smidge wider. Thanks to its 93.4-kWh battery pack, the new EV is a heavy machine, the Turbo S weighing in at 5121 lbs according to Porsche. Thankfully, like most EVs, the Taycan carries its weight low in the chassis, affording a center of gravity that’s lower than a 911’s. In Turbo S trim, you get three-chamber air springs, adaptive dampers, rear-wheel steering, and optional active anti-roll bars driven by a separate 48-volt electrical system. The Turbo S rides on 21-inch wheels (non-S Turbos get narrower 20s). Our tester wore Goodyear Eagle F1 Asymmetrics measuring 265/35 up front, 305/30 in the rear.

The roads between Oslo and Gothenburg alternate between tight and flowing. On both varieties, the Taycan hides its size and weight, the active anti-roll bars contributing to real agility and freakishly good body control. The damping controls body motion well, and the steering is reassuringly hefty and precise, weighting up naturally as load increases at the front. The steering wheel doesn’t wriggle away like an old 911’s, but no electric-power-assist setup in Porsche’s current lineup does. 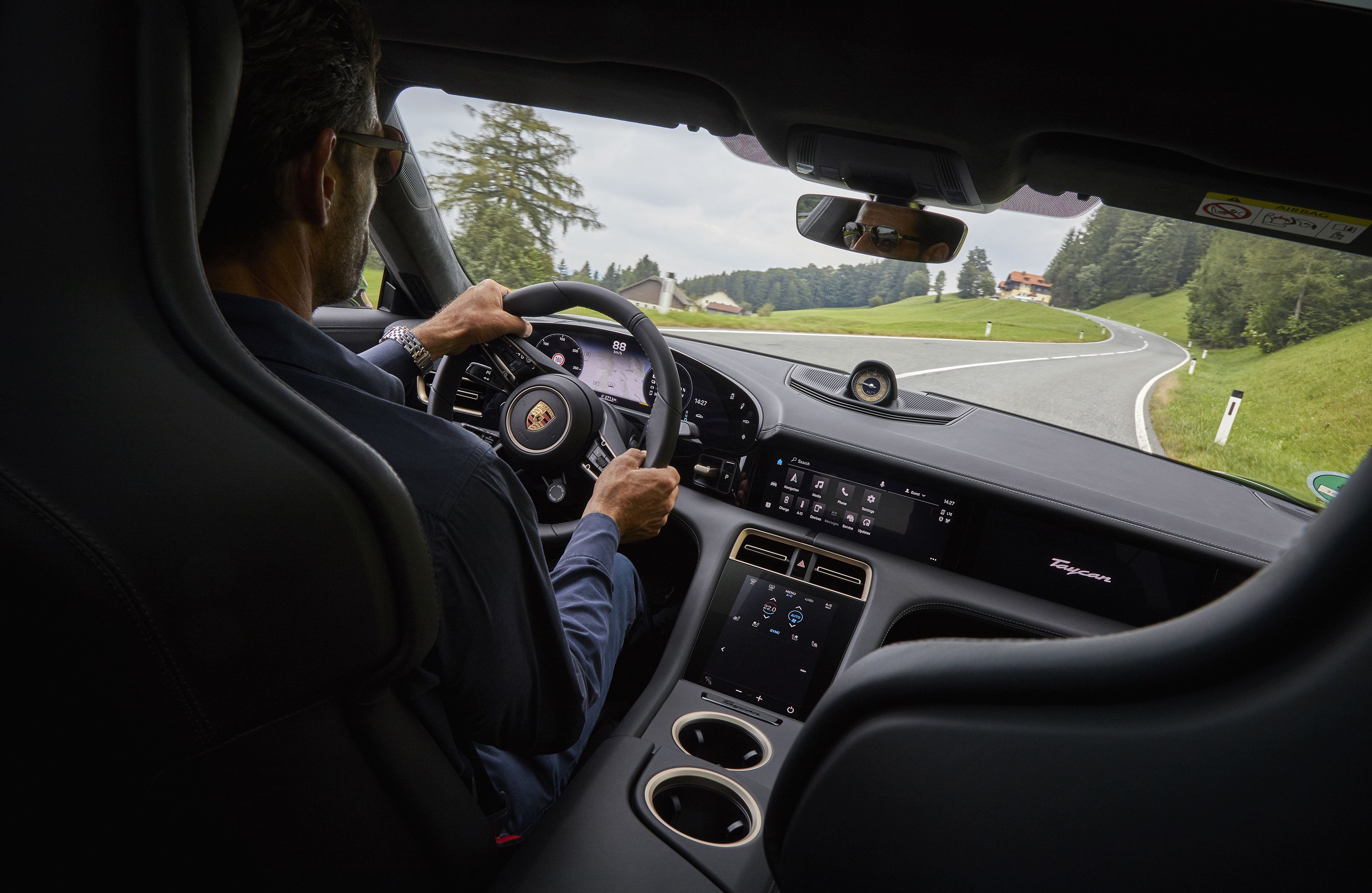 Unfortunately, the brake pedal doesn’t quite match the steering. In normal driving, the Taycan accomplishes most of its braking through regeneration. Around town, or in any situation that demands small brake modulations, the pedal tends to feel spongy, a bit unnatural. Once you’re moving, though, there’s nice bite at the top of the pedal and a more predictable feel.

Different EV manufacturers approach regenerative braking differently. Many pure EVs control regen through the accelerator pedal—the more you lift, the more the car slows. Porsche engineers thought this wasn’t quite intuitive, especially in fast driving, so the Taycan only engages a small amount of regen on throttle lift, which can be switched off entirely via a steering wheel button. There’s also an automatic regen mode, where a camera analyzes the road ahead to adjust the amount of regen available.

The Taycan also has massive conventional brakes. The Turbo S comes standard with carbon-ceramic rotors, 16.5 inches up front, 16.1 inches rear, gripped by 10-piston and four-piston calipers, respectively. (The setup is optional on the non-S Taycan Turbo, which comes standard with steel brake rotors measuring 16.4 inches up front and 14.4 inches at the rear, with the same caliper setup.) On the Turbo S I drove, the transition between regen and friction braking was totally seamless. 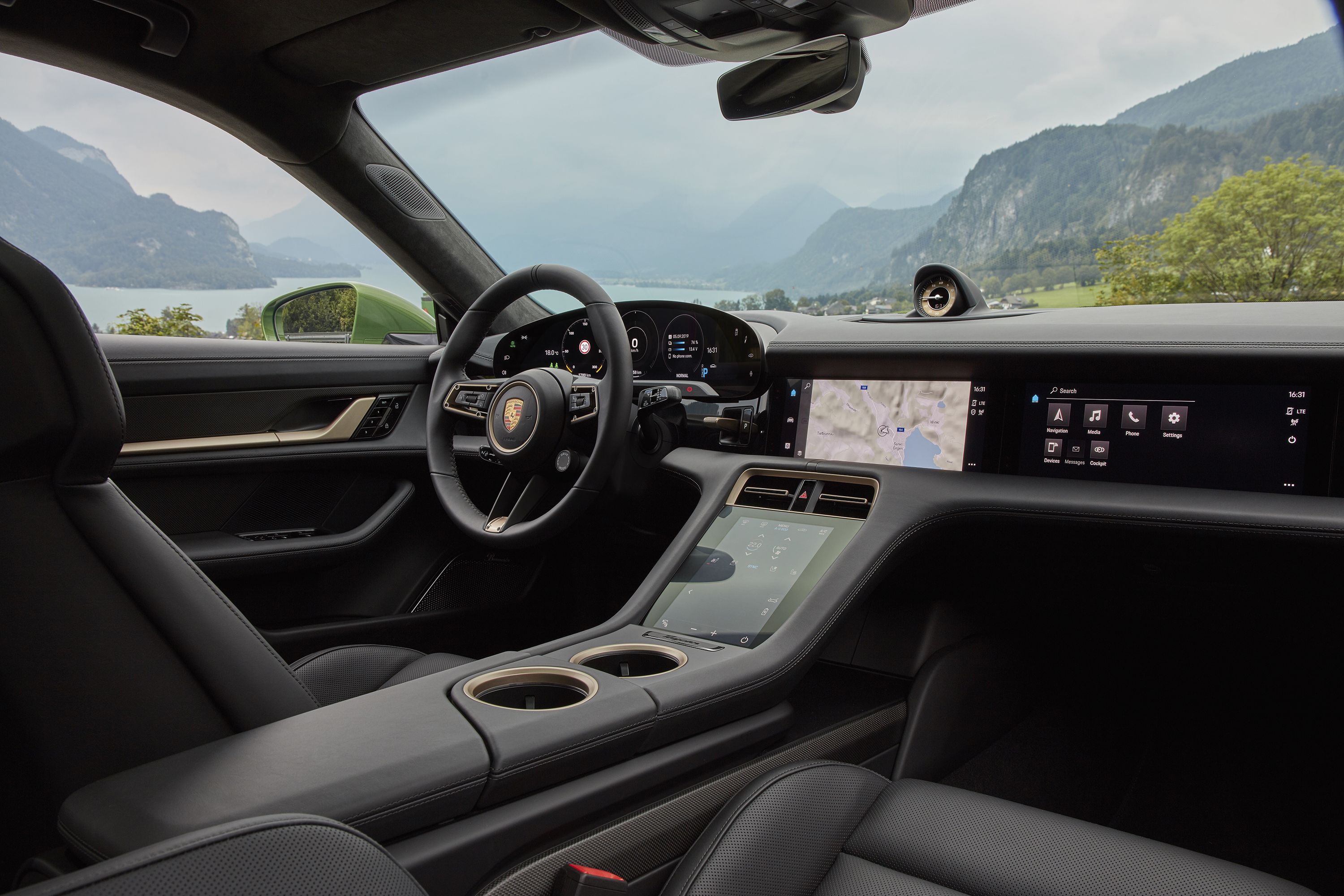 We could talk about the more extreme dynamic capabilities of the Taycan all day—and hopefully, we’ll have more time in the car to explore those further. Ultimately, this car is a daily-driver, and real-world livability is the most relevant factor.

Things are off to a great start with an excellent driving position—a little higher a 911’s, thanks to those batteries crammed into the floor, but familiar. The tall front fenders help you precisely place the nose of the car, and like all Porsche sports cars, the short hood tumbles away from your view. The scene through the windshield is charmingly reminiscent of a 918 Spyder’s.

There are other 918-inspired details, too, like the unshrouded gauge cluster, the rising center console and touchscreen, and the stumpy gear selector rising from the dash. As is Porsche tradition, there’s an on/off button to the left of the wheel.

Porsche went screen-heavy with the Taycan. The instrument panel is a color display, deeply configurable and looking great. The rest are a little less successful. The center-stack infotainment system is an updated version of that found in the rest of the Porsche lineup, but it offers no physical buttons. The heat and air conditioning, window switches, and door locks are all operated through the touchscreen. It feels like tech for tech’s sake. Physical controls wouldn’t be as slick, but they would make life easier.

You can also order a display for the front-seat passenger, repeating much of what’s on the screen that sits less than an inch left of it. It costs $1130. Skip it. 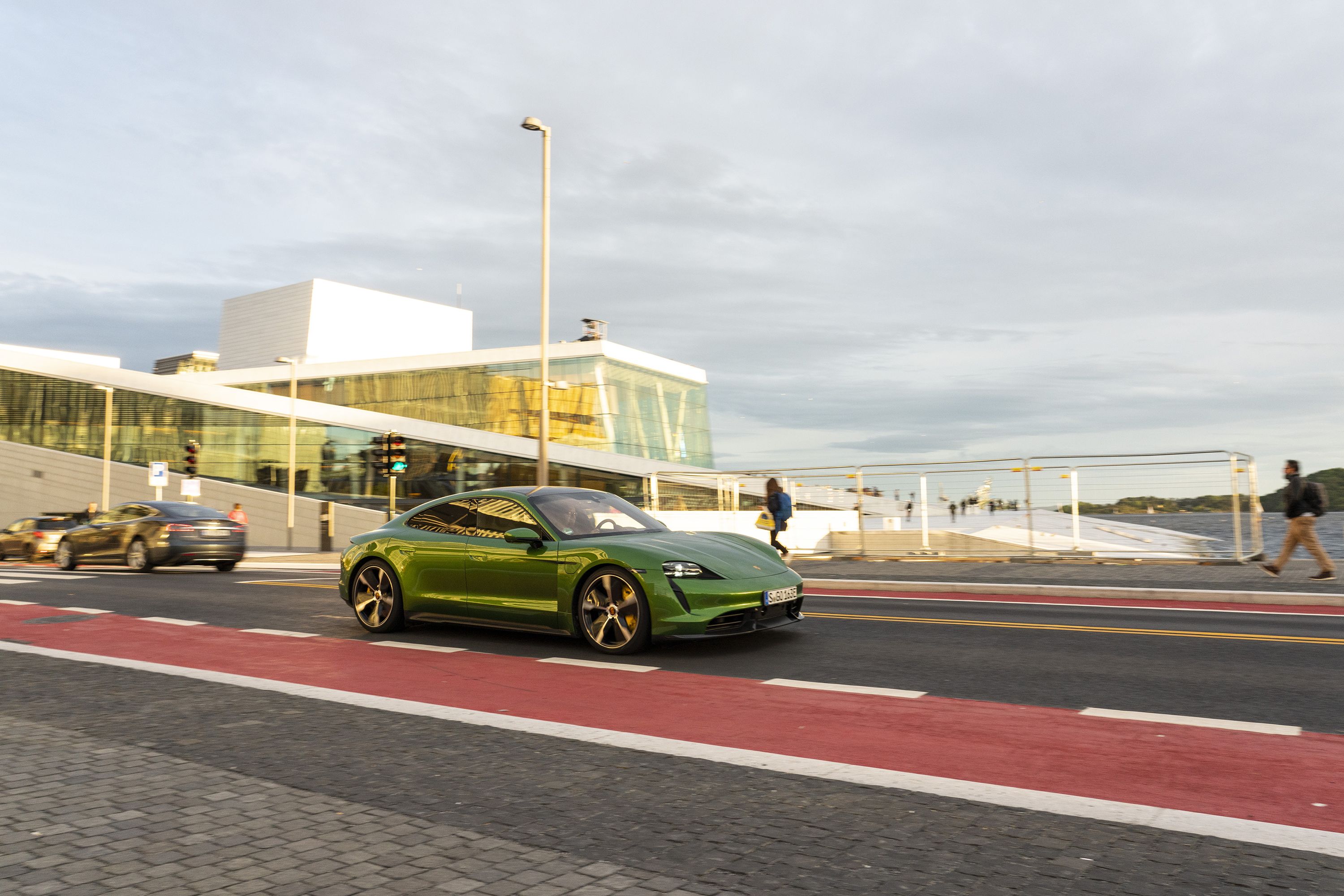 Leaving Oslo, the Taycan was plenty easy to drive, the rear-wheel steering making maneuvering a cinch. Ride quality is not spoiled by the 21-inch wheels, though we’ll save final judgment until after we can sample a Taycan on the potholed streets of our New York City headquarters. Wind noise is minimal, though there’s a fair bit of sound from the big Goodyears. The Taycan is one of the most aerodynamically slippery vehicles on sale today, a coefficient of drag of just 0.22 for the Turbo, 0.25 for the Turbo S, the latter due to wider tires.

EVs are generally thought of as “silent.” It’s not entirely true, of course, and the Taycan’s motors make themselves known with a subtle sound that rises in pitch as speeds increase. In Sport or Sport Plus, you can hear the rear motor’s gearbox upshift and downshift, which is genuinely cool.

Of course, one of the biggest factors in evaluating the livability of an EV is battery range and charging. That was a little harder for us to judge on this first test of the car. The Taycan I drove seemed to hit the range numbers predicted on the gauge cluster, and a 150-kW charger at a service station just over the Swedish border brought the battery from 40 percent to 80 percent in well under 20 minutes. EPA-certified range figures are yet to be determined, though Europe’s slightly-more-optimistic testing determined a total range of 256 miles. 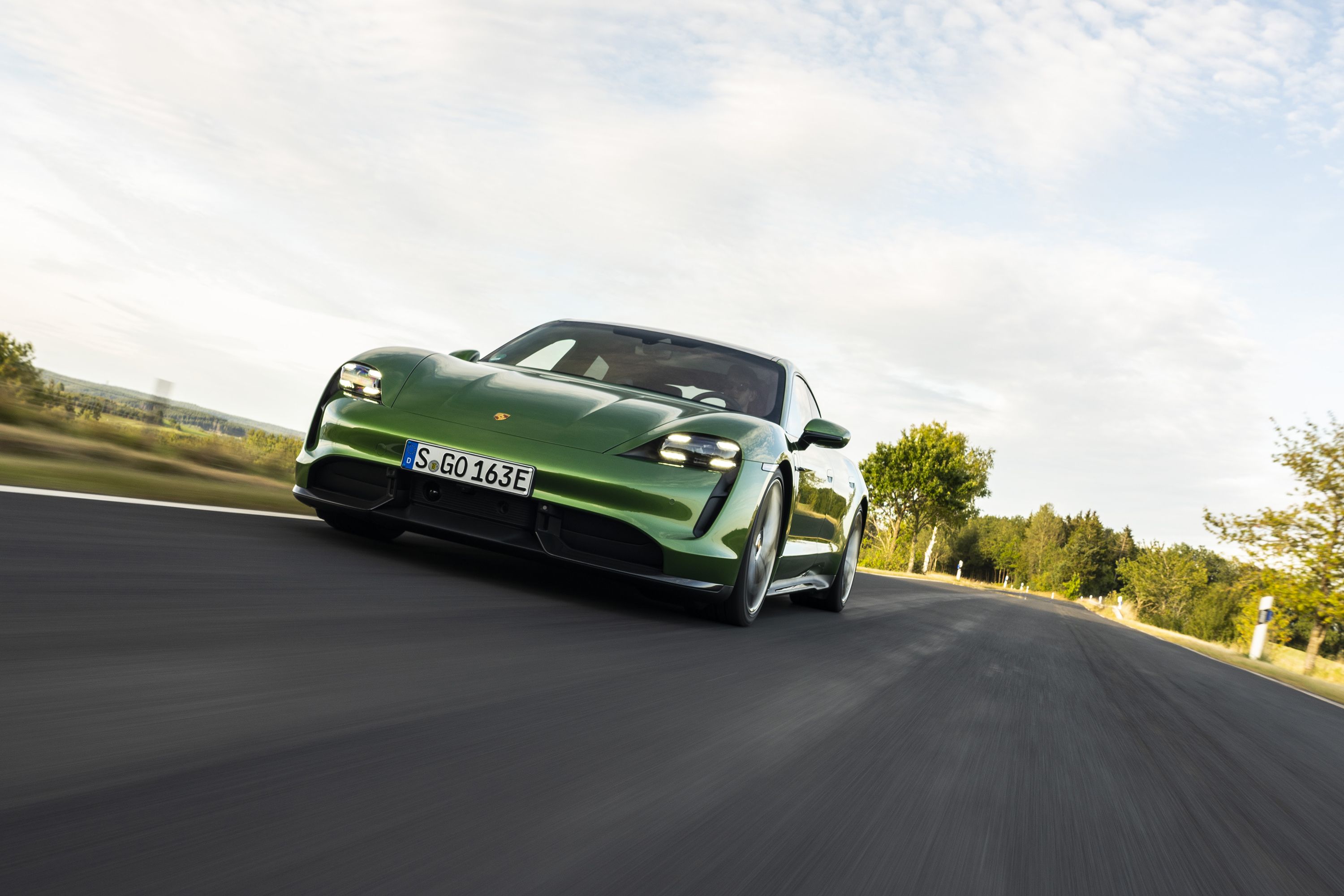 Popular thinking holds that the Taycan is the traditional auto industry’s first direct shot at Tesla. A Model S Performance starts at around $100,000; the Taycan Turbo starts at just under $155,000, and a Turbo S like the one I drove will command more than $200,000 in the US. Porsche has decades of manufacturing experience that Tesla lacks, and a much stronger reputation for quality, but Tesla is currently at the forefront of battery technology. And right now, nobody can beat Tesla’s charging infrastructure.

But Porsche has created a deeply impressive car. This isn’t a conventional car converted over to EV spec, it’s a machine engineered from the ground up to combine electric car technology with the capabilities Porsche is famous for.

We don’t know what the future holds for the internal combustion engine. Certainly its role will continue to be diminished, which is a scary prospect. Let the Taycan give us some hope. It proves that a Porsche doesn’t need to have an engine to be a Porsche.