Home » Future Cars » The Story Behind the Mid-Engine Corvette The Story Behind the Mid-Engine Corvette

It’s existed for decades—as a rumor, a whisper, an inkling, a concept, a prototype. Nothing more. Nobody thought the mid-engine Corvette would ever be real. Yet it’s right in front of me, an orange Chevy with the engine behind the driver. And the people who created it—chief engineer Tadge Juechter, design manager Kirk Bennion, and product marketing manager Harlan Charles—are beaming. They’ve had the opportunity to make myth reality. We sat down to discuss the biggest fundamental change to the Corvette in its nearly 70-year history. 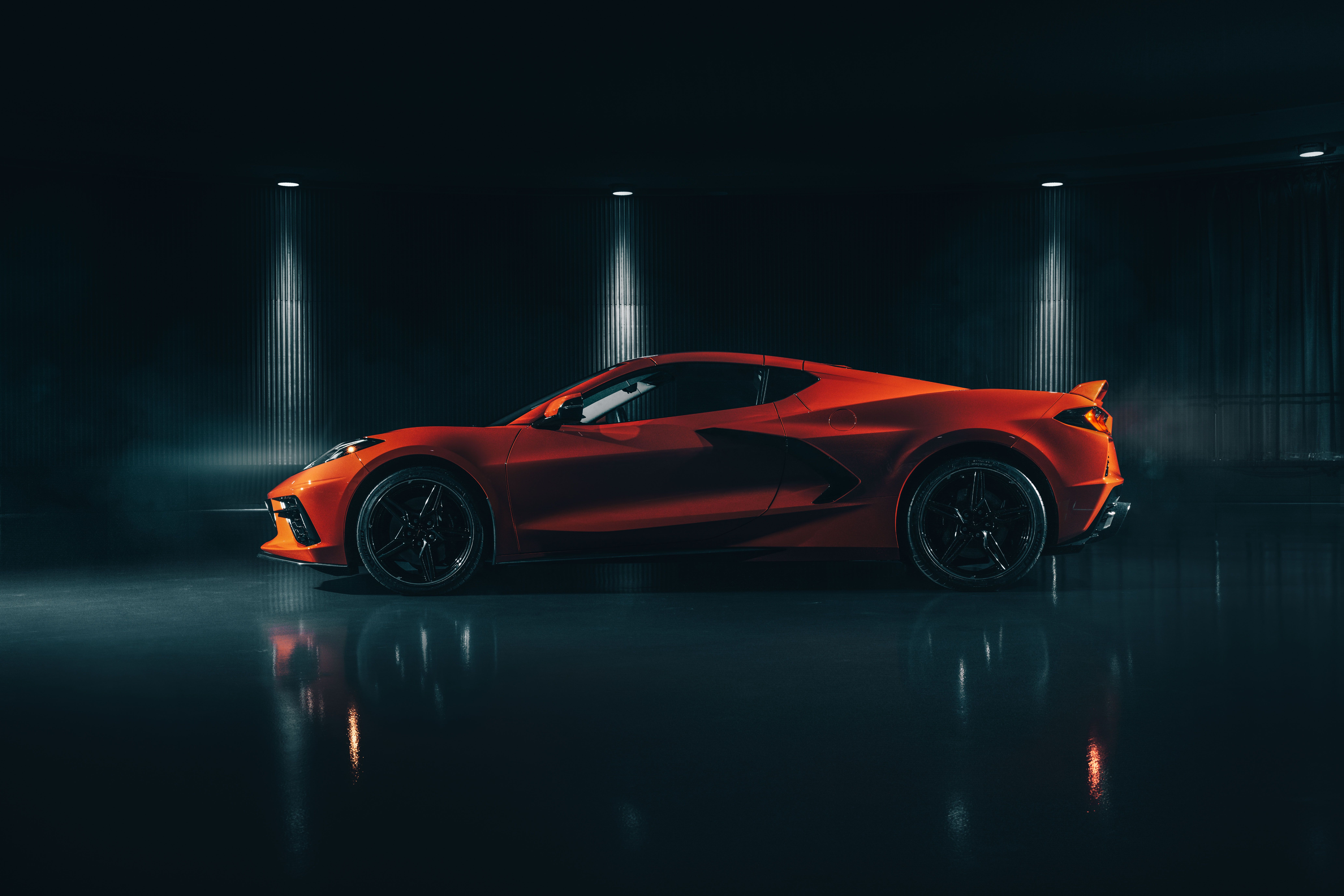 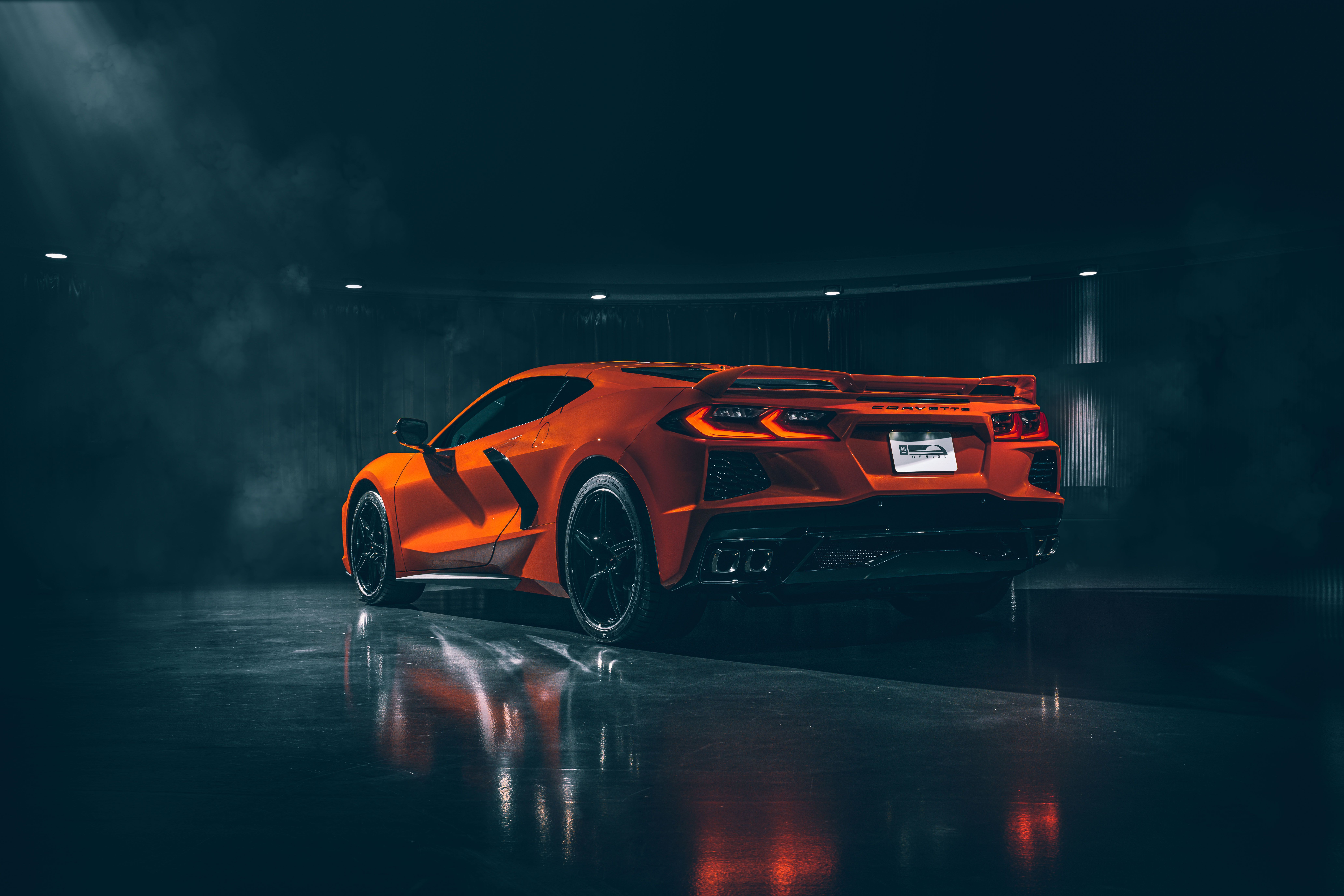 This interview will appear in the September issue of Road & Track.

Road & Track: The big question: why?

Tadge Juechter: A few reasons. Biggest was the limit of performance. We knew we were in trouble when we were bringing out the 638-hp C6 ZR1 and we had a hell of a time beating the 505-hp Z06’s 0-to-60. It was only because of the Michelin tires that we were able to.

The engine gets heavier to be more powerful, and you’re putting more weight on the front axle and, relatively speaking, less weight on the back. We couldn’t hook up. So that was kind of the start of it. Fifty/fifty weight distribution is great when you’re not power-limited. That’s why race cars evolved with the engine in the back. You really want more like 40/60, so you can get the power down.

The equation we had to figure out is, how do you do all the rest of what’s great about Corvette?

R&T: How do you make it daily drivable?

TJ: It’s gotta be daily drivable. You don’t want any of the exotic, hard-to-live-with kinda stuff. Everything from service cost to thermal management is a huge deal in this car.

Kirk Bennion: Also entry and egress. Aspirational cars tend to neck down in the front heel-to-toe area. And we were able to keep the same entry and egress that the current car has. So we have front-engine entry/egress in a mid-engine car.

KB: It’s taking the whole [passenger compartment] and moving it 16.5 inches forward. And in doing so, we really watched that distance to the front wheel, so that we weren’t encroaching on the entry/egress. It was all part of the early architecture, one of our goals.

TJ: When you put the engine in the back, the front wheels need to move rearward, and the back wheels go way the hell rearward. So you’re nearly sitting on the front axle. The front wheels turn, and so they practically overlap with the pedal box. That’s one of the design challenges. We really had to focus on doing a tunnel-dominant structure. We already have a structural backbone, but we had to put even more emphasis on getting loads down that center tunnel, so we didn’t have to do giant rockers, like some people do, that you have to climb over. We did everything as a structural backbone.

R&T: This had to be a polarizing project for the team.

R&T: What was the genesis of the project?

TJ: We sold it, before bankruptcy, to Bob Lutz. At that time, the attitude was, “No. We have a great formula. It’s working great. Why would we mess with it?” But there were always technical reasons to do it. We also had demographic reasons, honestly. We did a clinic where we took the same generic design language, not a Corvette, and put it over front- and mid-engine cars. We found our current customers are happy either way. But people that we’d like to get, they’d rather have a mid-engine. Given that our customer base was getting older every year, we had additional support that it was a good idea.

R&T: Do you remember how you reacted to its approval? How you heard, how you felt?

Harlan Charles: It’s hard because there’s so many levels of approval, so it’s like, are we even allowed to talk about it? Is it approved for contract signing?

HC: We were probably saying that April 11th. “I guess they can’t cancel.” We always had that fear. 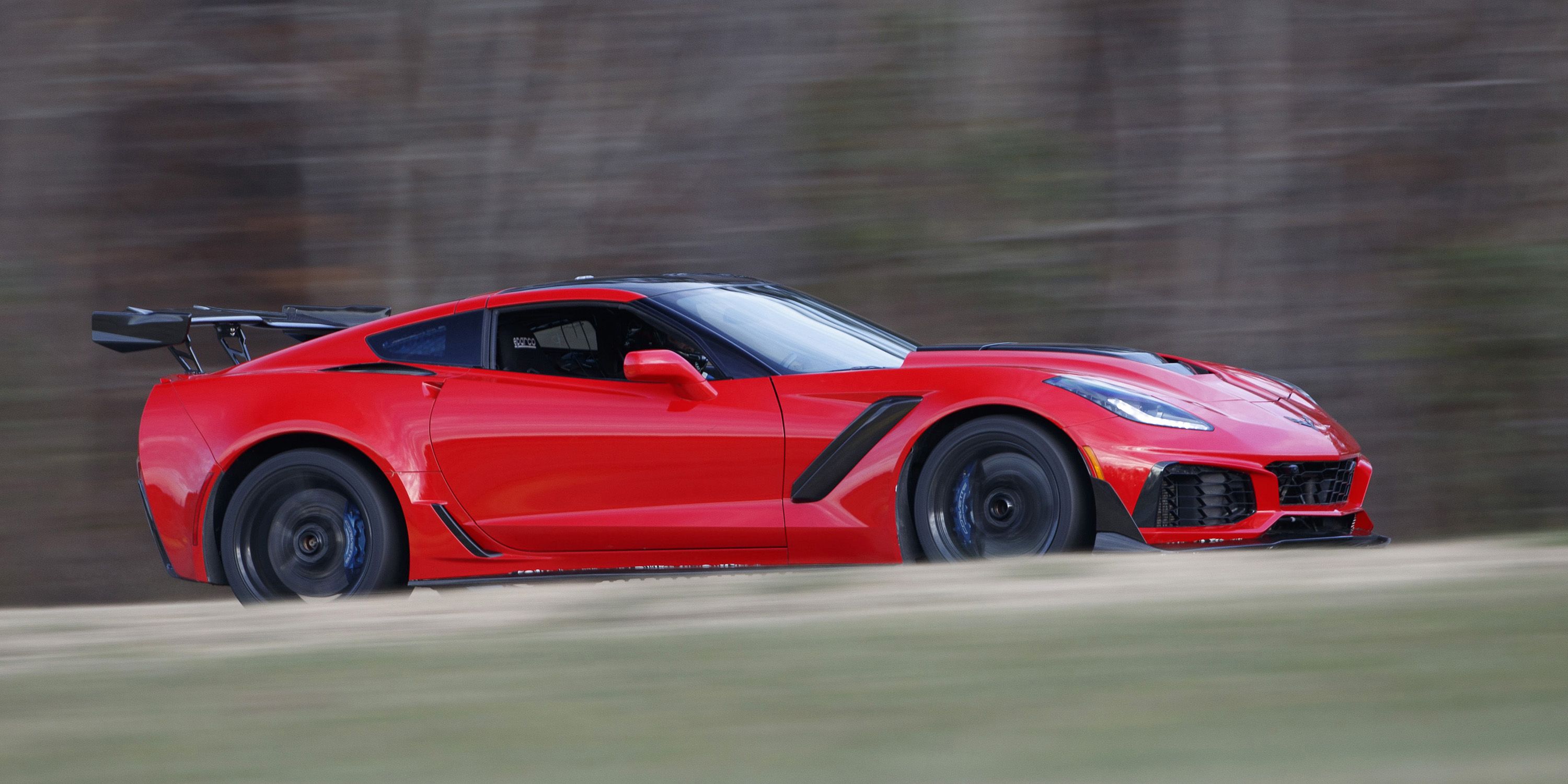 R&T: Why get rid of the front-engine car? Porsche has about 80 versions of the 911 and the Cayman. Seems like Corvette is a name that could also support more than one model.

TJ: We thought about keeping the old car in production. A lot of people were saying, “Why don’t we hedge our bets?” After we got this nailed as to what it looks like, what the specs are gonna be, what the reality of it was, you park them side by side, you can’t sell the old car.

R&T: This is GM’s first mid-engine car since the Fiero.

TJ: Yes. We had Corvair [rear-engine], Fiero, and then this.

R&T: Quite the path. And you haven’t worked on a mid-engine program before.

TJ: There are special challenges on this one. We didn’t have experience in crashworthiness. Put the engine in the back, now the engine’s not there to act as a load structure and a front barrier. The actual structure that’s up there has to decelerate the mass from the occupant compartment and behind. Thermal’s a huge issue. How can you robustly cool the engine, and then how do you make sure everything else stays cool?

We knew from the beginning we couldn’t just do what everybody else does and only put a front trunk in. Today’s car has so much luggage room, it makes it easy. You can do long-distance touring in it. We wanted to have a similar amount of space. And so we knew putting a trunk in the back—for the roof, for golf clubs, or a bunch of luggage—challenges you thermally, because on most cars, you can just vent it all out. Heat goes every which way.

R&T: You’ve dealt with a lot of rumors. I remember one in particular—that the rear glass was cracking under acceleration.

TJ: That’s absolutely false and actually preposterous on the face of it. The body structure’s not designed around engine torque or engine output. That’s a trivial load.

KB: How that rumor got started was Cadillac was track-testing, and they were changing out parts. They broke one of them and threw it out. We were testing later. Someone saw that broken part in the trash and assumed that it came off a Corvette.

TJ: There’s all this falsehood out there. And we can’t address it. We’re not gonna go out there and try to explain away every little thing.

TJ: We even had a McLaren for a little while. We had a Ferrari 458 that we thought was closest in the overall package. The size, the dimensions of the car, V-8, you know. It has some of the same challenges. So we did a lot of benchmarking around the 458, which a lot of people say is the best sports car ever created. 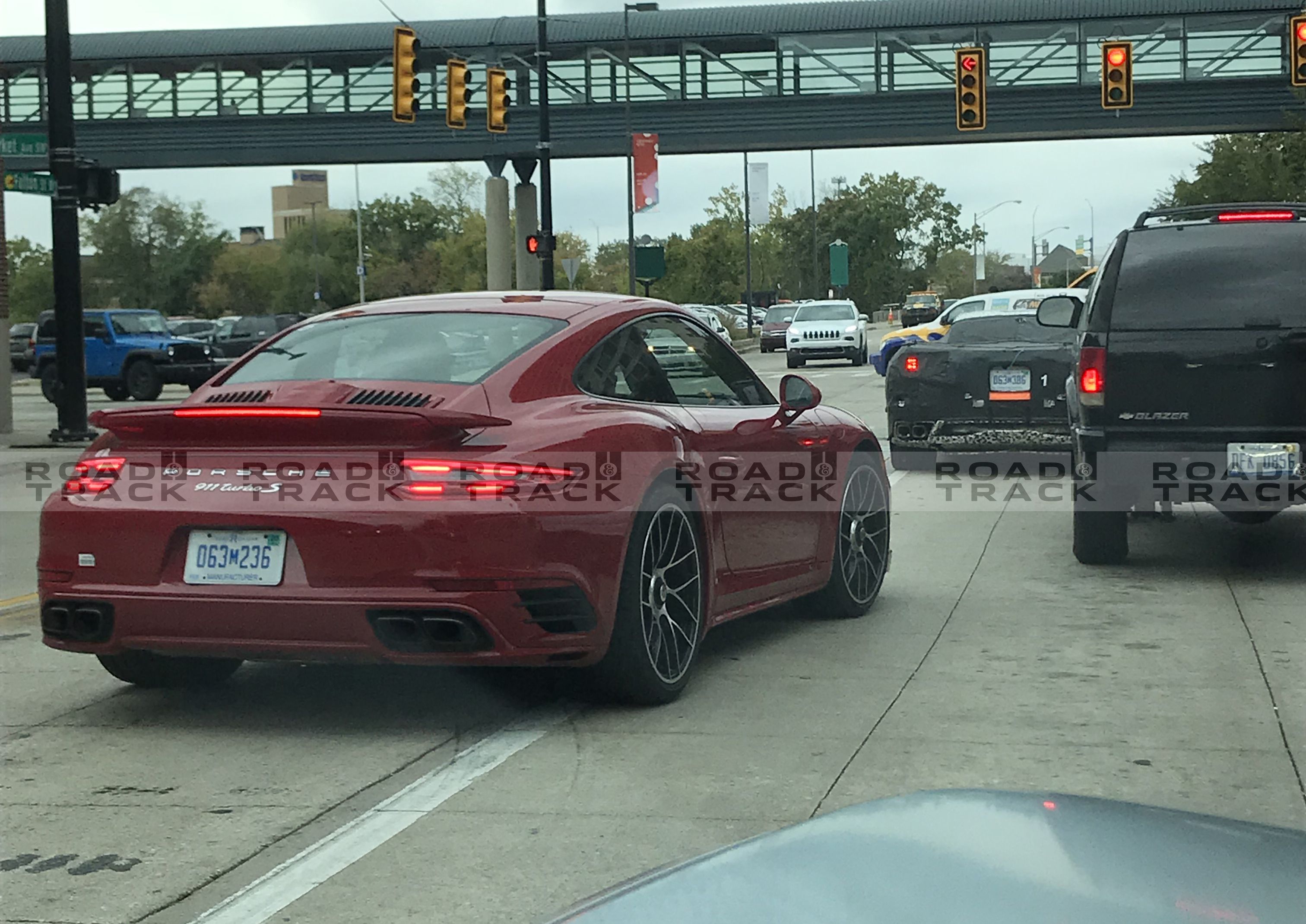 TJ: I like to say, if you can afford the current car, you’ll be able to afford this one.

R&T: What about the gearbox?

TJ: There has to be an integrated transaxle, the diff has to be ahead of the transmission. There wasn’t a trans, off-the-shelf, that we could use that would fit our architecture, our aspirations. It’s still a 6.2-liter small-block V-8 [495 hp, 470 lb-ft of torque]. So we wanted the speed and quick shifting of [a dual-clutch transmission], but it also had to be compatible with a big-bore, high-torque engine. We had to design one from scratch. TJ: It’s Tremec. They sell manuals, but the writing’s on the wall. They could watch the volumes going down every year. So they were super-motivated to get into the DCT business. They went out and bought Hoerbiger, a controls company in Belgium that worked with Getrag.

R&T: But wasn’t the C7 one of the highest-selling manual cars?

TJ: Absolute volume? Pretty high. But our manual-trans volume’s gone way down. Even cars like a Z06 that historically have been only manual, as soon as we offer the automatic, it goes up to what, 80 percent [auto]? Something like that. 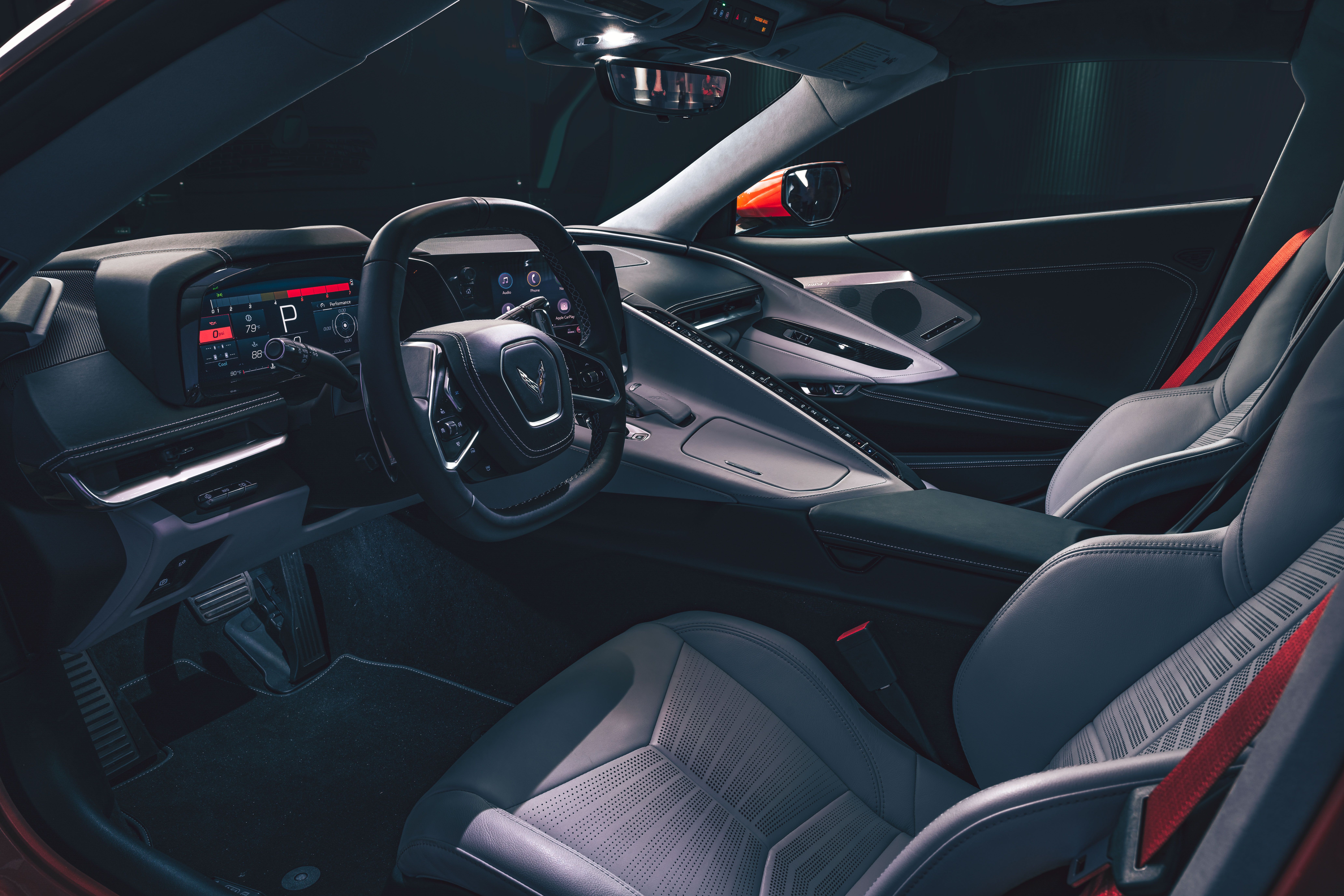 R&T: Did you consider three pedals?

TJ: We started saying, “God, people are gonna be pissed at us if we don’t do a traditional manual. Let’s see if we can do it.” But I was talking about the pedal box and how close it comes to the wheel. Having space for that third pedal pinches right up against where the tire is. If you wanted to do that, you’d have to put all the pedals so close together, it’s less than ideal ergonomics.

HC: And the interior guys were excited, too, with how [being automatic only] enabled them to deal with the design.

R&T: That first mule was based on a Holden Ute. A car-based pickup!

TJ: We had to prove out our suspension-geometry assumptions and the structure. And so we said, okay, we’re gonna build this mule, the first test bed. How do we camo it? You can’t camo the proportions. We talked about putting a giant front end on the thing. But the camo would have wrecked the utility of it. So the best thing we could come up with was that sport-ute kind of camo. And it worked for a while.

R&T: Is that mule still around? Or is it totally gone?

HC: Part of our history.

R&T: How long have you been officially working on the car?

TJ: It’s about five years. People are saying, “Oh, this car’s taking so long to come out.” Actually, my argument is that it’s early. We only have six years of production on the C7. Historically, we’ve been able to start advanced work on the next generation right under everybody’s noses. You could do all the stuff under the skin and just camo it as a current car. So we were doing work historically, but because this one you could tell immediately, everybody started a watch on us. We’re not late. R&T: Letting people see it has to be a weight off.

HC: It is hard to talk about.

TJ: Even after we admitted that it is a mid-engine, most of us would whisper. Even amongst our own teams, like, we wouldn’t say those words.

HC: It’s awesome that so many people want to know and are interested. That’s what people are excited about.

TJ: The media pre-hype, we didn’t do anything. We never even admitted anything. It’s created this monster. When I drove Mary Barra around New York City, and the crowds were 10-deep, I could hear young voices screaming, “Mid-engine Corvette!” They’re screaming through the crowd, “Mid-engine!” These are kids who don’t even have their driver’s license, but they’re already imprinted that midengineCorvette, one word, is this aspirational unicorn.

HC: This car, I think, is the opportunity for this younger generation. This is gonna be their Corvette. That’s the one that the first time they see it, it’s so exciting. It’s such a big change.

R&T: Nearly 50 years of magazine covers have been claiming that this is coming.

A Corvette 'brand' may be the next 'Vette news, complete with an SUV