It has been almost two years since we got the inkling that the Tesla Model S might yet have more performance in store, with a possible “Plaid” model on the way. After delays and a last-minute price hike, the Plaid is a reality, breaking cover Thursday night at an event that saw the first 25 examples delivered and Tesla CEO Elon Musk proclaim the Model S Plaid the quickest production car in history.

Chosen in honor of one of Musk’s favorite films, Mel Brooks’ satirical sci-fi Spaceballs, the Model S Plaid is the highest-performing vehicle Tesla has ever constructed. It has torque-vectoring, tri-motor all-wheel drive, with one motor on each front wheel and a single unit for the rear axle. These new, high-rpm units can haul the car from zero to 60 mph in a claimed 1.99 seconds (subtracting a one-foot rollout, that is), and reach a peak output of 1,020 horsepower, 1,000 of which they can sustain all the way to the car’s top speed of 200 mph. 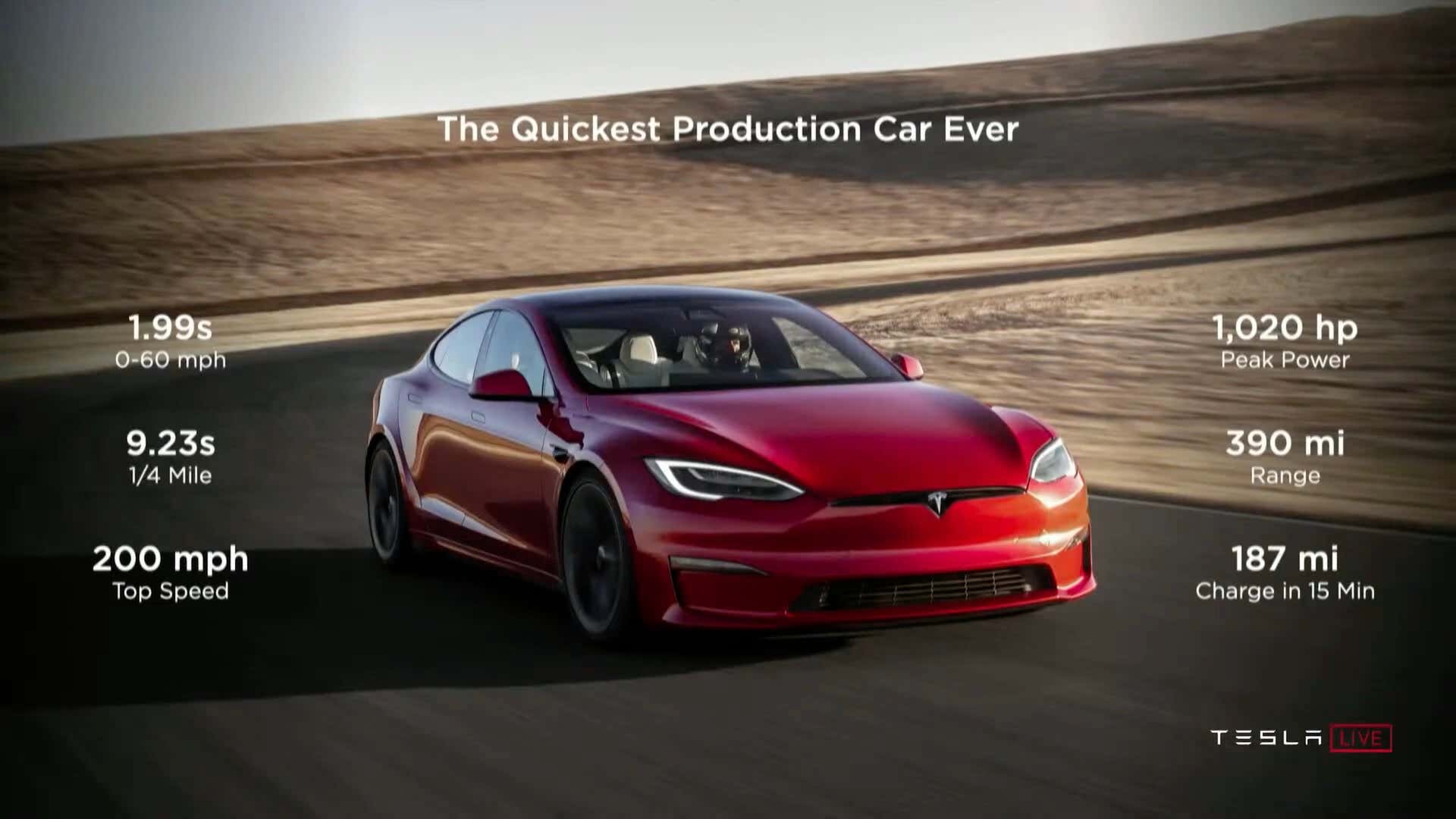 More easily accessed legally is the car’s quarter-mile drag performance, which allows it to complete a standing quarter in a claimed 9.23 seconds at 155 mph. That’s close to two-tenths quicker than the $3 million Bugatti Chiron as tested by Car & Driver, though not quite the quickest quarter-mile time for any production car—Croatia’s Rimac Nevera runs it six tenths quicker. 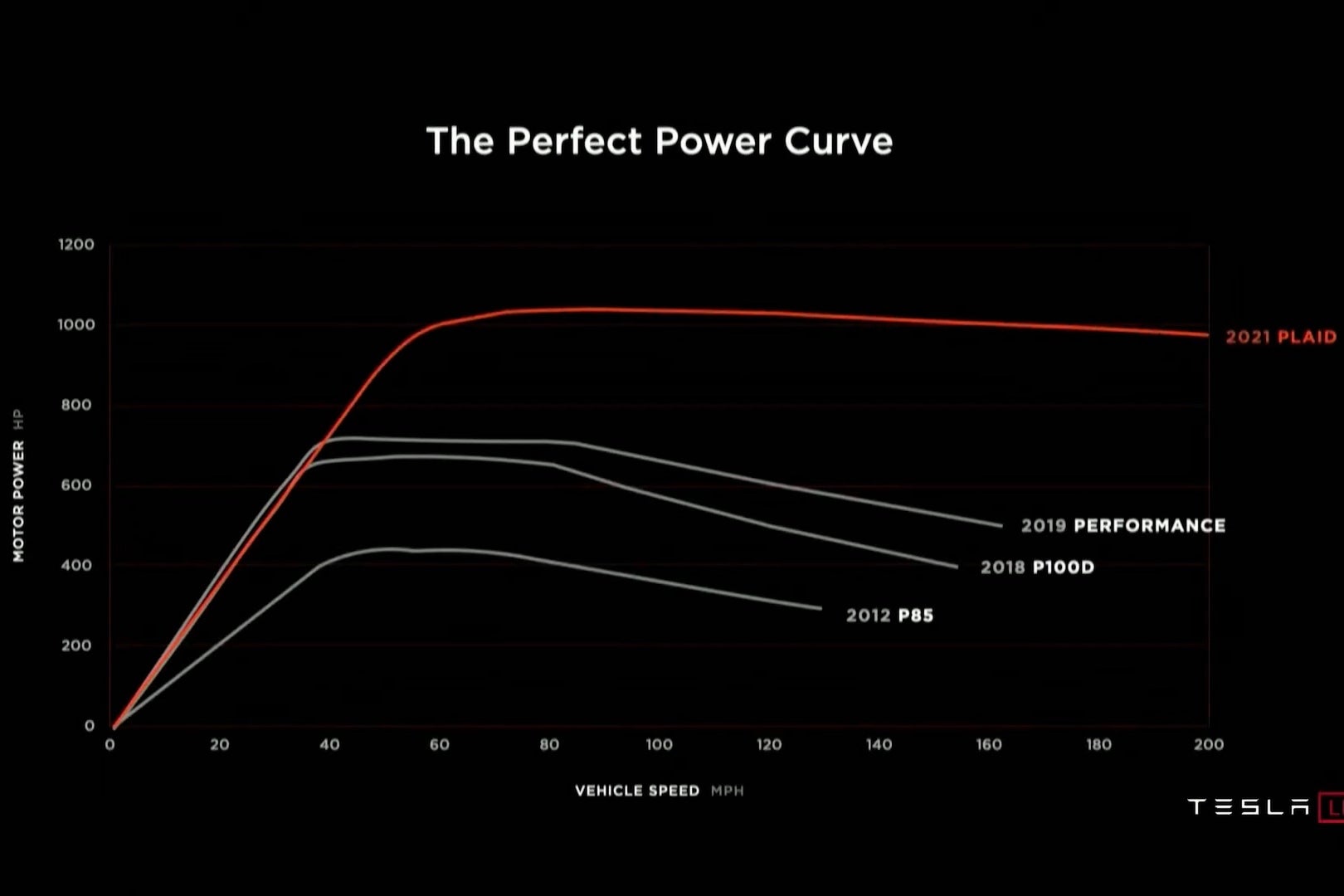 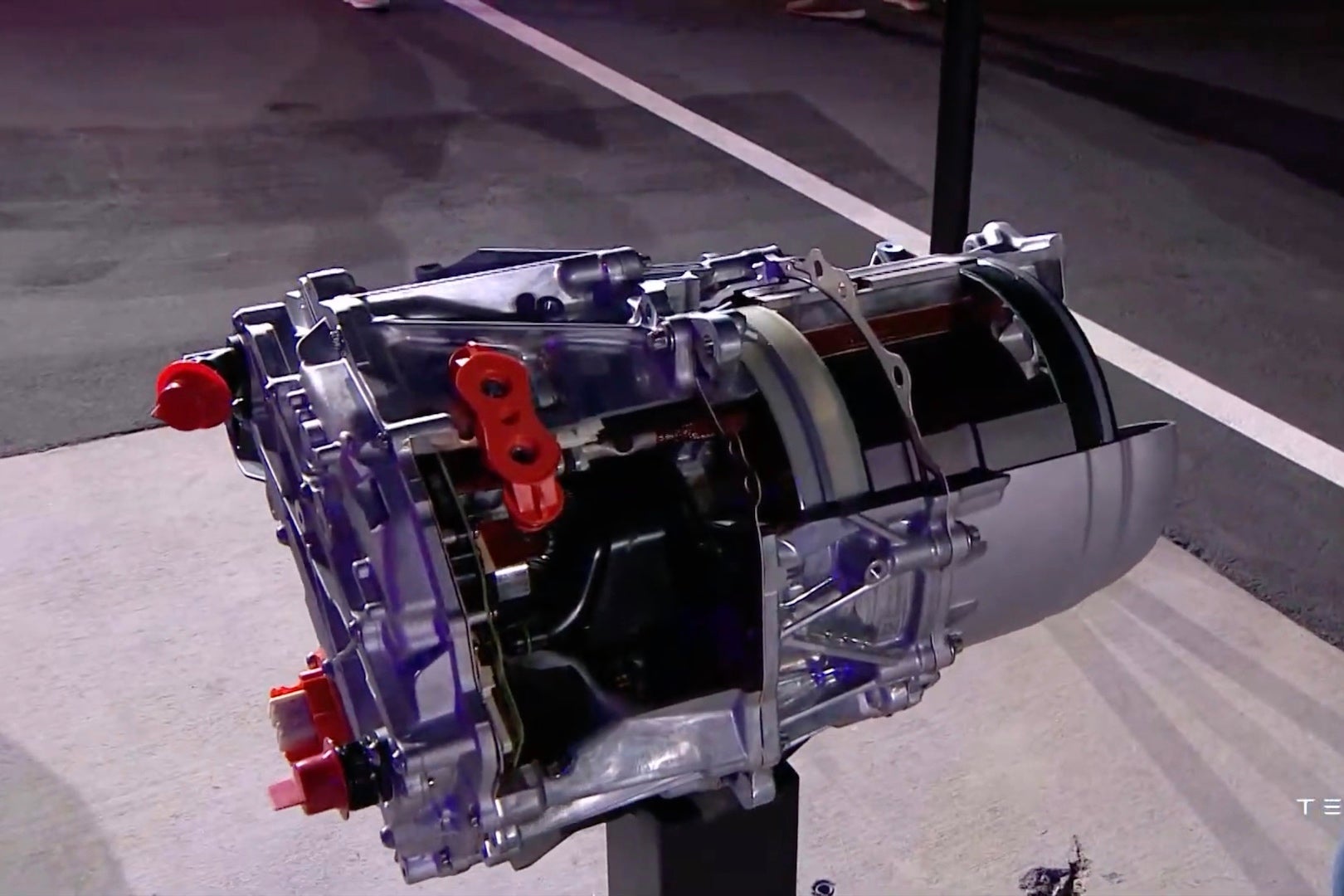 Powering this performance is an “all-new battery pack” of unspecified capacity, which when not used to challenge performance car superlatives can eke out a claimed range of 390 miles. This the Model S Plaid does with the help of a slim drag coefficient of 0.208, with Tesla claiming to be the lowest of any production car in history, though the electric Mercedes-Benz EQS also boasts a figure of 0.20. Also, the GM EV1 achieved 0.19, so again, it would seem Tesla has more research to do before it claims supremacy. 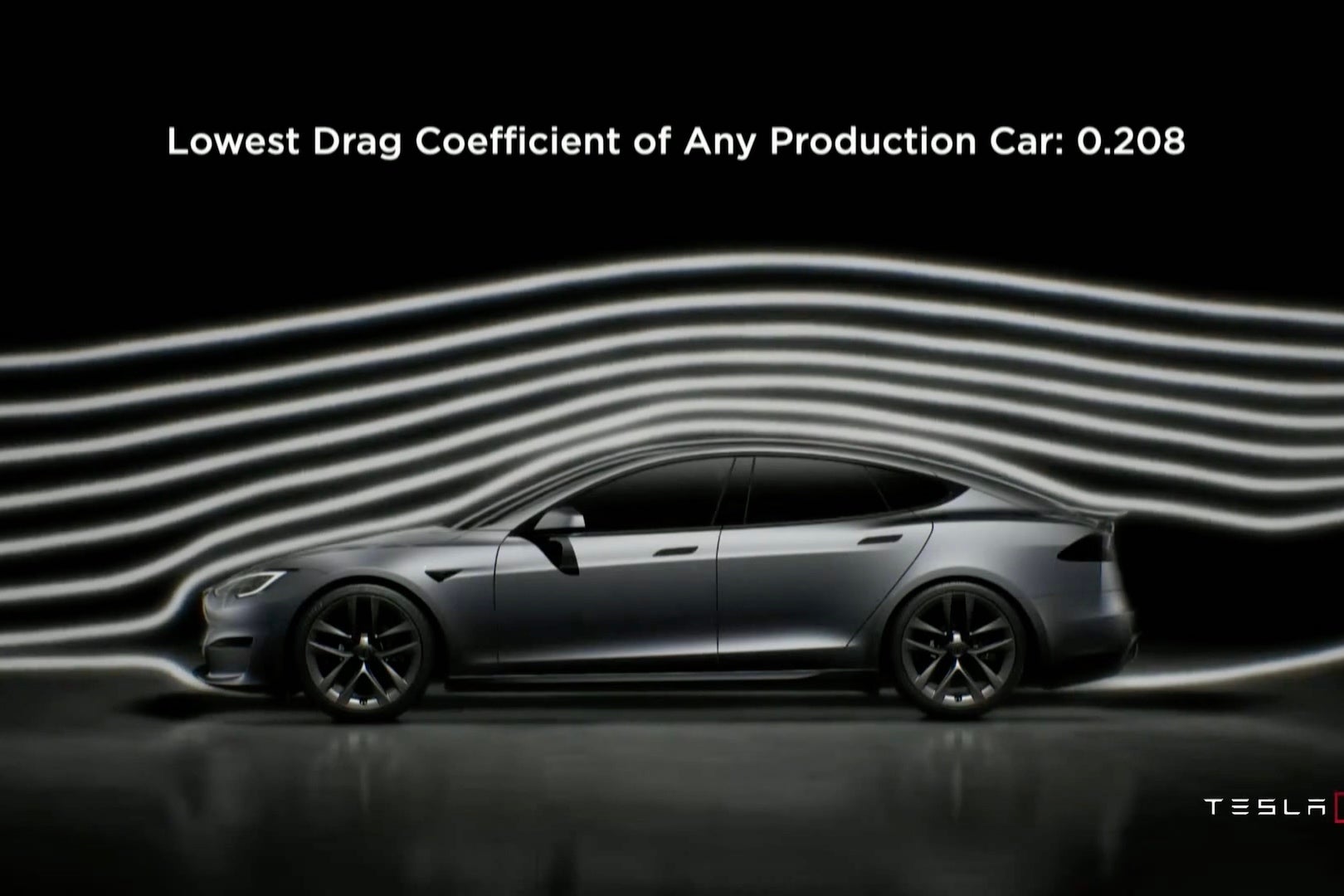 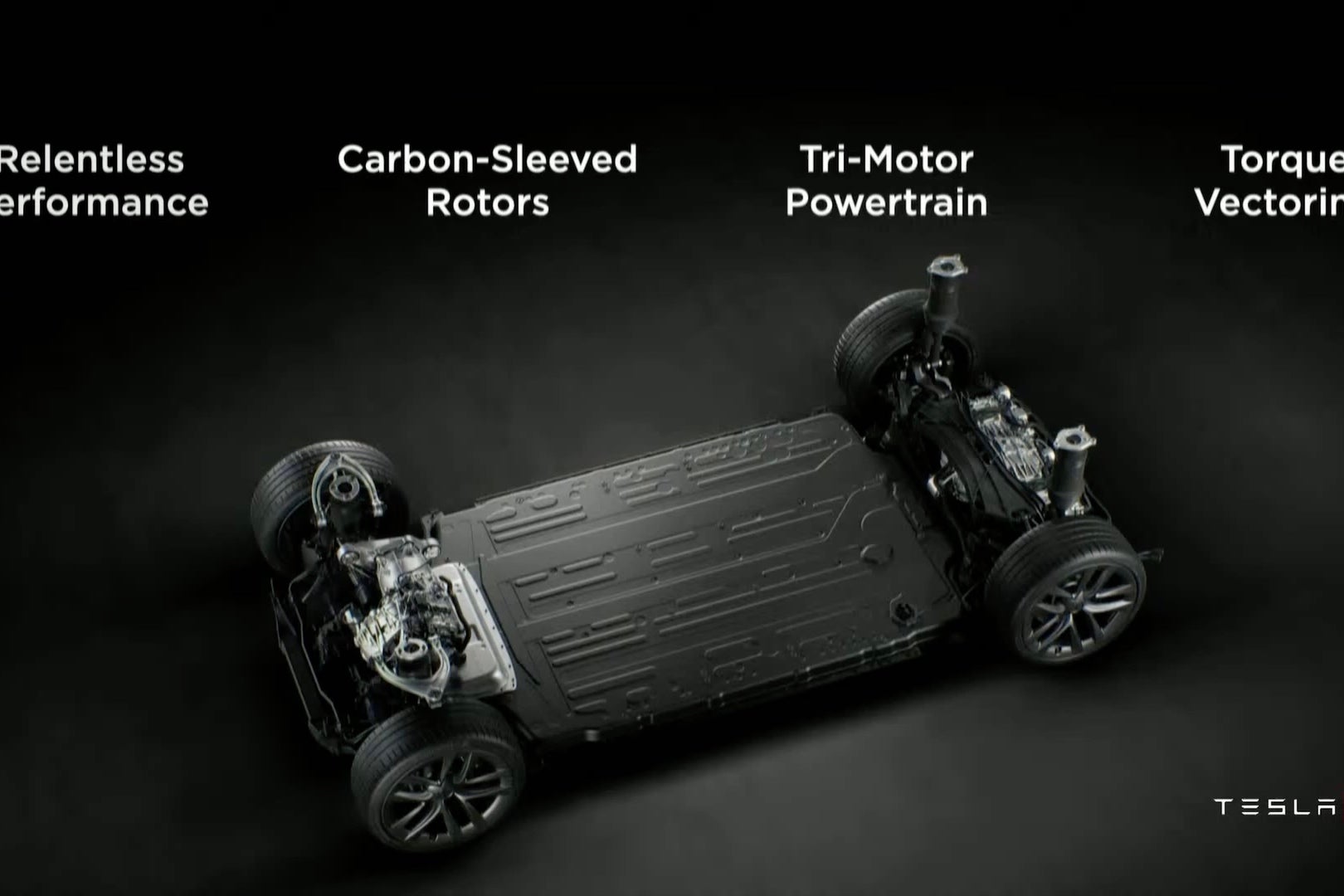 For the Plaid, Tesla doubled the size of the battery’s heat exchanger, giving it greater tolerance for charge and discharge and the ability to maintain performance on track. This also permits the Plaid to recharge up to 187 miles of range in as little as 15 minutes, and with the aid of an onboard heat pump, lose 30 percent less range in cold weather, in which EVs often struggle. The entire heat management system uses 50 percent less energy than previous models, permitting occupants to use its tri-zone, ventless HVAC system without a care in the world.

Said cabin has been fully redesigned, and integrates the new yoke-style steering wheel—it appears the NHTSA hasn’t deemed it illegal after all. Tesla has also deleted the Model S’s steering wheel stalks due to Musk’s stated belief that “all input is error. […] If you have to do something the car could’ve done already, that should be taken care of.” 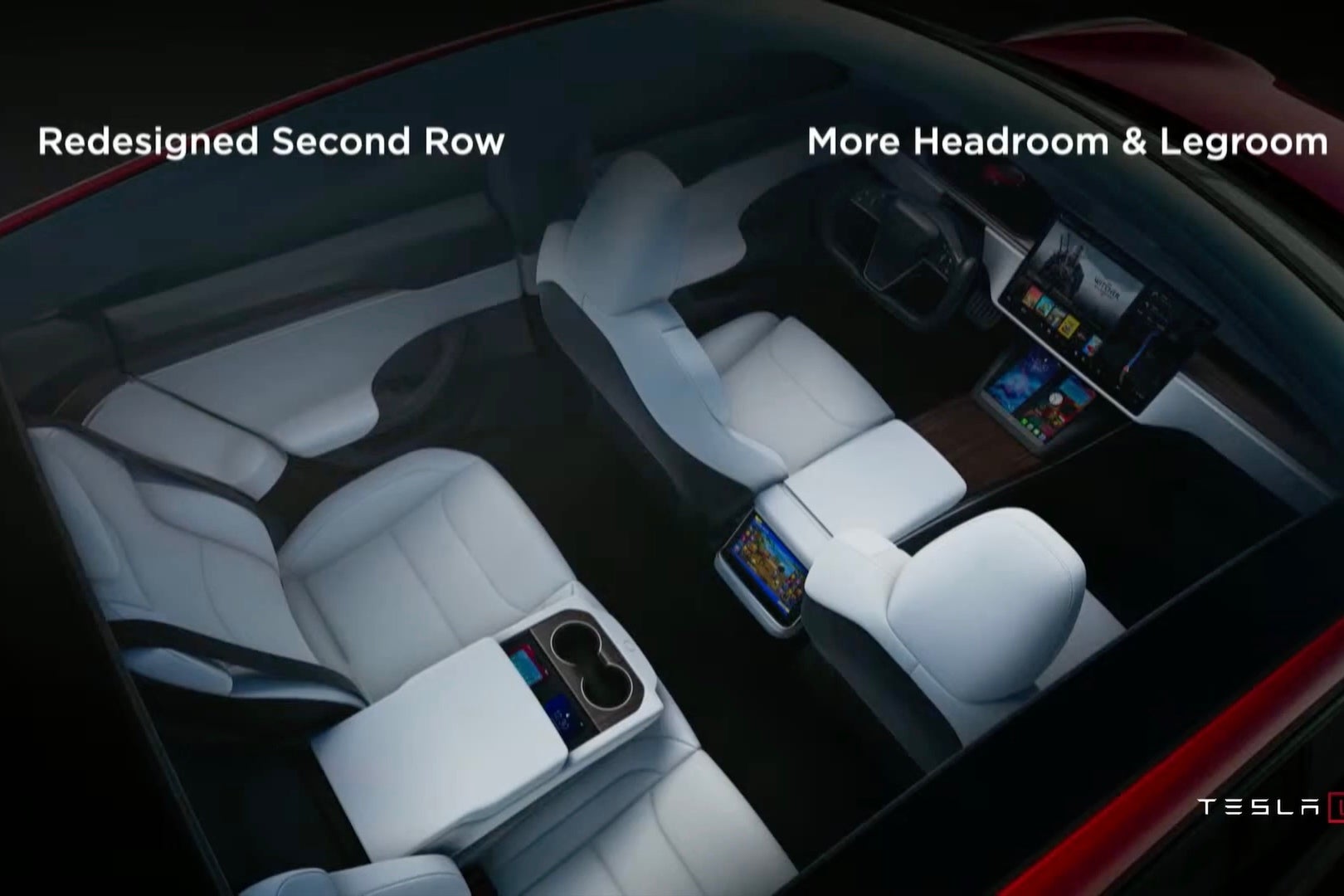 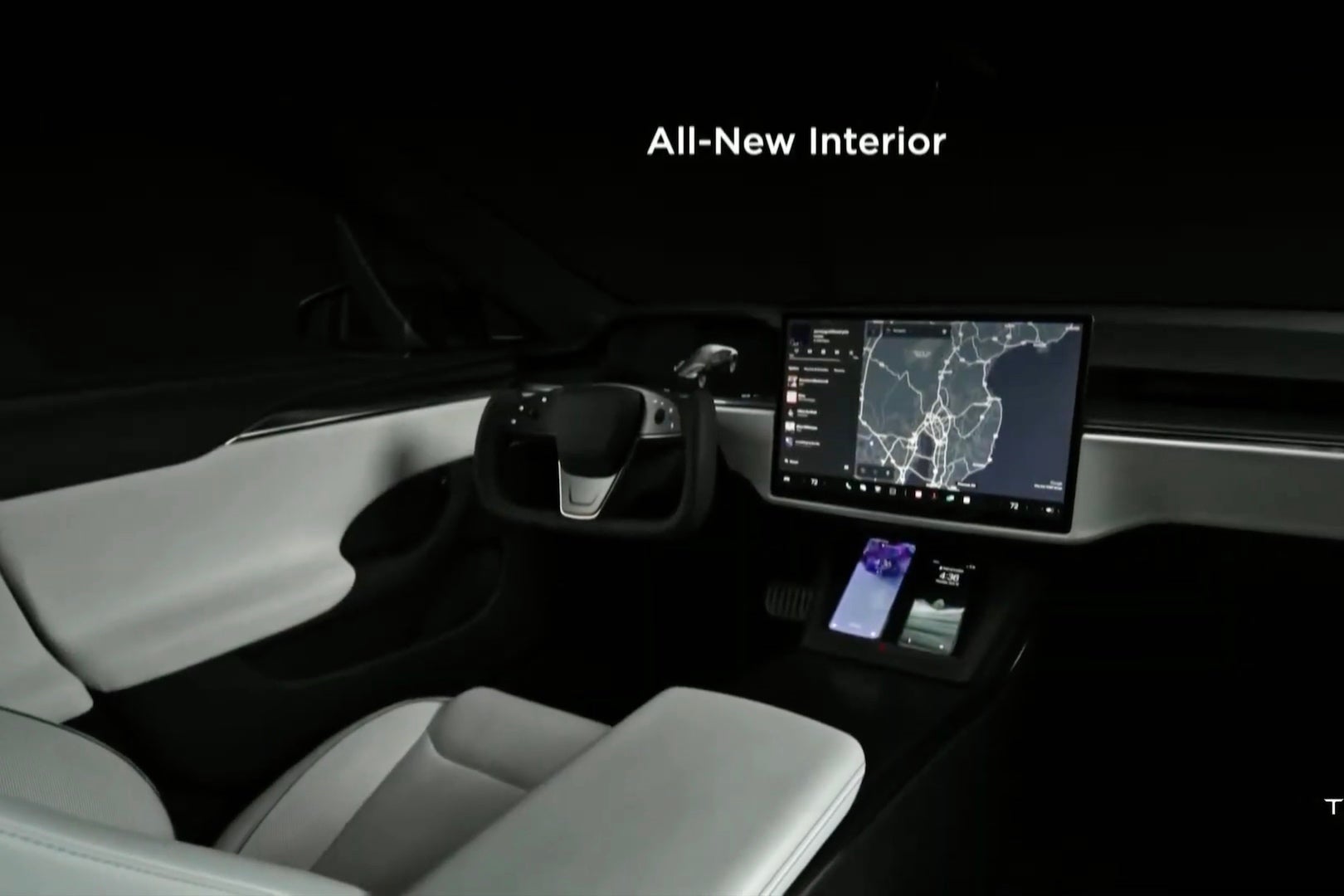 To that end, the Plaid has a fully automated startup procedure. Come into the car’s proximity, and the door handles are supposed to (but might not always) extend on their own. It then uses the not-quite-reliable Autopilot system’s cameras to guess whether the driver wants forward or reverse, which in time will decide using data Musk says is “geocoded to that location” to simplify commutes. Navigation also now automatically syncs with owners’ calendars to automatically set directions, which the car dictates through a 22-speaker, 920-watt sound system. 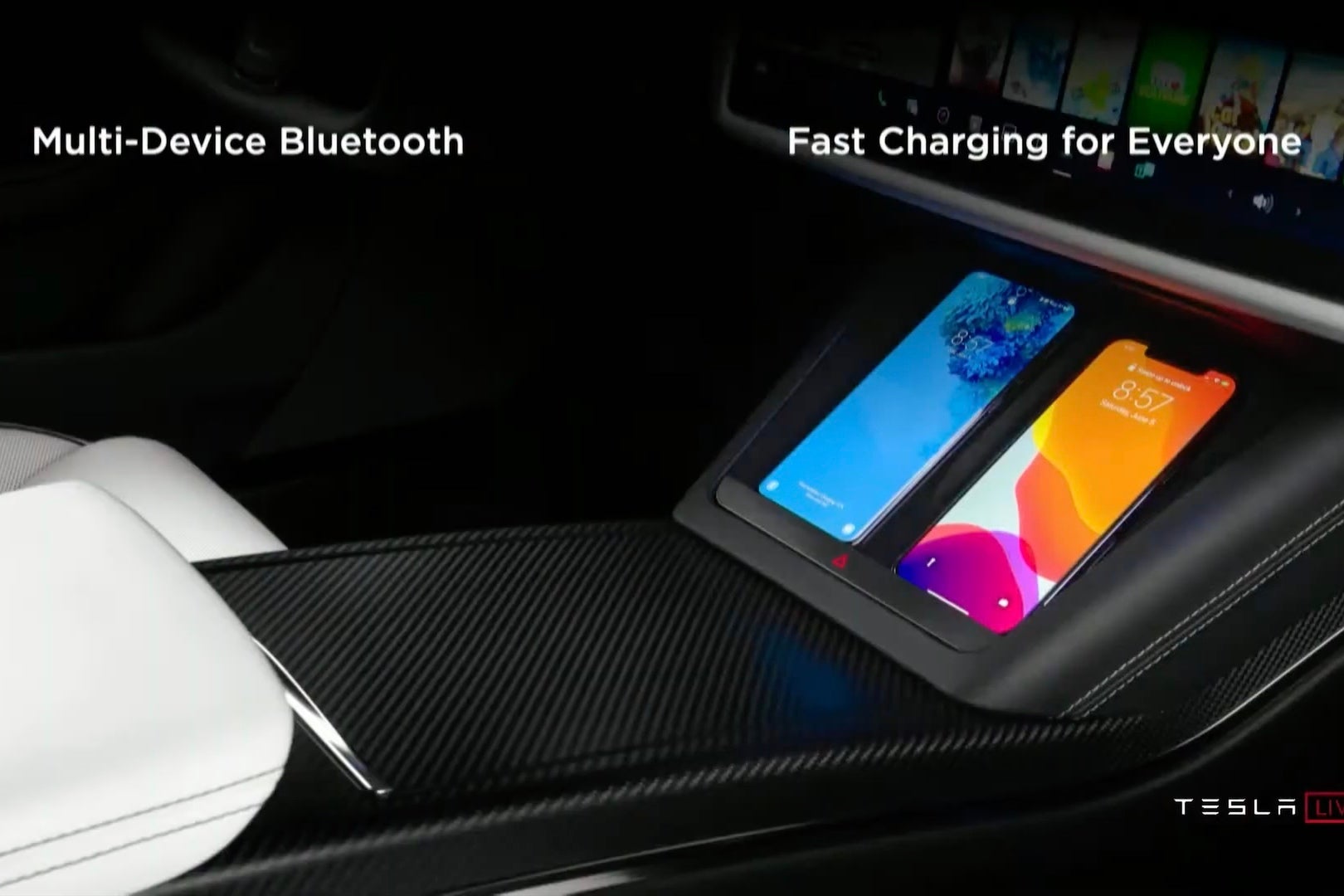 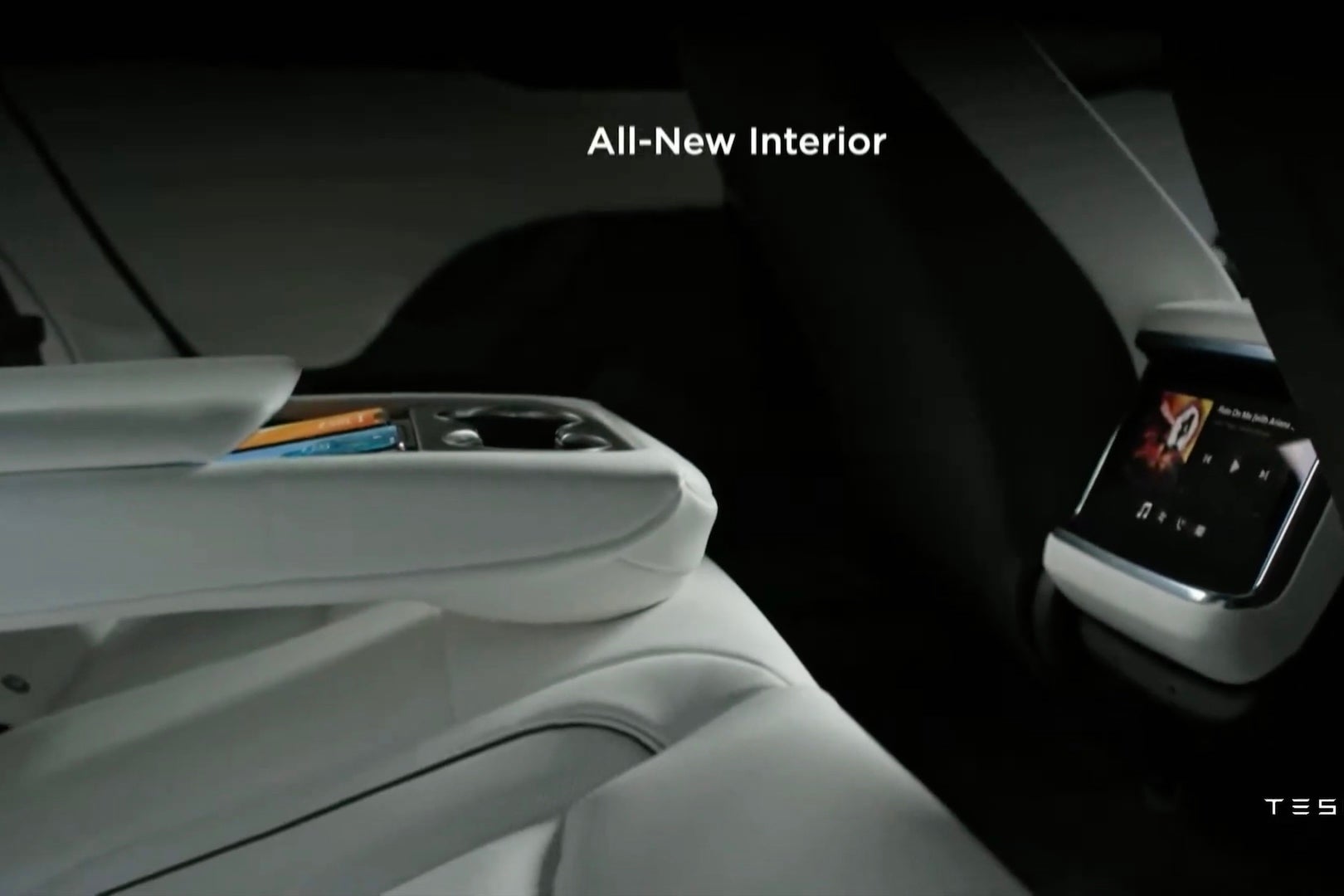 Tesla turned up the Plaid’s interior technology, which now includes 36-watt onboard charging, simultaneous multi-device Bluetooth pairing, and twin inductive chargers for both the front and back seats, the latter of which have been redesigned for additional space and are further reclined. The centerpiece of the interior, though, is still the front infotainment touchscreen, now 22 inches across with 2200 by 1300-pixel resolution and a new, configurable UI.

The new infotainment system is said to have processing power equal to a Sony PlayStation 5, and offer the capability to play modern video games at 60 frames per second. Musk emphasized that onboard entertainment options such as this will be “increasingly important” in a future where Autopilot or Full Self-Driving allows all occupants to divert their attention from the road, though such a future is by Tesla’s own admission not yet possible. 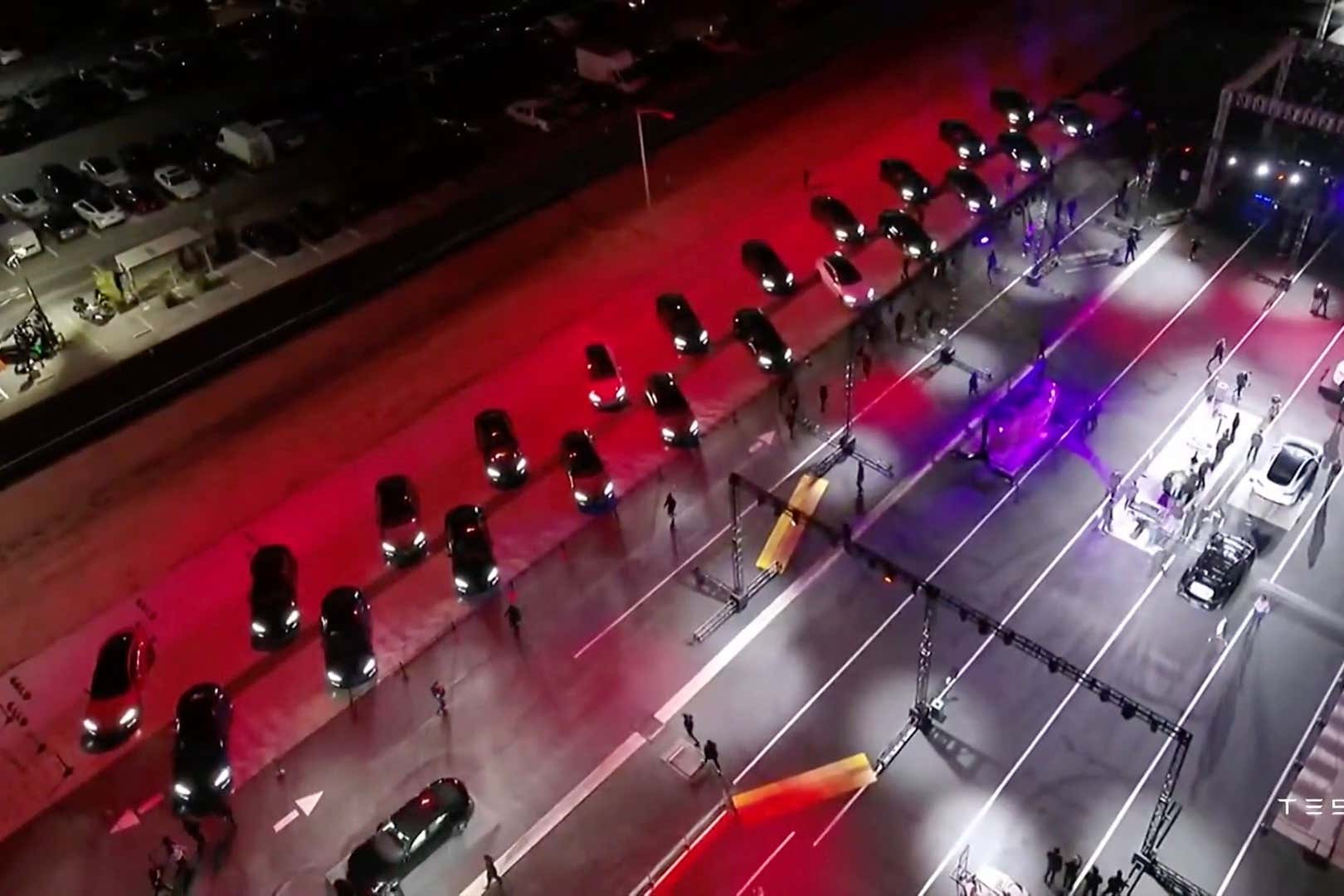 Being a delivery event, Tesla handed off the first 25 examples last night, which Musk says will “soon” be followed by several hundred cars weekly, and as many as 1,000 weekly next quarter. Musk also hinted Tesla could return to the Nürburgring, obviously for another crack at the electric production car record; a hotly contested subject with no set standard for what constitutes a production car or a complete lap.

What those of us who didn’t take delivery of a Model S Plaid last night come away with is a new batch of promises, which Tesla and its customer cars must now fulfill. Promises are, of course, the currency on which Elon Musk and Tesla trade—in addition to cryptocurrency and regulatory credits, that is.

Weird GM Design Sketch Is 'Mean' But What Is It?
Car Reviews