Home » 2021 Jeep Wrangler Rubicon 392 Review: The V8 Wrangler Is Just as Rowdy as You Think

2021 Jeep Wrangler Rubicon 392 Review: The V8 Wrangler Is Just as Rowdy as You Think

Snap! That was the audible sound of my neck slamming into the headrest as I mashed the skinny pedal and was launched into the next county. My body compressed against the seat, the Jeep Wrangler Rubicon 392’s front end lifted, and the speedometer spun past 40, 60, 80 mph.

And though the front end lifted, my happy right foot didn’t—at least, not until hitting the vehicle’s top speed in short order. There was plenty more on tap, I could feel it, but 99 mph was the max tire speed. Regulatory stuff. I eased up and coasted to the top of the hill, turning off on a dirt two-track. It was an adrenaline rush to remember. When was the last time anyone said that about driving a Jeep Wrangler? 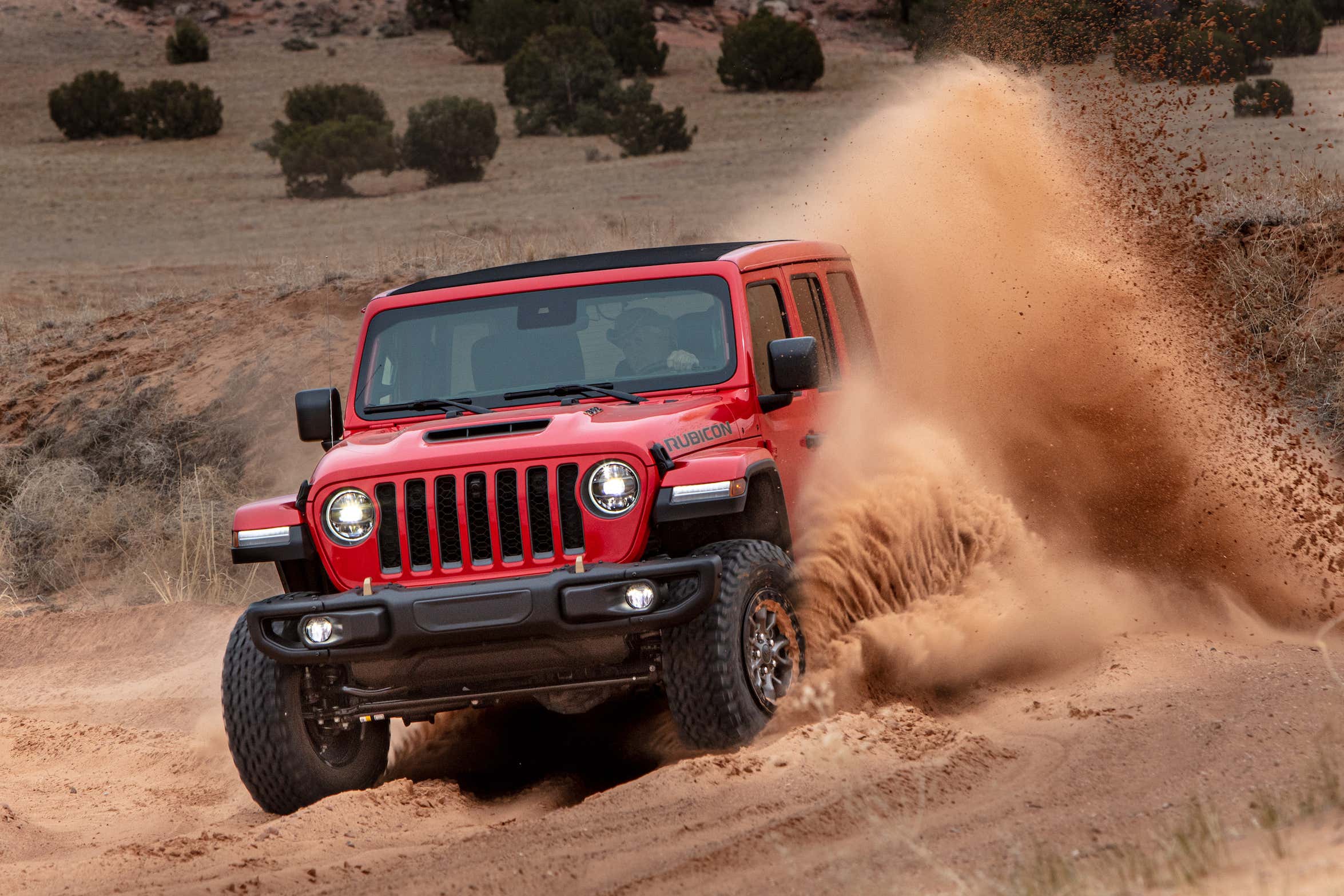 Enthusiasts have waited more than four decades for Jeep to give us the throaty notes and performance of a V8 under a Wrangler hood. Building one ourselves with a Hemi crate motor—which several aftermarket companies do provide—could have easily bumped the overall price point by 50 percent over MSRP. And prior to the Rubicon making the scene in 2003, I’d also have to sell my first-born child to install lockers and low-range transfer gears to get a true V8-powered rock-crawler. Jeep teased fans with the 392 Concept last year, but it was clear it had bigger plans up its sleeve.

Let’s dispense with the obvious—yes, the 2021 Jeep Wrangler Rubicon 392 is a completely irrational machine. There is no reason for it to exist other than people thinking it’s a goddamn sweet idea to drop a V8 in a Wrangler, and Jeep thinking there’s some real money on the table in that. And you know what? They’re right. There are quicker, faster, more comfortable vehicles. There are definitely more efficient ones. But there is nothing else that can replicate the experience of a 470-horsepower, doorless garden shed flying over a sand dune, scrambling over impossible terrain, then gapping a base Mustang on the way home.

At a casual scan, the 2021 Jeep Wrangler Rubicon 392 looks like any other four-door Rubicon, but a keen eye will notice subtle differences.

The first is that it sits higher—two inches more than the Sport and an inch higher than the Rubicon—to accommodate the additional height of the motor. There is a forward-facing off-road camera in the middle of the grille and the slats have been widened to provide additional airflow. It has the standard steel Rubicon bumper, but bronze-colored recovery points. 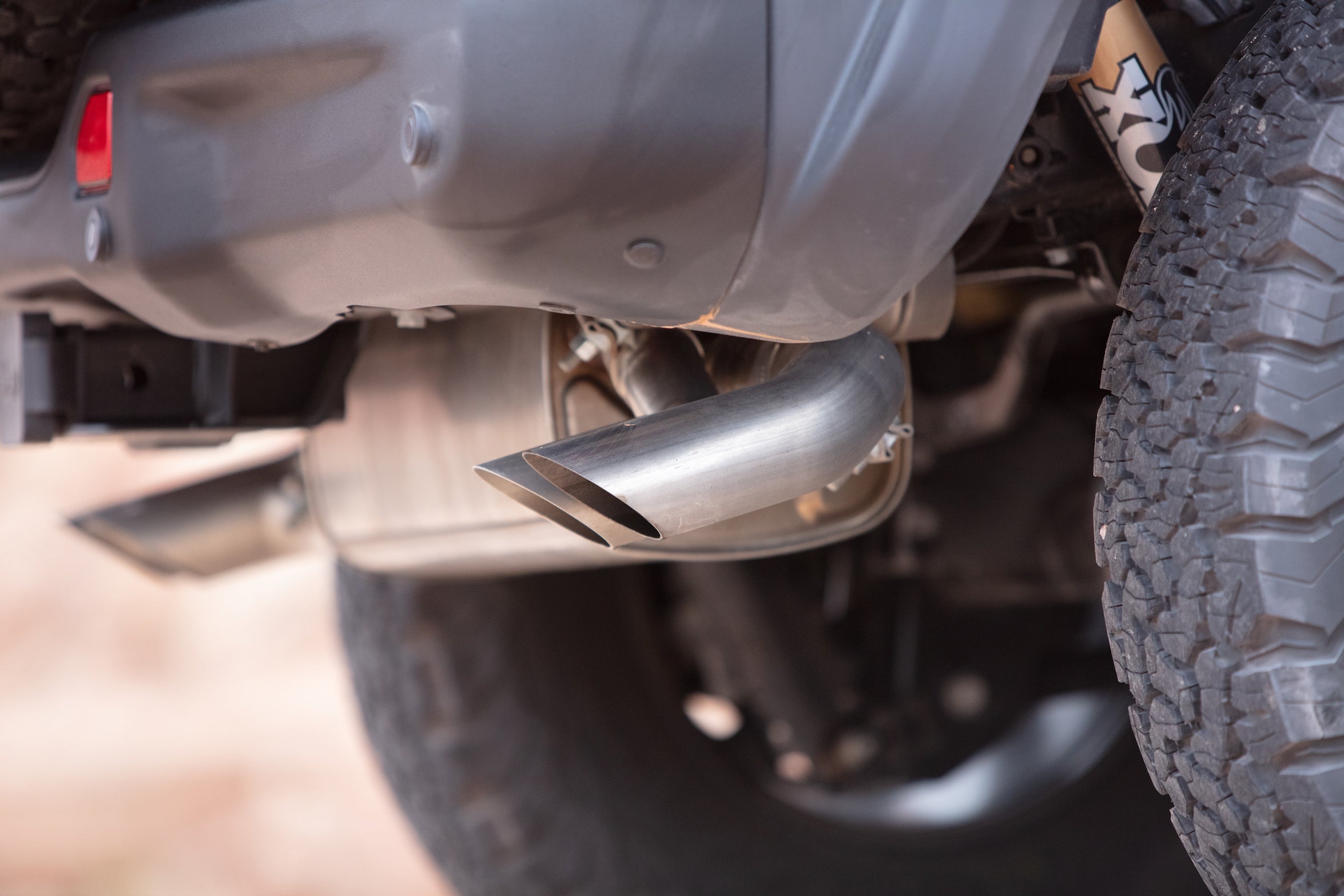 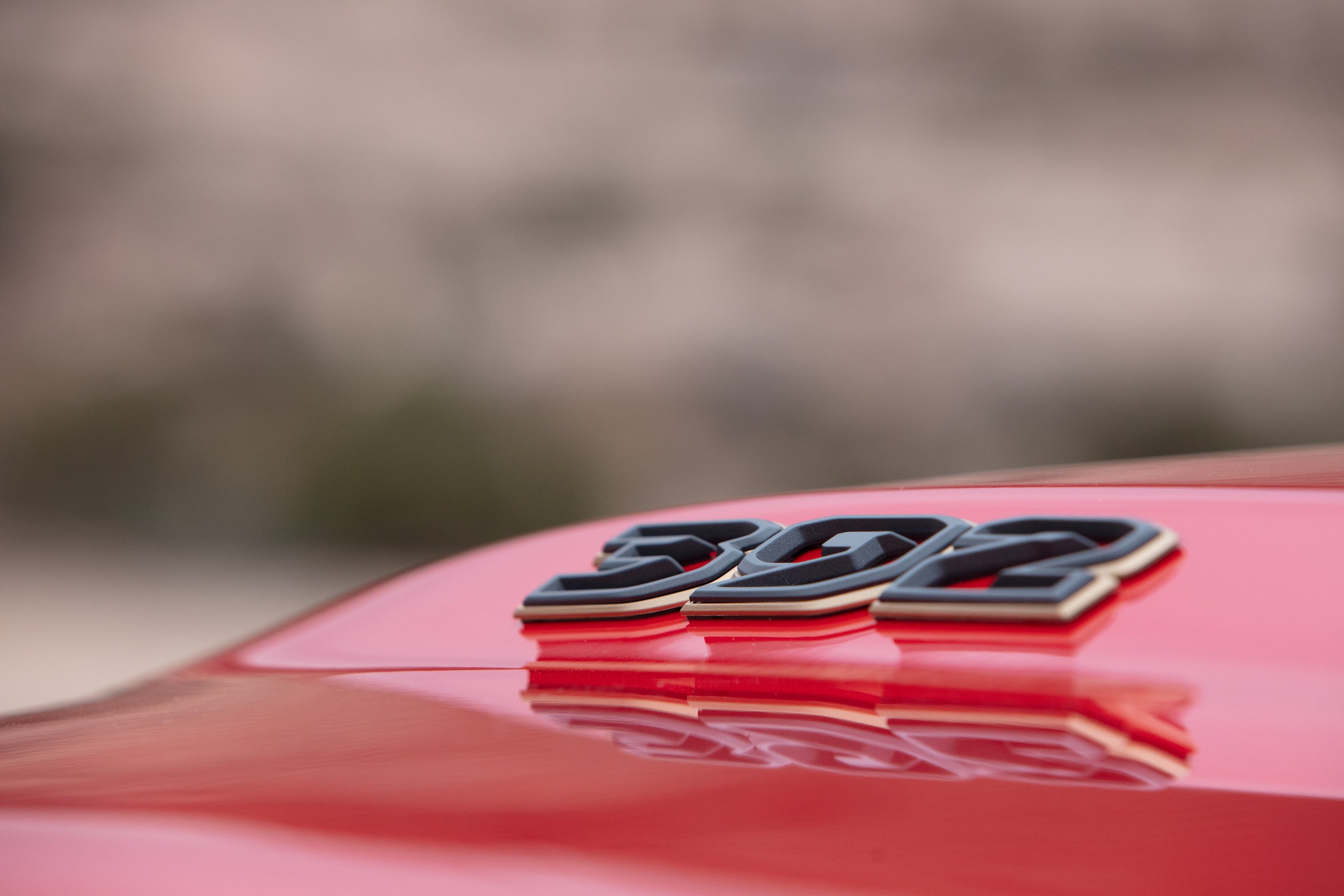 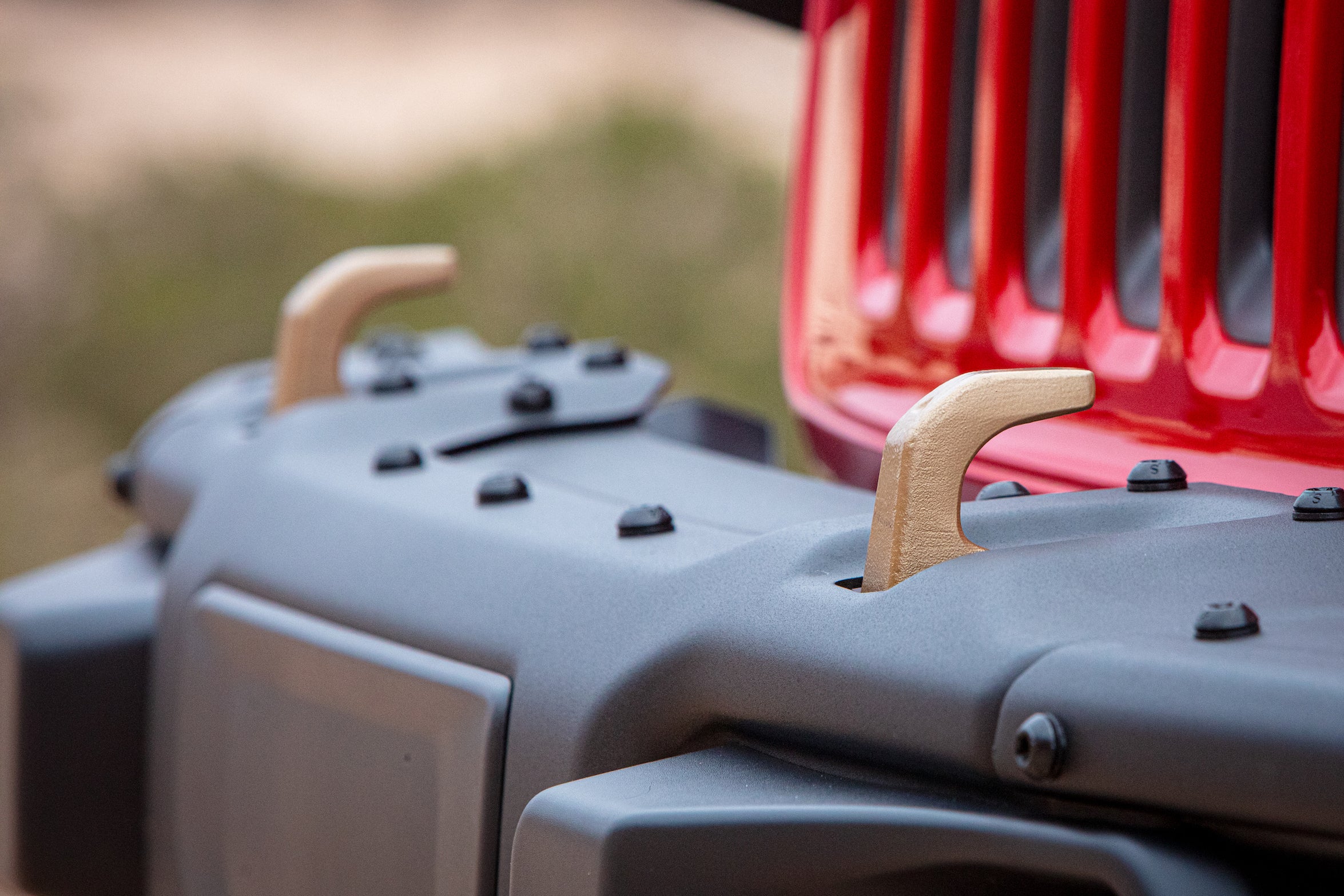 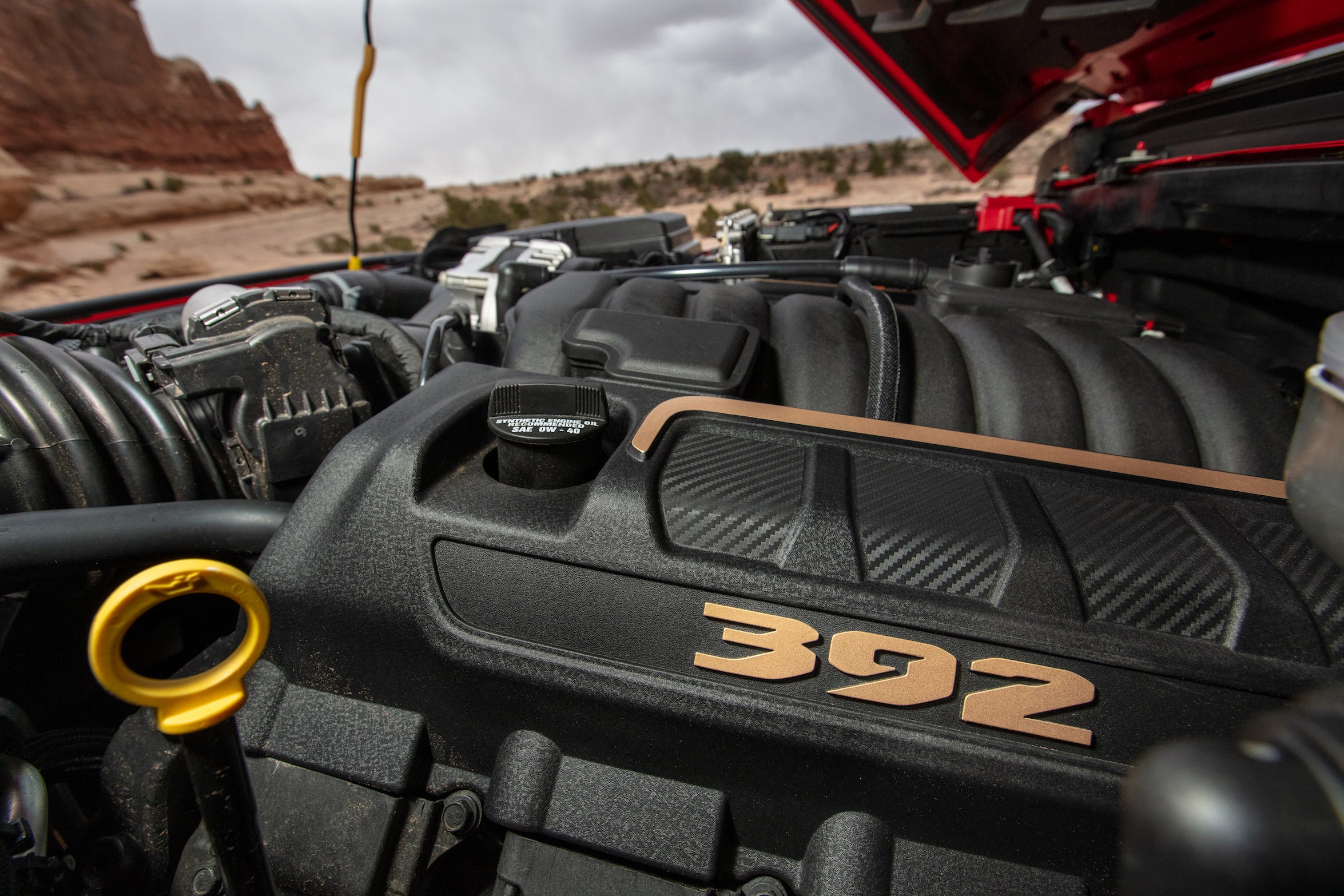 Across the hood—borrowed from the Mojave, and tweaked with a functional hood scoop that’s specifically designed to prevent accidental water ingestion—the 392 badging gives away the game. To each side are steel rock sliders, and out back there are four tailpipes tucked under the rear bumper. Down below are Jeep’s new beadlock-capable wheels and 33-inch BFGoodrich All-Terrain tires.

In short, it is the Rubicon we know and love—with some new accouterments.

When it comes to the cabin, the 392 took styling cues like orange accents from its Gladiator Mojave sibling, but otherwise this is the same Wrangler cabin that’s been with us since 2018. It’s comfortable, though—lumbar support, headrests, and more pronounced bolsters tuck your body in place like a cocoon. The shifter, 8.4-inch Uconnect screen, and all controls are at a comfortable arm’s reach. 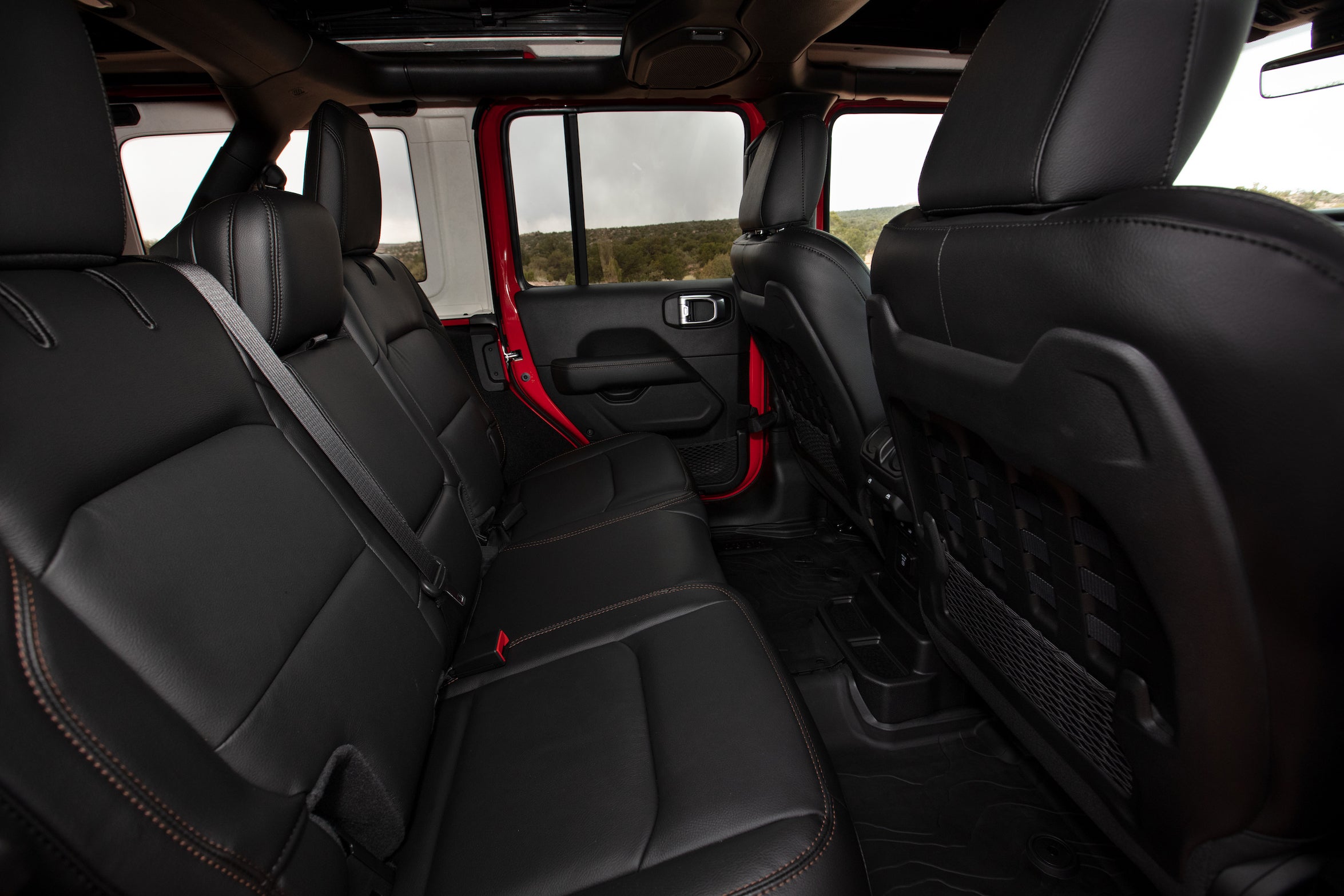 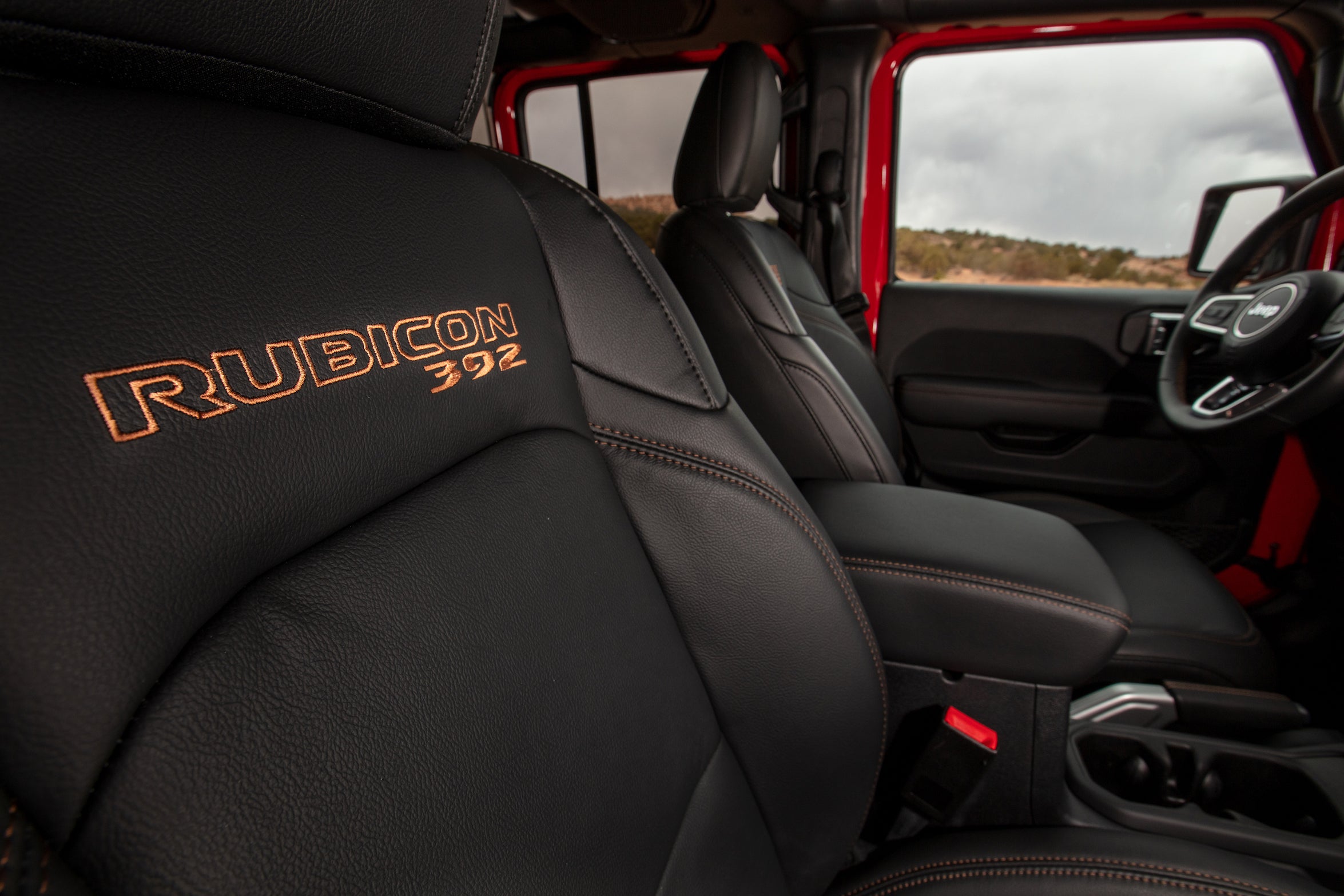 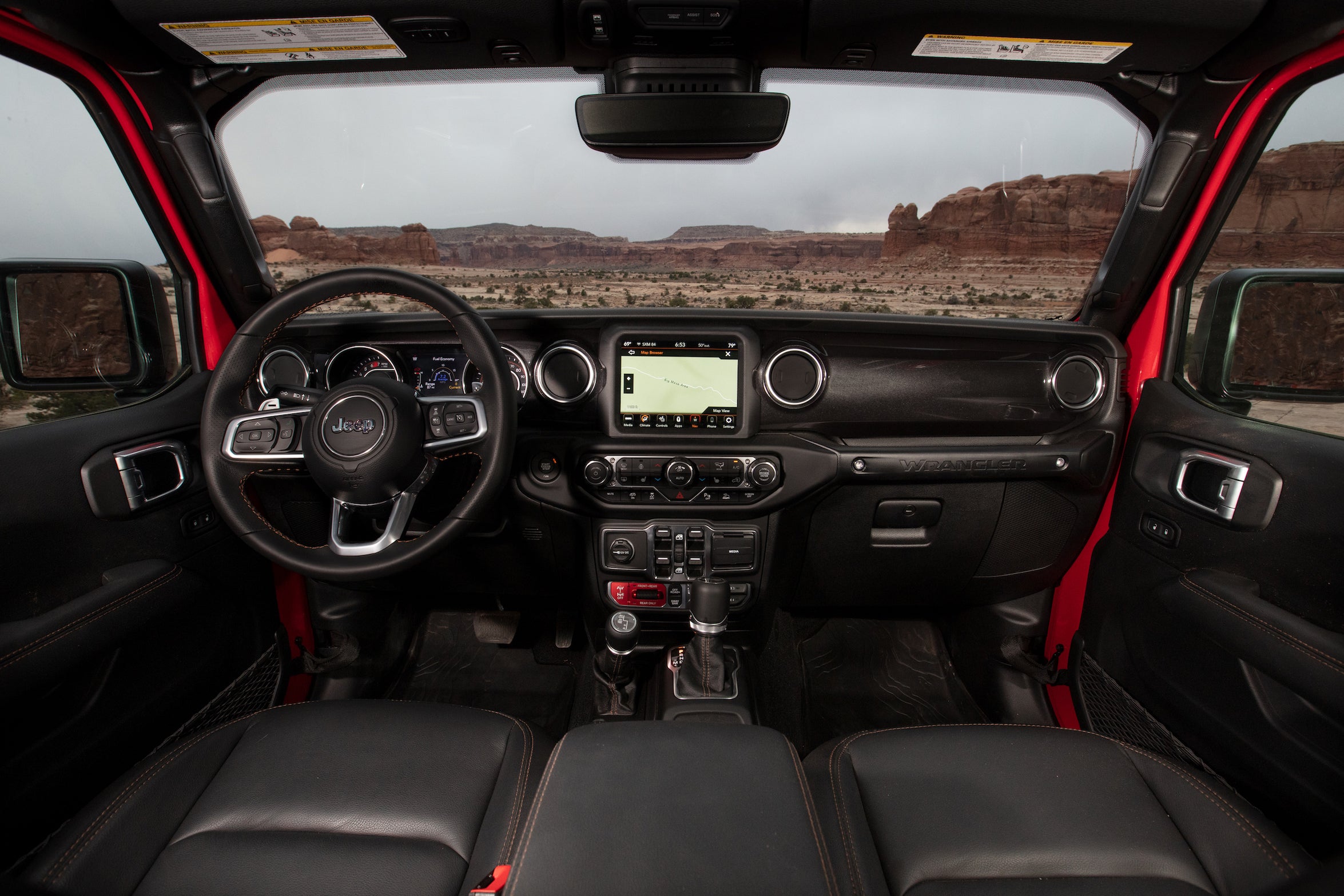 At your fingertips are paddle shifters (yes, your Wrangler is now an F1 car) and bronze stitching accents extend throughout the interior. Toggling through the apps screen, I found the forward-facing off-road camera, which provides a wing-to-wing view of the bumper and immediate foreground. Useful for spying on treacherous terrain. Locker controls rest in front of the four-wheel-drive shifter, allowing rear or front-and-rear engagement at the flip of a switch.

If the 392 borrowed interior cues from the Mojave, it downright stole the 6.4-liter Hemi from the SRT Grand Cherokee. And why wouldn’t it? That engine is a fire-breathing monster with a proven track record of performance and reliability. Retuned for the dirt, it’s the perfect choice for this application.

The naturally aspirated V8 cranks out 470 horsepower and 470 pound-feet of torque, and is backed by an eight-speed automatic and an MP3022 Select-Trac transfer case. The 392 also sports a new intake system known as Hydro-Guide: Drawing from that hood scoop, it provides cooler air to the engine while vacating water up to 15 gallons per minute—perfect for those moments when you dunk the front end in a river and the bow wave rolls up to the windscreen. It can ford 32.5 inches of water, the most of any Wrangler. 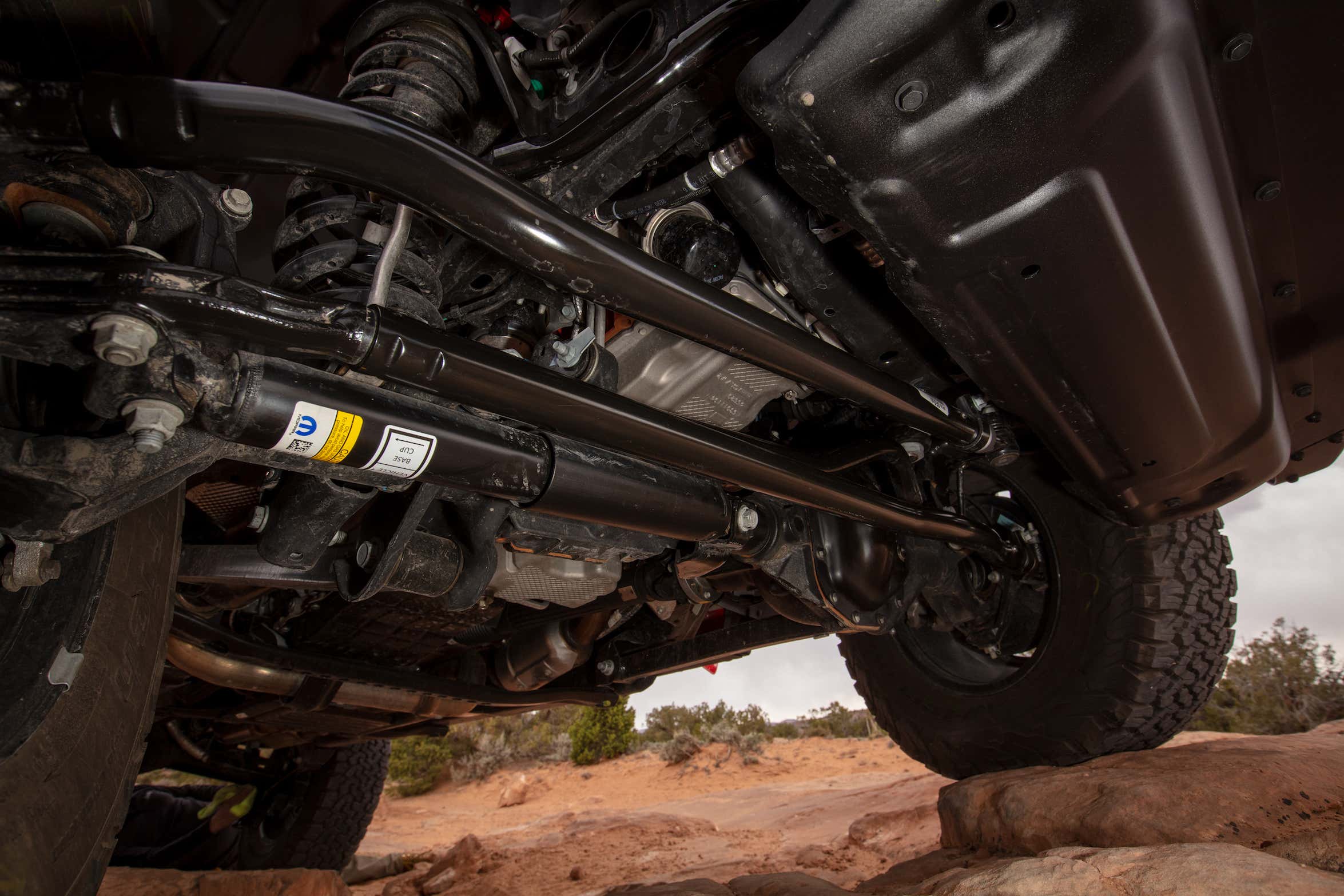 While the standard Rubicon comes with coil-linked suspension, the 392’s has been modified to manage the additional power and weight of the Hemi. Front spring ratings were increased by 20 percent and the rears were decreased by 10 percent, while aluminum Fox shocks manage damping. Track bars, links, and cross members are stouter, and specific sections of the frame were re-engineered. Down below are a pair of reinforced Gen III Dana 44 axles, which feature thicker tubing and differentials found on the regular Rubicon. The brakes are the same ones off the Mojave, with 12.9-inch discs up front and 13.6-inch discs out back.

You can determine a lot about how a vehicle will perform on the street by driving it hard in the dirt. How does it manage tight cornering? Is the suspension balanced? How does it manage sharp descents or hard braking in a turn? Short of a wet skid pad and dry slalom test, a good dirt road will test a suspension well.

After a day of romping the 392 in the canyons, I can say Jeep did a helluva job on the suspension. During hard drifts on packed dirt corners, the combination of spring rates, damping, and traction rendered predictable results. At one point I came into a set of rollers while carrying too much speed—one of those “Oh, crap” moments. But despite my initial fears, nothing remotely bad happened. The Fox shocks sucked up the bumps with impressive acumen and I managed to skip through without incident. 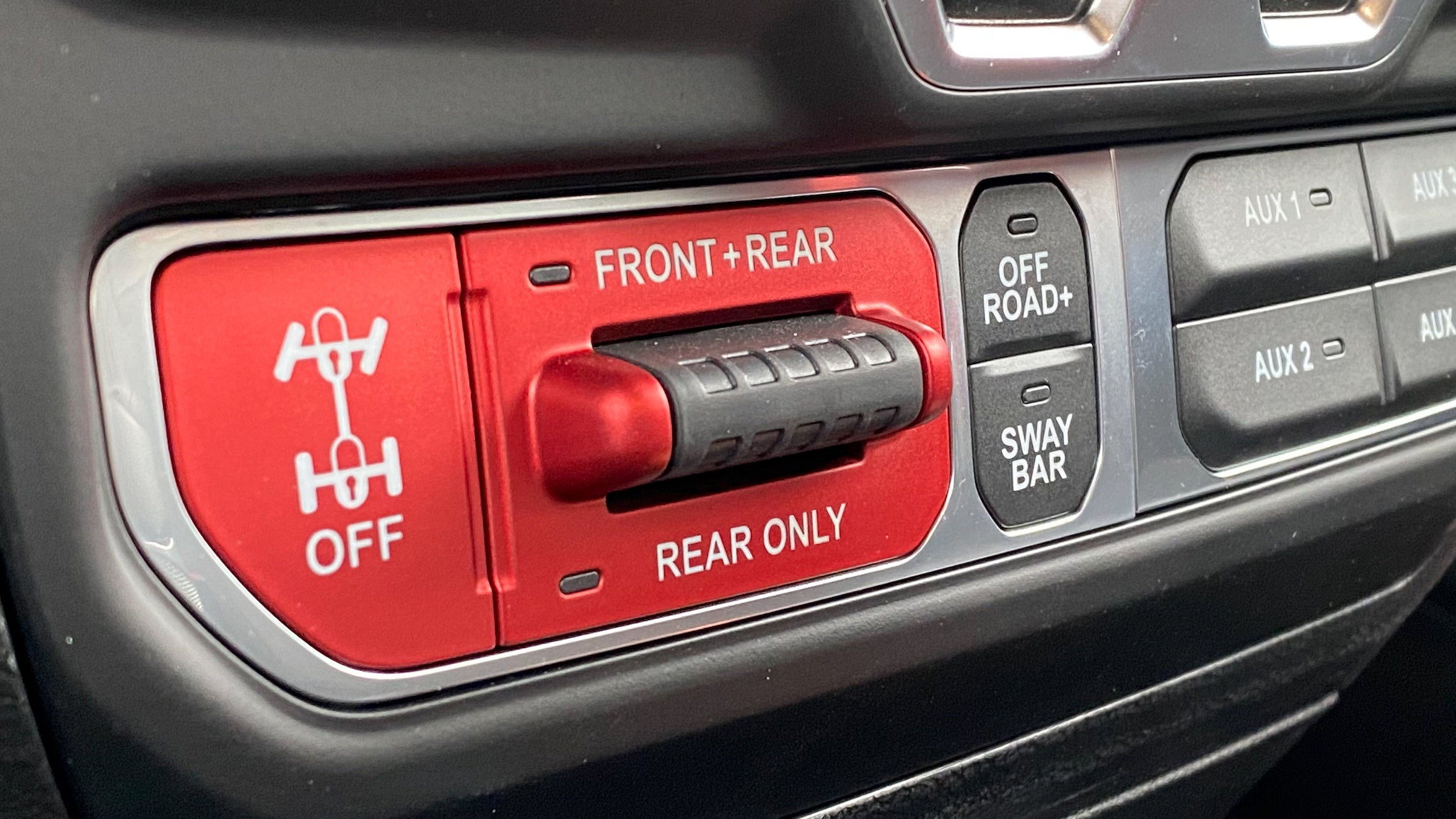 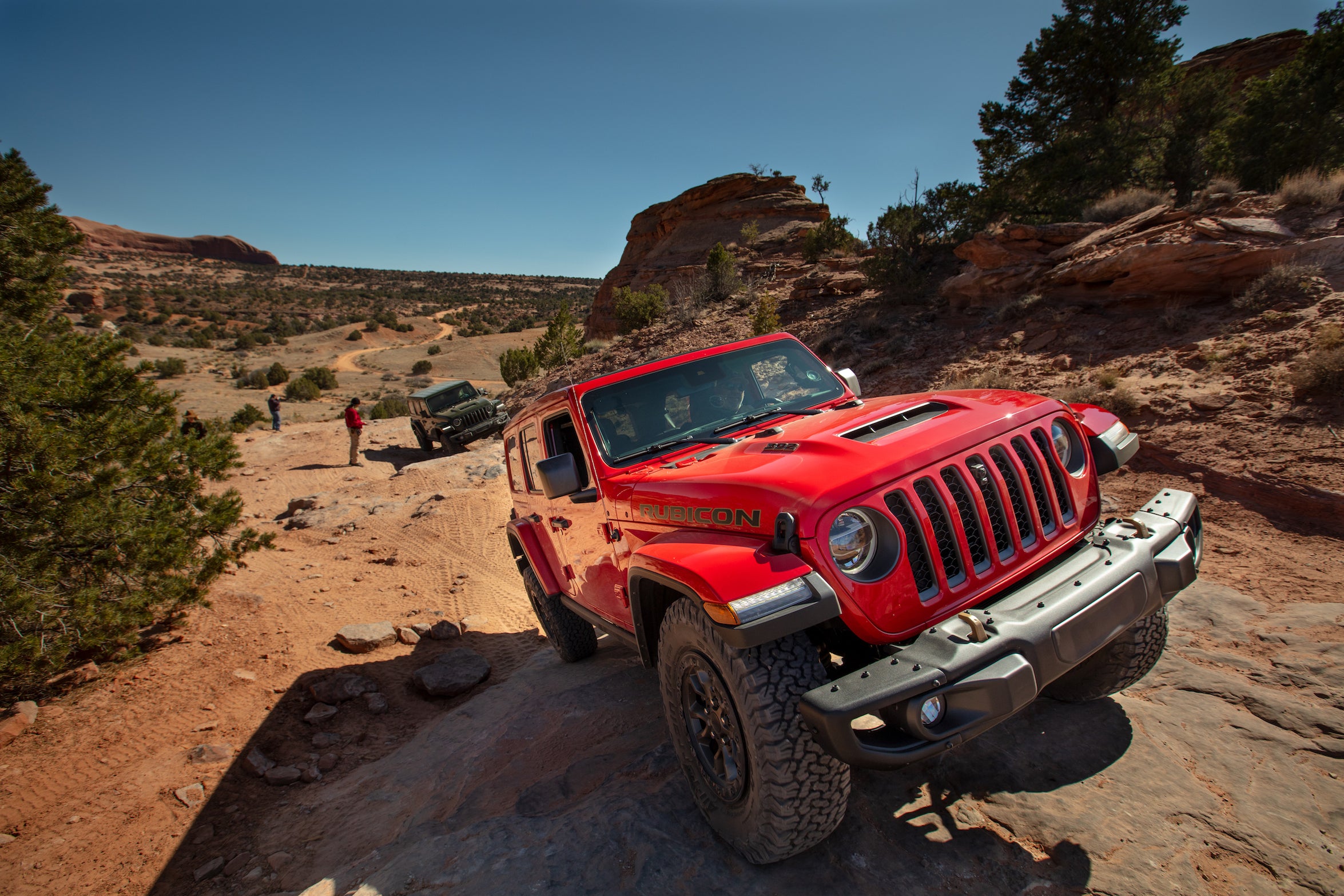 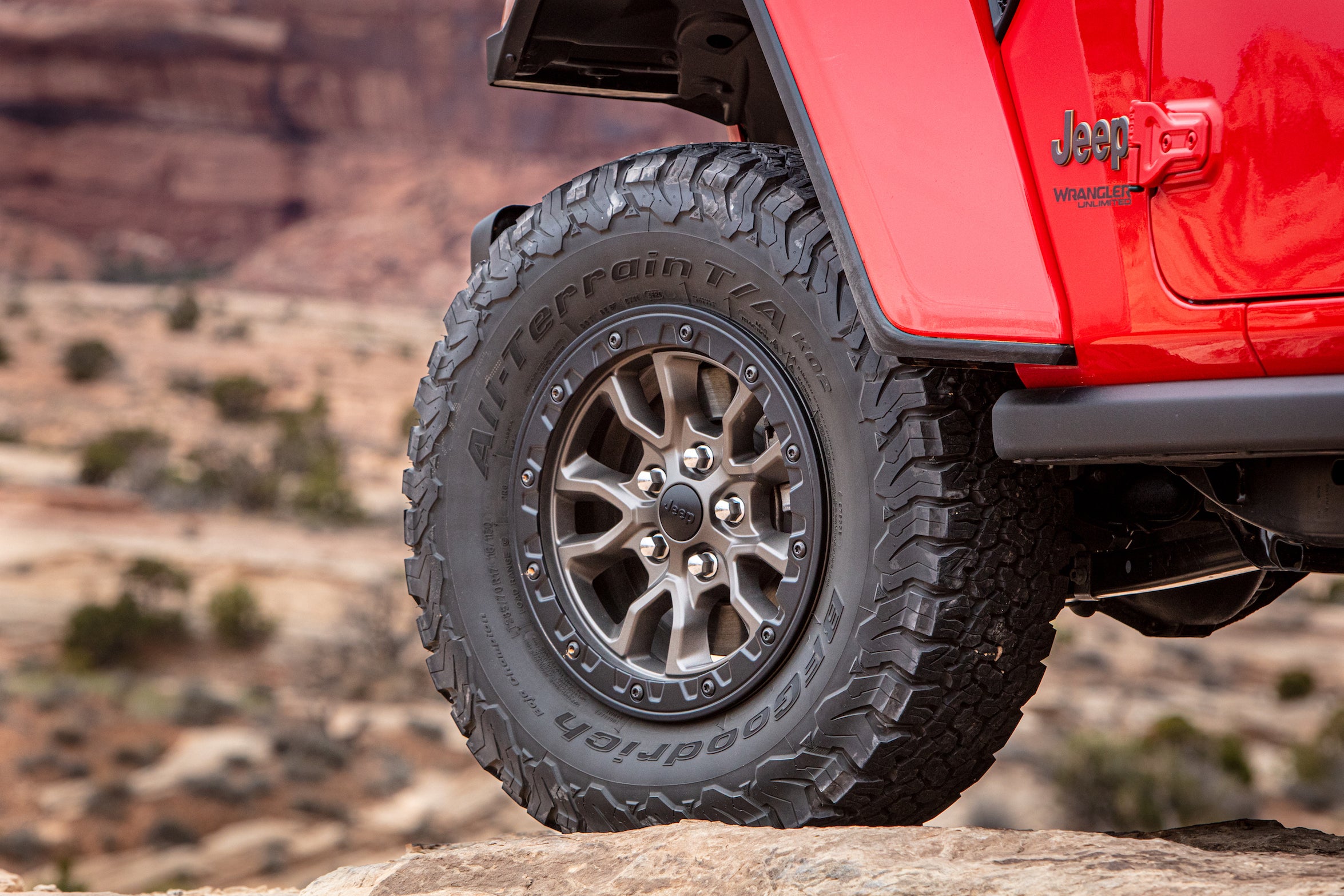 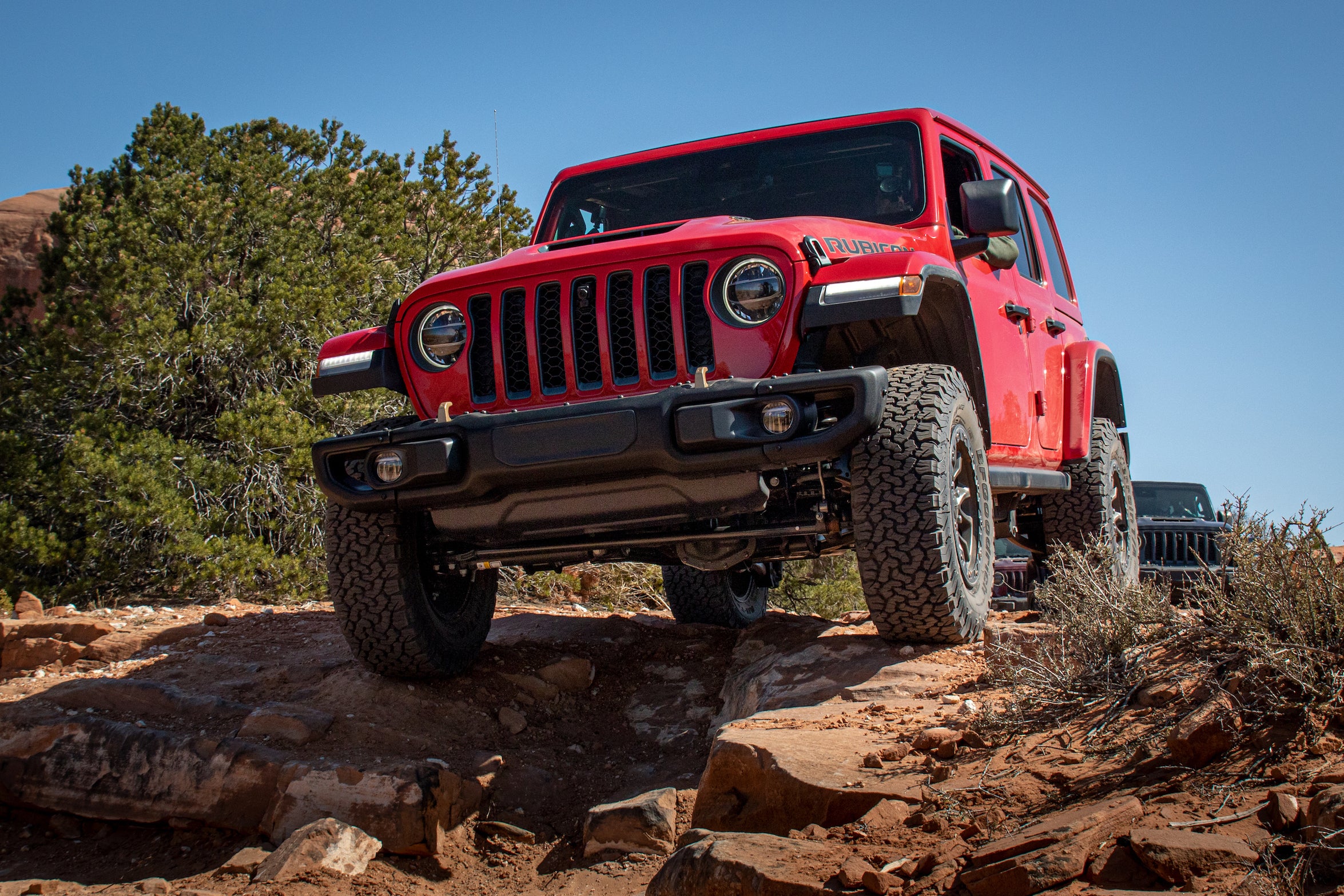 Damping—during both compression and rebound—is the word in abruptly steep surface transitions. Too little or too much and the seatbelts are the only thing keeping your head from playing Pachinko with the roof. The bottoms were firm, and porpoising on the exit was controlled. Dropping into a sand wash and shoveling in the coals was pure joy. In the dunes, well, I am talking about 470 ponies under the hood, so I was wearing ear-to-ear grins. “Predictable”—that was the operative word here. A vehicle and suspension setup that is so predictable it builds confidence and trust.

Despite the abundance of power and torque, all this fun would not be possible without Off-Road Plus mode. Pressing this delightful button modifies transmission shift points, throttle response, and de-tunes the Traction Control system. You can also permanently disengage electronic stability control, giving the driver full command—and responsibility—of the vehicle without an electronic babysitter overriding their judgment. It will also allow rear locker engagement in high range and at any speed.

In low-speed, technical terrain, the 392’s 48:1 crawl ratio doesn’t break any records. But 470 lb-ft of torque makes up for a lot of gearing and the Jeep navigated some fairly difficult obstacles without blinking. I could tell I was nowhere near the limits of this thing. But I will say the standard Rubicon’s 4:1 low-range gearing would be welcome while compression-braking down steep inclines. 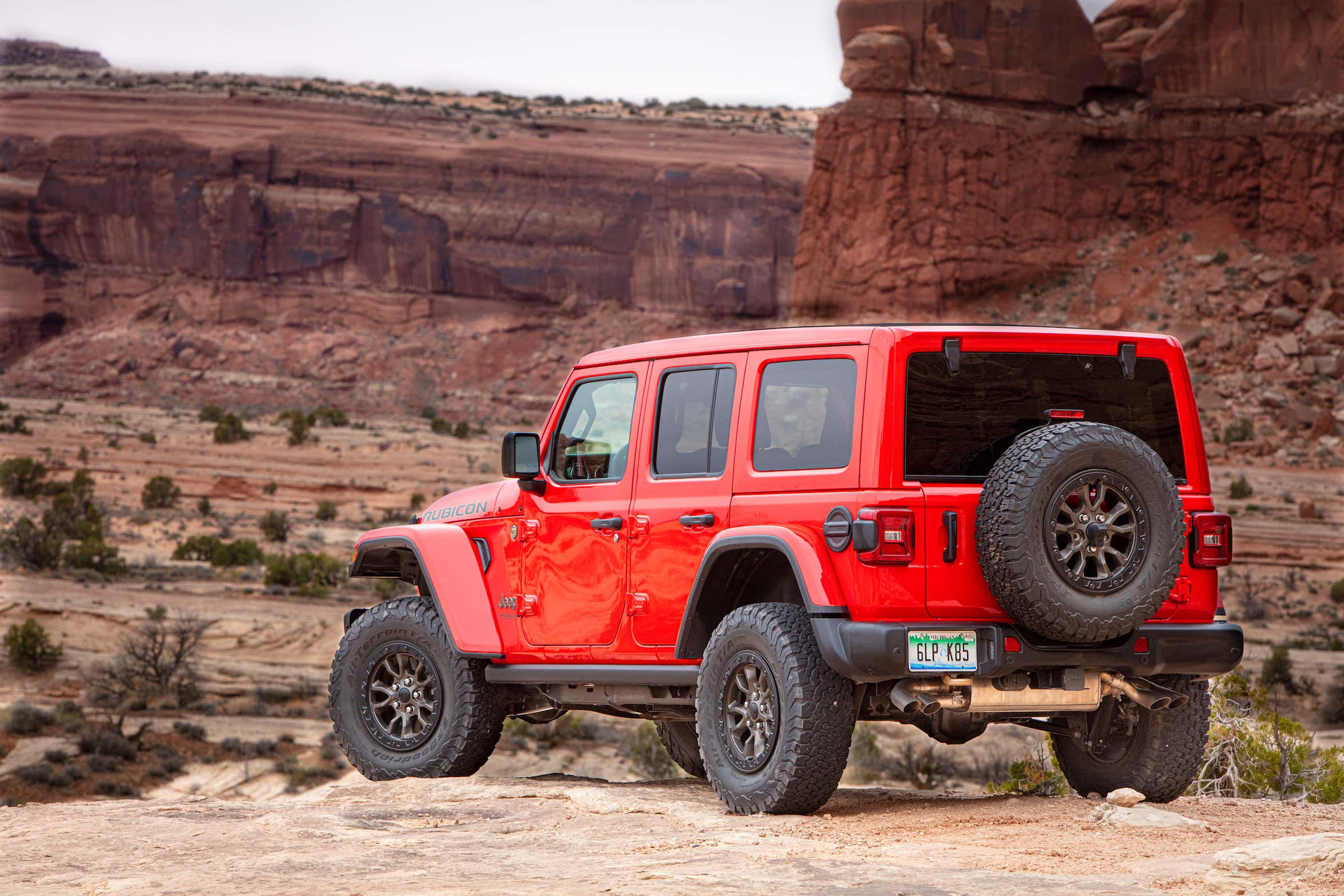 But one of the best features activates with a push of the button that wears a little picture of tailpipes. That is the Active Dual-Mode Exhaust button. There are two settings: normal mode, for when you don’t want to annoy your neighbors, and adrenaline mode for those times that you want to relive your muscle car days. One push and a vacuum-operated solenoid opens an internal gate in the muffler, effectively limiting any backpressure and releasing the sweet, unadulterated throaty notes of the Hemi V8.

Put it all together on the road, where it’ll spend most of its time anyway? The Wrangler 392 is shockingly enjoyable to drive around town even when you’re not stomping on the gas. It’s comfortable, with a solid and composed ride, and the extra power (and its surefooted delivery) gives it a surprising maneuverability. The transmission acquits itself just fine in auto mode and snaps sharply to attention when you really get on it and grab the paddles—Stellantis (née FCA) really knows its way around the ZF eight-speed.

It’s tough to parse out any immediate weaknesses, but I do have one complaint. Okay, maybe a suggestion. Jeep should add a fun gauge to the instrument cluster with a personally programmable red line so you don’t overtax your adrenal gland. Otherwise, the temptation to hoon is just too great. 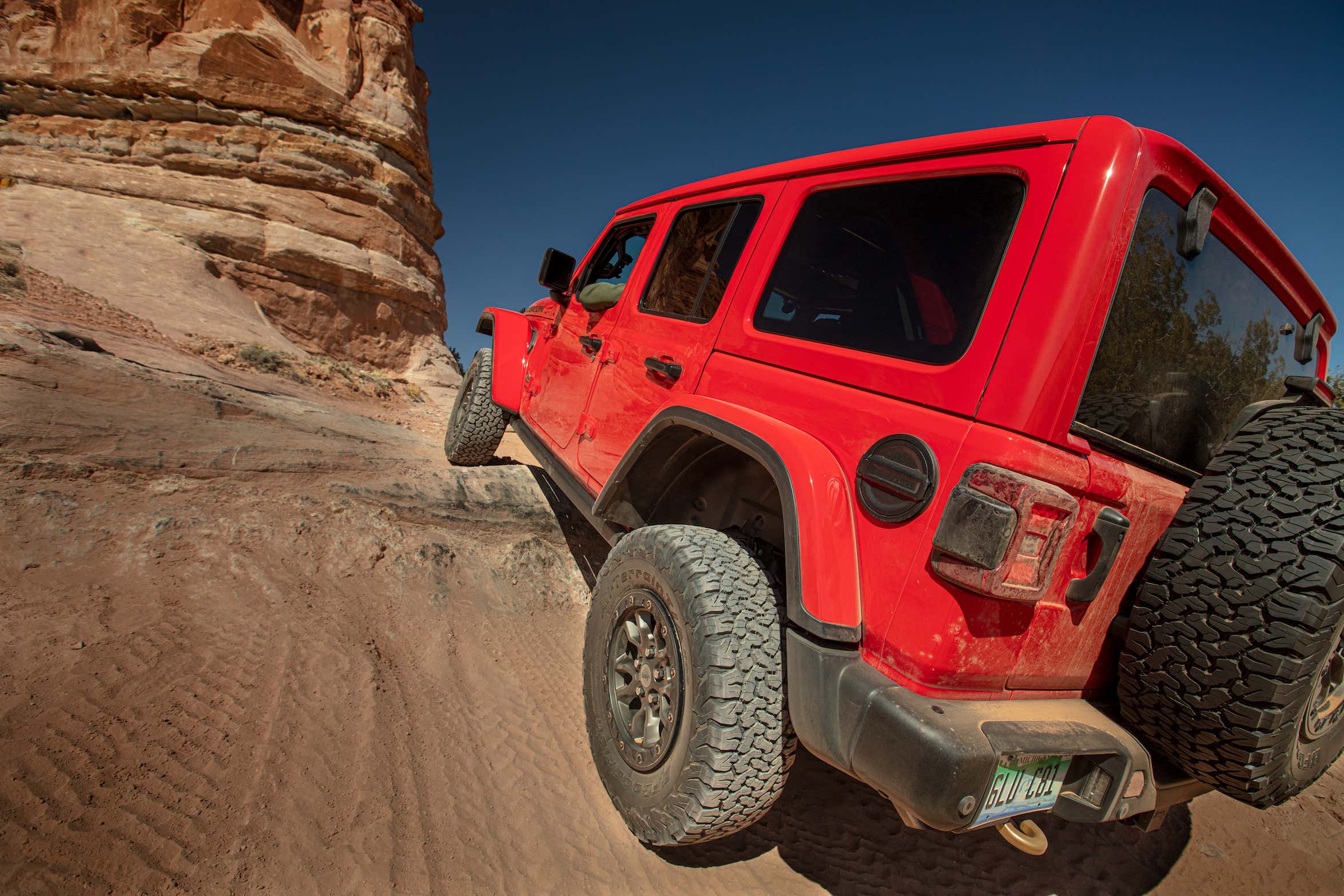 When the dust settled, it was clear that Jeep listened to horsepower junkies across the land. When the trail capability of a Rubicon is combined with a high-output, 6.4-liter, 470-HP V8 and downright impressive handling, there’s much to love. I think it’s also accurate to say we will never see another V8, body-on-frame, solid-axle SUV from a major manufacturer—add in the removable roof and doors, and this becomes a singular machine, one whose excesses might seem ridiculous to critics but whose sheer existence in 2021 demands a certain baseline appreciation. And then it’s actually good? I’ll take two.

The people asked, and Jeep delivered. The Wrangler Rubicon 392 is fan service of the highest order, and if you don’t get it—frankly, it doesn’t matter.