Lucid’s new sedan, the Air, has all of the numbers. Its drivetrain is 17% more efficient than its rivals. It has over 1,000 horsepower with the potential for much more. And its massive range of 517 miles is the longest of any electric vehicle by far.

The price is also impressive—impressive as in steep. It’s a “post-luxury” vehicle. The first models are all in the highest Dream trim level and will cost $169,000. To be fair, the company says the price for the base model will dip below $80,000, and reservations are open for the upcoming cheaper $139,000 and $95,000 trims. It also says the Air’s technology is scalable to even lower price ranges. The company did not, however, mention any future model to compete with something game-changing like the Tesla Model 3.

But starting with the negative is a bit unfair, because this car is more than just its numbers. Sure, the incredible amount of horsepower allows it to beat any competitor down the quarter-mile with an ET of just 9.9 seconds, however, the EV drag race is a bit played out at this point, isn’t it? What’s impressive about this car is that it appears to have an excellent interior with well-finished tech, and most importantly, it’s not the vaporware we see so often from other smaller manufacturers. This car is real. 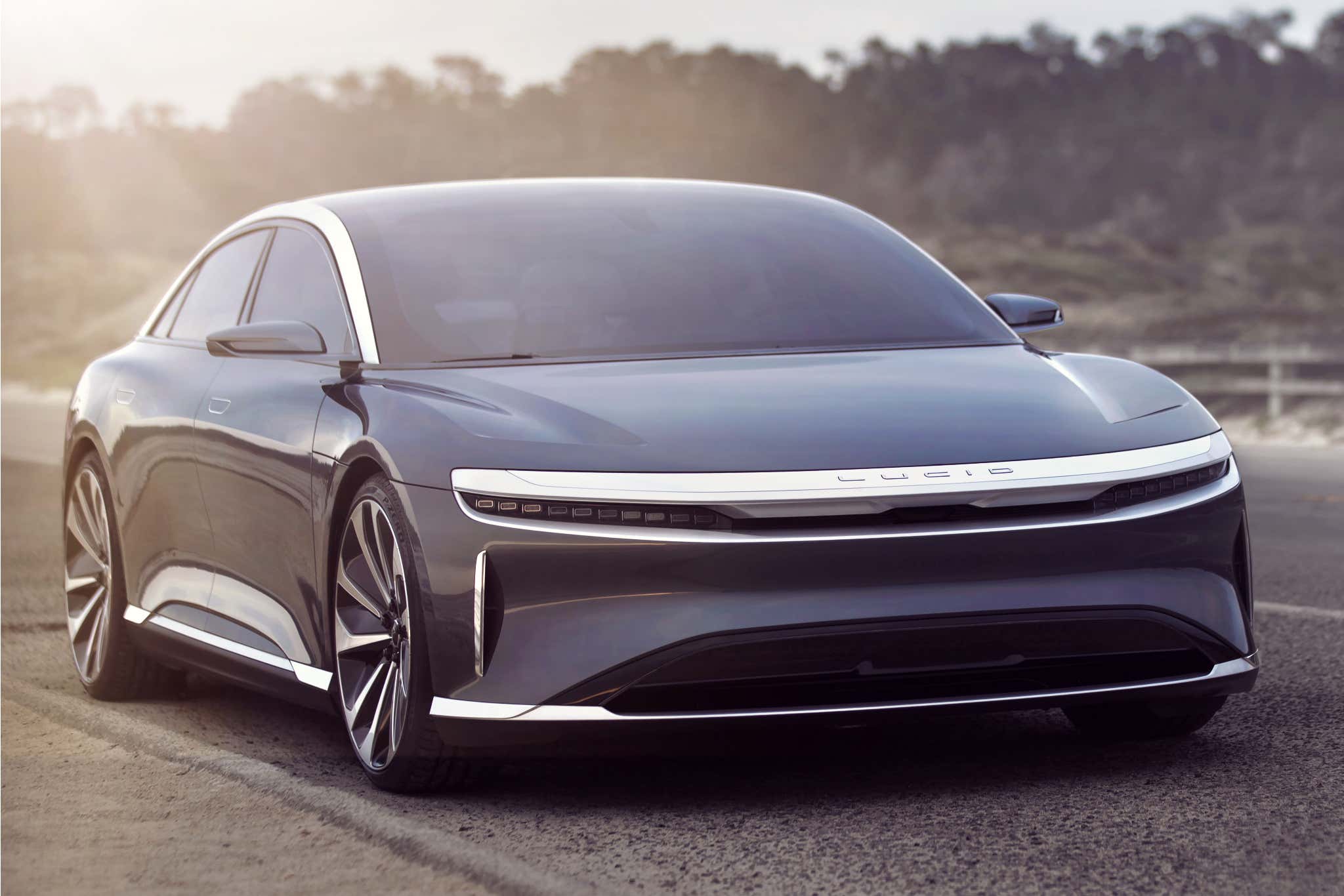 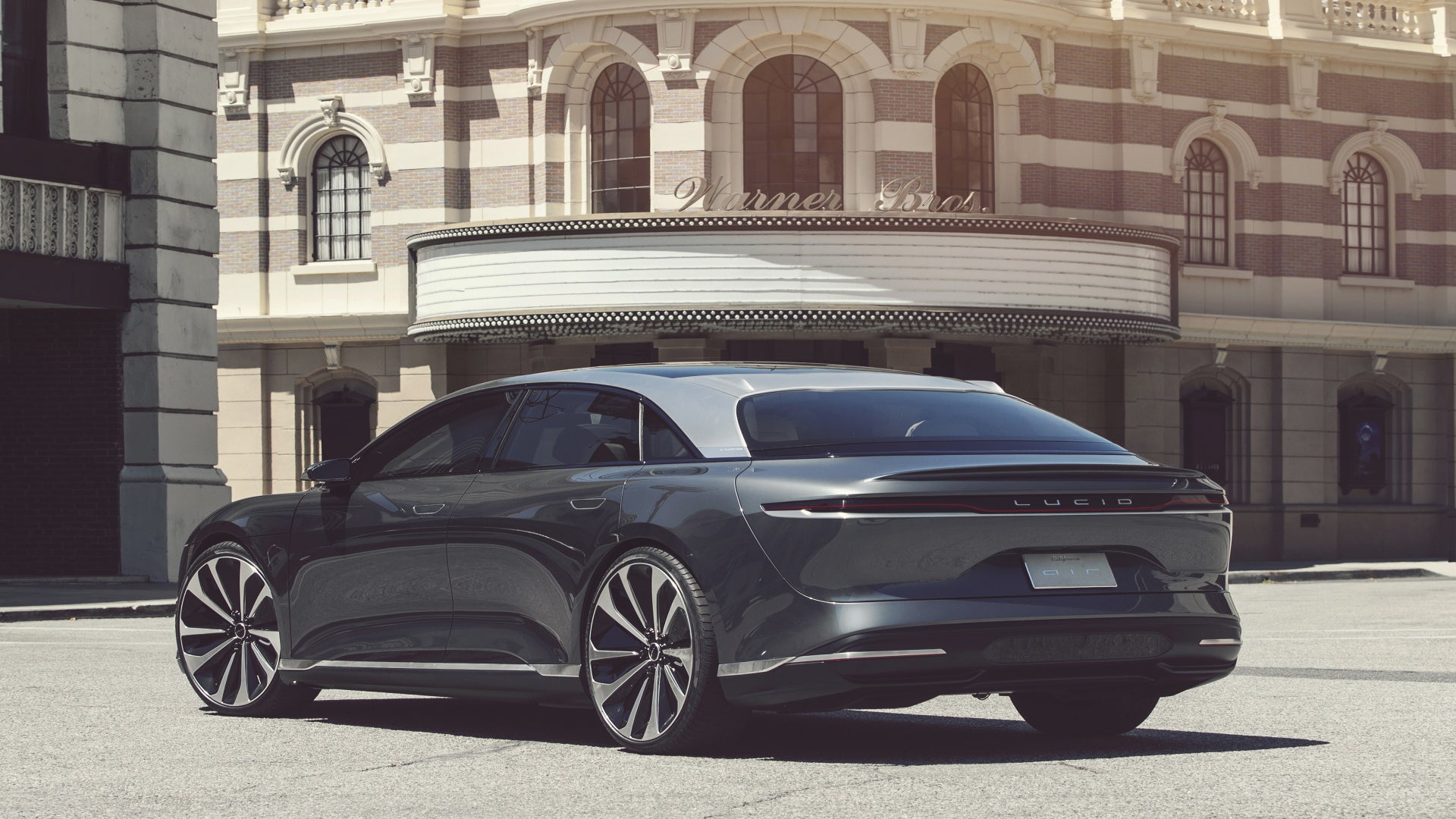 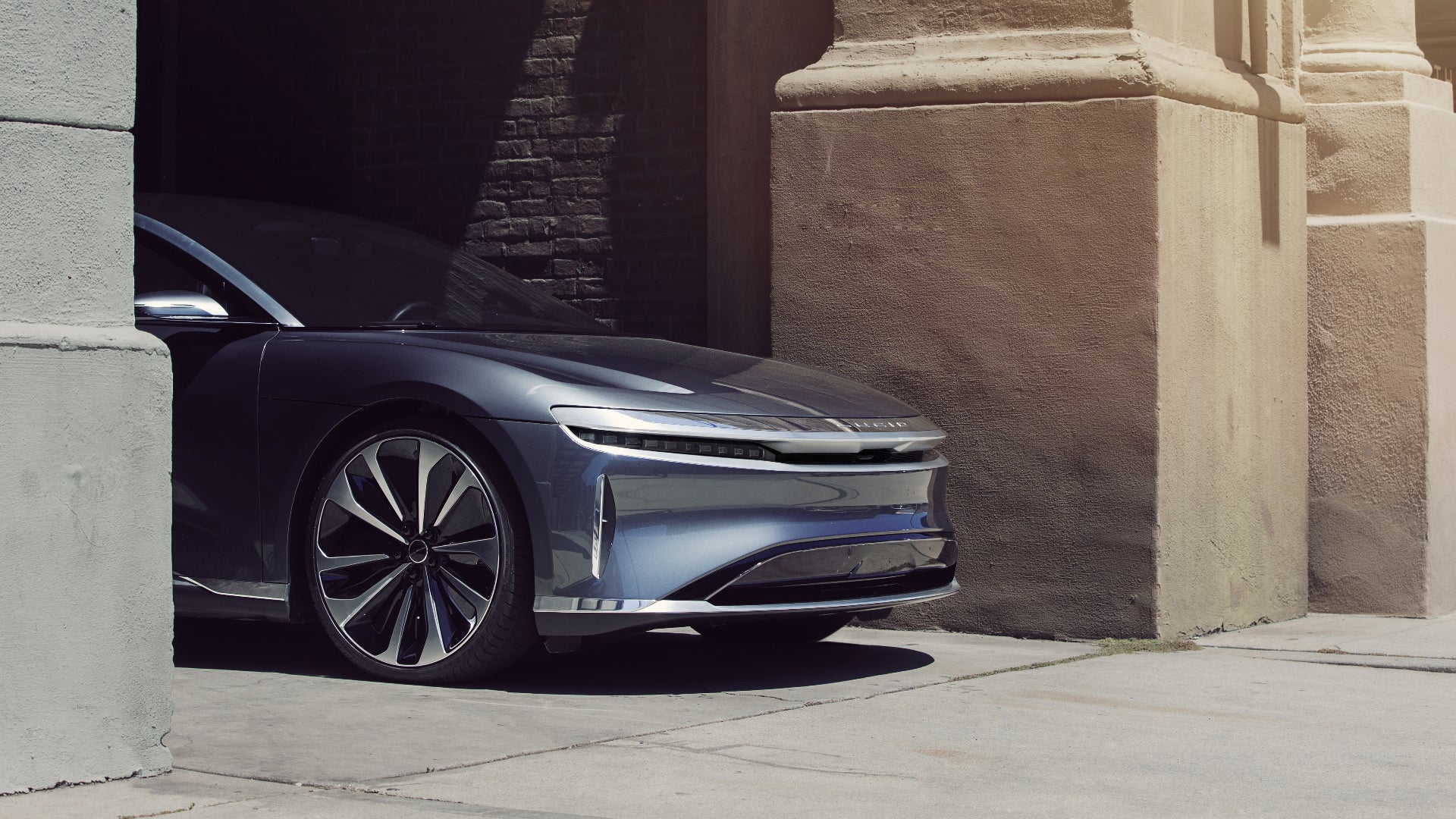 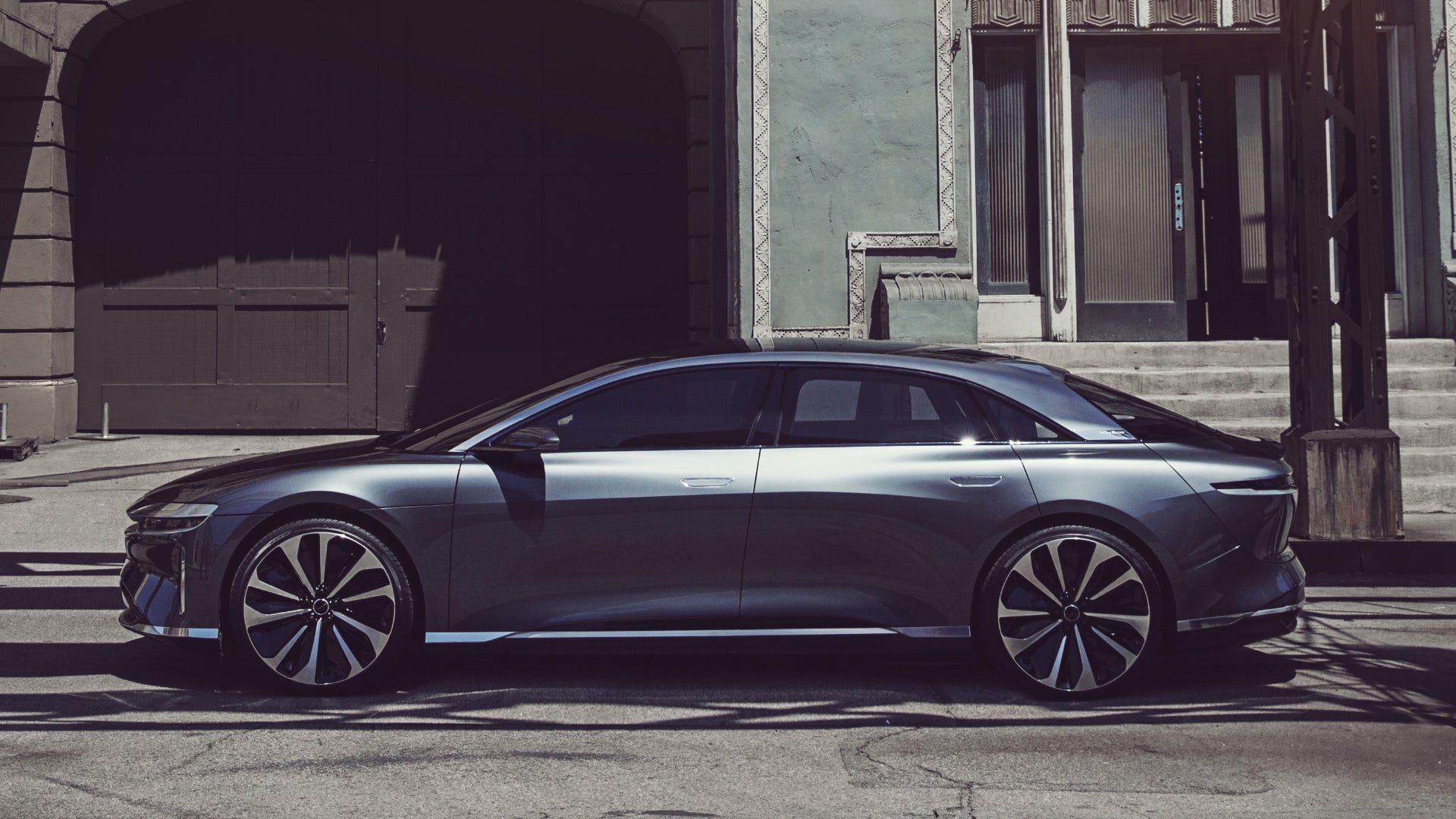 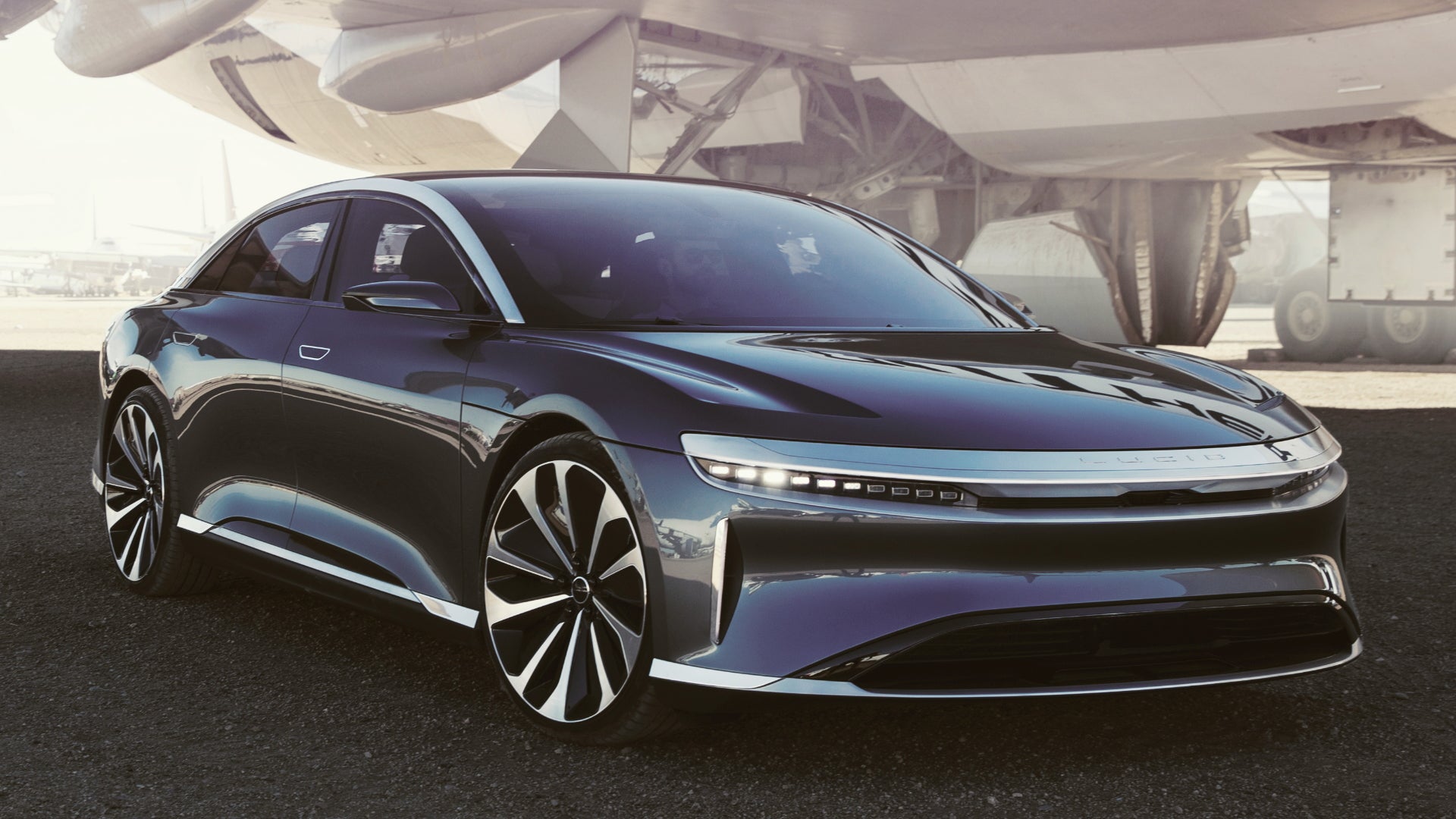 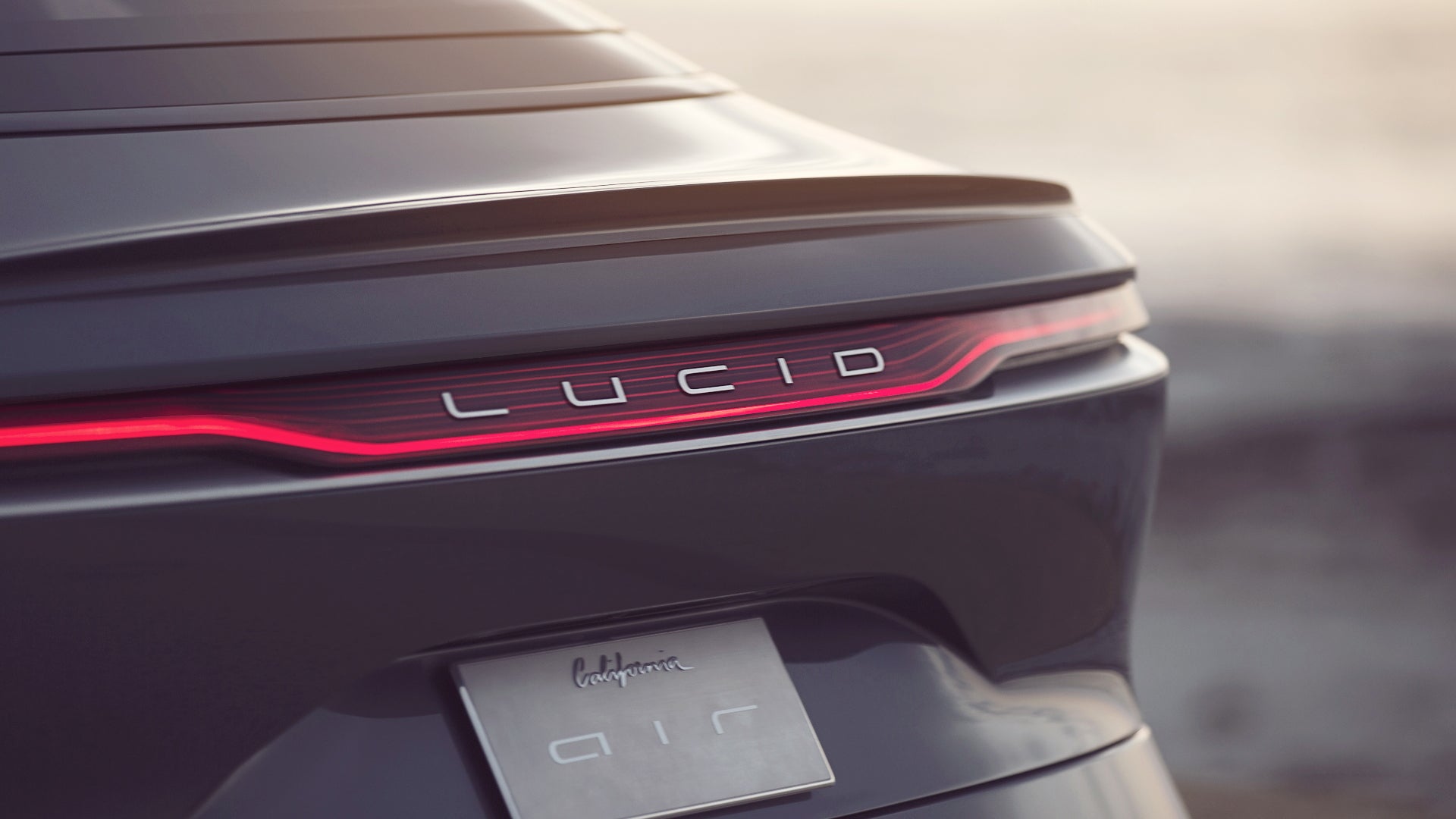 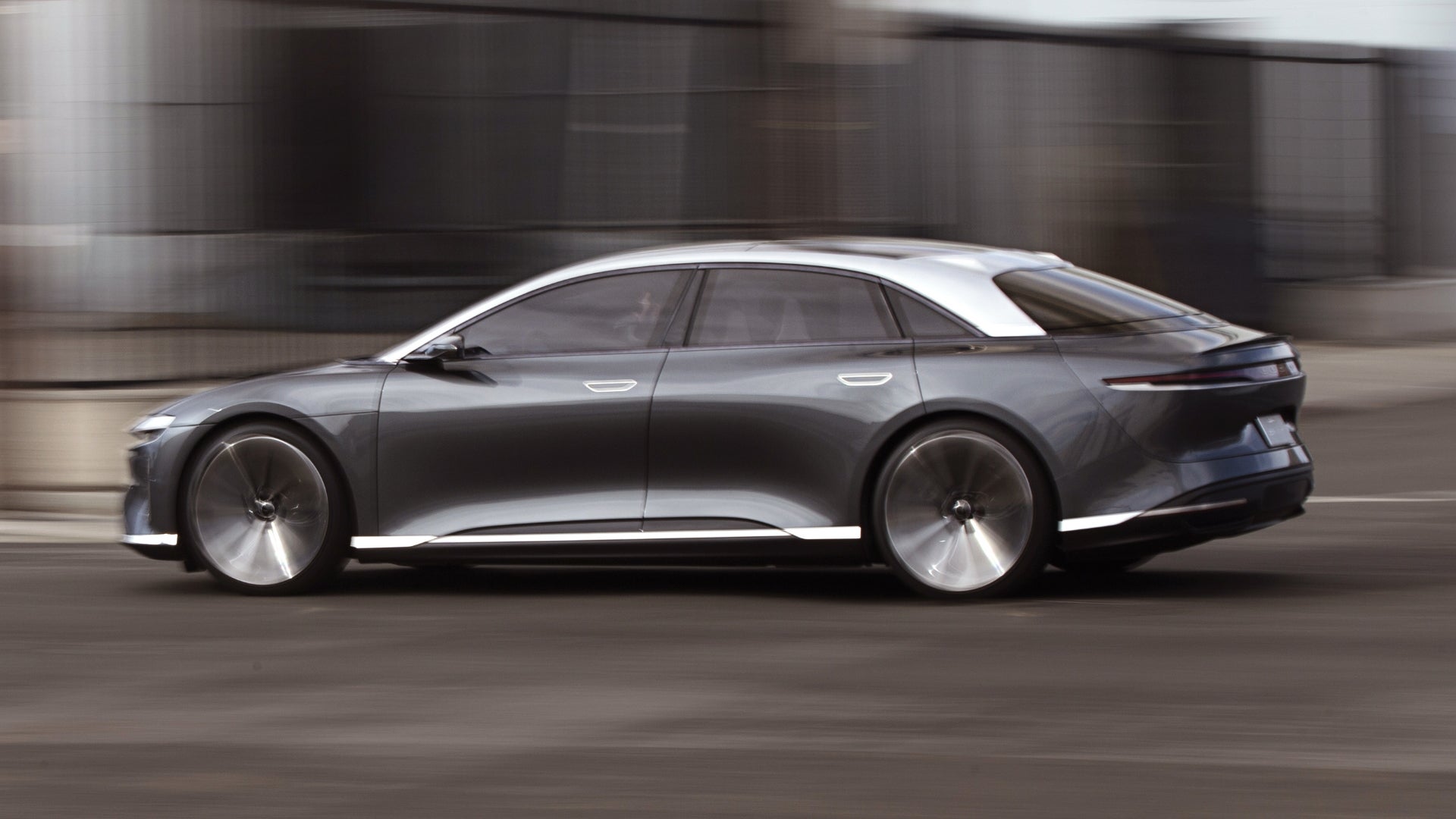 We know it’s real because of the brand new manufacturing facilities they’ve put up to build it as well as the showrooms they’ve leased—primarily around California—to try and sell it. These showrooms promise a different experience for buying a car, with mid-century furniture, no-pressure salespeople, and while this wasn’t specifically mentioned, I’m certain scones will be flowing out the door.

Lucid also promises a different experience inside the Air. The company’s Manager of Color, Materials and Finishing, Sue Magnusson, went into ample detail concerning her and lead designer Derek Jenkins’ vision for the vehicle’s cabin. Each palette is named for a different location in California, with examples including Santa Monica, Mojave and Tahoe.

The interface is also not just touchscreen-based cost-cutting masquerading as the next big thing. It’s a careful combination of premium-looking and admittedly unique analog controls that they claim will help round out the user experience. Take a look at those free-floating knobs on the steering wheel, for instance. 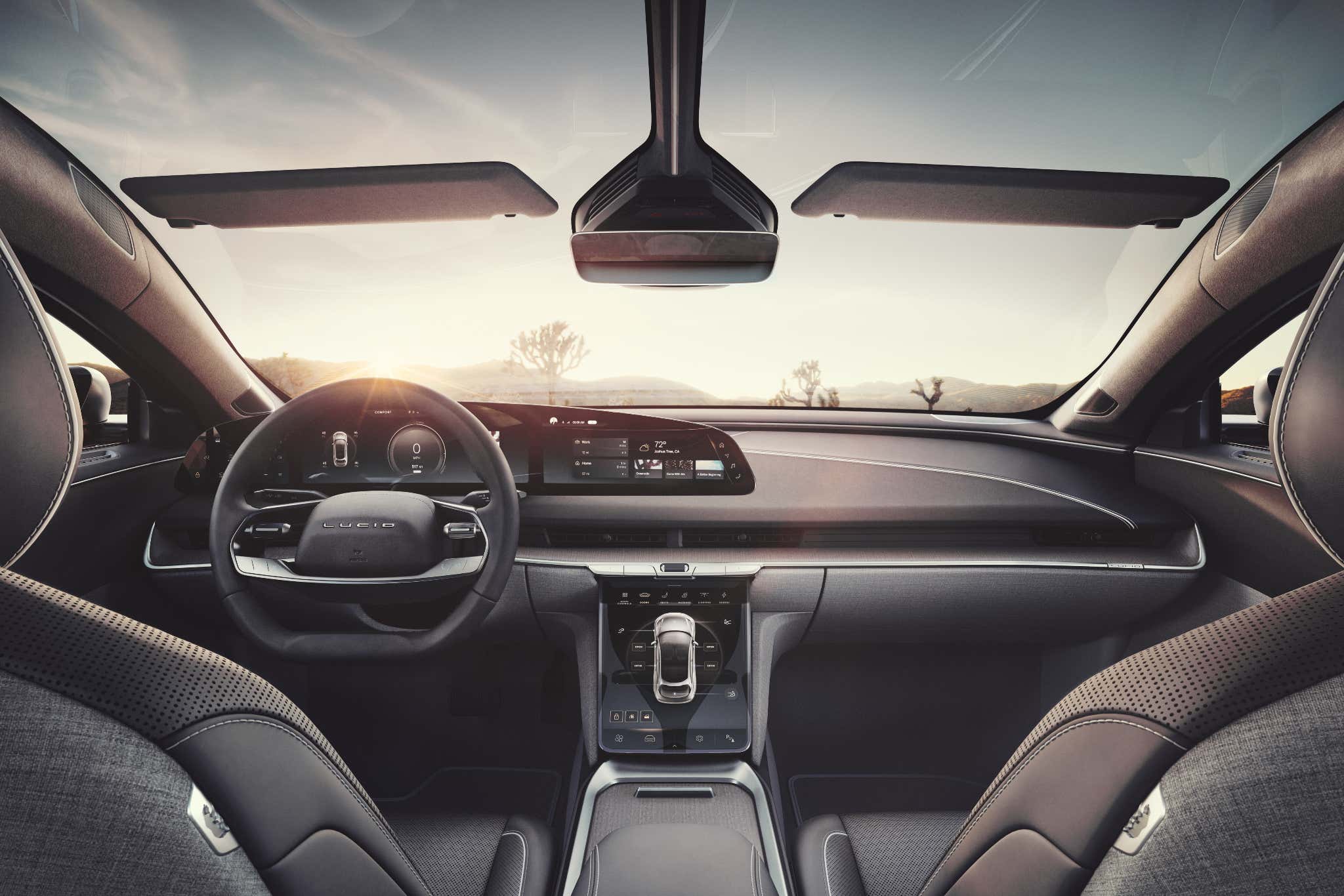 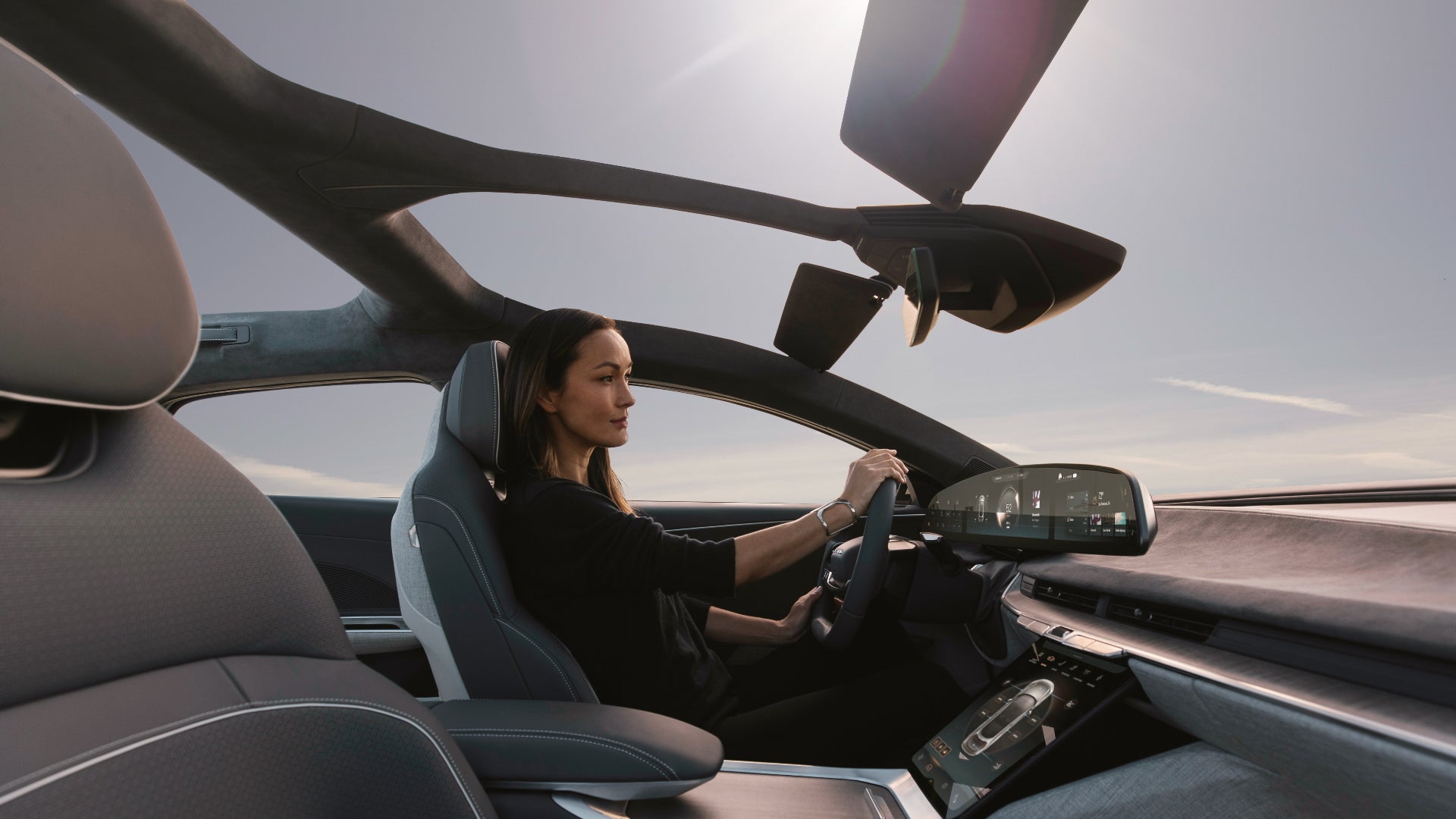 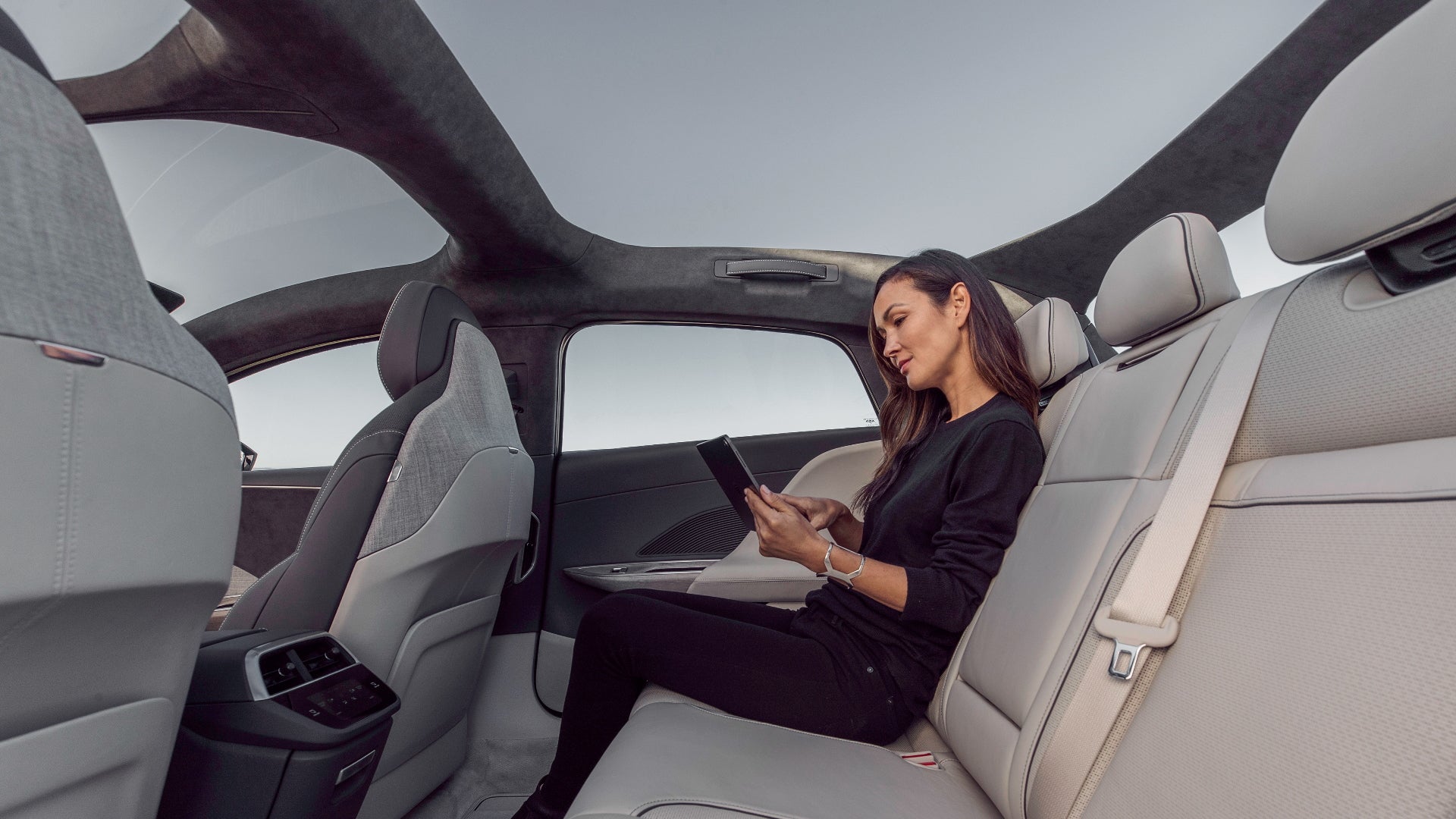 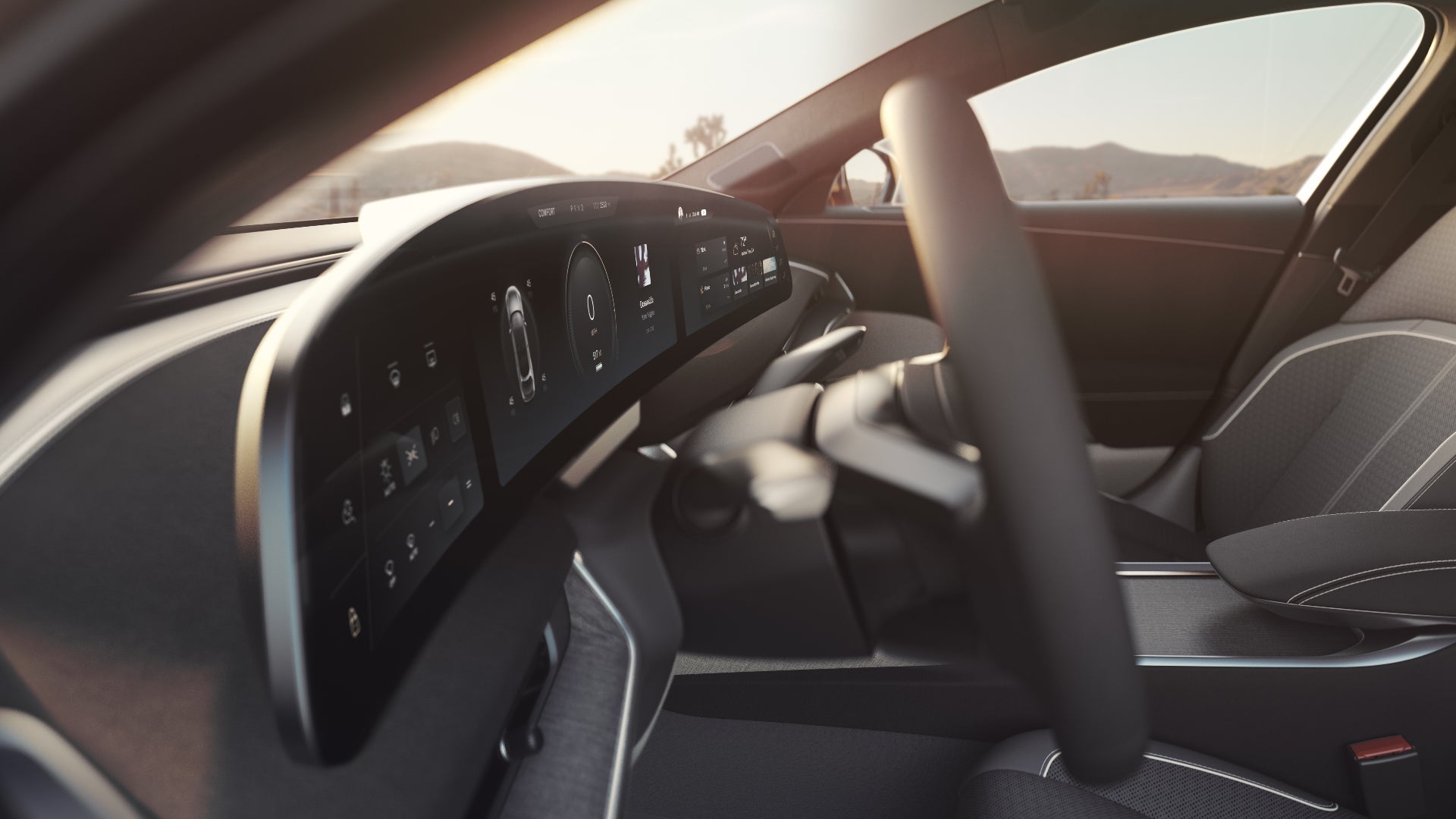 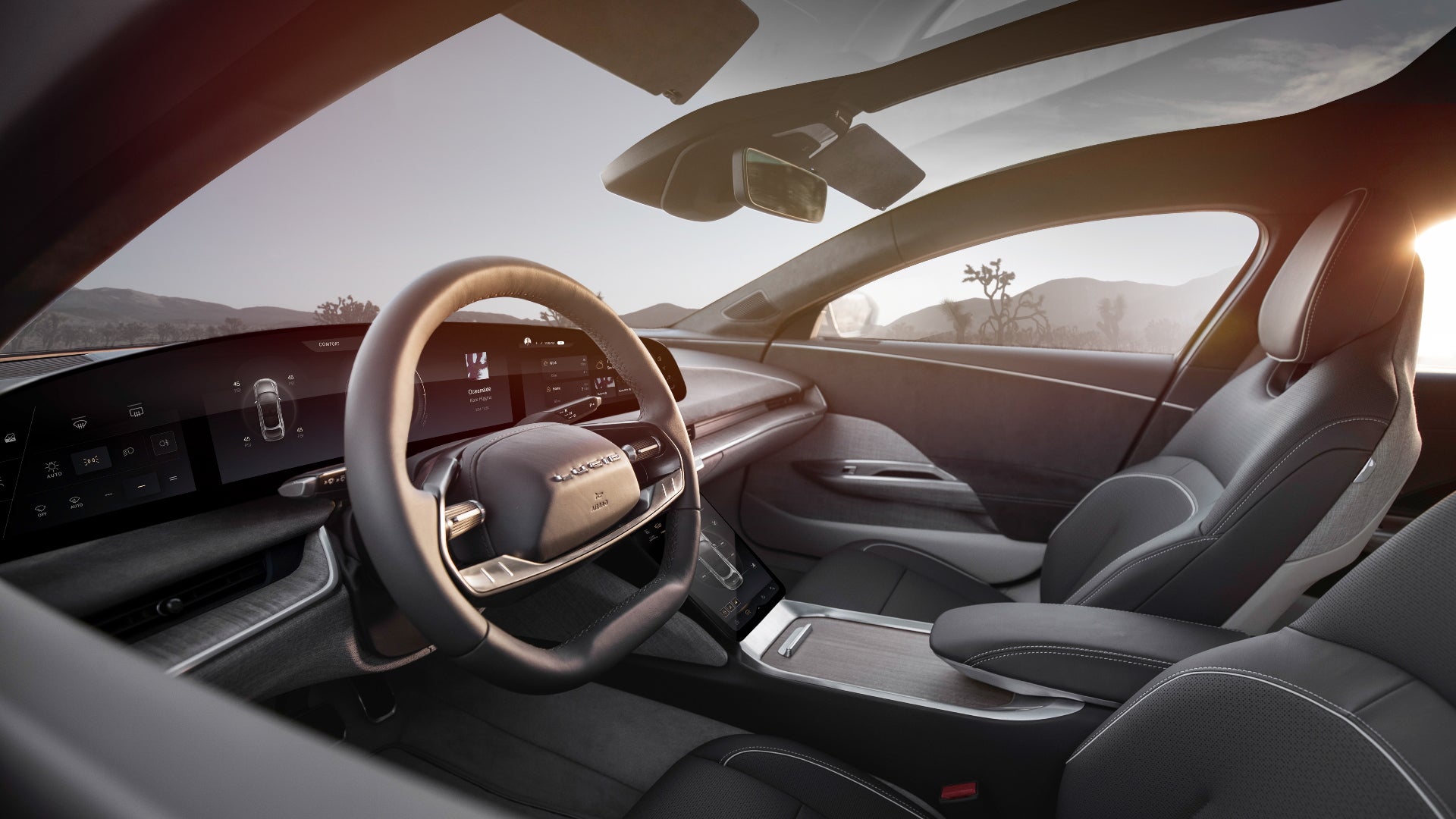 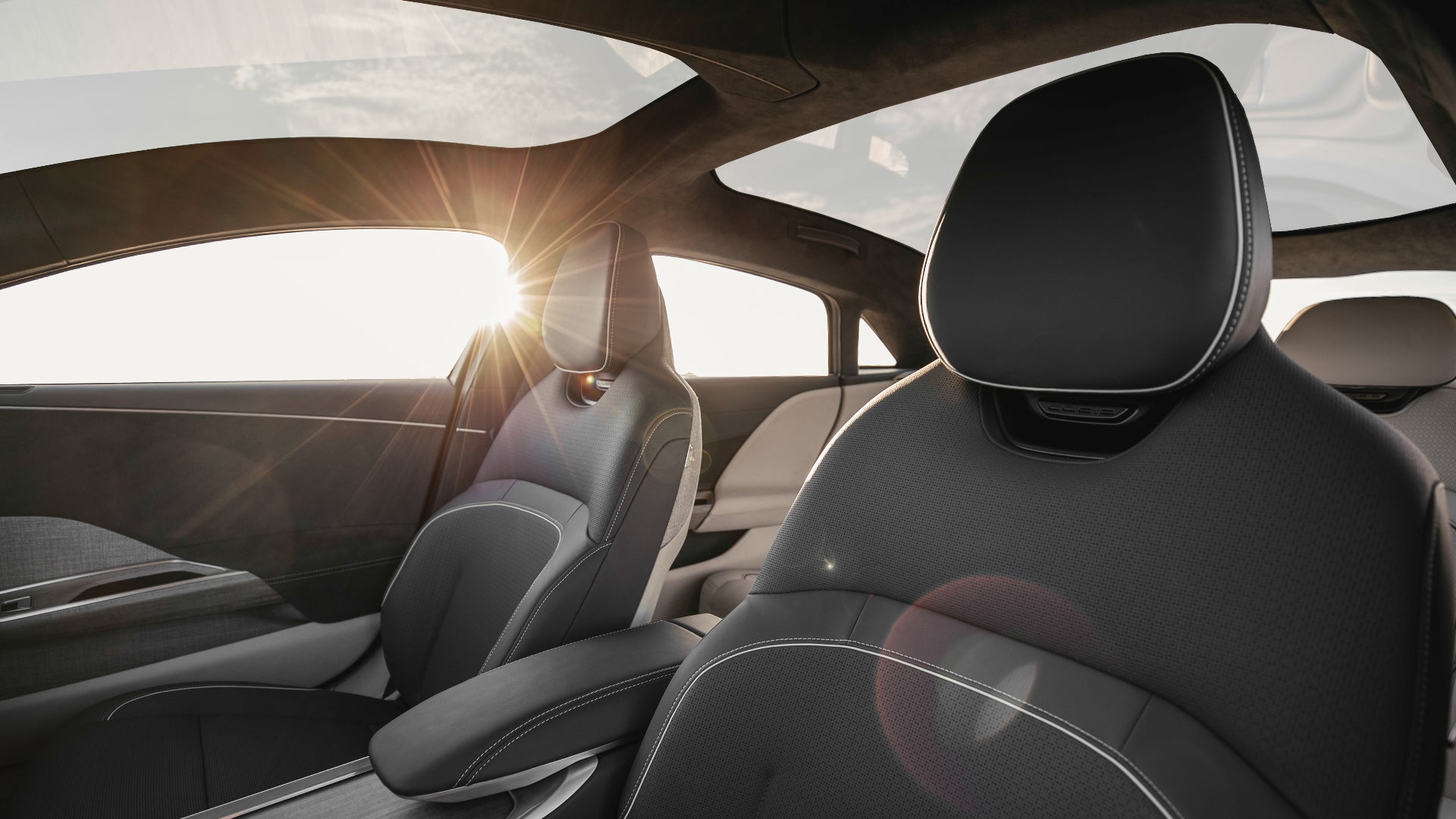 You’ll also notice some other interesting features of the car from looking at the interior shots, such as the massive, free-floating display sitting in front of the driver. It’s a 5K-resolution touchscreen, and at 34 inches, it’s nearly three feet wide. It’s complemented by another touchscreen on the center stack, which tucks back into the car’s dash when its not in use.

Also on display is the car’s massive panoramic windshield. It extends well behind the driver’s head, and the rear-view mirror sits on a sort of peninsula extending from the central beam connecting the two window arches of the car. The sun visors—not sure how much good they’ll do at this point—are also free-floating on the glass windshield. All of this leads me to believe the car will get rather hot, but rest assured, it has an AC compressor, and the temperature of the interior can be regulated from your phone.

Speaking of the car’s mechanical systems, the battery and motors are really where Lucid has figured it all out. As previously mentioned, the company’s drivetrain was developed in-house and is nearly one-fifth more efficient than its closest rival. This ensures that the vehicle’s incredible 517-mile range can be extracted from its 113-kilowatt-hour battery pack with relative ease. It’s not only the range and efficiency that’s impressive, either. The car’s motors are positively microscopic compared to a company like Tesla’s, and at a total output with 3 motors reaching up around 1,800 horsepower, they pack one hell of a punch for their size.

Their diminutive size lets this mid-sized Lucid have the interior space of a full-sized BMW 7 Series. The rear passengers enjoy a flat floor, there are plans for rear seats that recline to luxurious angles, and speaking of comfort, the hardware for level 3 autonomy is already in place. The car will come standard with high-resolution LIDAR, which is something we haven’t seen on an EV yet. And no, Lucid isn’t overextending itself and selling self-driving systems that don’t actually exist yet. They’re going to use over-the-air updates to let those features waft into the car when they’re ready.

As far as charging goes, the first customers have that covered. The impressive range is complemented by three years of free charging at Electrify America stations. The car is also the fastest-charging EV yet to be unveiled, able to gain 300-miles of range in just 20 minutes. If you think that high-speed, 900-volt charging might make the electronics go awry, the company’s battery packs have a 100% reliability in the crucible of EV motorsport, Formula E.

Add this all together with integrated tech like Amazon’s Alexa and industry-leading storage volume thanks to those tiny motors, and you have a recipe for an excellent (albeit expensive) car. Competing with the likes of the Porsche Taycan and Tesla Model S, it might just come out on top. When it comes to rivals like the S-class, with its upcoming EV companion the EQS, well, I’m just not quite sure. The true test will come when these cars hit the streets, and hit the pages of publications like The Drive.