Long-troubled Lotus has always had the engineering chops—if not quite the capital or brand recognition—to go toe-to-toe with Porsche. Now backed by China’s well-financed Geely, Lotus may at last have what it needs to take the fight to Stuttgart, which it will do with its first new mortally attainable road car since the third-gen Exige. It’s called the 2022 Lotus Emira, and it might just succeed where the Alfa Romeo 4C and Alpine A110 failed.

Borrowing its name for an Arabic term for a person of high stature—mostly referring to a prince or princess—Lotus’s latest lightweight mid-engined sports car utilizes the new Lotus Sports Car Architecture, an evolution of the bonded, extruded aluminum chassis design proven by the exceptional Elise. Compared to its competitor the Porsche Cayman S (982), the Emira comes in 1.3 inches longer, 3.7 wider, and 2.8 lower, making it a far more exotic sight than 911’s lieutenant. 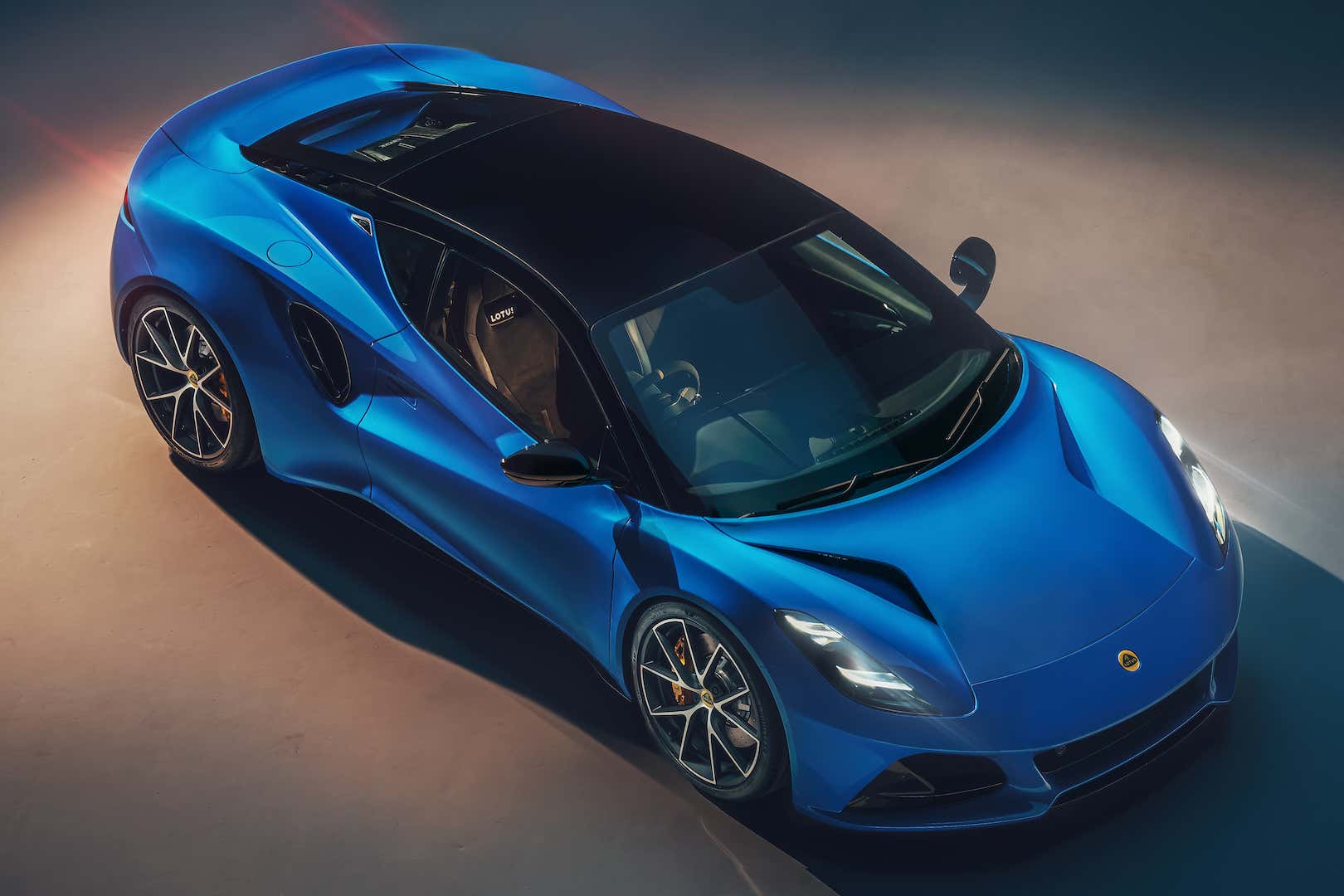 Like the Cayman, the Emira derives power from a mix of four- and six-cylinder engines, the base option being a potent AMG 2.0-liter turbo paired with a dual-clutch transmission. (Transmission specs haven’t been confirmed yet.) First Edition cars (and maybe more) will inherit the Evora’s 3.5-liter, supercharged V6, which will be available with a manual transmission whose linkage is partially exposed. 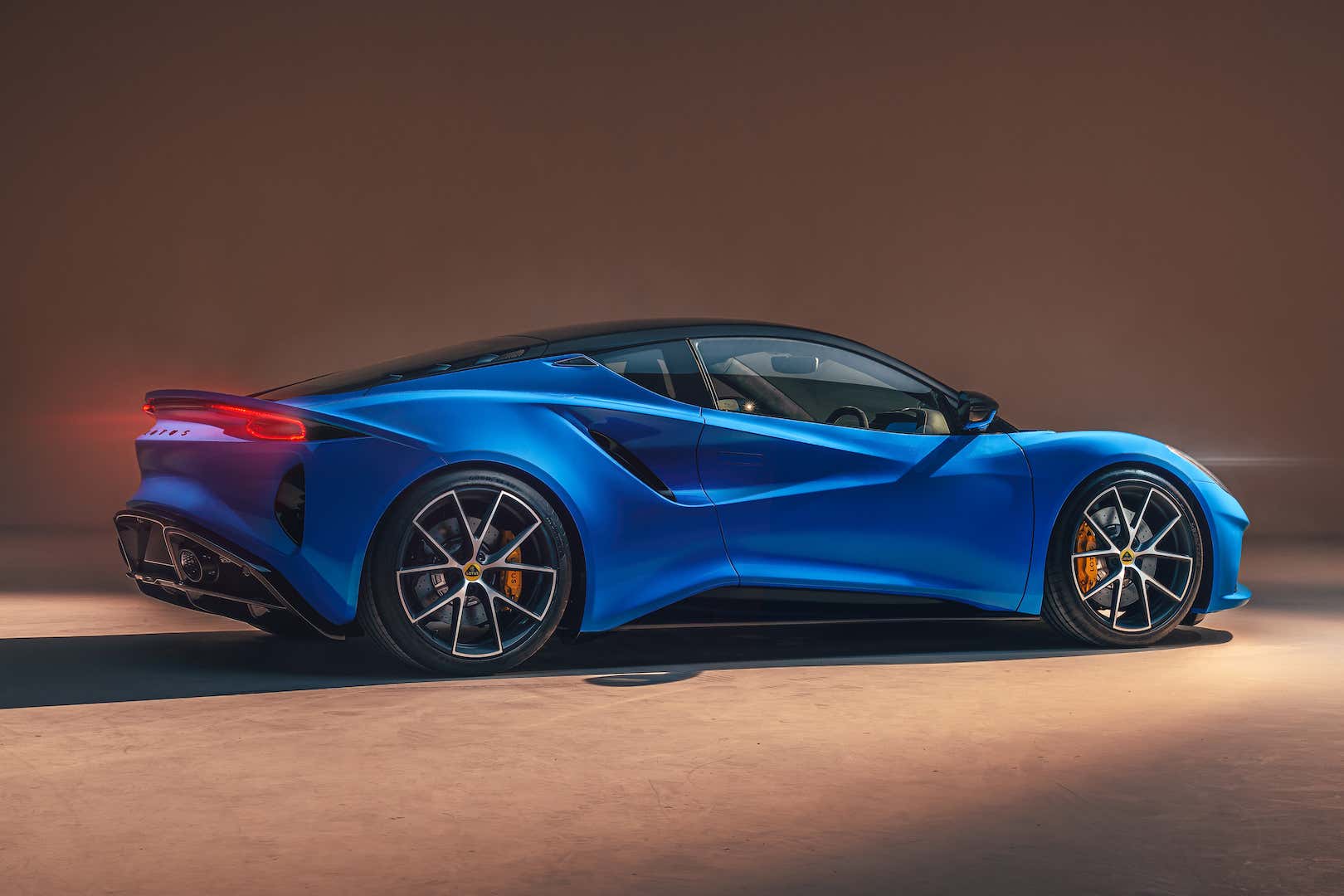 With horsepower spanning the 360 to 400 range, the Emira can catapult itself from zero to 60 mph in under 4.5 seconds, and to a top speed of 180 mph. Long before then, the driver will feel the effects of its functional aero, which presses into the tarmac its standard Goodyear Eagle F1 Supersport tires—or, with the optional Lotus Drivers Pack, Michelin Pilot Sport Cup 2s. This package also stiffens the suspension some, and adds a Sport driving mode that sharpens feedback through the Emira’s old-school hydraulic power steering. 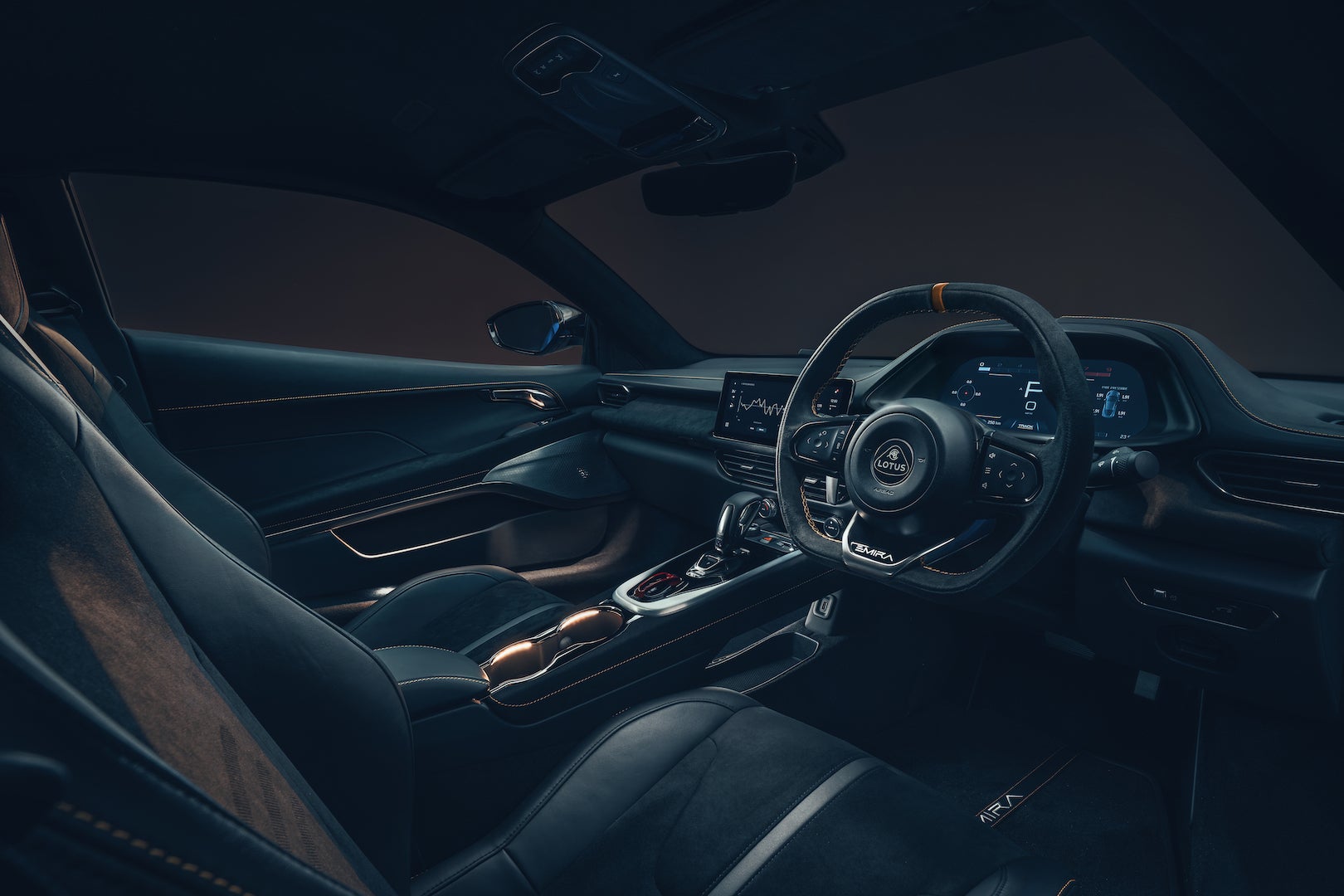 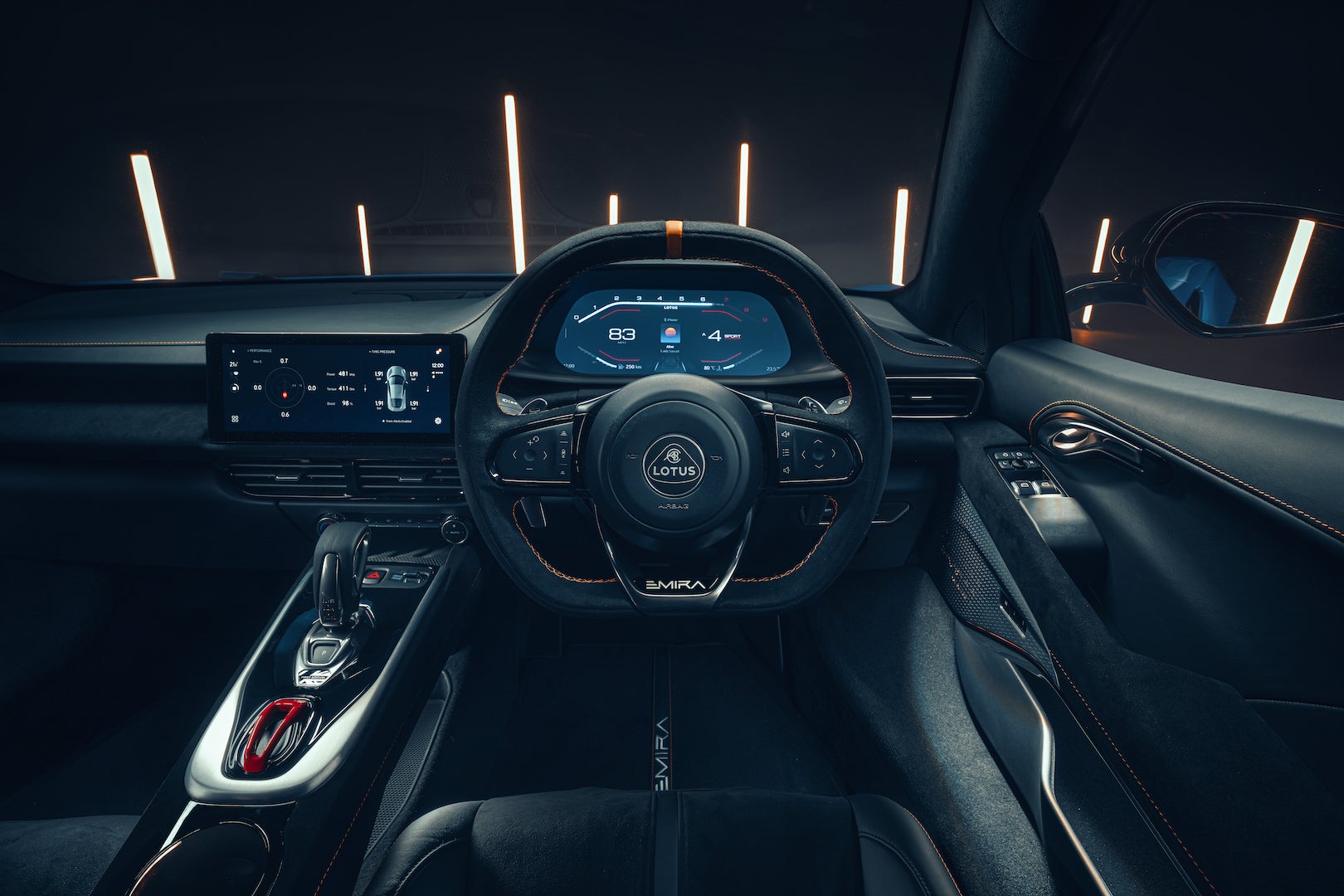 Despite being a Lotus, the Emira’s interior is neither an exercise in asceticism nor a two-plus-two affair like the Evora was. Behind the Emira’s twin seats are 7.3 cubic feet of cargo room, with a further 5.3 in the trunk out back, good for a bag of golf clubs. As for the seats themselves, they’re four-way electronically adjustable units, with the option to upgrade to 12-way. Neither are supposed to be a pain to get into or out of, as Lotus claims the easiest ingress and egress in its class, not to mention the best headroom. For a car nearly three inches lower than the Cayman, that’s quite the accomplishment.

Being a product of the 2020s, the Emira is inescapably loaded with the kind of technology some will consider a crime against Colin Chapman’s credo. A 12.3-inch gauge cluster screen is flanked by a 10.25-inch central infotainment system with standard Apple and Android software, and an optional 10-channel KEF premium sound system. There are two cupholders, a USB dongle and a phone slot, not to mention cruise control, keyless start, rain-sensitive wipers, folding and dimming mirrors, parking sensors, and even some ADAS. Despite all this added tech, the Emira somehow stays slim, with Lotus stating a targeted weight of under 3,100 pounds in its lightest form. 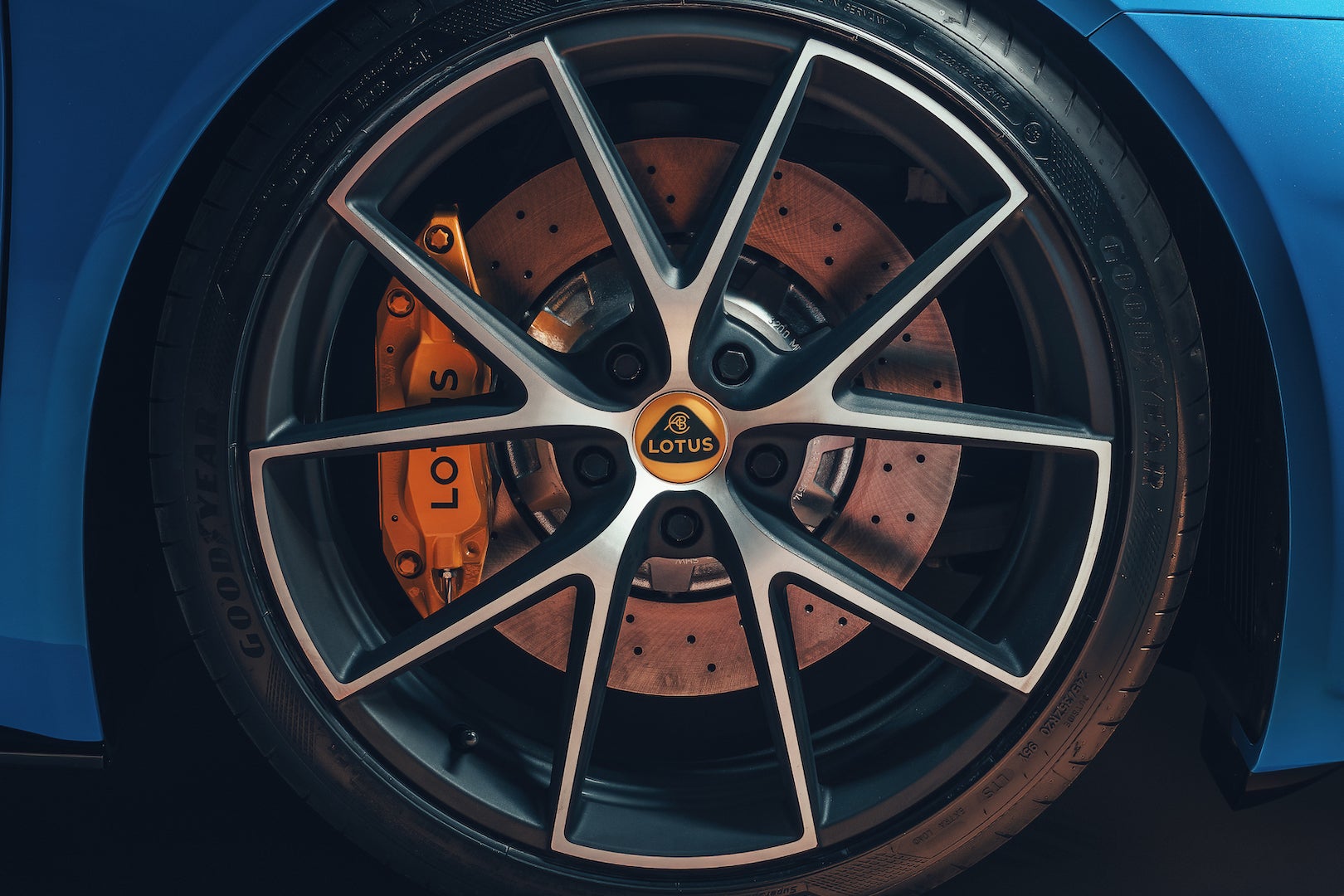 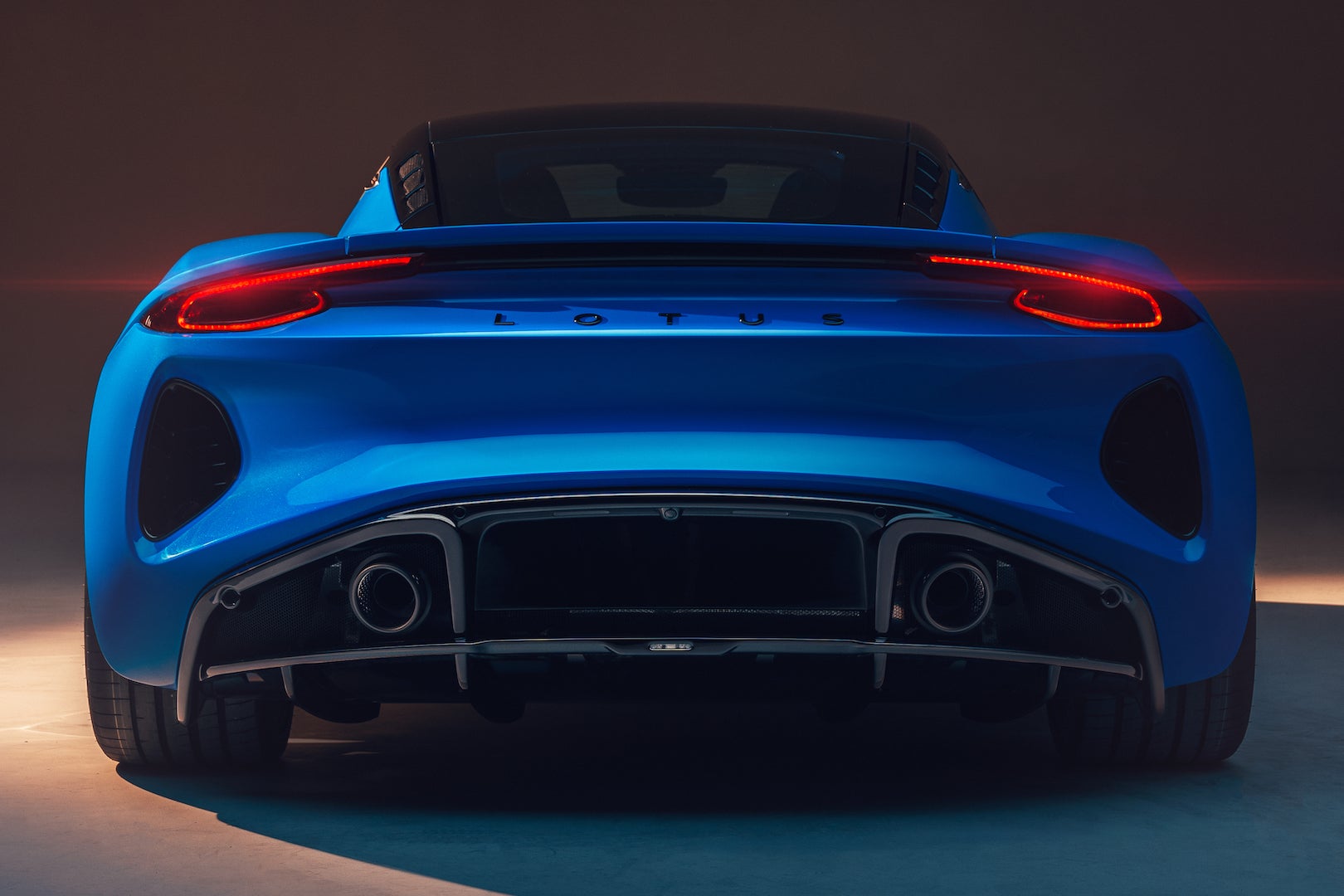 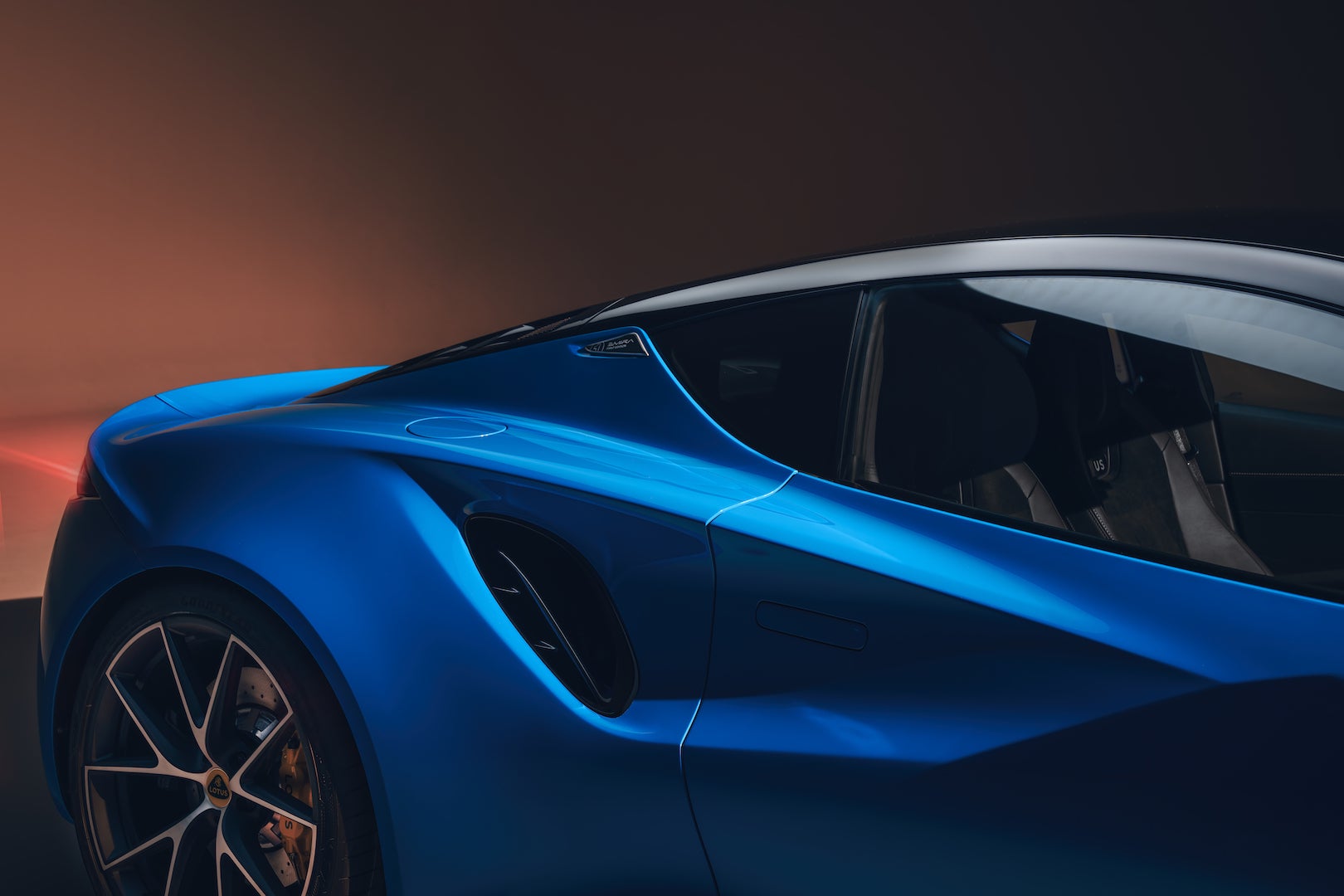 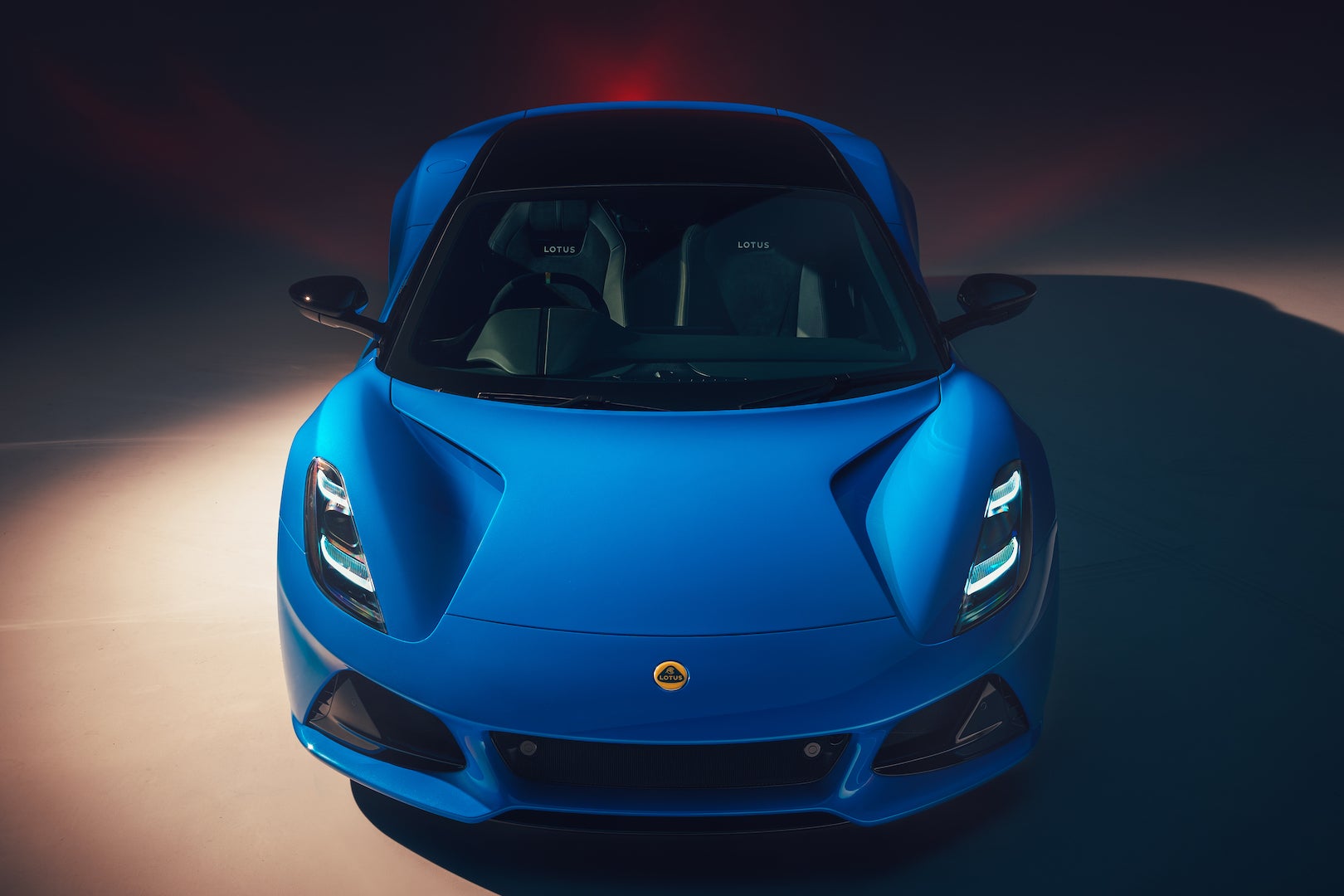 The 2022 Lotus Emira will strut its stuff this weekend at the Goodwood Festival of Speed in advance of deliveries in Spring 2022, with four-cylinder models following in the Summer. It comes in a hair heavier than a Cayman S, and starting below $82,750, it’s priced slightly higher, though it comes with more power and unquestionably looks the more moneyed machine.

And should it drive like the Evora, which remained one of the world’s best sports cars even a decade after its release, the Emira might become the budget supercar that Porsche will never let the Cayman be. 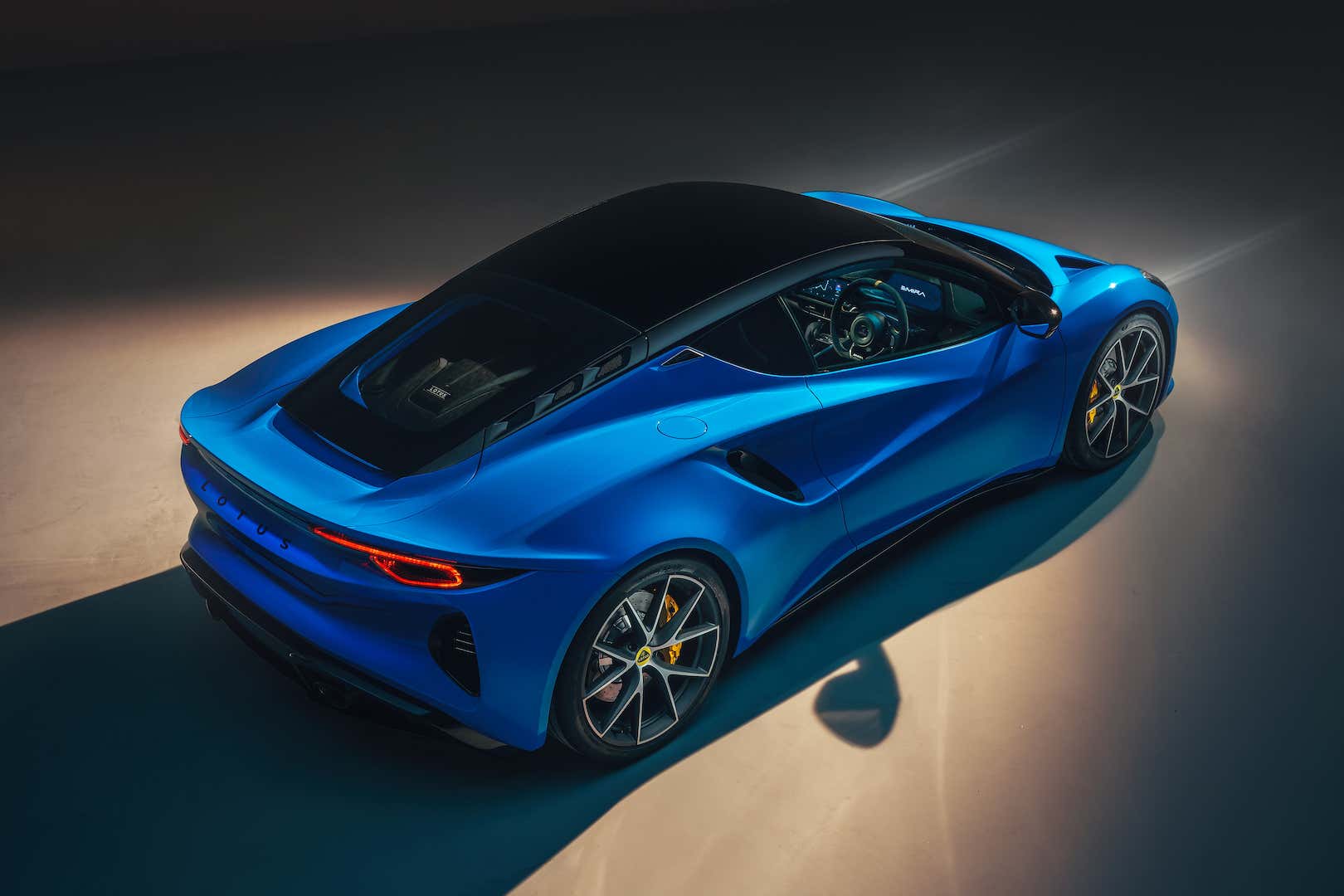