In perhaps one of the most hyped launches of the year, we have finally gotten a real look at the 2023 Acura Integra. The new hatchback is Acura’s attempt to build a “true performance five-door” and has been hotly anticipated since it was first teased earlier this year.

The new car will be the first Integra to ship with a turbo from the factory, sporting a 1.5-liter turbocharged VTEC engine. This will be paired with an optional 6-speed manual gearbox, which should appeal to enthusiasts. A limited-slip differential will also be available, adding to the model’s sporting credentials. 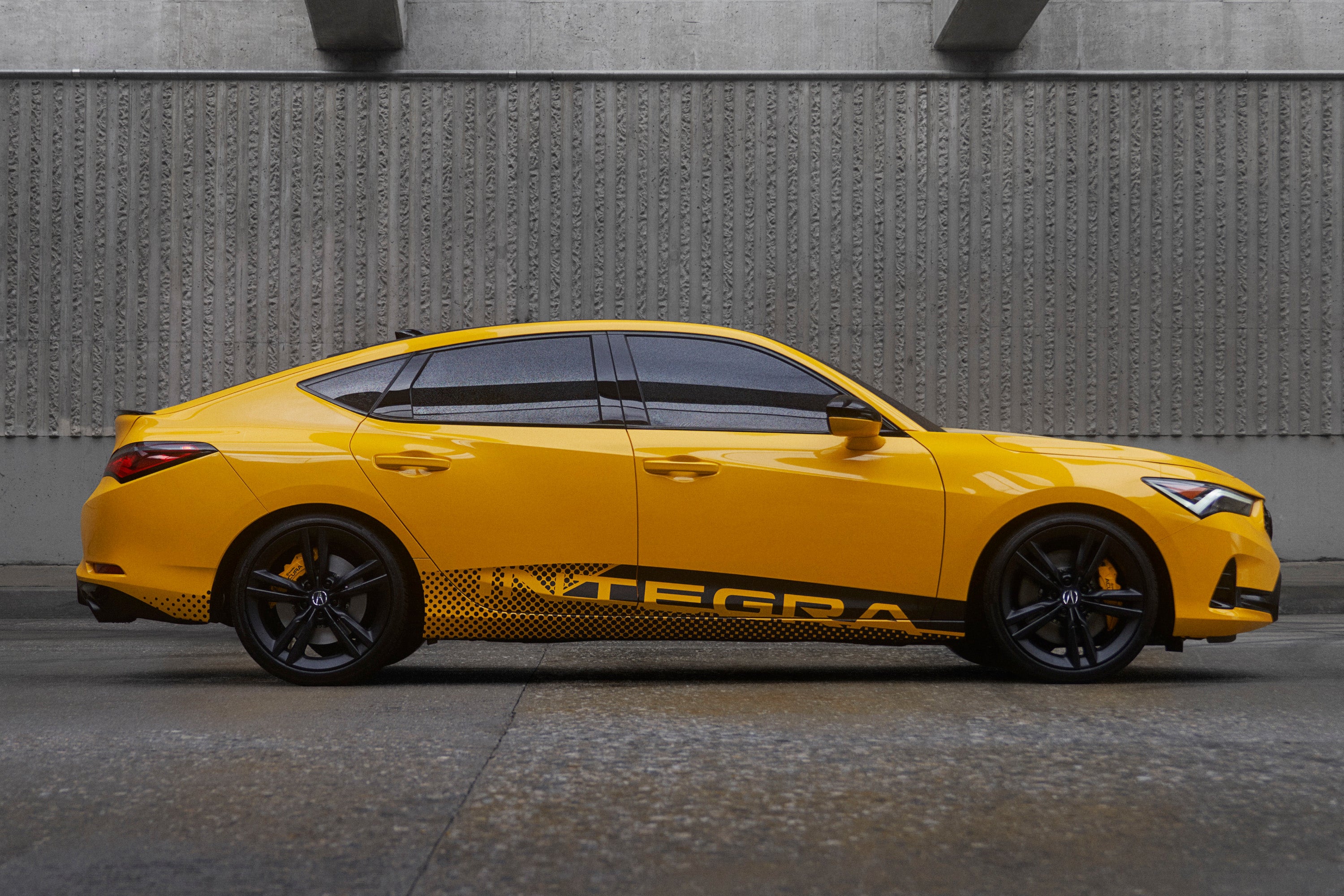 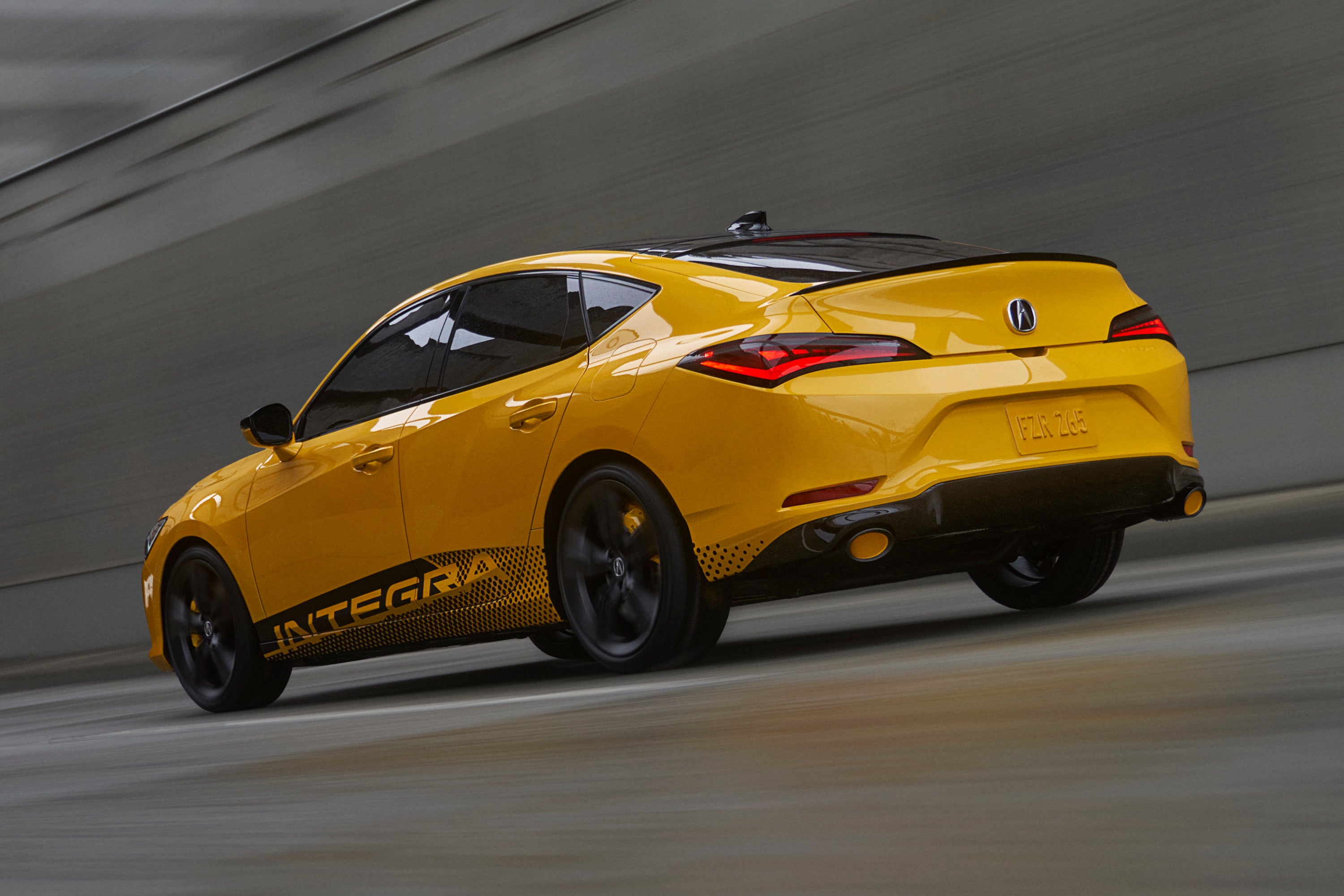 Revealed in today’s livestreamed event, the Integra Prototype, as it was named, was shown finished in the same Indy Yellow Pearl paint as seen on the current Acura NSX. This was in part to pay homage to the famous Phoenix Yellow that was so popular on the Acura Integra Type R of years past.

The event featured a demo video contrasting it against the classic Integras of years past, as you’d expect given the positive history of the model. The new Integra looked sharp with “INTEGRA” graphics down the side skirts and the embossed wordmark on the bumpers, both front and rear. 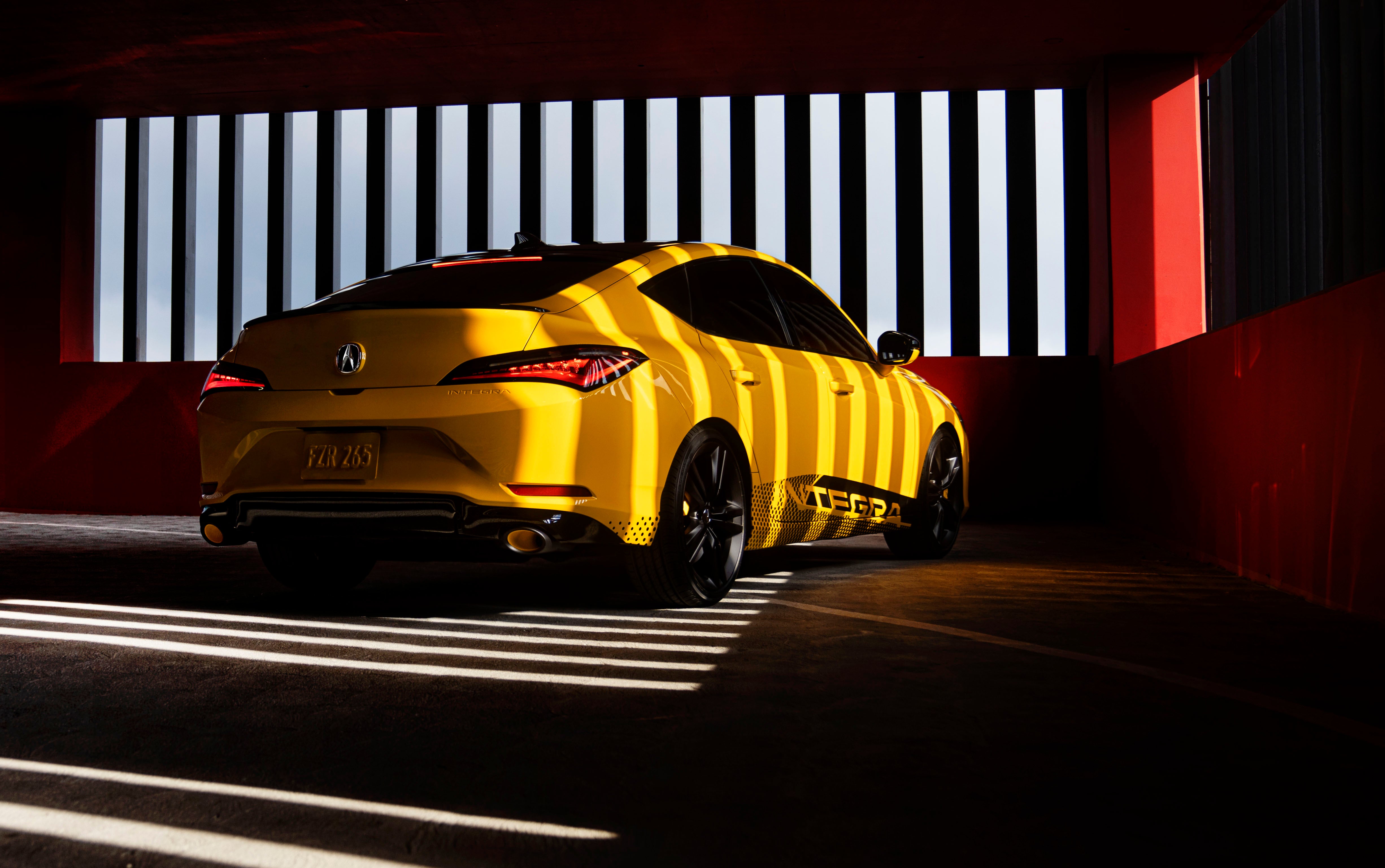 The tail lights are sharp single-piece units inspired by earlier Integras, bearing a “Chicane” signature design. The rear also features pumped arches to contain the 19″ wheels, with Brembo brakes visible at each corner to provide plenty of stopping power. Naturally, the calipers are color-coded to match the car, which really pop from behind the matte-finish wheels.

Headlights are also rather elegantly designed, with a kinked daytime running light giving the car a properly serious demeanor. It’s clear that styling was a strong focus for the reveal, with the striking two-tone paint job and graphics package showing that Acura wanted to make a statement. 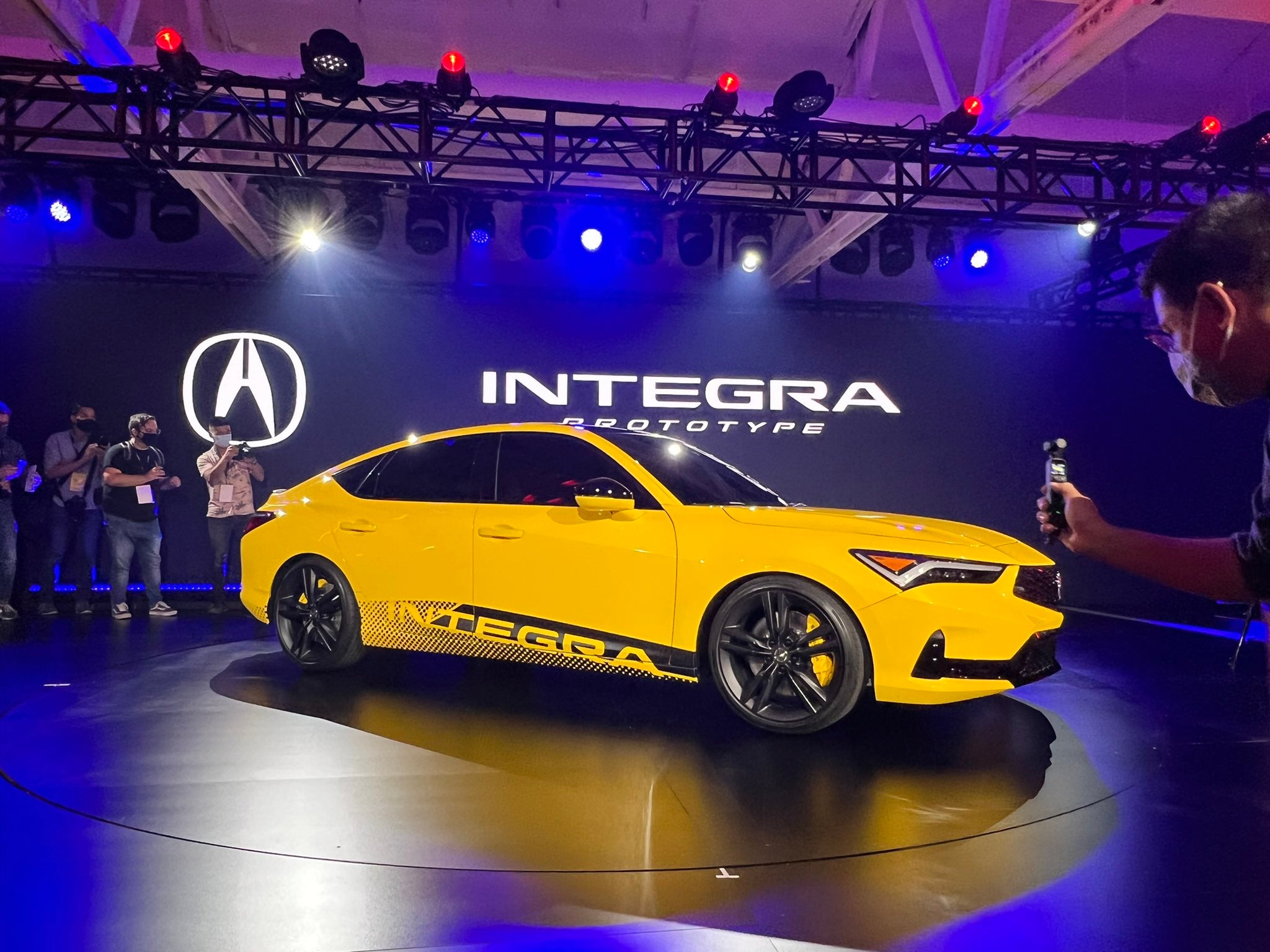 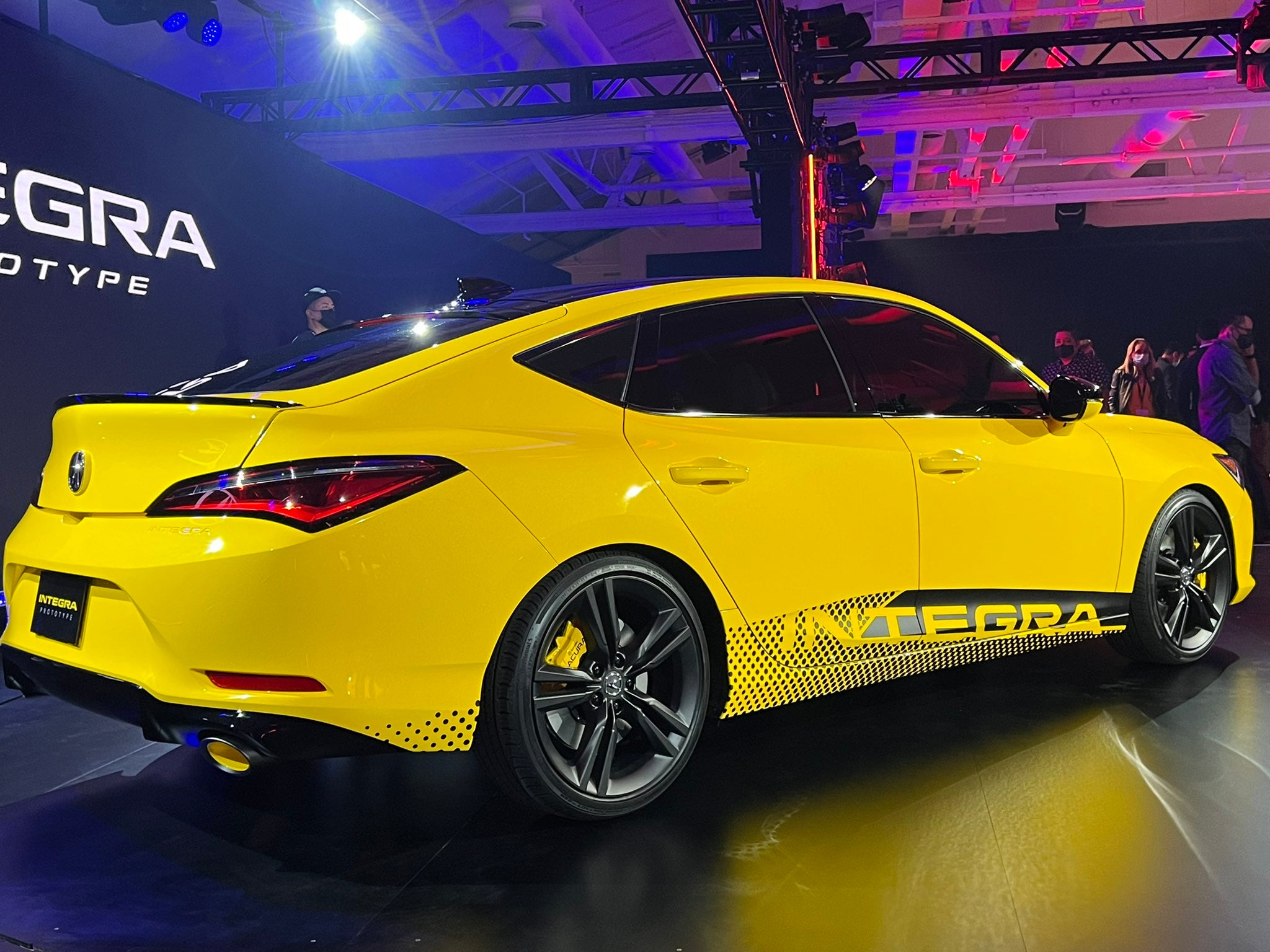 “Now, this is an Integra for the next generation,” said Jon Ikeda, Vice President and Acura Brand Officer. Noting the history of the nameplate, Ikeda was keen to note that the new model is “sleek and sporty like the Integras we all fell in love with.”

It’s clear that Acura is attempting to hedge with the design to some degree. While five-door Integras have always existed, the new design seems to be eschewing the more traditional coupe body style most closely associated with the name. “It’s perfect for active lifestyles,” notes Ikeda, stating the intention of the design. “With its dramatically sloping roofline, this new Integra has a coupe-like presence while maintaining the versatility of a liftback.”

Sporting enthusiasts and track-day fans will likely mourn the lack of a coupe. However, those keen for a sporty experience that’s still practical will likely appreciate the 5-door liftback format. However, with a variety of performance Civic models available in a similar body style, some might raise the question as to what will differentiate the Integra over and above that level.

To that end, expect the Integra to come with some finer touches to help differentiate it from rivals. In its own words, Acura hopes to produce a “premium sport compact” that is both “uniquely aspirational and attainable.” Thus, things like nicer finishes and extra equipment could be the way that the Integra stands apart from the new Honda Civic Si and other sport compacts. It’s an interesting new car from Acura, and one that could win it many customers if things go well. As Ikeda said in the reveal, “This is a big day for Acura.” As the company seeks to rebuild itself as “the performance division of Honda,” it will need the new Integra to get runs on the board to establish that perception in the automotive zeitgeist.

Rocket Bunny Toyota GR86 vs. ’80s-era Corolla—Which Would You Choose?