A Brief History Of The High-Performance Pickup Truck

The (deserved) praise we and others have heaped on the 702-horsepower 2021 Ram 1500 TRX is likely to spark some interest in what has come before it. Yes, we know there was the Chevrolet El Camino SS and GMC Syclone, but what about full-sized trucks? I’d submit that manufacturers first tried to sell a big truck based on it being fast in 1978.

Yes, of course, there were full-sized pickup trucks with big engines, notably my 1973 short-bed Chevrolet with a factory 454-cubic-inch V8 that I desperately wish I had back, despite rust holes you could put your hand through, which I fixed, poorly, before taking it to Earl Scheib (“I’ll paint any car, any color, for $89!”), the equivalent of Maaco back then. The engine was worn out with a compression ratio of like 2:1. But that 454 badge on the front, and that exhaust note—well worth the $1,200 I got for it in a trade for a 1974 Datsun 260Z that vapor-locked every quarter-mile.

But I digress. For purposes of this story, let’s start with the Dodge Little Red Express, the name Little Red Wagon already taken several years earlier by the wheel-standing Dodge D100 with a 426-cubic-inch Hemi. 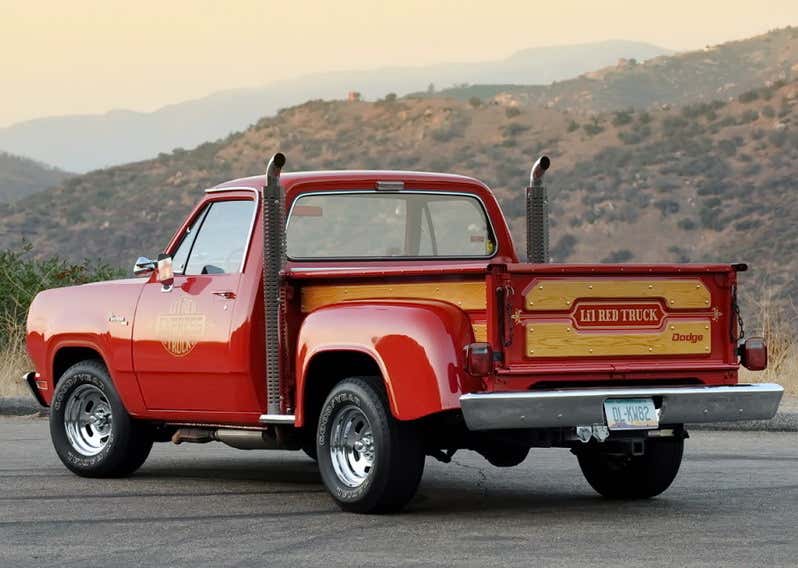 The 1978 Dodge Lil’ Red Express Truck debuted in a world where Dukes of Hazzard was just months away, where Smokey and the Bandit had been released in 1977, and its sequels and Urban Cowboy were not far behind.

America was definitely in a Good ‘Ol Boy mood, and Dodge decided good’ ol boys with $8,000 or so would enjoy the ultimate redneck truck. So they pulled a D100 off the assembly line, gave it a hot-rodded (225 horsepower but it felt like more) 5.9-liter V8, a wooden plank bed floor, some wood on the outside of the bed, and most notably twin chrome exhaust stacks that stood up vertically just behind the cab, like Jerry Reed’s 18-wheeler in “Smokey.” Attractive tires and wheels completed the exterior package. It only came in rear-wheel-drive.

And to cap it off, a huge gold decal on the side proclaiming it to be “Lil’ Red Express Truck.”  And it was quick. Car and Driver claimed it was the fastest production vehicle sold in 1978 from 0 to 100 mph, and ran the quarter-mile in 14.7 seconds. That also should tell you a lot about the performance car market in 1978.

Dodge had modest expectations for Lil’ Red, but it beat the predictions for the 1978 and ’79 model years. I found the countrification just too much to handle, and bought a red stepside Dodge 4×4 with big tires on factory white spoke rims. It was the gas crisis period, so I got the 225-cubic inch slant-six. It got 11 mpg when climbing a mountain, driving in traffic, on the highway, idling. Eleven mpg. There’s a lesson there. 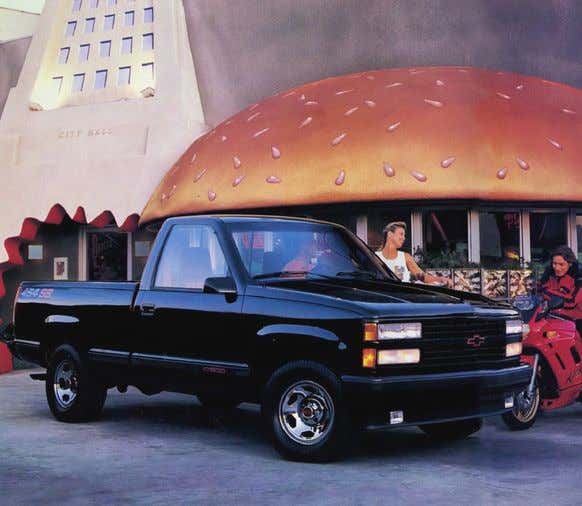 1990-1994 Chevrolet SS 454 pickup: It really wasn’t that different from my 1973 454 truck, just packaged better and with a compression ratio of 7.9:1. It made 230 horsepower, again a modest measurement, and 385 lb-ft of torque. Far more understated than the Dodge, the Chevy had one Achilles Heel: It only came with a three-speed automatic transmission, and it was maxed out not long after you passed 80 mph.

Inside and out, the SS 454 was a solid truck, with a lot of power that really wasn’t that useable – short bed, regular-cab trucks are not great for hauling. “We have built,” a Chevrolet executive told me, “the world’s fastest, most useless tow truck.” Harsh, but true. 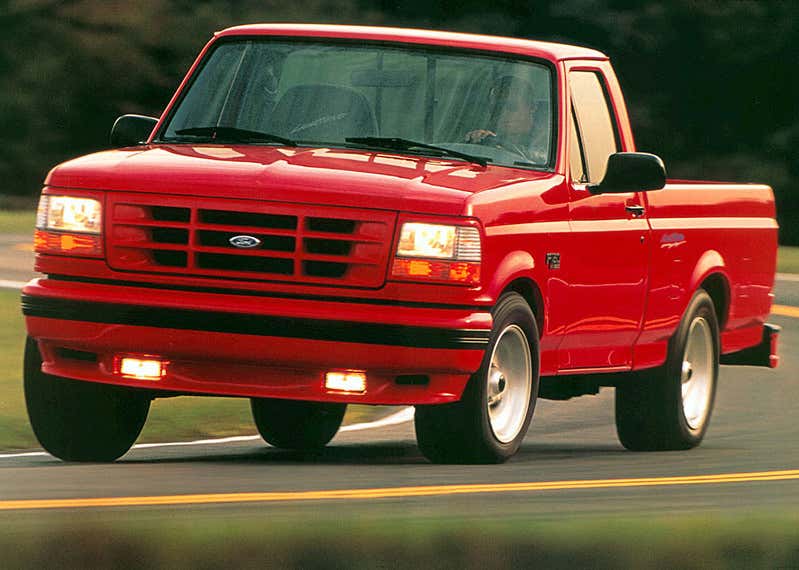 Under the body was big stabilizer bars, Monroe performance shocks, stiffer springs, 17-inch aluminum wheels and the good ol’ Ford twin I-beam suspension that was touted in commercials, but was never made for high performance.

I remember the press launch for this thing back in the day. We were allowed to take our Lightnings on a long slalom course, and on the two I drove, the power steering pump cavitated halfway through and I was left with manual steering until the pump and the fluid caught up. Not fun, and it affected my time, but it pointed that the naturally-aspirated Lightning was made to go pretty fast in a straight line (15.5 seconds in the quarter-mile), but not much else.

First-gen Lightning resale value remains higher than you’d think because it was a fun truck to drive, just not the hot rod it was supposed to be. 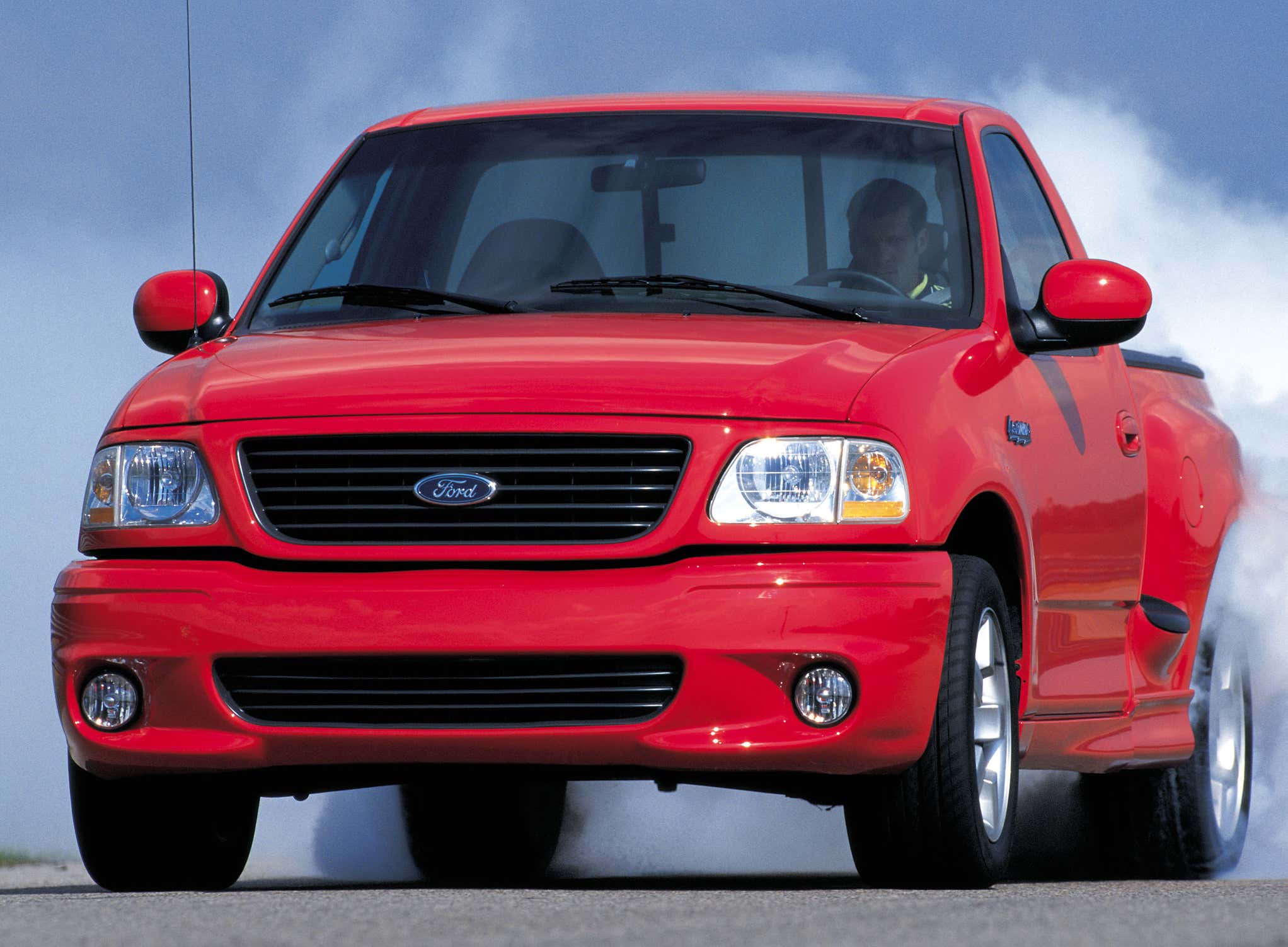 1999-2004 Ford Lightning: Now we’re talking. This SVT Lightning absolutely blew me away, and as executive editor of Car and Driver at the time of its introduction in 1999, I forced the Lightning onto the cover, the first truck that had ever been featured as the main vehicle (Thus triggering a box full of “If I wanted to read Truck and Driver, I’d buy that magazine” letters.) Fortunately, the issue sold well, thus removing my neck from the chopping block.

The Lightning deserved a cover. The fluid lines of the recently restyled short bed stepside truck lent itself perfectly to the Lightning’s big 18-inch tires and wheels. And the supercharged 5.4-liter V8 made every bit of the advertised 360 horsepower, and the four-speed automatic was nicely matched to it. Handling was just excellent, it had a good payload rating, and you could drive it daily with no drama.

I drove it from 0 to 60 mph in 5.2 seconds, thus placing me in the shithouse with Ford, because while they loved the story, I supposedly agreed to not publish test numbers. Oops.

Anyway, the red, white, or black Lightning was a major hit, and retains substantial resale value today for well-kept specimens. And it proved you could have it all with a full-sized truck. 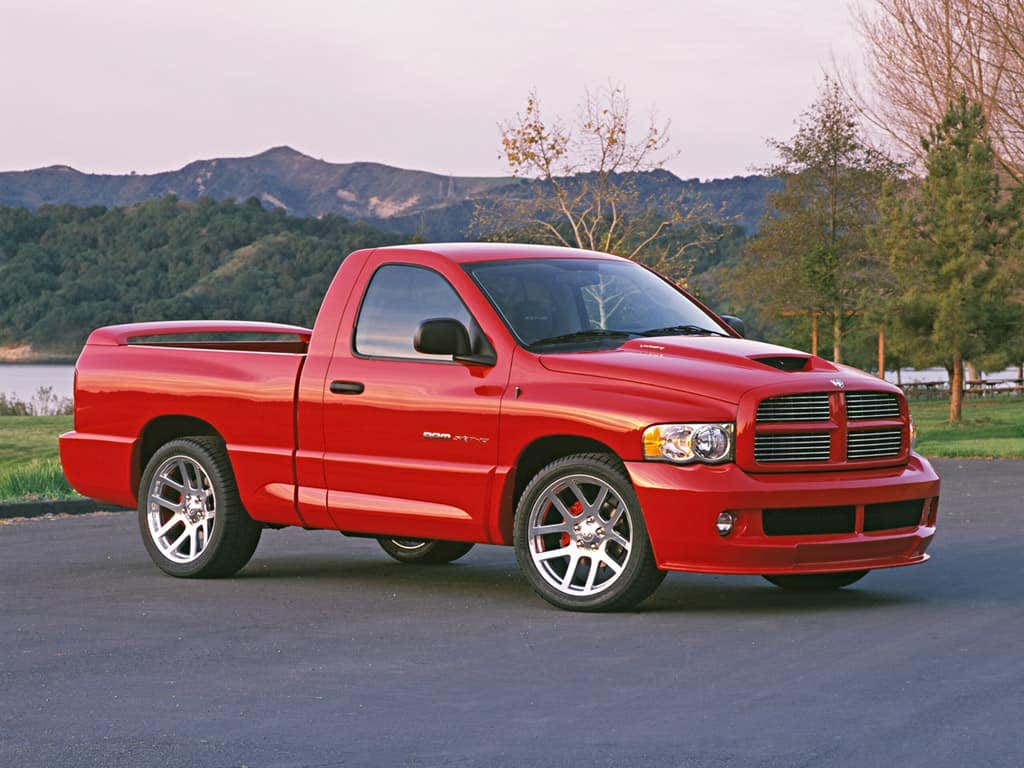 2004-2006 Dodge SRT-10: It was inevitable, just like Fiat Chrysler is finding new places to put the Hellcat motor, that Dodge in the 2004 model year wanted another place to put an almost-Viper-V10, and found that it fit under the hood of a Dodge Ram.

It was the most over-the-top truck built (well, until the TRX, and we’ll get to that in a moment). The 8.3-liter V10 had 500 horsepower and was mated to an automatic transmission. The short bed version could do 0 to 60 mph in a still very respectable 4.9 seconds, and the Quad Cab version was a little slower.

Suspension used some pieces from the heavy-duty Ram, but were mostly near-aftermarket parts from Bilstein and other performance companies. It all worked: The truck was heavy as a brick, but was lighter on its feet than you’d think.

One quick story about the SRT 10: At the press preview, we were presented with an autocross course early on, and I never left. Dirt-tracking the big truck without hitting cones was so much fun.

Too much, in fact. I noticed that above the windshield, there was a readout of instant fuel mileage, as well as average fuel mileage. I cleared it every run, and a Chrysler PR representative and I took turns seeing who could get the lowest fuel mileage. Which we did until a Dodge engineer practically yanked us from the truck. I think I won with a run of 2.8 mpg. This was not that far off the actual EPA mileage for the Quad Cab: 9 mpg city, 12 mpg highway.

2010-2020 Ford Raptor: More proof that Ford knows the performance truck market. The Raptor is in its second generation, starting in 2017, and is powered by the 3.5-liter Ecoboost V6, which has 450 horsepower, delivered through a 10-speed automatic.

Plenty of power, but it isn’t a V8, which the first generation of the Raptor was, originally a 5.4-liter, and then a 6.2. The V6 works just as well, but Raptor owners are the type who like loud exhausts, and the 3.5-liter doesn’t quite lend itself to that.

Still, both generations of Raptors are a blast, on-road or off. Evil styling and a nice interior make this a genuine success, as evidenced by constant above-retail pricing. 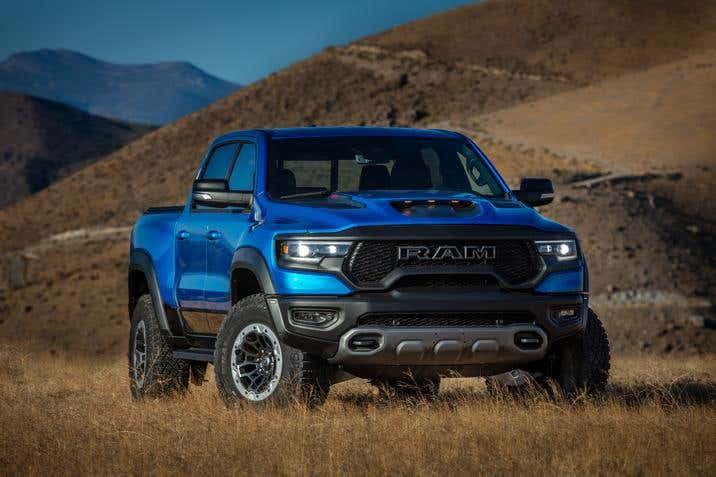 2021 Ram TRX: While personally, I think the styling is a little conservative compared to the Raptor, the TRX, which we’ve tested, is the best performance truck ever built. Heavy as an anvil, it is so overbuilt that if you drove it like a civilized person, it should last forever.

But it begs you to be an idiot, and take it on winding paved roads, and right off the end into to woods or sand or rocks. The 702-horsepower supercharged Hellcat V8 is wonderful in every application, including here.

This is the ultimate performance truck. Until a more ultimate one comes along.

NIO Ramps Up EV Production To Over 5,000 A Month
Car Reviews