Home » News & Features » Ad of the Week: When Pontiac Pushed a Pair of 'Economic' Supercar Wannabes Ad of the Week: When Pontiac Pushed a Pair of 'Economic' Supercar Wannabes

Almost ten years ago, having spent 84 years in the business, Pontiac was terminated by a bankrupt General Motors in the middle of the Great Recession, a dark phase for the industry in which Saturn, Saab and Hummer met similar fates. We were sad when it happened, and while we continue to miss the performance brand Pontiac once used to be, we also acknowledge that by the time GM pulled the plug, there just wasn’t much left worth saving.

Welcome to Ad of the Week! Vintage ads are fun. They come from a time when enthusiasts gathered their knowledge mostly from print magazines, TV and radio ads, and billboards sized to fit several land yachts. We’ll be taking a deeper look at one every week to explain the claims, context, and how that all worked out in reality.

Pontiac began using its “We Build Excitement” tagline in the early 1980s, not only for its print and television ads, but also on a wide range or promotional items such as jackets, t-shirts, beverage cooler bags and display license plates. In later years of this campaign, Pontiac used Patrick Steward for its TV voiceovers.

It’s not a bad line, to be honest. Though it’s hard to separate the optimism in those three words from the fact that Pontiac is dead—it’s always going to feel a little tragic. In retrospect, it’s not a great sign if after decades of existence a company needs to mount an ad campaign telling people it’s now building an emotion instead of its core product. But I guess that’s necessary when the core product you’re talking about is a four-cylinder Firebird. 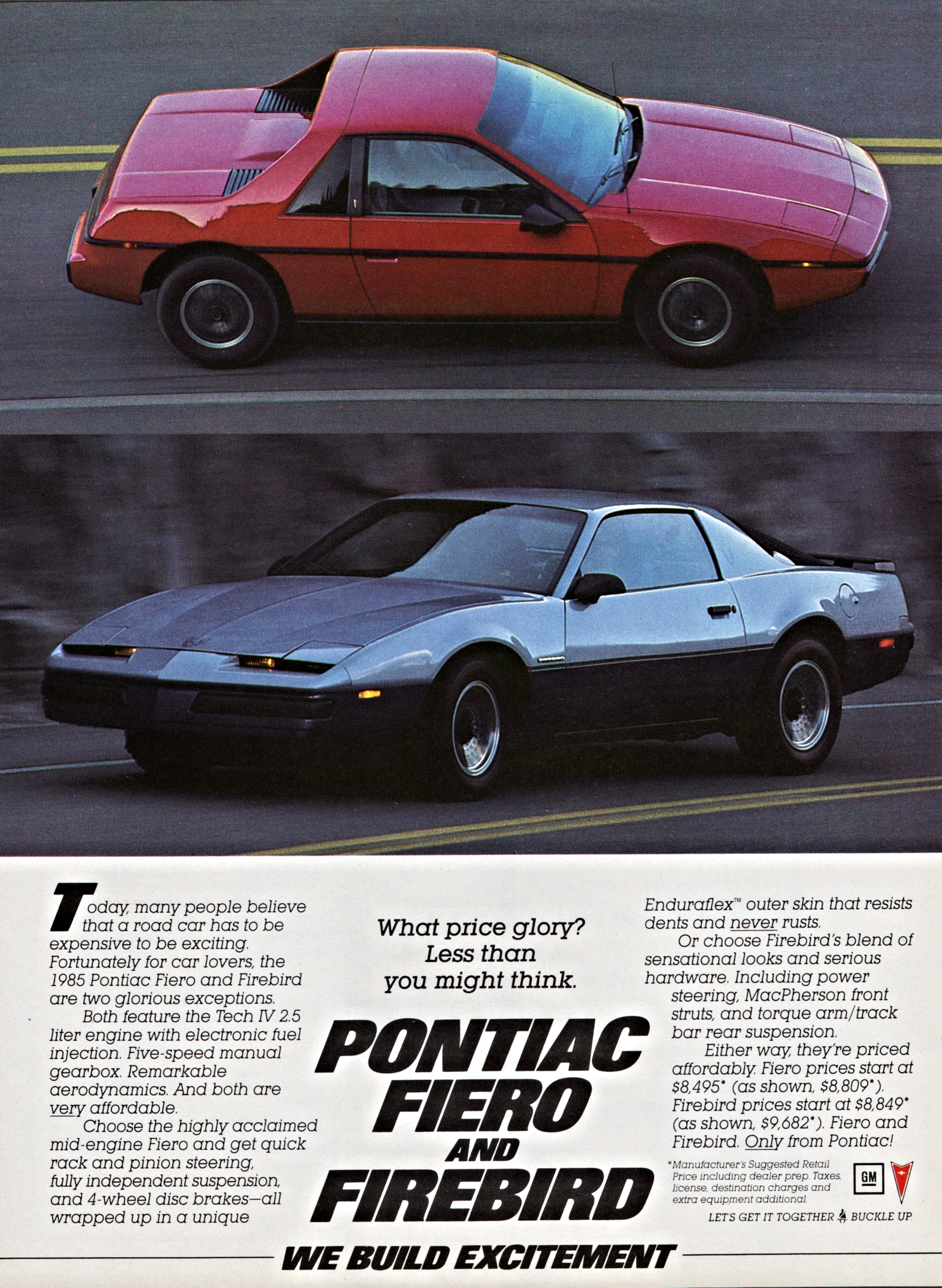 When designing the third-generation Firebird, Pontiac knew the fuel-guzzling glory days were over, and gas milage had to be improved by cutting weight. Thus, the new car got a four-cylinder option when it launched in 1982: the “Tech IV 2.5-liter” mentioned in the ad copy, which was really a dressed-up version of GM’s venerable Iron Duke block. That same block would also end up in the mid-engine Fiero in 1983 as well after its planned V6 was axed due to budget constraints.

For this ad, Pontiac picked a Fiero in red, a shade that suggests more when the engine is the middle. And with that suggestion, the job is at least half done already. The Firebird on the other hand is a subtle two-tone wonder enhanced by such amazing innovations as power steering and a suspension that will just do in a car packing not much torque to talk of. For 1985, affordability was king, even if the word “excitement” remained in bold capitals.

Two stray observations: those prices are all under $10,000 (I know, inflation exists), and this was still a time where automakers and regulators were still trying to convince people to wear seat belts. “Let’s get it together” wouldn’t be a bad general-purpose line for 2020 either.

While the Trans Am made the F-body platform look futuristic enough to become Knight Rider’s hero car, by 1985 the creators of the series felt the need to introduce Super Pursuit Mode to keep KITT fresh enough for the final season. At Pontiac dealerships, customers could still choose a Firebird with the same 2.5-liter Iron Duke four-cylinder as in the Fiero. In the larger front-engine car whose long hood suggested a V8, the Tech IV could reward drivers with up to 34 miles per gallon thanks to having single-port fuel injection and a significantly lighter body than a 1981 Firebird’s.

Meanwhile, the Pontiac Fiero’s easily replaceable “Enduraflex outer skin” over its spaceframe chassis turned the mid-engine car into the workhorse of the fiberglass replica supercar industry. When pointing at affordability, Pontiac meant that in 1985, the price difference between the two Iron Duke cars was only $345. True even when the Firebird shown in the magazines had $833 worth of extras on it. After the ’85 model year, the 88-horsepower LQ9 2.5-liter four-pot was discontinued in the Firebird, in favor of GM’s somewhat more respectable 2.8-liter V6 engine.

While the third-generation Firebird was the child of the wind tunnel with its pop-up headlights, 62-degree windshield slope and functional rear spoiler, the Fiero was GM’s equally sleek, yet more ambitious entry into the mid-engine field at the budget level, and a product that hit the market early enough to see Toyota’s MR-2 only exist as 1983’s SV-3 concept car.

The budget mid-ship segment is no longer here to indulge us, while four, or even three-cylinder turbo engines pack power that puts any Pontiac Turbo V8 to shame. Now, just imagine Kia producing a modern-age mid-engine two-seater with the same 300-horsepower 2.5 it jams into the front-engine and rear-drive 2021 Stinger GT. Such a pair would deserve a full-pager in print.