Aprilia showcased the RS 600 supersport and the Tuono 660 at the ongoing EICMA motorcycle show. Both models attracted a lot of attention and grabbed massive eyeballs as well. Amidst the launch and the hullabaloo of the two 660 models, Aprilia very quietly teased the Tuareg 660, an adventure bike based on Aprilia’s 660 platform. In the middle of the Aprilia pavilion at EICMA, in a glass box a bike was kept in the shrubbery very well concealed and parts of it poking out, just enough to confirm that the new 660 cc ADV is no mythical motorcycle but a reality. 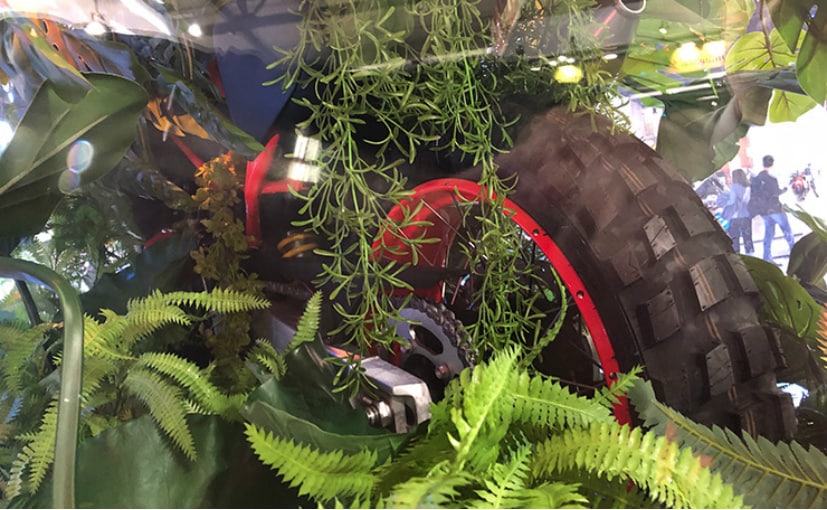 (With the Tuareg, Aprilia will complete its trio of 660 cc middleweight motorcycles, which include the RS 660 and the Tuono 660)

One can see bits like a 21-inch wheel with knobby tyres, a bashplate, steel trellis frame, handguards and an ADV-inspired fairing along with other giveaways which confirm off-road worthiness of the bike. The name ‘Tuareg’ was written on the tail section of the bike and harks back to the company’s old African rally motorcycles. Tuareg is also the name of a Bedouin tribe from North Africa and sits well with the theme of the motorcycle.

Going by the looks of it, the Tuareg 660 could get the same 660 cc parallel-twin Euro 5 compliant engine which puts out 100 bhp. The engine has been derived from the front cylinders of the 1100 cc Aprilia RSV4 powerplant and uses a 270-degree crankshaft design.

We expect the Tuareg 660 to be loaded with electronics and an inertial measurement unit (IMU) like the RS 660. With the RS 660 having a dry weight of 168 kg, we expect the Tuareg to be a lightweight middleweight adventure motorcycle and it could be launched sometime in late 2020 or early 2021.