Bruce Meyers, who rose to fame with the Meyers Manx dune buggy in 1967 and a triumphant win at the Baja 1000, has passed away at 94.

Born in Los Angeles in 1926, Meyers grew up surfing and roaming the beaches of Hermosa and Manhattan Beach. After high school, Meyers enlisted with the Merchant Marines and served in the Navy during World War II; he was assigned to the Bunker Hill aircraft carrier, which was hit by two Kamikaze pilots in May of 1945 at the battle of Okinawa. The attack killed nearly 400 of Meyers’ fellow servicemen and he was forced to jump overboard. As an experienced swimmer, he saved one of the Kamikaze pilots from drowning and then volunteered to help get the mortally wounded ship back to port. 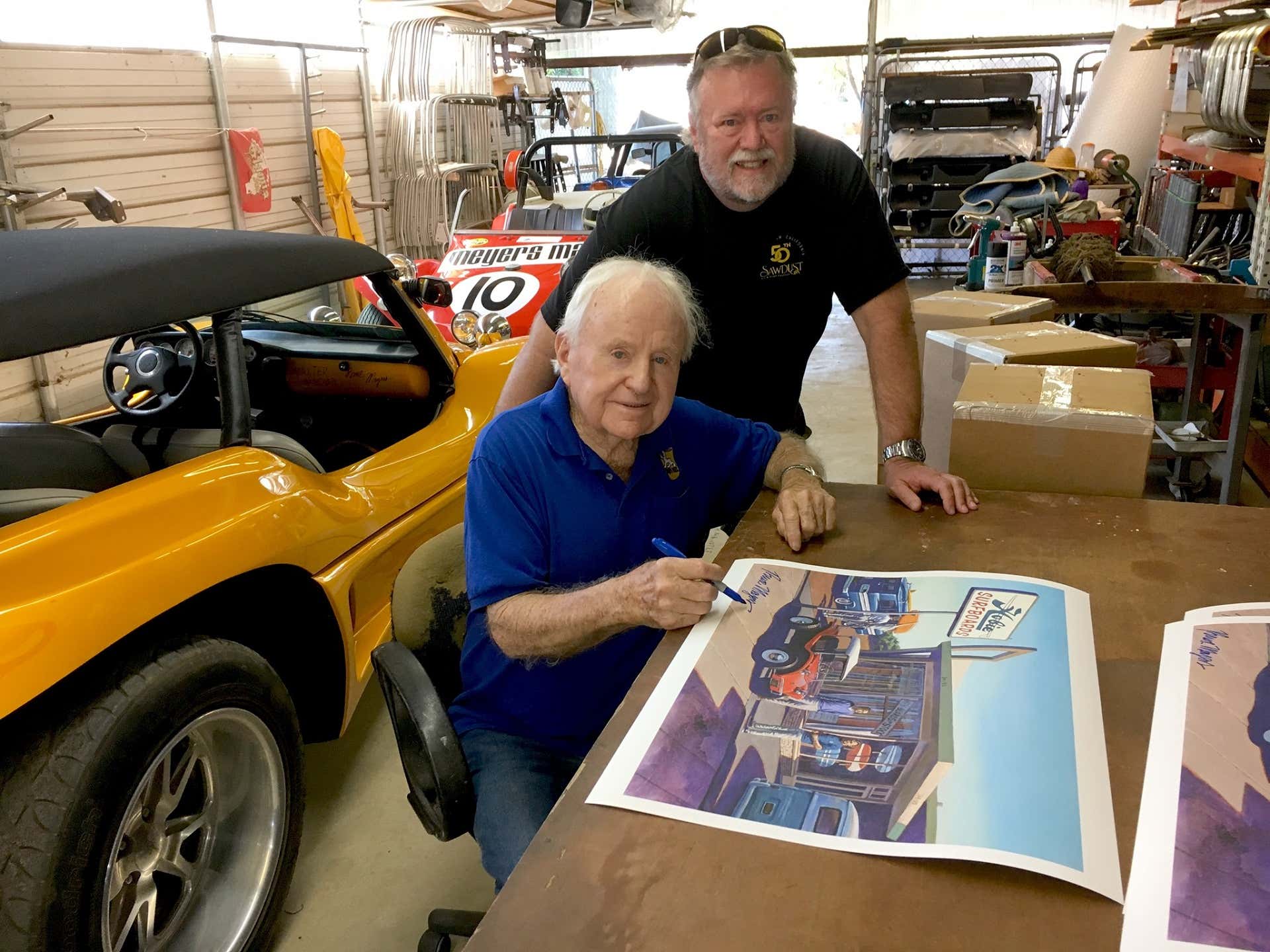 When he returned to the U.S., Meyers attended the Chouinard Art Institute and specialized in life drawings. Meanwhile, he pursued off-road racing and surfing and wanted to come up with a vehicle that could navigate the sandy beaches better than his 1932 Ford hot rod. He designed his own wooden body bucks and brushed on fiberglass to create the first tub of what he dubbed the Manx after the short-tailed cat of the same name.

Meyers put together a team in 1967 to race “Old Red”, one of his fiberglass-bodied buggies, in what was then called the Mexican 1000 in the Baja Peninsula. They raced for 832 miles on unpaved roads from La Paz to Tijuana and completed it in a record 34 hours and 45 minutes, beating the previous record (which had been set by a motorcycle) by an astonishing five hours.

Twelve dune buggies with fiberglass bodies were created when Meyers realized he could not sell the Manx for a profit using that process. He switched to a shortened Volkswagen Beetle body and worked on perfecting it. According to the Off-Road Motorsports Hall of Fame, B.F. Meyers & Co. built 5,280 Manx kits, several hundred Manx 2s, and about 1,000 Meyers Tow’ds by 1970. 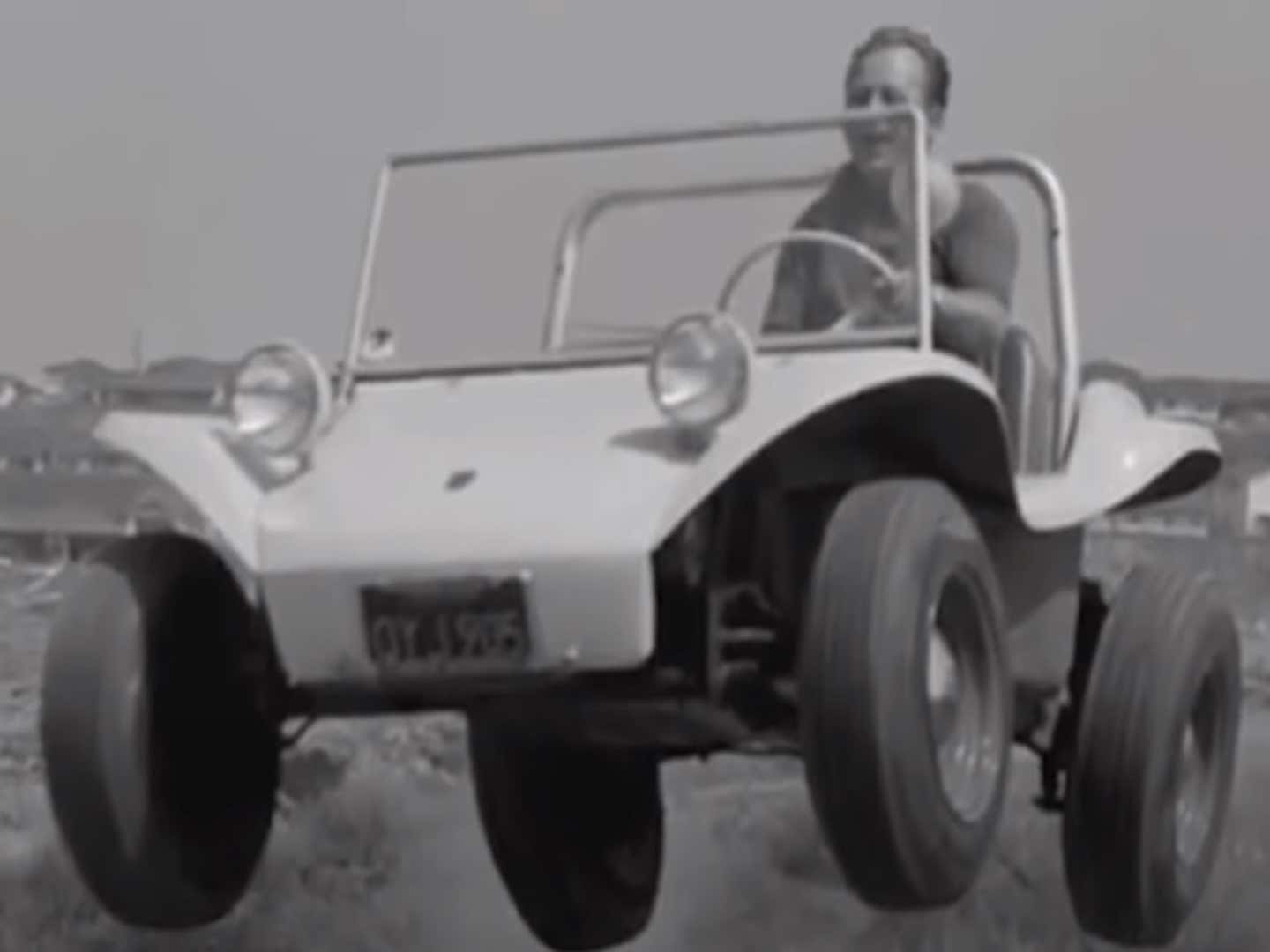 Unfortunately, Meyers could not fill the influx of orders that followed his record-setting run fast enough, and some 70 knockoff companies moved in on the market. Unable to defend his patent in court, Meyers left the scene to build boats and customize cars (like a Rolls Royce limousine) for more than two decades. In 1994, Meyers and his wife Winnie started the Manx Dune Buggy Club to test the market for interest in a new buggy. As a result, he created 100 limited edition, signature series kits that sold out in a matter of weeks in 1999.

In 2020, the Meyers Manx that Steve McQueen drove in “The Thomas Crown Affair” sold for almost half a million dollars at auction
through Bonhams.

In the last twenty years of his life, Meyer and Winnie were active in Manx clubs, visiting fans and inspiring off-road dune buggy dreams all over the world. Meyer told Jay Leno in 2014, “I’m the kid who never grew up.” And his legendary love for surf, sand, and hot rods will live on for generations to come.

How To Embarrass A McLaren On Drag Strip: Use Another McLaren