Home » Fast & Furious F9: Ridiculouser Than Before and Yet We Must Watch It Fast & Furious F9: Ridiculouser Than Before and Yet We Must Watch It 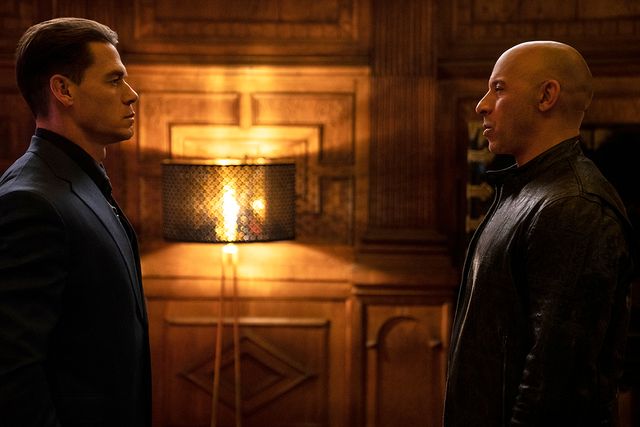 The ninth – yes there have been nine of these in the Fast & Furious juggernaut – opened with a bang, a crash, several explosions and one or two kablamos, yesterday and by golly it was… a movie.

In keeping with the main character’s oft-repeated lament, growled out in a frog voice that sounds like decorative garden rocks rolling around in an empty cement mixer, “It’s all about La Familia.” This dictum comes home to roost in the latest F&F, as we see with our hero Dom Toretto, played with delicate artistry (who am I kidding????) by (the otherwise unemployable) Vin Diesel. The Toretto familia’s got roots, see? And they go way back. All the way to the childhoods of Dom and – who could have seen this coming? – Dom’s brother Jakob (played surprisingly well by wrestler-turned-actor John Cena). Who knew Dom had a brother? Well, somebody had to replace The Rock after he and Dom allegedly feuded. 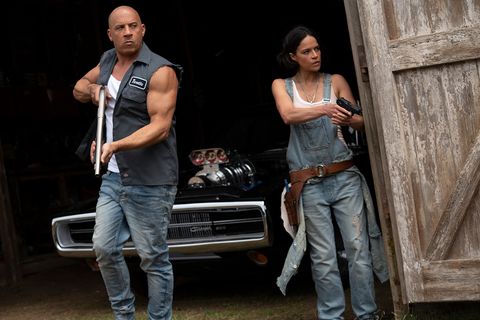 As is often the case in las familias, these two hold grudges. Well, okay, not just grudges, maybe a little more than that. Jakob killed Dom’s dad!!!!!! (Who was also Jakob’s dad. And sister Mia Toretto’s dad.) Or did he????? In any case, Dom just can’t seem to get over the whole dad-killing thing which, if it really happened the way Dom believes it did, was maybe a good reason to be upset. We know this because there are many, many flashbacks with a young Dom and his younger brother. Because of the patricide, Dom boots little brother Jakob from the family, and Jakob, in an I’ll-show-you-who’s-getting-booted approach, becomes… a globe-trotting superspy just like Dom! How we didn’t know this for the first eight movies is one of Hollywood’s great mysteries.

Dom and La Familia – the cobbled-together familia, not Dom and Jakob’s real familia, the latter which includes Dom and Jakob’s sister Mia (Jordana Brewster), who was married to Brian (Paul Walker) who, despite the tragic passing of the real actor Walker, is not dead in this movie but is supposed to be babysitting his and Dom’s children while all this is going on, which seems just patently absurd if you… wait, I forgot where I was going with this. Yes, the plot can get somewhat byzantine, and oftentimes the action sequences make no logical sense, like when Brewster – I am not making this up – kills a guy with a soup ladle.

Let me digress a second. Physicists of the world going all the way back to Isaac Newton will be shocked – shocked! – to realize they have all been wrong about that law that an object in motion tends to stay in motion. Likewise, orthopedic surgeons will find themselves out of work as it now appears people can jump off four-story buildings repeatedly without getting hurt! Dom actually catches Letty from about a 100-foot fall by driving his Dodge Charger over to where she’s about to land and catching her with the hood of his car! Not only is she completely unharmed but she smiles lovingly at him through the windshield. This is romance not seen since “When Harry Met Sally.”

It’s possible everyone – from director Justin Lin on down – knows it’s all ridiculous and is just playing it all up for fun. (But there must be drama so you have a lot of WWF stare-downs between muscly, stoic manly men who just need a hug but can’t admit it.) We know it’s ridiculous, too, and for the most part we all just play along from the 32nd row. In fact, Tyrese Gibson, who plays comic relief specialist Roman Pearce with perfect timing and delivery, wonders aloud early in the picture why none of the cast has ever gotten hurt. It’s a reality check and a funny one. Indeed, Gibson’s Roman is, in my opinion, the only thing that has kept the whole franchise going for nine installments. It’d never work if all there was for two hours and 25 minutes (!) of movie was crash scene after fight scene after spacewalk.

Yes, there’s a spacewalk. Lucas Black, the guy who starred as lead Sean Boswell in Fast & Furious 3 Tokyo Drift, inexplicably returns in F9 as a geeky rocket scientist wannabe who builds a Pontic Fiero-bodied spaceship piloted by Roman and Taj (Ludacris) into space where they must shoot down a satellite before it uploads a data file and destroys the Earth. Wait, a Pontiac Fiero? Without these comic and patently ridiculous moments (one actor is named Ludacris, after all), we would all go insane. Therefore, let it be said that Tyrese Gibson is really the only reason F&F has lasted all these years. 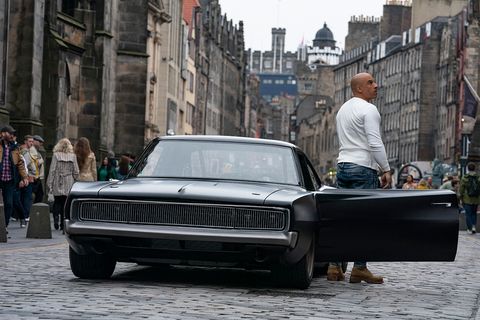 What about the cool cars? They are here aplenty in a true product-placement-palooza:

There are at least four Dodge Chargers: a ’68 with a mid-mounted V8 (that you can buy!), a ’70 Charger, a ’70 Charger R/T that was Dom’s dad’s, and a 2016 Charger SRT Hellcat; Jeep Grand Cherokee Trailhawk, Jeep Gladiator pickup, a new Toyota Supra, Ford Mustang GT, Jaguar SV Project 8, Acura NSX, Noble M600, Apollo IE, a Mercedes Unimog-based double trailer thing called the Armadillo, and a cameo at the very end of a blue R34 Skyline GT-R that maybe was supposed to suggest that Brian (Paul Walker) was coming to the final banquet BBQ, where product-placed Corona beers were seen in abundance, each with the label facing the camera.

There is so much more to tell, but I’ve reached my Federally mandated limit for writing about FF, at least for today. If you want to see it, you may find that you can piece together a coherent plot, ridiculous though it may be, and you’ll see some cool cars in between the impossible chase scenes (Jakob escapes across London rooftops by firing zipline guns from building to building, only to be intercepted when Dom leaps from another building and the pair crash through a glass window to… ) It’s not the worst movie ever made. But there will be at least two more, so they’ll keep trying…

Have you seen FF9? What did you think? Log in to the comments and let us know.