The late 1990s and early 2000s were a golden age to be an import car enthusiast. Magazine covers were plastered with Mitsubishi Lancer Evolution VIIIs, Honda kids turbocharged and modified any four-cylinder they could get their hands on, and the scene went from an underground movement to being immortalized in the first three Fast & Furious movies. Kaila Yu was there for it all.

“If you didn’t go to an import car show in the 2000s, you’ll never know what it was like,” Yu, a Taiwanese-American former model, singer, and socialite, tells me via a Zoom call recently. She, along with other women like Aiko Tanaka, was an import model when the scene was at its absolute zenith. Women—specifically Asian women—posed and modeled on hotted-up rides, like modified then-new Honda S2000s or final-generation Mazda RX-7s. Yu’s presence, look, and charisma landed her on the cover of a multitude of import tuner magazines such as Super Street Magazine and DSport. Eventually, she even wound up with a small role in The Fast and the Furious: Tokyo Drift. 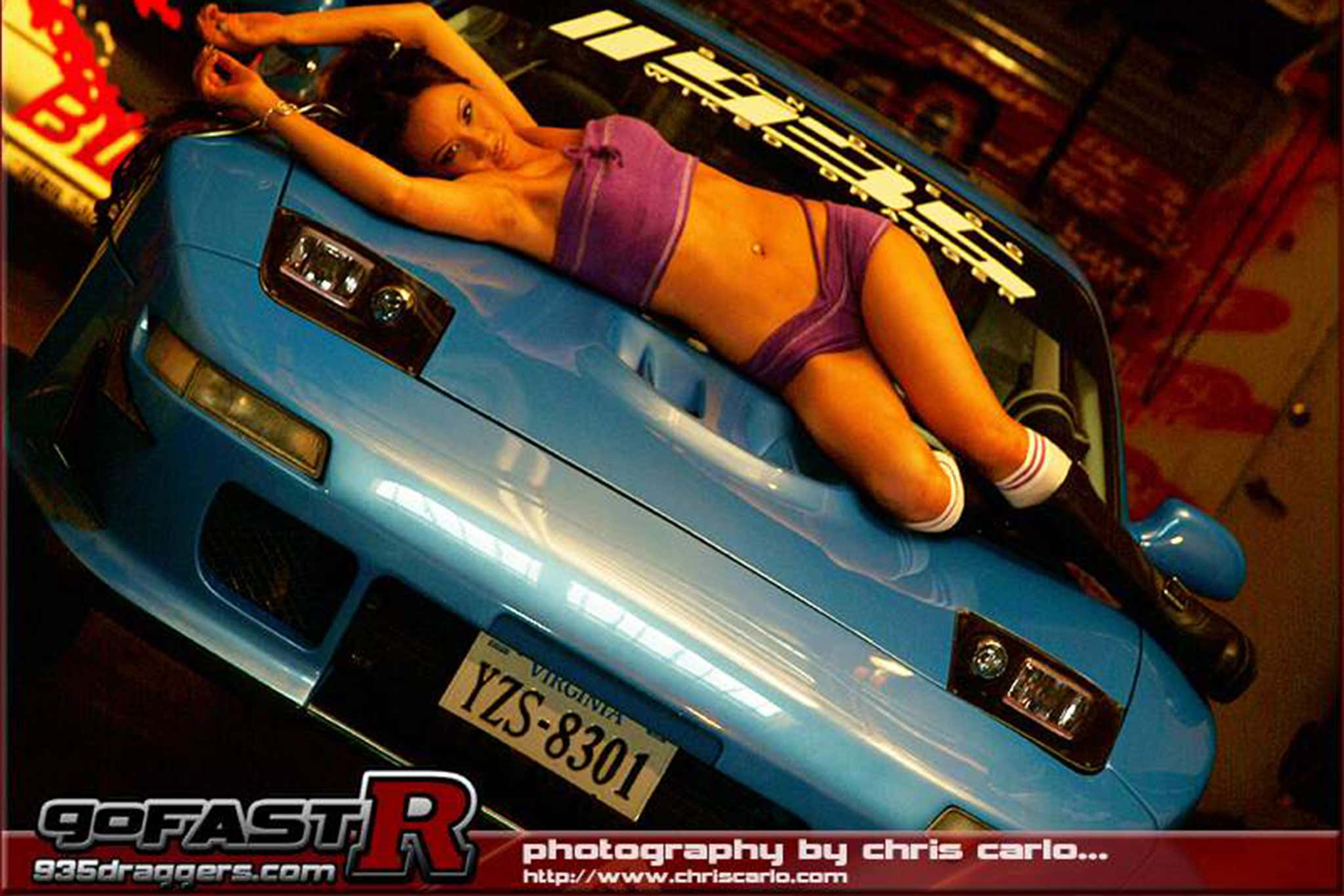 “Hot Import Nights—I mean it was 25,000 kids, 500 cars, and everyone was ready for a party,” she remembers. Back then, import models were abound at those shows.

[May is Asian American and Pacific Islander Heritage Month. Here at The Drive, we’re celebrating it by lifting up and highlighting AAPI voices in the automotive space. Our hope is that in driving visibility, we can help make the car community an even more welcoming space—to convince those who perhaps have not always felt like they belonged that they absolutely do belong here. Diversity in perspectives and backgrounds only strengthens the group as a whole. It is why representation matters.]

Now, those days are gone. Hot Import Nights and most any other import car show are much smaller than they used to be. The magazines that went out of their way to feature Asian women posing provocatively on tuned cars, have all mostly died. The import models have moved on, the cars have been sold, and for a lot of people, the party is over—an era only to be remembered in the early Fast and Furious movies.

Not for everyone, though.

Lately, Gen Z has fallen in love with the Y2K aesthetic and culture. Big time. Platform flip-flops, crop tops, and high wasted jeans are worn by the most popular TikTok stars like Addison Rae or Charli D’Amelio. Hyperpop—a whole genre of music that intentionally references old pop music trends of the 1990s and 2000s—is a thing. It was only a matter of time before the TikTok users would find and fixate on import models. And you can’t say “import model” without also mentioning Yu.

Yu, as the comments on her videos overwhelmingly read, is “The Blueprint.” It’s a slang term for someone so quintessentially themselves in an era they aim to emulate that they obviously are the epitome of said trend. That person is the original plan, or The Blueprint, if you will. Her popularity is undeniable: Yu has close to a quarter of a million followers on the app, with many of her insightful videos regularly cresting more than a million views. And through the pervasiveness of TikTok, Yu has been spilling the tea on what it was like to be in those spaces in that era and where a lot of those other models have gone.

Yu started her TikTok during the pandemic, and initially, it wasn’t focused on her past life as an import model, or her outlook as an Asian woman. “At first, I kind of did catchy content, like say, toilet paper [shortages],” she says. She also branched out into style and informational content, which clicked and skyrocketed her number of viewers. Then she narrowed it down when she realized a huge number of Asian women were watching her videos. From there, she’s been able to make things more personal and speak about her own experiences, which has resonated on the platform.

Particularly, she shares a lot about her days as an import model during the early 2000s. Sometimes, it’s videos about the quintessentially 2000s outfits she wore; Gen Z can’t seem to get enough of airbrushed tube tops and pleather hot pants. Most of these kids weren’t alive yet and they’ve latched onto Yu. “I think Gen Z hates millennials but loves Gen X,” she says, hazarding a guess.

With 1.5 million views, her most popular import model-video is “Whatever Happened to Kaila Yu?” Despite Tiktok having a time limit of 60 seconds (only recently increased to three minutes for certain creators), Yu packs in a full overview of where her career went after import modeling. Most of Yu’s videos follow a similar format: overviewing an import model or prominent Asian woman in entertainment. Or, sometimes her content talks about some of the things she’s noticed when modeling, like why DSport magazine models weren’t allowed to wear shoes.

Sure, there are legitimate critiques that the sexualization and fetishization of Asian women can be harmful, which Yu herself has talked about it recently. Yet, by the same token, there were so few Asian women from this era who were universally seen as attractive or even sexy. Along with other import models, Yu’s visibility was very important to a young Asian girl who might have been constantly told she’s not attractive because contemporary beauty standards almost always reinforce how whiteness is ideal.

This was certainly the case for Yu. Back when she was a teen, she explains, there simply weren’t very many Asian female role models for her to look up to in the media. “I get a lot of messages from girls who say they want to be an import model,” Yu says and laughs. “You gotta dream bigger than that!” Yu says that her influence is double-sided, explaining that import modeling isn’t exactly a world-changing career.

Yu regarded Sung-Hi Lee, an Asian pin-up model, as an inspiration who eventually brought her to import modeling. “When I was growing up, my only role model was Sung-Hi Lee, so that kind of shaped my path where I chose to go,” she says. Early in her career, Yu submitted her photos to Lee’s website. Lee was so impressed she left a voicemail on Yu’s phone, and featured Yu on her website. From there, Yu’s modeling career took off.

And that era, that golden age of car shows and tuner culture? That was mostly Asian-run, according to Yu. “When you went to Hot Import Nights, Asians ran the show,” she says. “We felt like we were in power. It was that little niche where we could go where you felt community.”

But on her TikTok, Yu has voiced some pointed critiques for the Fast and Furious movies, which famously drew attention to the import scene. As a prominent force in the import model industry, Yu was an obvious shoo-in for the Tokyo Drift movie. All was right in the world, as it seemed like Asians were finally getting their due for the scene they created. Yu was pretty stoked to be in the movie.

But Yu questions if Tokyo Drift was truly good representation. The movie is set in Tokyo, but there’s no capable Asian female lead and the Asian women who do appear in it are essentially eye-candy props. (Though Yu says she’d heard a rumor that Neela, the Tokyo Drift romantic lead that was played by Peruvian-Australian actor Nathalie Kelley, was originally written as an Asian woman.)

Yu had only two words in the movie. In the now-iconic scene where Sean Boswell (Lucas Black) and Takashi (Brian Tee) race each other for the first time in the parking garage, Yu and fellow import model Aiko Tanaka are the ones that say, “Ready. Set. Go.” That’s it.

“It was so exciting to have a movie with all those Asians, it was a big deal,” she tells me. “[But] I wasn’t a feature, I was just a side character. It just seems like they could have at least made an Asian woman lead in a movie that takes place in Japan.” The movie isn’t perfect and we’ve gotten better since then, but some argue the Fast and Furious movies are what might have been the beginning of the end for the import tuner scene.

The tuner and import scene were not solely Asian, as plenty of people from other races also participated. But after the release of the Fast and Furious movies, it started to shift. Yu says things got mainstreamed, and although it was cool the scene got bigger, the sense of community and empowerment among the Asian community also started to get lost. “When different cultures and trends become mainstream, people forget where it came from,” Yu says.

Modeling is a job. Standing around, looking pretty and posing for photos is work and that deserves dignity and respect. Yu’s job was to pose in front of cars; she’s upfront in saying she didn’t know all that much about the cars (nor did she have to). And yet, some still wrongly assume because Yu—or any other model, for that matter—doesn’t know that much about cars, it also means all women in motorsport are there to be arm candy, unaware of the car scene they occupy.

“I’m talking to some racer TikTokers, girls who actually know about cars, like whose.frs and sheinekasi, and I observed they get a lot of hate still,” Yu says.

But the representation itself is now better than it ever was. “This generation of Asian girls, they have so many girls to look up to,” Yu says. “Asian girls have YouTube stars, actors. You can choose to be anything because there’s at least one [of us] representing it.”

This likely is due, in part, to the fact that most of the women prominent in the import model scene used their success to springboard to other ventures. They became singers, booked other modeling contracts, or worked in entertainment.

Yu certainly enjoyed her time as a model in the early Aughts, even though she didn’t do it for that long. “I don’t regret [my time as an import model]. We traveled all over the world,” she says. “The friends I’ve made from there I’m still friends with today. It really was one of the most memorable periods of my life.”

After her modeling stint, her following moved with her to the then-new Myspace. Eventually, that took her to other career opportunities, such as being the lead singer of an all-Asian girl group, Nylon Pink. These days, she’s a journalist, covering food, culture, and what it means to be Asian. Her work has been published in Vice, Newsweek, Glamour, and elsewhere.

There’s no real singular reason why the whole import tuner scene shrank dramatically. Some blame pop culture, movies like Fast and Furious or games like Need for Speed Underground and Street Racing Syndicate (which Yu was also in) diluting it to the point where it was no longer cool. Some say it was the Great Recession of 2008, emptying the pockets of would-be tuners. Others assert modern cars just aren’t as tinkerable as they used to be.

But one thing’s for sure: the early Aughts aesthetic is making a comeback through Gen Z, giving us a chance to look back through fresh eyes at a glorious import scene that once was and the people like Kaila Yu who lived it. She really is the blueprint.