Home » GM’s Policy on Cannabis Use Partly to Blame for Worker Shortage: UAW GM’s Policy on Cannabis Use Partly to Blame for Worker Shortage: UAW

It’s no secret that buying a car is difficult right now. Between extremely limited parts availability and temporary factory shutdowns, new cars have been hard to come by for months, and used car prices have been sent into orbit. Now, as summer approaches and parts availability is projected to start recovering in the coming months, automakers like General Motors are facing another challenge: worker shortages.

One of the biggest obstacles in hiring new workers, according to the Detroit Free Press, is that they simply aren’t as plentiful as they once were, and those looking for jobs may not fit the optimal worker pool for GM. To make matters even more difficult, many of those who are a good fit either reject the sub-$17 per hour starting wage, or are unable to pass the automaker’s drug test which includes screening for cannabis. 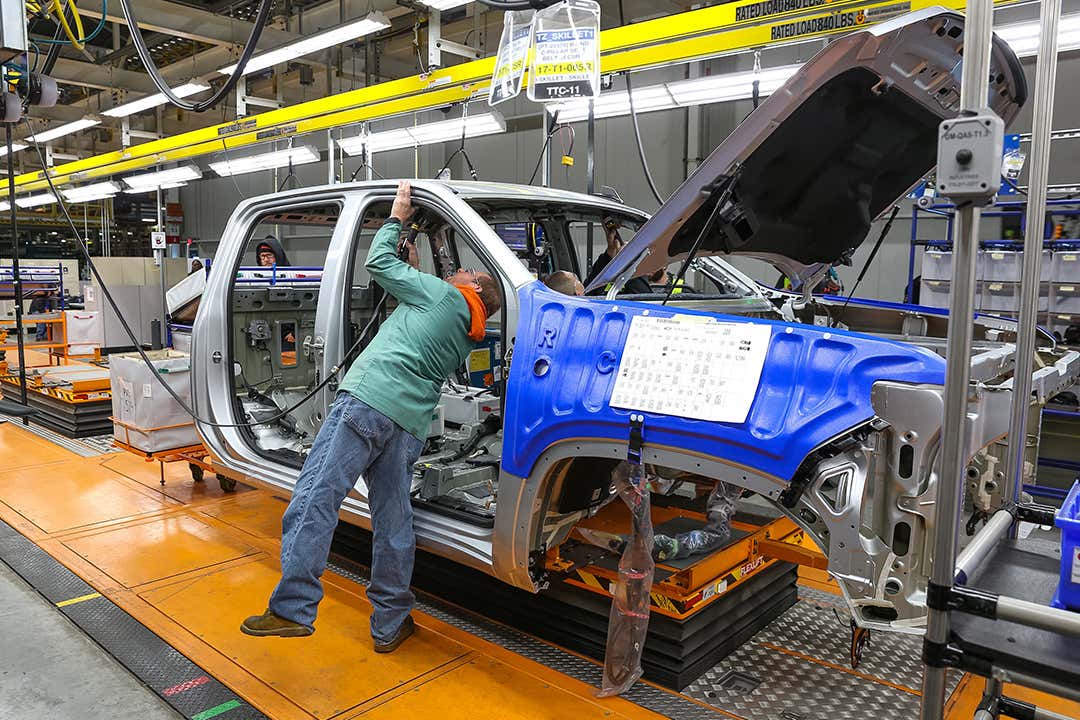 Despite idling the production of various models across its brands, GM’s supply team has done a good job of mitigating the chip shortage’s effects on its top-selling and most profitable vehicles, namely pickups. This meant focusing its efforts on the Flint, Michigan (where pickups like the Chevrolet Silverado HD and GMC Sierra HD are built) and Fort Wayne, Indiana assembly plants.

“Our truck plants have been running around the clock for months because the demand has been so high,” GM spokesman Dan Flores told The Detroit Free Press. “These are seasonal temporary employees that allow people to go on vacation and take time off while keeping the production schedule going.”

With parts becoming available and production capacity increasing, GM is reportedly looking to hire at least 450 part-time employees at Flint, and another 275 at Fort Wayne.

According to United Auto Workers Local 598 Shop Chairman Eric Welter, this has proven to be a challenge.

At the time of writing, GM has 66 open production positions across the country. Staffing agencies have only been sending Welter between 22 and 25 potential employees each week that could fill the open positions. GM has since turned to hiring fairs and other means to attract talent; however, potentially interested laborers are reportedly turning down the opportunity to work at the plant due to the pay rate being too low at $16.67 per hour. Additionally, there’s the odd-hour shifts and the company’s policy on drug testing for cannabis. 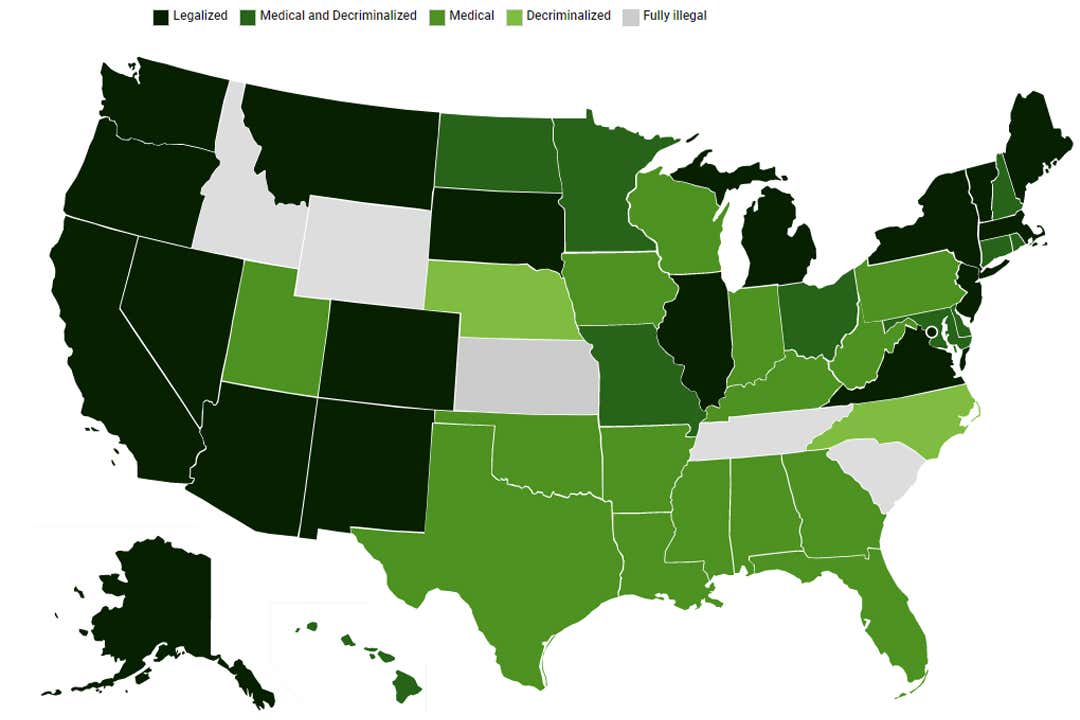 To put the last point into perspective, cannabis is legal in Michigan. In fact, medicinal use has been allowed there since voters helped pass it into law back in 2008, making it the 13th of 36 states that permit the use of the drug for therapeutic or health purposes. Recreational use is also permitted in Michigan, making it one of the 16 states where it’s either decriminalized or outright legal.

GM has five assembly plants in the state of Michigan, plus several propulsion factories, metal centers, and component holding facilities; you’ll also find its sole tooling center and battery assembly location there. Yet the use of cannabis is forbidden for its employees. To make matters more complicated, employee drug screenings are performed on hair specimens, meaning it can trace the use of substances including cannabis for weeks.

Welter says that when potential applicants learn that the test includes cannabis, they simply won’t show up to the interview.

“We’re looking to hire temps like crazy, we just can’t get them,” said Rich LeTourneau, shop chairman at GM’s Fort Wayne Assembly plant, to the Detroit Free Press. “Nobody wants to come to work here.” 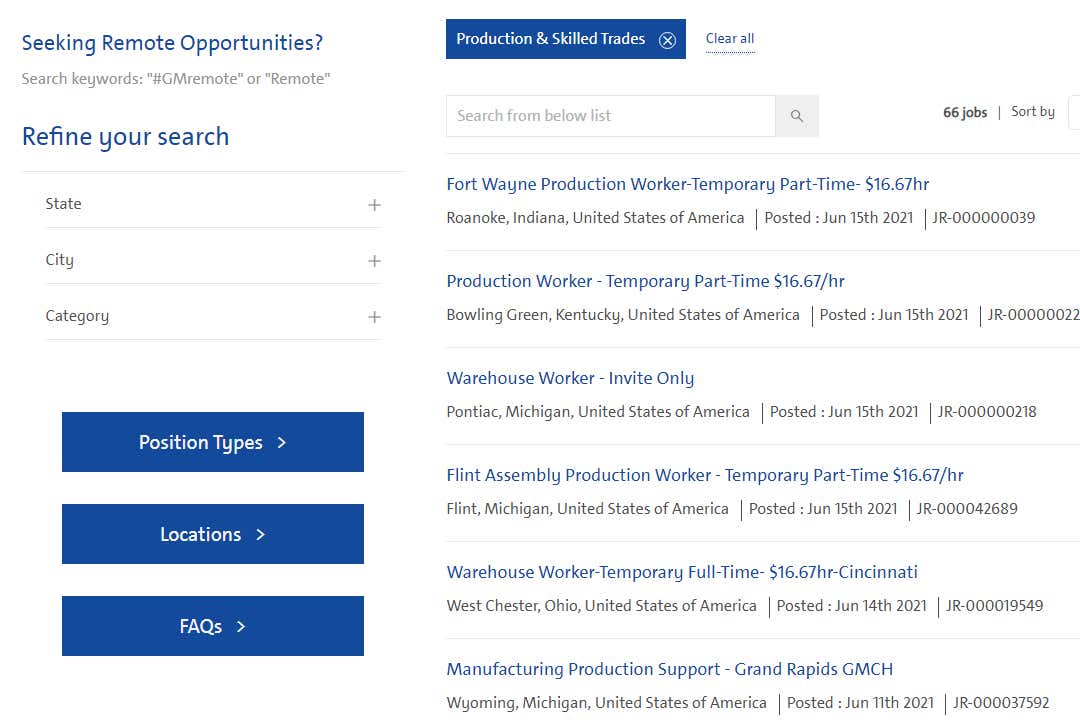 As for GM’s stance on the issue at hand, it’s not as cut-and-dry as you might think. The automaker told The Drive that the Detroit Free Press “misrepresented our position” and that “the issue of marijuana is an issue that is being discussed internally at GM. Beyond that, we have no additional comment.”

LeTourneau says that he also attributes the worker shortage to wages, citing pizza delivery jobs that pay $20 per hour, albeit possibly without comparable benefits. Third party staffing agencies unaffiliated with GM have turned blame towards increased unemployment compensation with equivalent hourly pay being within one dollar of GM’s starting rates.

Regardless of reason, more companies are adopting LeTourneau’s mindset that the employer shouldn’t be responsible for policing substance use, especially in a state where it isn’t criminalized. Even Amazon made a similar announcement earlier this month.

“You’ve got this candidate pool that know they can smoke marijuana in the evening rather than having a drink,” said Welter. “It’s kind of silly to lose good workers. Marijuana doesn’t create the problems that opioids, cocaine and other drugs do.”