Well, I guess it’s just not nails, but I need someone to take the blame for all the punctures and flat tyres.

BHPian TrackDay recently shared this with other BHPians.

Nails. Yes, that is how I would like to start this article. Nails. Those things have been bothering our journeys and caused for the birth of the spare tyre. Back in the day, stray horseshoe nails would be all over the road, which would lead to a puncture. Horses no longer occupy our roads, but yes, the nails are still left behind. Well, I guess it’s just not nails, but I need someone to take the blame for all the punctures and flat tyres. Also is it Tyre or Tire? For British motorists, the rubber wheel-covering is called a tyre, for the Americans, it’s a tire. But on Team-BHP auto correct, it is Tire. Here I am sticking on with Tyre.

Legend says that Fred Flintstone got the first flat tyre and hence invented the spare wheel. Kudos to him.

Enough of all the rubbish and let us get into the actual history. Now a Spare tyre is also called a Stepney.

And just like that people started changing spare wheels! But I bet some folks still don’t know how to change one. Don’t worry, it is easy. Ask Guido. It can be done pretty fast.

Okay. Maybe not everyone can do it that fast. But here is a reasonable one by Scotty Kilmer.

However, soon enough, this thing was taking up place and it was decided to design a space for it. Well. These were the days of the early spare wheels and they added charm and exuded elegance to the car. The era of the civilian Jeep saw the spare wheel basically trying to reach every nook and corner of the vehicle. The spare mounted on the hood looked brilliant on the defenders. Cars of the 70’s also experimented with the positions on the boot.

The CJ era Jeep finally decided to settle on the tailgate mounted style. In my opinion, this led to an era of cool form factor Jeeps that looked macho. Another advantage of the rear tailgate mounted wheel? You can advertise on it or better write on it what you feel. 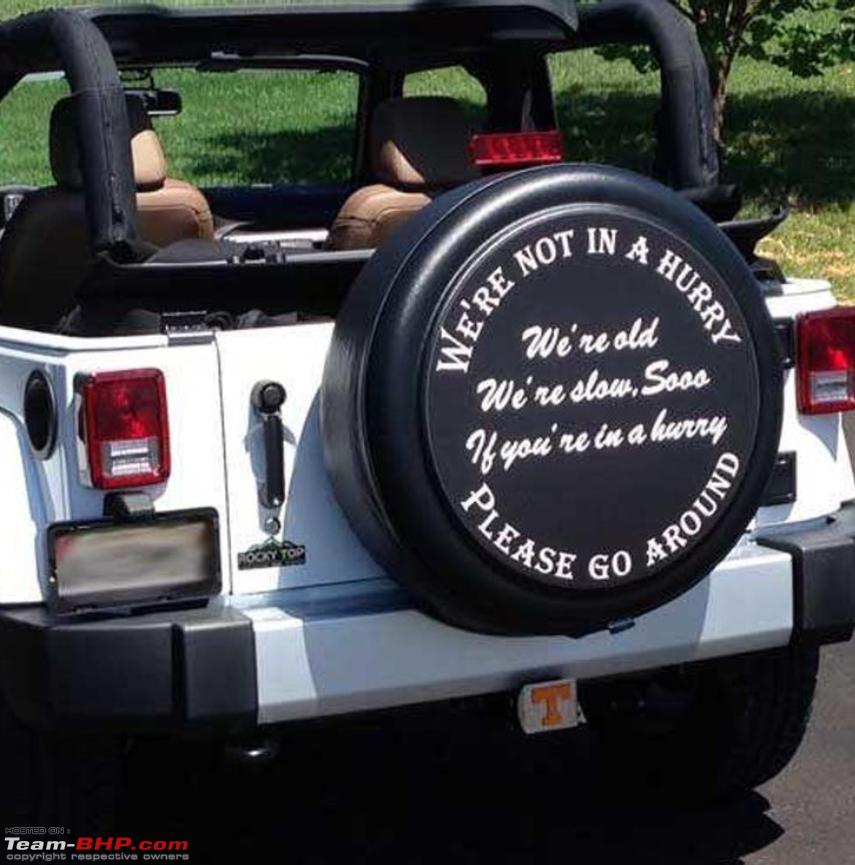 Even recently some were in doubt if the tailgate mounted style was the way to go? So they gave us both options. While some could pull it off, others didn’t impress the audience that much.

Some others gave a swinging arm on which the spare wheel is mounted. To this day, I have no idea why do things this way rather than just mount it on the tailgate? Perhaps design & engineering constraints?

Currently, the SUV spare tyre evolution has reached this stage. Yes, below the boot. Then there is the Trophy Truck Spare tyre setup. I don’t know if that is exactly what it is called, but basically, the spare is mounted in the flat bed area. One can also recall Dom’s charger in the parachute scene from The Fast and Furious 7 having this.

Then there was the era of front mounted wheels which even continues today with the camper lifestyle.

Well, this was a new find for me. Spares in the engine bay! Well if you go back in time, now you know where to find it if you get a flat tyre. Subaru Leone, Renault 14, Fiat Panda, were amongst the ones to do this.

This is most likely the current trend. Wheel well with a spare wheel space saver or better known as a spacer. Frankly, it looks a bit odd.

The BMW and Audi are from Team-BHP itself and belong to BHPians Schoudhury & Santoshbhat.

The only plus side of the spacer wheel? Put four of them in your regular wheel well and voila you have 4 spare tyres. Wait, where do I put the four flat ones? I didn’t think that one through!

How is performance with a spacer?

Even sports cars have an option for spare wheels. At least a spacer I think. How else on earth, can one fit those super fat tyres into the ‘Frunk’. Then you also have the option of eliminating the hero of this story. I am not a fan of where things go from here. As long as cars have wheels, we need spare wheels. This is where things stand today. If there is a spare, this is most likely where it is welcome. In the wheel well (most common) or below the boot portion. If one were to get the puncture kit shown in the previous picture, just get a spare or a spacer and keep it in the boot as shown here in the Q7. It might also be best to have a Tyre Pressure Monitoring System on board so that you don’t land in such a situation. Might also be better for manufacturers to check out something similar along this line? A spare popping out from the bottom? Or is it asking too much?

And some took the spare wheel idea a bit too far.

Then there are some who wouldn’t ever need one. Spare wheels have come a long way from when Fred Flintstone got his first flat tyre fixed. The next generation with EV cars also requires spare wheels. So they are here to stay. Here’s to the future hoping we will have flying cars and hence no longer require spare wheels. Thanks to TrackDay again. Check out BHPian comments for more insights and information.

Demanding George Russell 'not easy to work with' | Planet F1