Inside the Impossible Dream of the Nuclear-Powered 1958 Ford Nucleon

In 1958, Ford showed the world a car like it had never seen before, one powered by a small nuclear reactor. The Ford Nucleon, as it was christened, was envisioned as a car capable of driving more than 5,000 miles between fueling stops, appealing to a postwar fixation with convenience that has dominated American consumerism since. Like some other midcentury nuclear fantasies, though, the Nucleon never came to fruition, in part due to engineering problems we still struggle with to this day.

Before we examine why the Nucleon could never be, let’s get a better grasp of the car itself, starting with its utterly comical dimensions. Ford’s press materials envisaged the Nucleon stretching 200.3 inches long and 77.4 wide, making it as long as the new Ford Maverick compact pickup, but slightly wider. Its roof was said to measure just 41.4 inches high, making it less than an inch taller than the legendarily low-slung Ford GT40. 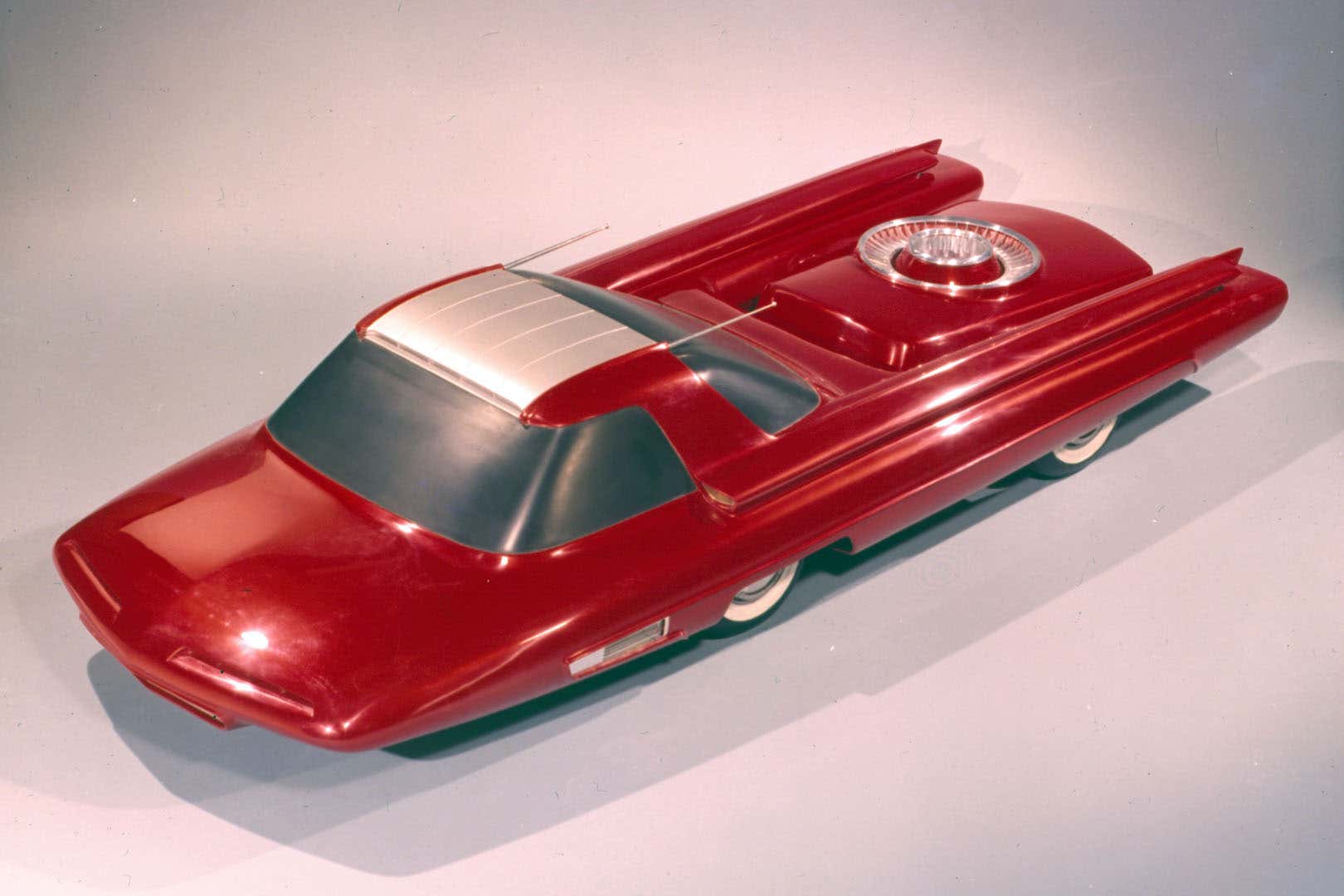 By far its silliest proportion, though, would have been its wheelbase, said to be just 69.4 inches, or almost a foot shorter than the original Mini. Presumably, its wheels were so closely spaced and mounted so far aft to support the weight of its onboard reactor, which pushed the cabin out ahead of the front axle similar to another mid-engined Ford oddity.

Ford called the Nucleon’s reactor a “power capsule,” which it imagined having an easily serviced radioactive core. This would generate power for “electronic torque converters,” presumably an electric motor-generator arrangement like that of a series hybrid. 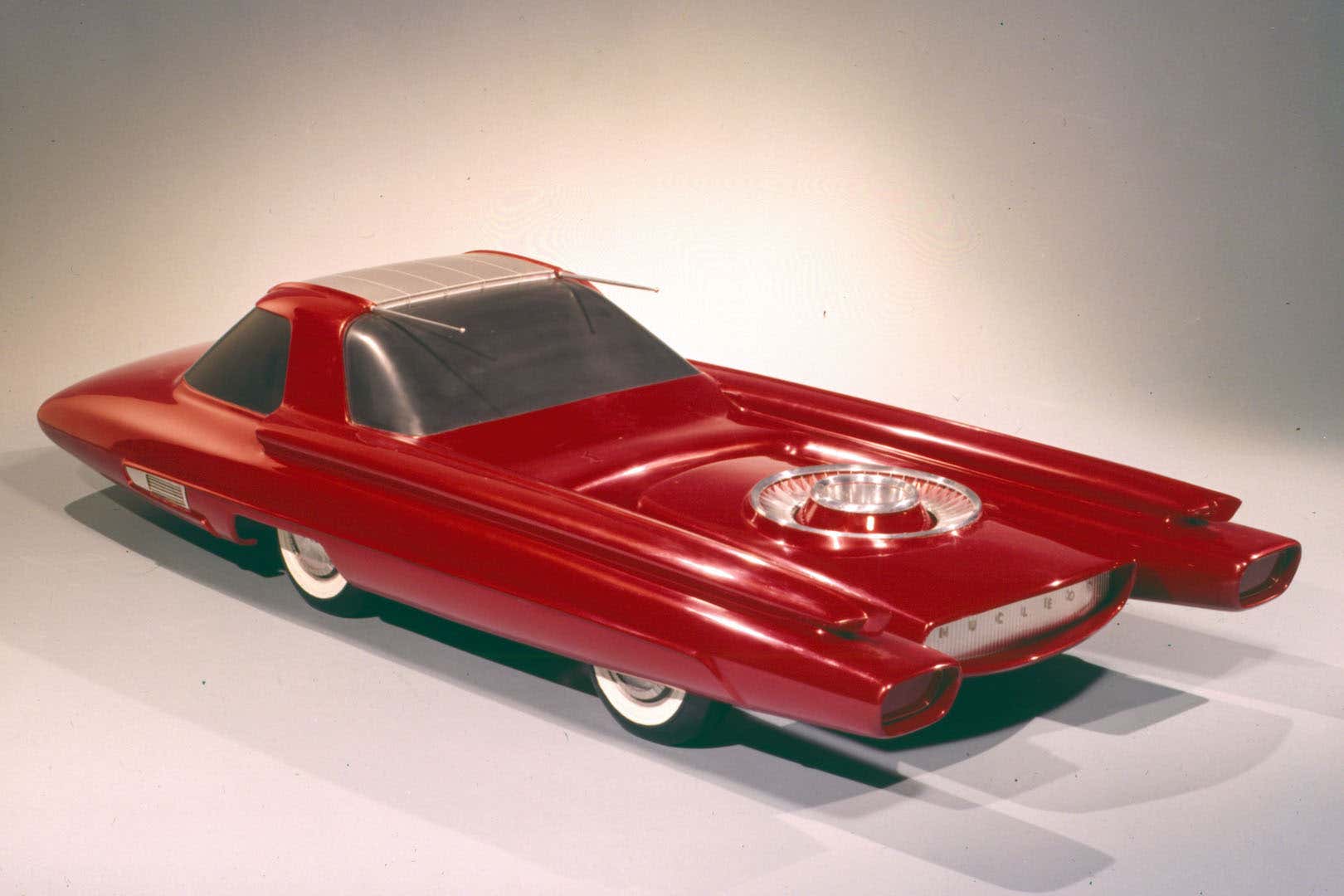 To Americans in 1958, some of whose homes were powered by a nuclear reactor for the first time that year, it must have seemed a matter of time before browline glasses-wearing engineers worked out a way to shrink the technology down to automotive scale. Then, they imagined, cars like the Ford Nucleon could find their ways to dealerships.

But the Ford Nucleon concept all but vanished after 1958, because nuclear energy technology was—and still is—nowhere near ready to power a mass-produced passenger car.

As explained to The Drive by Professor & Eminent Scholar in Systems Engineering Dr. L. Dale Thomas, Deputy Director of the Propulsion Research Center at the University of Alabama in Huntsville, the problem with an automotive-scale reactor isn’t with accommodating the radioactive core, but with handling the energy it releases. 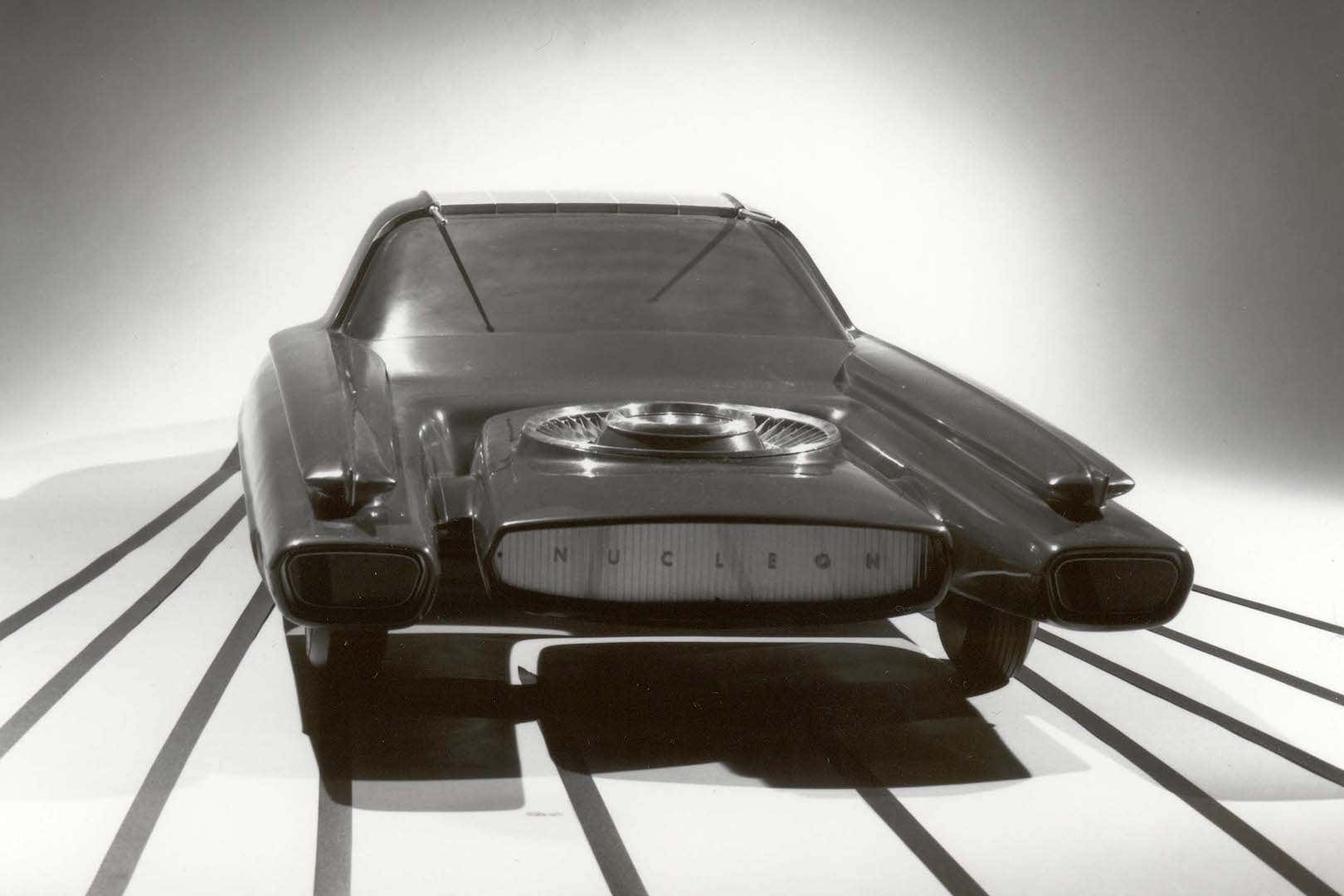 “The reactor core itself (including shielding) for a small nuclear reactor could indeed fit into the engine compartment of a personal vehicle, which would generate ample energy to power a personal vehicle,” Dr. Thomas told us. “However, the difficulty arises from the energy conversion problem. The nuclear reactor will generate thermal energy, which needs to be converted to mechanical energy.”

See, in a car, both an internal combustion engine and a nuclear reactor have the same job, that being to turn thermal energy into mechanical force; into horsepower and torque. Reactors struggle to do this job efficiently, as the heat they generate is often used to boil water into steam, and spin a turbine attached to a generator that produces electricity, in this case for motors powering the wheels. Because this method involves a string of energy conversions, from thermal to mechanical, then electric, and back into mechanical force, it introduces extra inefficiencies.

Even in a simpler system that trades a steam turbine for a simple heat engine, excess thermal energy must still be shed, which a combustion engine does as part of its normal operation.

“For an ICE, much of the waste heat is disposed of via the exhaust gas, and what is left is handled by the radiator,” continued Dr. Thomas. “Since the nuclear reactor’s working fluid is not exhausted, but rather recycled (think of your home or auto air conditioner), the waste heat must be dumped via one or more radiators.”

“It is all these other elements of the system to handle the energy conversion and dispose of waste heat, which present the challenges to use of a nuclear reactor in a personal vehicle.”

For these reasons, nuclear power on the scale of a personal vehicle simply wasn’t possible back in the day, and at any scale of production the likes of Ford entertain today, it still isn’t.

“Mobile nuclear power on such a small scale was not feasible in the ’50s,” Dr. Thomas concluded. “And not due to the small reactor itself, which we do now understand how to construct and control—refer to NASA’s KRUSTY project—but rather the thermal-to-mechanical energy conversion and disposal of waste heat within the geometrical envelope of a personal vehicle. Also, with the Department of Energy’s Small Modular Reactor Program, the nuclear industry is figuring out how to mass-produce nuclear reactors.”

“[Ford] likely optimistically assumed that energy conversion technology would improve significantly (we’re still chasing energy conversion breakthroughs today), and the geometry of the concept vehicle leads me to speculate that they [would have] had a lot of radiators stashed under that sheet metal.” 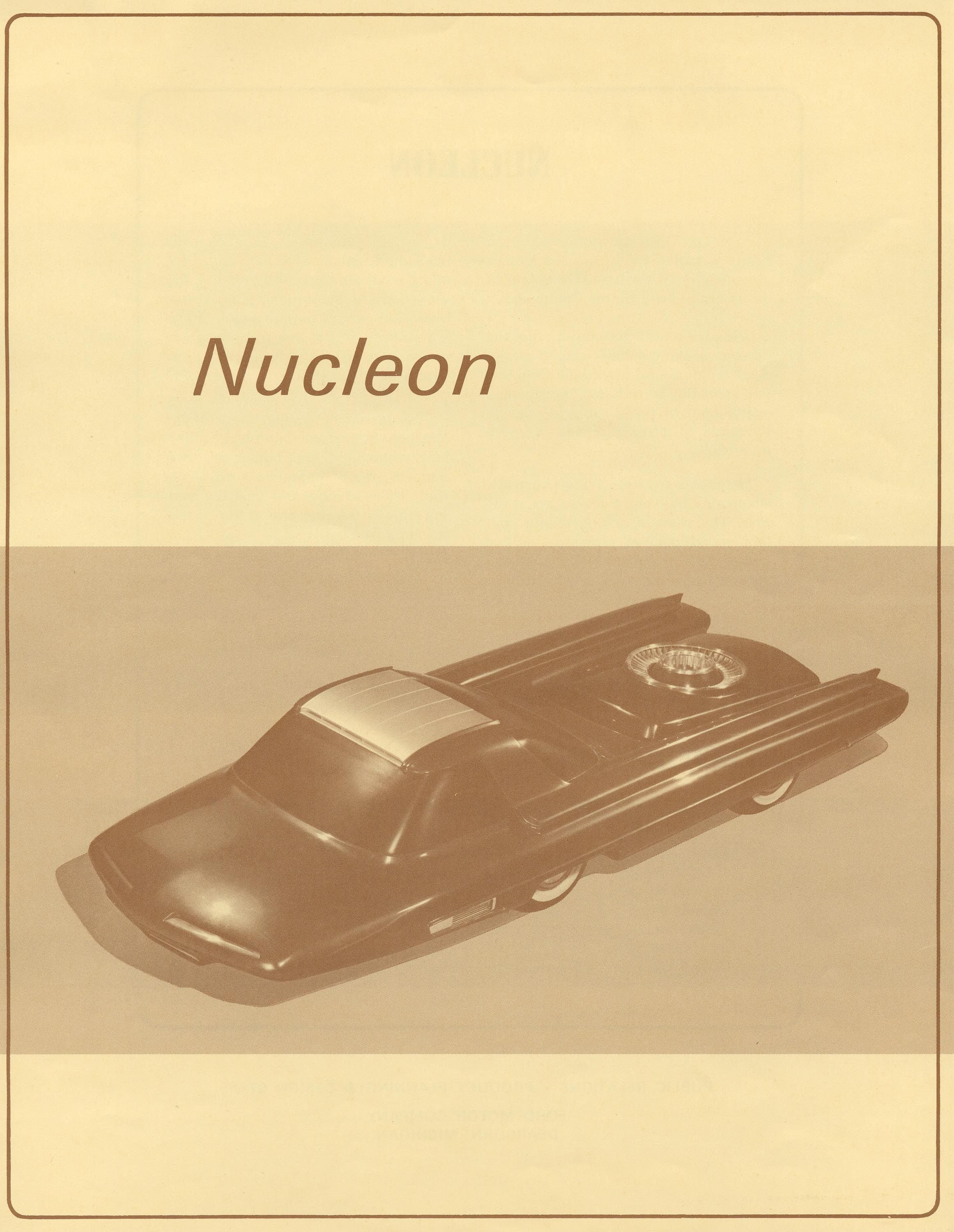 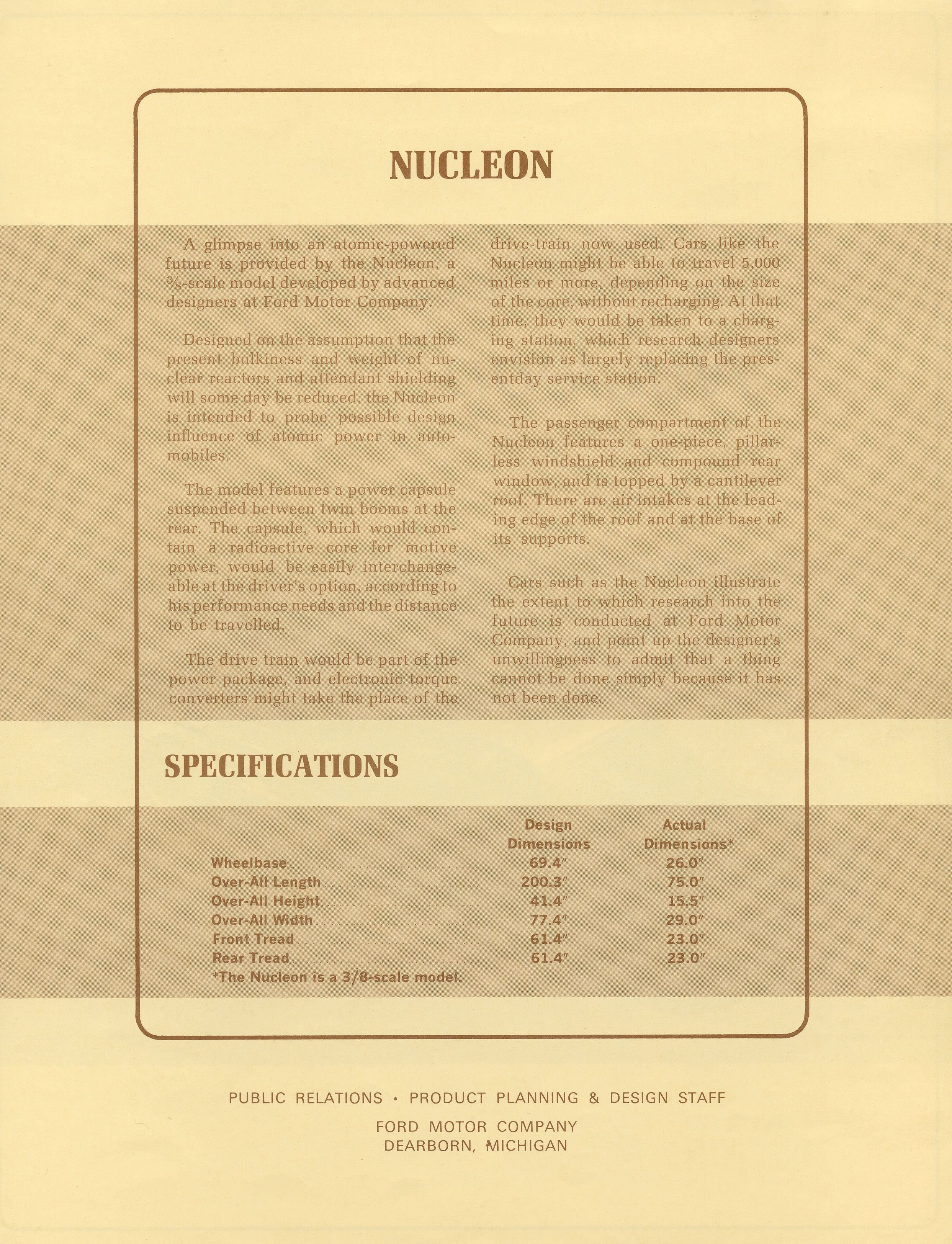 But that sheet metal was never actually stamped out at full scale. A Ford archivist old us the Nucleon only ever existed as three-eighths-scale models, proving that Ford was more concerned with answering the question of how a nuclear-powered car would look rather than how it would work.

It was, after all, just a concept car, one which viewed through the lens of atomic energy-fascinated midcentury America would have seemed reasonable. Of course, concept cars are (usually) designed to appeal not to our senses of pragmatism, but our imaginations, and it’s the latter that makes us look to the future with wonder.