Nissan’s Z cars have built up quite a following over the last five decades as an affordable, enjoyable sports car. The format has always changed over the years, dancing between inline and vee engines and flirting with turbos in the mid 90s. Now, we’re due for a new Z to carry on this storied line, and an example of that very car was just spotted in Miami, Arizona by YouTuber MrFixIt.

Reported by Motor1, The car is camouflaged as you would expect, though the dazzle wrap does little to obscure the lines of the highly anticipated coupe. Interestingly, the wrap makes a line across the middle of the grill, implying that the front bumper may have a bar bisecting the opening in two. However, the grill itself looks otherwise identical to leaked images we’ve seen before, which show no such design feature. Instead, what we’re probably seeing here is the wrap being used to block off airflow to the radiator to help with hot-weather testing; this explanation also rings true given the car was spotted in Arizona in the summer. 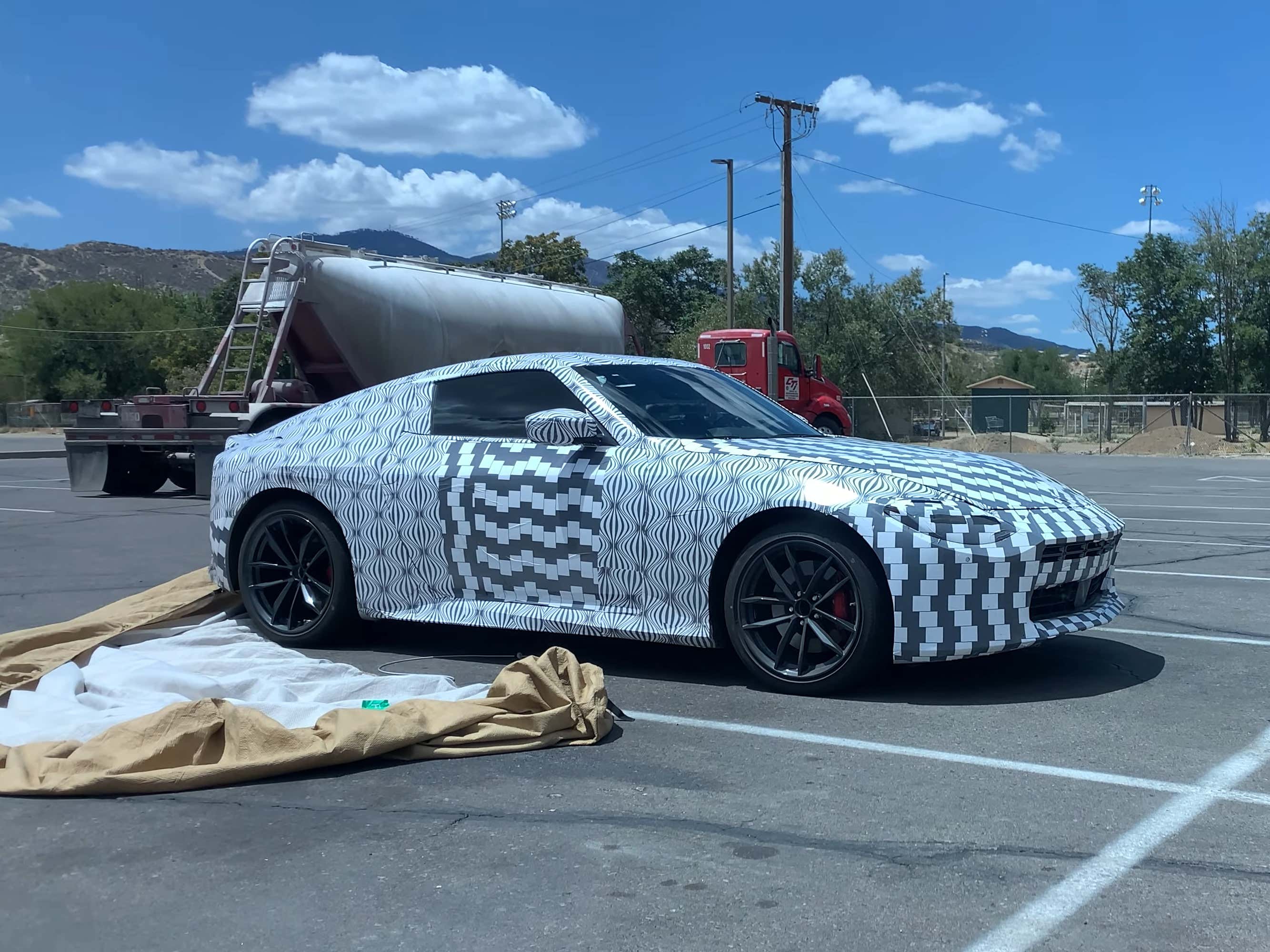 Also of note is that the pictured vehicle sports a ducktail spoiler as per earlier leaked images, something not seen in shots of the yellow Z Proto that Nissan has released thus far. The spoiler is likely to be a stick-on option, given that many owners will want to modify their cars with wings of their own selection. 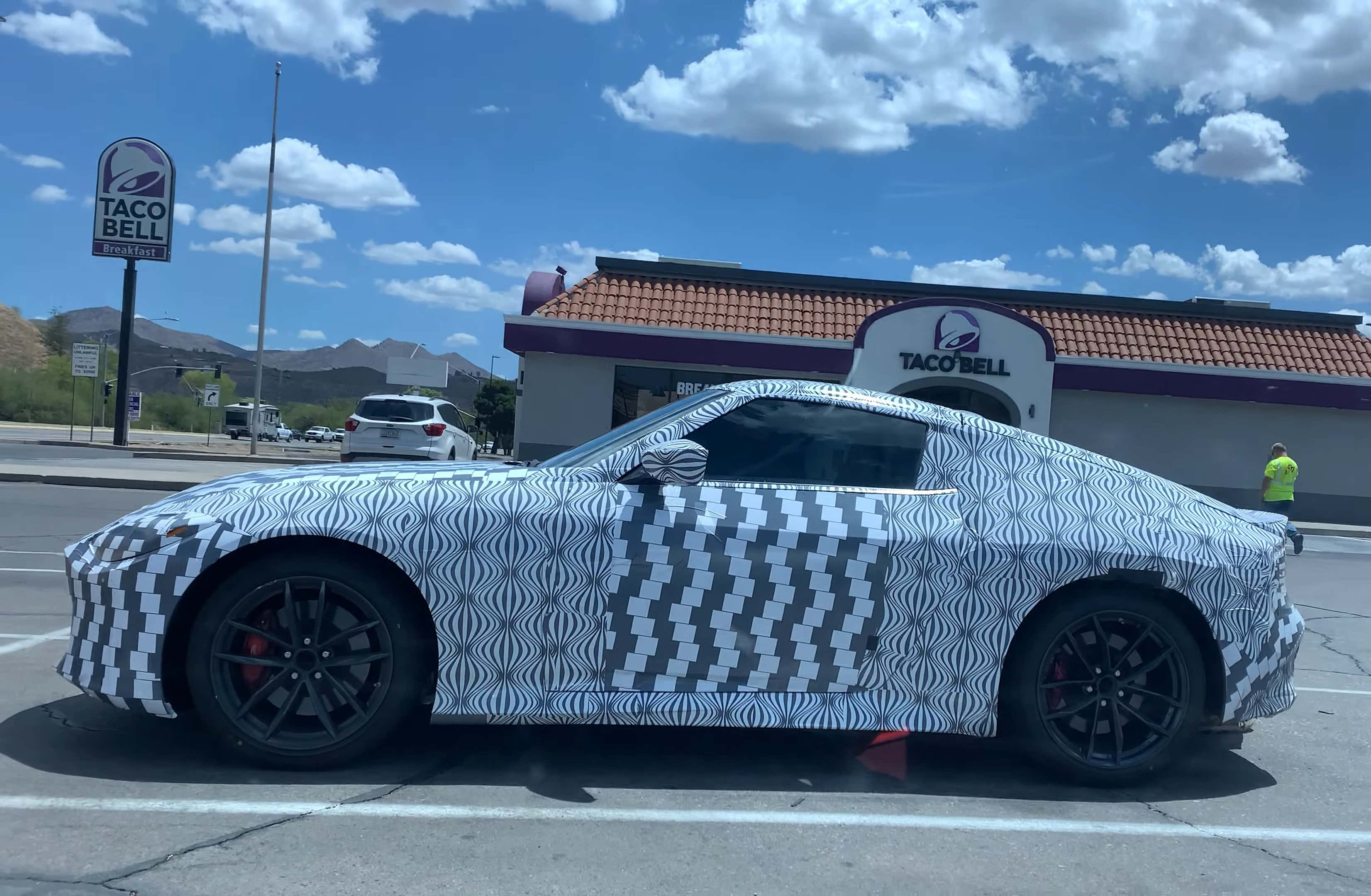 The coupe presents as a squat, lean, well-proportioned sports car, and a worthy successor to the Z name. With that said, the wheels fitted to the vehicle do look a touch undersized for the chosen ride height. Of course, a variety of wheel options would not be surprising at launch, and they’re something many owners will swap out for something aftermarket anyway. If we had it our way, the new Z would come on four space-saver tires to inspire owners to go out and drop coin on a sweet set of deep-dish JDM rims. 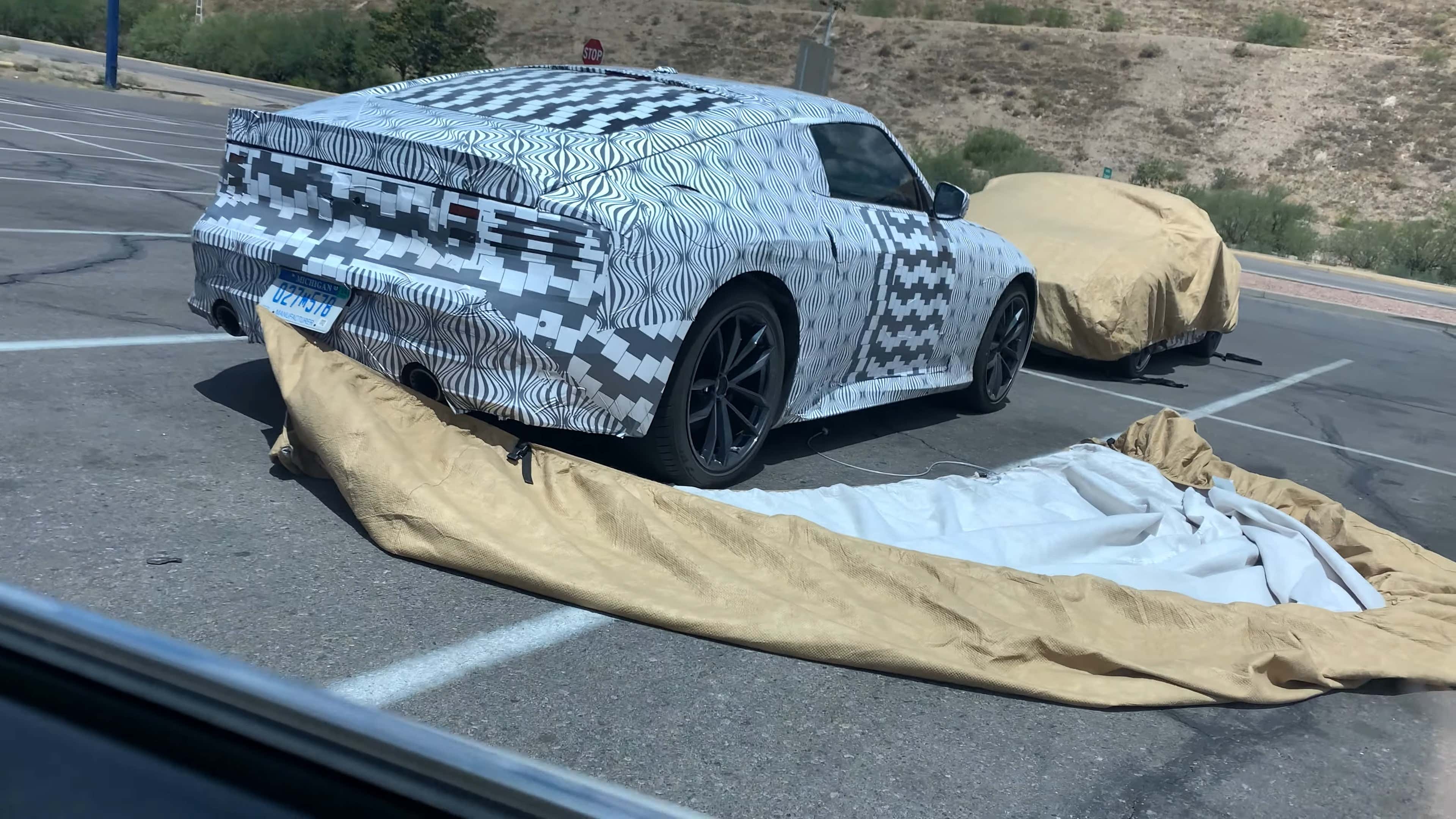 The car cover may have blown off.

Rumor has it that the new Z will ship with a version of the 3.0 liter, twin-turbo V6 already used in the Infiniti Q60. In that application, the VR30DDTT puts out 400 horsepower and 350 pound-feet of torque. Interestingly, however, when the car appeared in Project Cars 3, the video game Nissan Z Proto was listed as having 444 horsepower and a curb weight of 3,252 pounds. While this is hardly a solid confirmation of final specifications, it suggests that the Z may indeed get an uprated version of the existing motor. Nissan’s own site lists the Z Proto as having a manual transmission available as well, so fans of the stick shift have plenty to get excited about.

Our own Peter Holderith got to see the Z Proto in person recently and reported back his findings. Word is that the car is even more handsome in the flesh, though details are still scant as the vehicle on display was very much a prototype.

Excitement for the release of a proper JDM coupe couldn’t be higher, and the new Nissan Z seems to have less detractors than some as it’s not a BMW. Nissan will reveal all on August 17, so stay tuned for more details in the coming months.