This is probably the simplest & best experience of buying a car as there are nos hassles of middle men and there is no haggling. With Tesla, what you see is what you get.

BHPian mobilke008 recently shared this with other enthusiasts.

I have been keeping an eye out in the market to add a second car to our garage ever since I returned the Mazda CX-9 which served us very well. Due to the Pandemic it’s mostly WFH, we don’t really need a second car but, for some reason there was a strong urge since last few months to add an EV to the garage to complete an ICE + EV Garage Portfolio.

I love to drive and do long distances at the drop of a hat. As an example, I have been averaging roughly about 2000 miles per month over the last 5 years (Including my rental car driving that constitutes about 20% of my total driving due to work related travel). During my stint in the east coast, I used to travel almost twice in a month and would always rent a car when the distances were 800 miles or less.

When the thought came to add a second car, multiple “type” of cars cycled through my mind starting from muscle cars (Challenger being my most favorite, Mustang, Camaro etc), rally bred cars (WRX STI, GTI, Focus RS etc) to trucks (fell in love with them when I drove a Dodge Ram).

After driving a BMW, it’s hard to enjoy the above type of cars except maybe the rally bred cars as you are used to a certain luxury, brand and smooth power delivery. I like to look forward in life and not backwards as some of the cars listed above would have been great choices maybe half a decade ago but, not in this age.

With that said, I decided to look forward which meant it has to be a fully electric vehicle and initially, it was a no brainer to get a TESLA. But, I was not too happy with its monopoly and absolute craze and fan following of Tesla owners worldwide.

I was hell-bent to find a competitor who are at least on par and if not similar driving experience as choosing what’s popular or a herd mentality is not my style. I will commit to only something that blows my mind.

Thus, started my journey and I was clear that it has to be a performance oriented EV and keep a strict budget of $60,000 landing price. With that in mind, I shortlisted the following and decided to test drive them in order:

Over the last few months, I test drove all of the above starting with Polestar 2 and Kia EV 6. While both cars are pretty good and there is hard to find fault in them but, they just didn’t feel special or gave a “wow feeling when driven hard despite being powerful cars with 400HP and 325 HP versions.

It was a simple shortlist of choosing a Y or 3. As S and X models are over a hundred grand and is a dream for now. After the model shortlist, next came the variant shortlist.

My single track mind focuses only on performance which unfortunately is the highest end variant costing a bomb.

The EV rebate is discontinued a couple of years ago after Tesla crossed 200,000 units. Either-ways, it is not applicable to their models that cost > $50,000.

I almost decided to cancel the whole plan of buying an EV after getting to know the final landing price as it was ridiculously high.

a) Tesla Model Y which was my initial shortlist costs a whopping $85,000 with all taxes and fees included in WA.

b) Tesla Model 3 Performance costs an equally eye-popping $75,000 with all taxes and fees included in WA.

I was now in a quandary to move forward or completely pause. I decided to take it step-by-step as I was not in a rush to buy anything and decided to do some exhaustive test drive both models.

I started with their most popular (in the current market scenario) Model Y.

Here is the link to my test drive report of a YP that I kept overnight.

I was completely blown by the Tesla Model Y. During this process, I reached out to BHPian Carthick1000 and we had one super long chat and kept in touch via. Text and he was very helpful and patiently answered all my questions that gave me confidence to look at Tesla seriously.

I also spoke to BHPian LexusES350 briefly and being a new owner, he was floored with Tesla Model Y ownership experience and had nothing but positive things to say about his ownership.

Patience is not one of my virtues (lol !!) so within 2-3 test drives of Model YP and speaking to Carthik1000, I went ahead and placed an order for Tesla Model 3 Performance.

Order was placed without even driving the Performance model knowing confidently 2 things for sure:

Being a sedan, It will drive better than a Model Y.

I will save some dough as it will cost me $10,000 less and we already have an SUV so sedan is an appropriate choice. 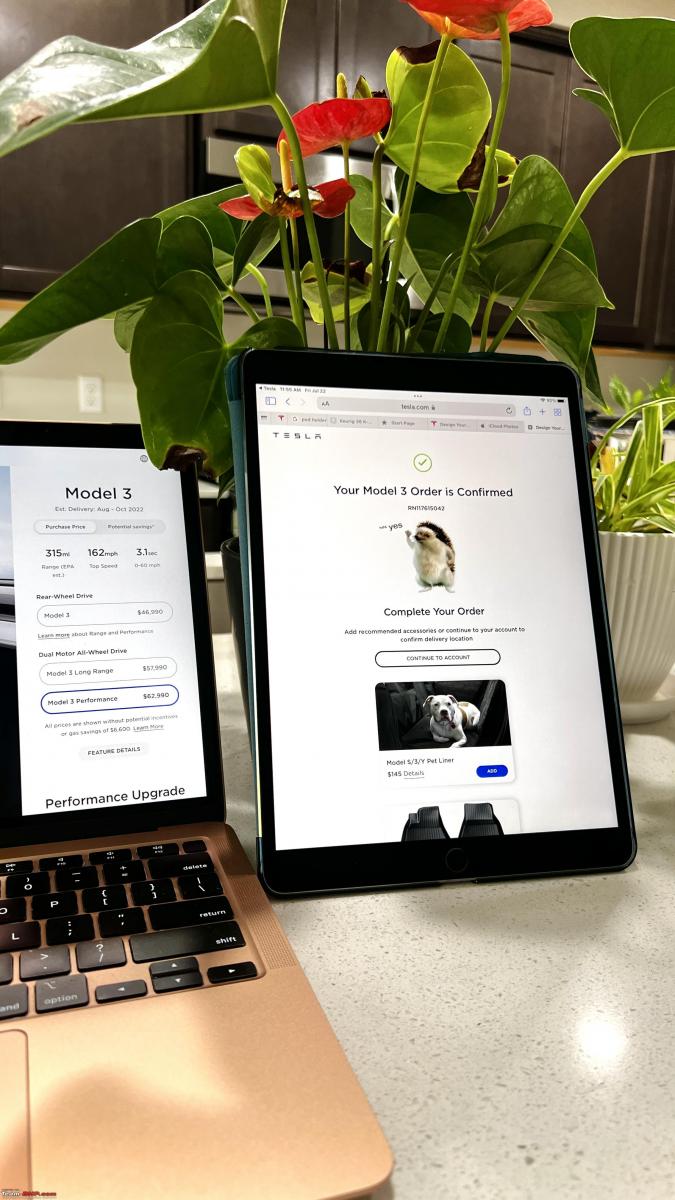 Here is a quick process of “How to Order” a Tesla online.

This is probably the simplest & best experience of buying a car as there are no middle men and there is no haggling (If you ever bought auto in US, you would know the car salesmen are the most notorious for fooling customers in paying a higher price)

With Tesla, no such hassle. What you see is what you get !!!

Visit www.tesla.com and choose the model and place an order by paying a order fee of $250.

It used to be bit complicated until 2022 with respect to the models on offer. Now they made it simple and Tesla Model 3 is offered in 3 different variants. Here is a give break-down of the Tesla Model 3 variants on offer:

There is an interesting “Acceleration Boost” on offer by Tesla for a mere $2000 which can shave off the long range’s acceleration by 0.5 seconds to 3.7 seconds.

M3P 0-60mph is in supercar level at an eye-popping and brain squishing 3.1 seconds.

M3P differentiates itself from its siblings in the following manner:

For an additional 5 grand you get a slightly lower range but, all the above performance goodies so it was a no-brainer for me to choose the M3P. I’m particular about colors. Certain colors are associated with a certain brand. BMW for me is always Blue, Ferrari has to be Red, Lamborghini started it’s journey with Yellow and similarly, for me Tesla has to be Red (Despite, its steep $2000 add-on price just for the color). Other OEM’s charge typically $500 for a color choice. Well, It’s a Tesla and they call the shots. At the next step, you choose the interior color. Black is standard, White comes at $1,000 premium. I saw both colors and have never been a fan of black interiors as it gives me a gloomy feeling. Wish Tesla had more color choices but, I settled for white which looks gorgeous and goes so well with red exteriors.

Once the above is completed, next is to choose the autonomous packages which has been steadily increasing from $8000 to $12,000. However, majority of folks who order a Tesla do not order the Full Self Driving (FSD) as it can be also bought as a monthly subscription of $200/month which can be ordered and cancelled at anytime. It would be useful to get it during long highway trips and then cancel it within the month.

Final screen prompts to choose from 3 different options of purchasing the Tesla.

I would have chosen lease if there was an option to buy it back at end of lease as that is best way to buy a vehicle in US as residual value (Negotiable) at the end of 3-years is already locked on Day 1.

However, Tesla does not allow “Buy-Back” options of their cars at the end of a lease period which is a strategic move by them as Tesla’s are known to hold their value much higher than ICE vehicles. Many folks didn’t know this and opted for lease falling for the lower monthly payments. It was a rude shock for them at the end of lease period when they decided to keep the car.

Thankfully, I got to know about this as there is nowhere it explicitly mentions this and if you aren’t careful then will end up with an expensive mistake. Hence, I chose to finance the car.

Voila!! Your Tesla order is placed. They keep sending you messages and we can check the Tesla App regularly to see the delivery date which unfortunately keeps changing as there is a huge waiting period for most Tesla’s.

Typical wait period of Long Range is 5-6 months which is what 90% of customers order and minority like us who order the performance model get their cars little bit sooner (2-3 months).

As you can see from below screenshots, In last two weeks since I booked the car, I have seen 3 different delivery dates.

Initially it was between August’22 to Sep’22.

With a few weeks, it changed to November’22-December’22

Thankfully it recently got updated to Sep 11th-Oct 16th, 2022 and keeping fingers crossed it should be delivered by end of September’2022. Since I have lot of time on hand waiting for the M3P to arrive. I decided to test drive the car and it impressed me lot more than the Tesla Model Y and it gave me a satisfaction that my blind leap of faith was not entirely in the wrong direction. Here is the report of my M3P Test Drive experience.

I am excited and counting the days to start my EV journey with our new Tesla Model 3 Performance. Driving a Safari after covering 20K km in my XUV700: What’s it like