We go peak to peak in the new MINI Clubman John Cooper Works 306hp. With some MINI-mad PHers in tow 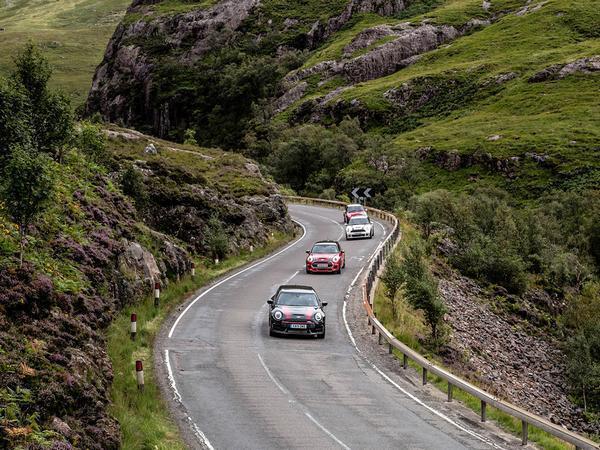 “Because it’s there” is all the justification required for a truly great road trip. Or, in the case of the highest mountains in Scotland, England and Wales, “because they’re linked by some amazing roads” and inspire a very PistonHeads take on the Three Peaks Challenge. The tool for the job is the MINI Clubman John Cooper Works 306hp – the most powerful production MINI ever and the brand’s new contender in the 300hp hot hatch club.

For outdoorsy types the real challenge is to bag all three summits on foot within a 24-hour period. We’re not averse to a bit of rambling here on PistonHeads but we tend to prefer our adventures at the wheel. Dig out your red socks and fill your boots if you fancy it, though – the driving route is pretty much the same either way! And the best part of 500 miles on some of the UK’s best roads is the kind of Dream Drive we can all enjoy, with or without the mountaineering.

With the car and route sorted we need some suitably like-minded companions for the complete road trip experience. And who better than three MINI-mad PHers, all with JCWs of their own to help us explore the brand’s high-performance heritage. 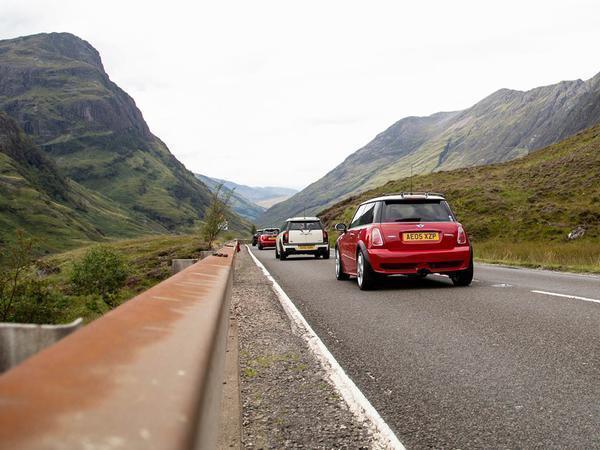 At our meeting point in Fort William we’re joined for starters by Chris Szafranek and his immaculate first-generation JCW. A serial car nut, Chris’s first car was a Clubman 1275GT he never actually got to drive, his dad recognising a rusty money pit when he saw one and intervening before he took delivery. His car buying skills have improved and since then he’s enjoyed all manner of hot hatches and PH-worthy performance cars, MINI ownership happening ‘accidentally’ after he had an argument with his wife and spent the money they’d set aside for a caravan on a JCW instead. Which sounds like about the most PistonHeads incident ever, Chris thankfully back on speaking terms with his better half and his MINI a keeper. Win-win.

Representing the second-generation JCW is Mike Fleming from Aberdeen and his immaculate Clubman. Mike’s had several MINIs, including a current generation Cooper. The novelty value of the Clubman JCW was a real draw though, its rarity and distinctive looks too good to pass up.

Spot the recurring theme but our third PHer Ian_C_UK’s car history has also taken him via all sorts of hot hatches and performance cars and into the driving seat of a MINI. Why a JCW? It doesn’t matter if he’s had a hard day in the office – his MINI puts a big smile on his face as soon as he gets behind the wheel. 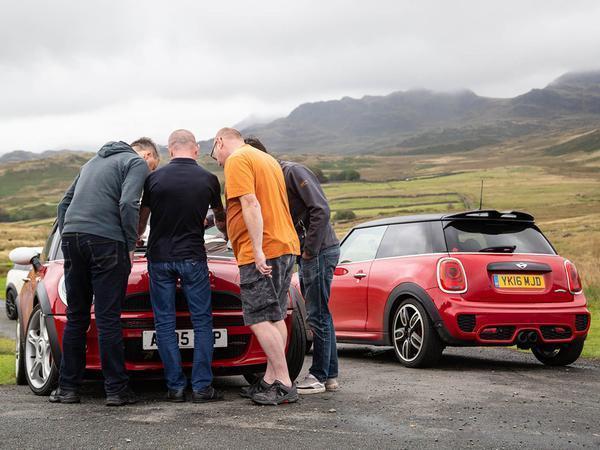 Our journey starts the way most ascents of Ben Nevis would do – on the twisty little rollercoaster of a road up Glen Nevis, the exhaust on Chris’s riotous little R53 likely audible to those on their way to the 1,345m summit. We’ve got miles to cover in the other direction though and, with Ben Nevis in our mirrors, we enjoy a most MINI-worthy appetiser of undulating, single-track fun before hitting the A82 through Glencoe.

Epic is a much over-used superlative but if the scenery along this road doesn’t leave you open-mouthed someone needs to check for a pulse. We’re there as the summer holiday season is drawing to a close and, by mid-morning, it’s getting busy with camper vans, tour buses and sightseers. Power and traction are handy for overtaking slow-moving traffic, strong brakes ditto to avoid the selfie-stick wielding tourists wandering in the road. Thankfully the Clubman JCW is covered on all bases, the 2.0-litre TwinPower turbocharged engine, eight-speed Steptronic automatic gearbox and ALL4 all-wheel drive delivering instant punch while the uprated JCW-branded calipers provide reassuring stopping power.

Our distinctive little convoy is turning nearly as many heads as the scenery, the new Clubman taking the lead with each generation of JCW in ascending age order behind. Chris’s R53 may be at the back but he’s not struggling to keep up, the sight of three hard-charging MINIs in the mirrors adding to the fun. 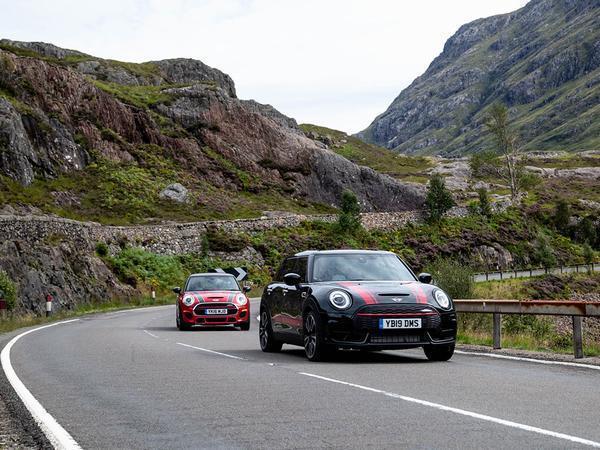 The twisty road alongside Loch Lomond throws in some freshly wetted surfaces, the reassurance of ALL4 and the new limited-slip diff on the front axle putting the JCW’s power down regardless of the weather. Which, in true Scottish fashion, goes from one extreme to another every 15 minutes or so.

Having survived Glasgow’s rush hour the convoy regroups on the motorway south. Chilling out in Green mode saves some fuel while the optional Harman Kardon sound system blasts out the tunes via Apple CarPlay on the upgraded Navigation Plus Pack infotainment system. We’re on a schedule but all along this route there are additional Dream Drives to explore if you have the time, be that the ‘Kinlochring’ near the start at Fort William, a drive across the Trossachs and Campbeltown peninsula from Loch Lomond, or east into the borders and the great roads towards Selkirk and St Mary’s Loch.

We’ve got miles to make up if we’re to reach the Lake District in time though, a last blast along the twisty A595 the perfect appetiser to a delicious curry in Cockermouth. Suitably refuelled we rise early the next morning to travel to Wasdale Head and salute England’s highest mountain. At 978m, Scafell Pike gives up a little height to its Scottish and Welsh equivalents but three peaks aficionados rate it as one of the more challenging to climb. The summit is hidden in the clouds but the scenery is still awe-inspiring, the narrow road alongside Wast Water another perfect test for our MINIs. 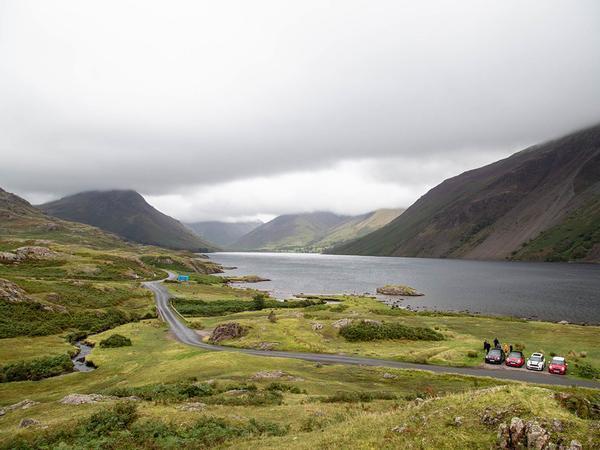 The singletrack lane over Ulpha Fell is narrow and twisty but well-sighted enough to enjoy the JCW’s talents, the Clubman’s all-wheel drive traction a huge benefit on wet and bumpy roads like these. Skirting Kendal, we stop for ice creams on Morecombe’s blustery promenade before jumping back in our MINIs for the final push to North Wales.

Another motorway section is a chance to mooch and enjoy the Clubman’s well-appointed interior and ConnectedDrive navigation, the optional head-up display guiding us smoothly around Manchester and Chester to Denbigh and the open roads that lead to our overnight stop in Betws-y-Coed. Average speed cameras on one popular stretch might seem a boot-cooling fun killer but, in fact, it turns the road into an impromptu regularity run, stunning views over Snowdonia whetting the appetite for the final day’s driving.

Llanberis Pass runs in the shadow of Snowdon, the tallest mountain in Wales and a popular tourist trap. It’s spectacular but busy, the flowing roads towards Bala offering plenty of quieter options while the run down to Bethesda via Llyn Ogwen delivers a thrilling final blast to our last night’s stop in Bangor. It’s been a hell of a trip and a fantastic opportunity to explore how this new JCW takes the spirit of the previous versions, turns up the wick and delivers a MINI experience packed with raw power, style and sophistication in equal measure.

To find out more about the Mini Clubman JCW 306hp, and to book a test drive, click here. 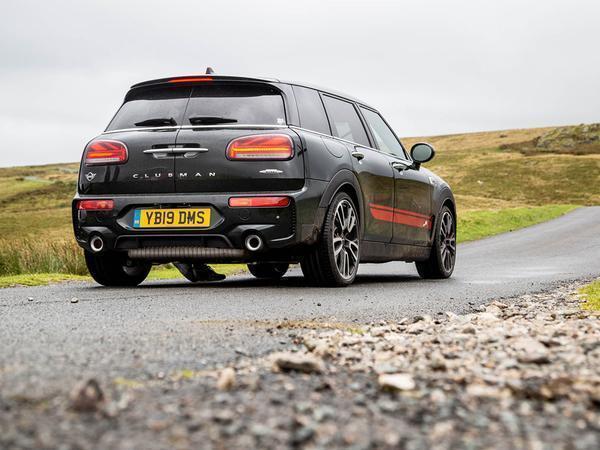 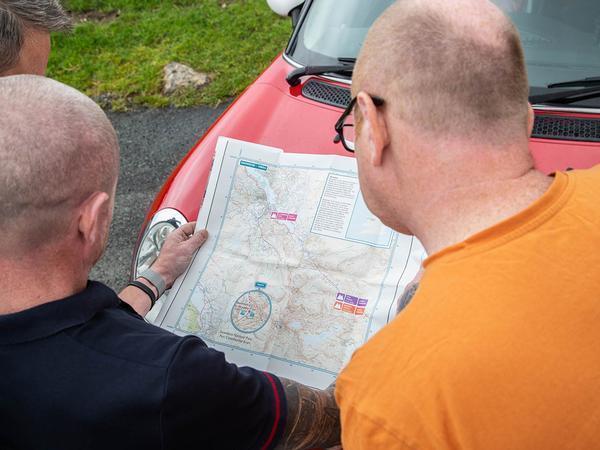 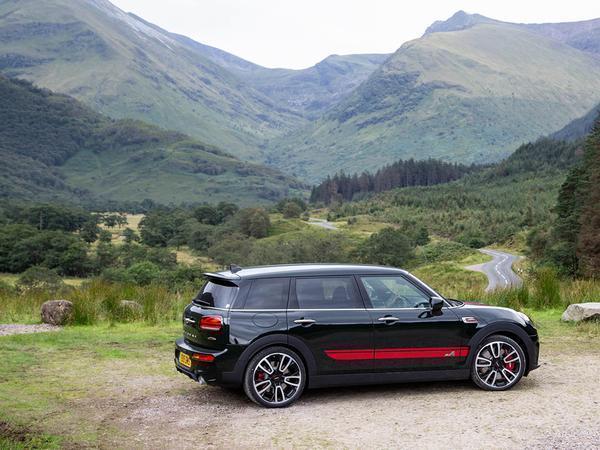 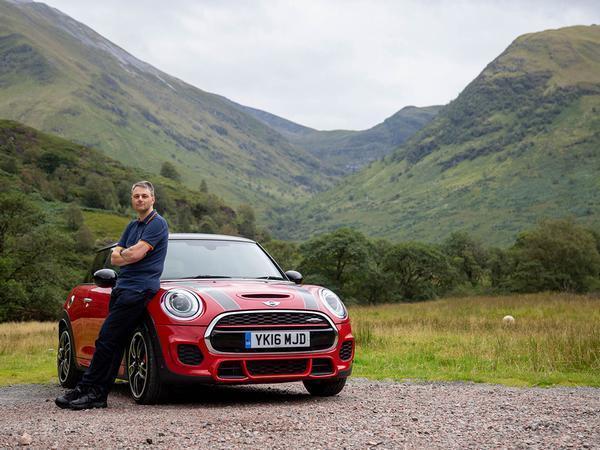 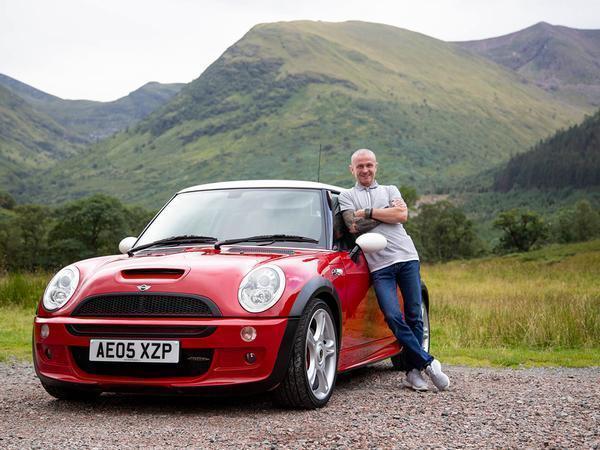 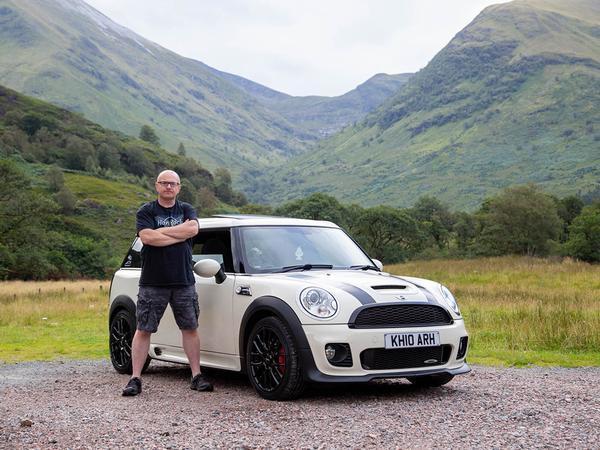 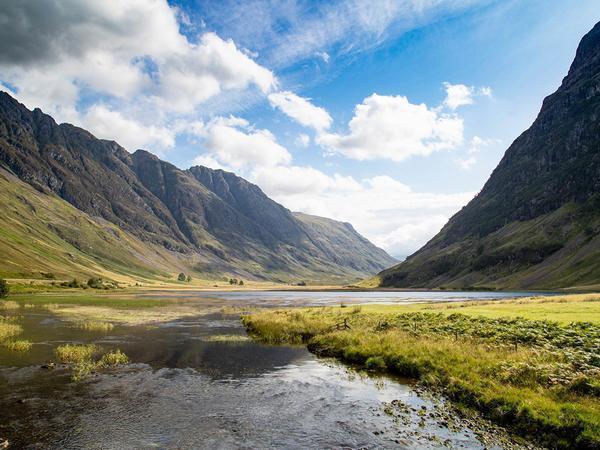 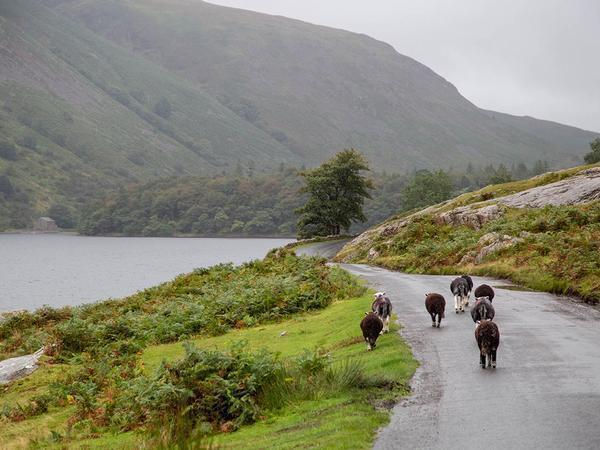 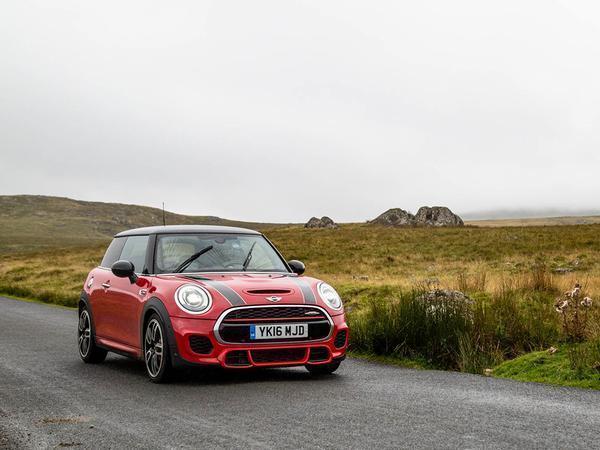 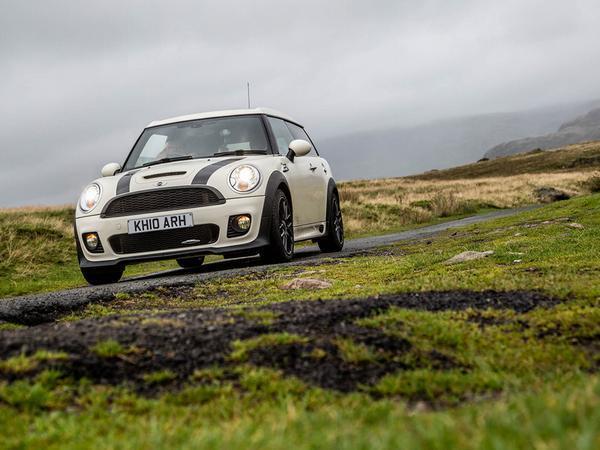 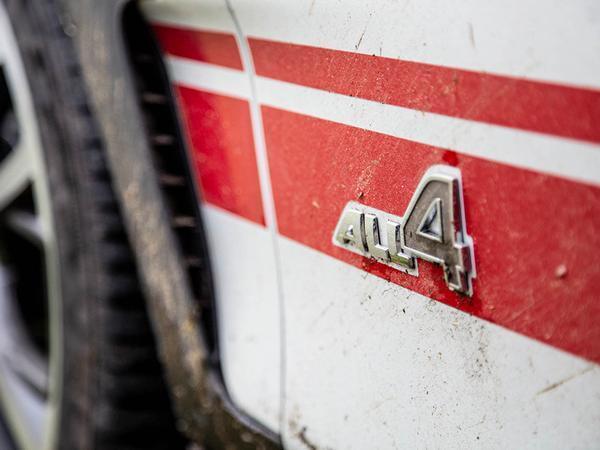 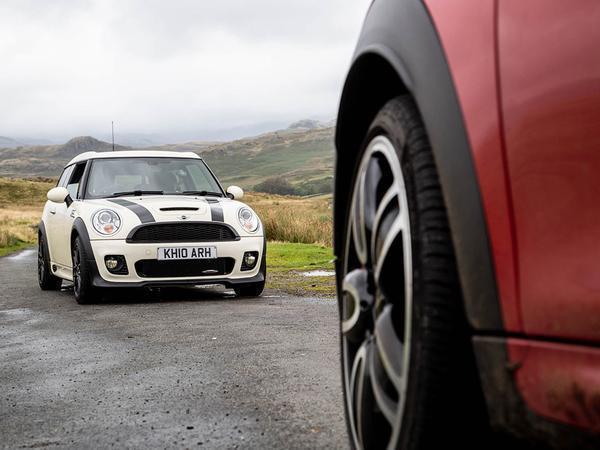