If you can keep track of all the model variants of Porsche Panameras, well, good for you. A look at the Porsche consumer site shows there are 32 of them right now divided up into hybrids and non-hybrids, in sedan, Executive and Sport Turismo body styles. Is that enough Panameras? No! Porsche is adding or improving a few for the 2021 model year.

The cavalcade will be lead by a 689-hp flagship Turbo S E-Hybrid, which is not only the most powerful Panamera in the lineup, but the second-most-powerful model Porsche currently sells (after the 750-hp Taycan Turbo S). The Turbo S E-Hybrid combines a 563-hp 4.0-liter twin-turbo V8 with a 134-hp, 295-lb ft electric motor. Included in that powertrain is a 17.9-kWh battery that is not only bigger than the battery found in the old Mitsubishi iMiEV, but is 27 percent more energy dense than before. The old battery was 14.1 kWh.

Porsche points out that the four-liter twin-turbo V8’s 563 hp tops the 2020-model’s 550 hp. The new Panamera Turbo S E-Hybrid in sedan and Sport Turismo body styles accelerate from 0-60 in 3.0 seconds, while the Executive body style takes an extra tenth of a second to get there. All three are 0.2 seconds faster than before. The Turbo S E-Hybrid sedan and Sport Turismo also offer the quickest acceleration from 0 to 124 mph of any 2021 Panamera at 10.9 seconds. A top track speed of 196 mph for these flagship variants represents an improvement of four mph compared to the 2020 Panamera Turbo S E-Hybrid models. 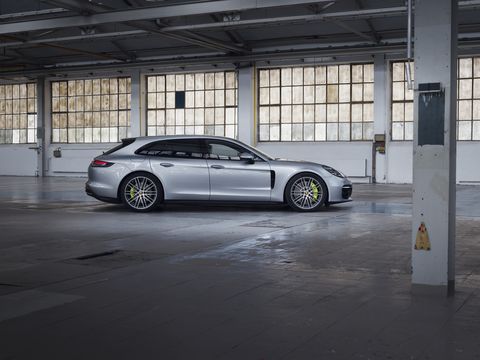 The Panamera 4S E-Hybrid makes a total of 552 hp. That’s E-Hybrid number 3. Porsche says it is expanding its E-Performance strategy by offering three Panamera plug-in hybrid models for the first time in 2021 – each available in sedan, Executive (long-wheelbase version) and Sport Turismo. Each one gets that 134-hp, 295-lb ft electric motor integrated into its eight-speed dual-clutch transmission.

Porsche says chassis and control systems have been tuned for “a compelling balance between agility and comfort” on all the new Panameras. There’s a new generation of steering control calibration, as well as new tires to improve lateral dynamics and offer “greater handling precision.” The flagship model Panamera Turbo S E-Hybrid comes standard with all currently available chassis and control systems such as the Porsche Dynamic Chassis Control Sport (PDCC Sport) electric roll stabilization system, which includes Porsche Torque Vectoring Plus (PTV Plus), as well as rear axle steering with Power Steering Plus as well as the Porsche Ceramic Composite Brake (PCCB) system. 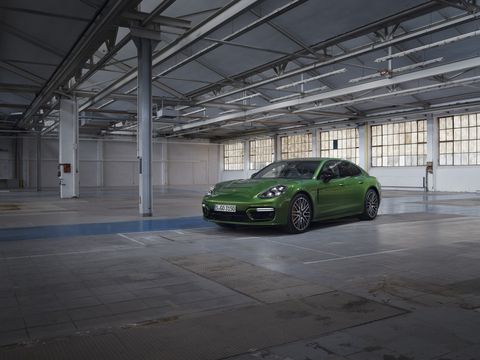 The new 4S benefits from all the optimized features introduced on other 2021 Panamera models, and is equipped with the “Sport Design” front end as standard. This features “striking” air intake grilles and large side cooling air openings as well as a single-bar front light layout.

Prices will be announced closer to the new cars’ launches in spring 2021. Start saving now.

The newly designed front end of the Panamera Turbo S E-Hybrid, meanwhile, is differentiated by its dual C-shaped Turbo front light modules as well as its larger side air intakes. The revamped light bar at the rear now runs seamlessly over the luggage compartment lid with an adapted contour.

Interior improvements include higher display resolution on the Porsche Communication Management screen, along with additional digital functions and services.

2021 Kia K5 Races Itself Because The BMW 330i Is Too Slow, Ad Claims
Car Reviews