You may not have heard about REE Automotive unless you’ve been following electric cars for a while, but a recent development should make the company more of a household name, at least in EV households. The e-mobility company—fresh off a $500 million funding round earlier this year and Nasdaq listing days ago—plans to open a US headquarters in Austin, Texas, in addition to an assembly site.

Based in Tel-Aviv, Israel, REE Automotive has managed to stay out of consumer-facing EV news because its tech has mostly been aimed at other manufacturers, with its role centered on that of a developer and supplier. Its scheduled establishment of a US foothold should bring it more publicity, landing in a city that is rapidly becoming an EV tech hub.

In the EV industry and start-up world, REE is arguably best known for skateboard platforms, with the company’s calling card being the industry’s flattest EV platform. Dubbed REEcorner, the platform packs the powertrain, steering, suspension and braking components into the arch of the wheel, offering other automakers a ready architecture on which many different types of vehicle bodies can be fitted. The compact module between the chassis and the wheel, therefore, is designed to be scalable and modular—what the company calls “agnostic” to the design and size of the final vehicle.

The planned Austin facility will include an integration center, the company says, that will offer REE’s technology to future and current partners in North America, including Magna International, allowing for the construction of prototypes. 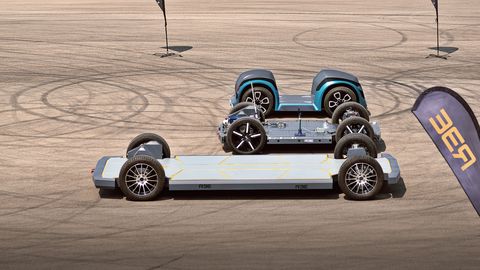 REE is far from the only EV developer focusing on skateboard platforms, as Bollinger has designed its own EV platform to also be used by other automakers, in addition to trucks of its own design. Another has been developed by the Watt Electric Vehicle Company in the UK, aimed at low-volume manufacturers. The real promise of scale for skateboard platforms, however, comes with large orders from logistics giants, who can fit custom-designed bodies to the platforms.

In a way, the concept of one manufacturer building the platforms and another building the bodies dates back to the early age of the automobile, when buyers would buy a chassis from an automaker and then commission a coachbuilder to build a body to order. In modern times we’re far more likely to see mass manufacture on skateboard EV platforms, but the two-builders approach would remain unchanged.

“REE’s Integration Centers will be designed to be fully modular and scalable to ensure the Company achieves projected production volumes,” says Michael Charlton, REE’s COO. “The state-of-the-art centers will utilize automation, including Automated Guided Vehicles (AGVs), for the optimal movement of assemblies, with the goal of increasing automation levels to Industry 4.0 Technology and beyond.”