He already had an M800 & cars like the Padmini, Ambassador, 118NE & Contessa had become too old.

BHPian Sanidhya mukund recently shared this with other enthusiasts.

For the restoration of this car, I would like to sincerely thank:

The Indian car market has always been unique. In its initial days, it was characterised by imported cars or CKD cars, most of which were owned by the colonial rulers or very affluent Indians. Post attaining independence, it was marked by the presence of 4 homegrown manufacturers who assembled products that were licensed from foreign players. These manufacturers defined the market for nearly three decades and presented a decent range of models including a rufty tufty 4×4 (The early Mahindras), a stylish 2 door convertible/coupe (Standard Herald), a battery of sedans (Padmini, Ambassador, Gazel) and even a few interesting customisation options (Drive away chassis that could be coach-built). Those who were extremely rich could even import other cars of their choice by paying the prohibitively high import duties, but for the relatively less rich, these 4 manufacturers were the only options available.

Which is why, a street scene from the 60s or 70s was one that was liberally dotted with these cars in addition to the various imports. However, by the late 70s, these models had started to show their age. Build quality was not strong either; it would not be surprising for Ambys to require welding right from the showroom or for Padminis to have their trims falling apart. Most cars were driven down to their respective dealerships, some of them not very carefully. Misaligned body panels, quality control issues, road trips that required one to carry along spare parts and waiting periods of 5-6 years were all dealt with as ordinary happenings. However, the advent of Maruti Suzuki changed all that. Here was a car that was not only affordable but was also modern, reliable and built to high standards in a robot equipped factory in a systematic manner. For the first time, India’s common man had access to cars that didn’t need much more than a tank of fuel and some basic checks to travel from Arunachal Pradesh to Gujarat without breaking down! The naysayers criticised them left, right and centre, but in the long run, these pint-sized cars proved what they were made of.

This high volume game with low-profit margins was one in which the oldies could not participate; they just did not have the R and D capability or the resources to develop a rival to the hugely popular Maruti trio. They decided to step into the ‘luxury segments’, the segment which was intended to fill the void between the imported cars and the locally built budget cars. HM started building the Vauxhall Victor as the HM Contessa, Premier started building the Fiat-124 as the 118NE and Standard introduced the Rover SD1 as the Standard-2000. All these cars were still much older than the Marutis, but not as old as the Ambassador and the Padmini. They managed to sell in decent numbers and did become status symbols of the mid-80s. However, by 1989, Maruti was ready to crash this party. Up their sleeve was a new arrow-shaped car that looked like nothing that had been produced and sold in India before. A modern looking three-box sedan with the only intention of winning over the ‘Luxury car’ segment of India, in came the Maruti-1000 in 1990 and drove straight into everyone’s hearts. It immediately became a very desirable car and a status symbol. However, as modern as it looked, it came with a gutless engine that could not even bear the load of the Aircon! Still, since the other cars in the market were not exactly tarmac burning BMW M5s, Maruti was able to get away with it.

Then, in 1991, the Government of India announced a policy that changed the face of the Indian car market forever – The liberalisation policy. Suddenly, there was a lot of new competition coming in – From South Korea, Daewoo and Hyundai. From Germany, Opel. From France, Peugeot. From the US of A, Ford. Even on the domestic front, Tata Motors was making serious efforts to build passenger cars with their feature-packed and stylish Sierra and Estate. Feeling the heat of the present and upcoming competition, in 1994, Maruti Udyog decided to up their flagship game by plonking in a larger, 65 BHP 1.3-litre motor into the 1000 and named it Esteem, a name that soon became a household entity in India. In its early days, the Esteem did not have any variants. There was just one basic car that came standard with Aircon, electronic boot release, leather-wrapped steering wheel and pretty much nothing else.

The 1000 and Esteem became an integral part of the car culture of the 90s. Alloy wheels, power-retractable antennas, boot spoilers, body-coloured bumpers, CD changers, anti-theft grilles for the lights, leather seats, sun films and what not became popular mods for these cars. It became common for used car dealerships to scam people by labelling a 1000 as an Esteem. The cars featured in multiple movies of the era and were even owned by some imminent people. Mr. Rajiv Gandhi behind the wheel of his Maruti-1000. Image source: cartoq

The Esteem even starred in some movies. In the Govinda starrer film ‘Dulhe Raja’, the car was seen ferrying the legendary Kader Khan:

Image source: screenshots from the movie uploaded on YouTube on the channel ‘Shemaroo’.

The Esteem became popular even among the ‘Aam junta’. It sold in decent numbers and became a common sight on the roads. One was much more likely to spot an Esteem than a Sierra/Estate, Peugeot or Contessa.

The main reason why the Esteem was popular was the fact that it looked more with the times when compared with the other sedans available. Before other car makers came in, Esteem had a monopolistic hold over the sedan market. However, when the Ford Escort, Daewoo Cielo and Opel Astra arrived on the scene, its glory quickly faded. These cars looked more modern, had more power, came with more equipment, were slightly bigger than the Esteem and weren’t much more expensive. Maruti did put in efforts to match these cars on equipment by introducing the Esteem VX in 1996 followed by a major facelift in 1998, but these cars were inherently better. However, Maruti still managed to carve out a niche for the Esteem by repositioning it in a segment lower than the newer cars. The Esteem’s new USP became the fact that you could get a sedan for a little more than a hatchback. The Esteem enjoyed decent sales in the entry-level sedan segment, but only until the Hyundai Accent and Ford Ikon arrived on the scene.

How did an Esteem join our garage?

My Grandfather’s cars were always indicative of the events taking place in the car market. His first car was a 1940s Plymouth Roadking that he bought used at the time of starting his medical practice. The Plymouth was replaced by a 4X4 Mahindra-Willys due to the roads he had to traverse. As the roads improved, the Jeep made way for a Green Fiat 1100D, followed by an orange Standard Gazel in 1974. Post the Gazel, a lovely Blue SS80 found its way into his garage. Then, in 1995, the SS80 was replaced by the car being discussed here, the Esteem. It was not a difficult choice. The Padmini, Ambassador, 118NE and Contessa were too old. He already had an M800. The Maruit Zen and Fiat Uno were not much larger than the 800 that already inhabited the garage. The Armada, Sumo and Gypsy were too noisy and crude to be personal vehicles. Estate and Sierra were rejected because we already had an Estate. The only real competition was between the Peugeot 309 and the Maruti Esteem. (Our car was purchased just before the new global competition came in. Had the Ford Escort been available, I have a strong feeling that it would have been in our garage today). The Esteem was sleeker and was much more likely to have good service and support. An easy decision, then. The Esteem was brought home for a sum of 4,45,914. Ours was one among the only two Esteems in that particular district back then. 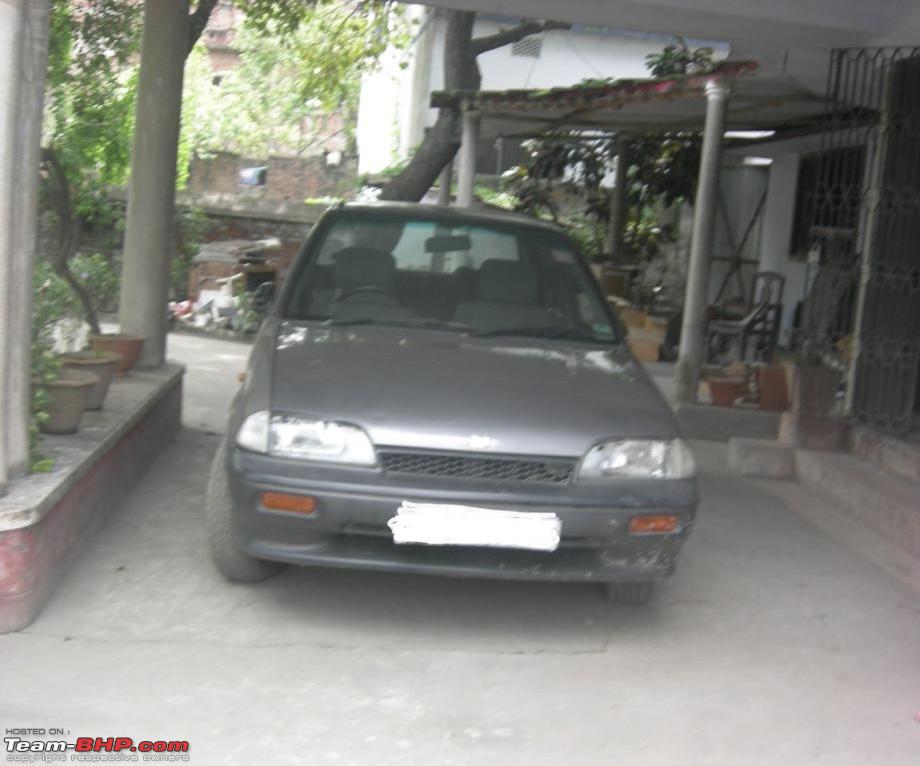 Since my Grandfather’s clinic was attached to his residence, the car never had to be used for commuting. It was only used for social visits, airport runs, outstation trips and an odd errand or two. As a result of this, the car saw very low running. As of today, it only has 21k on the odo! Still, despite the low running, service and part replacements were never ignored and always done timely. It was maintained like a typical ‘Doctor’s car’, with every little thing addressed at the right time. The car was used and maintained regularly until 2009. Post that, circumstances caused its running to go down significantly. Between 2009 and 2015, the car merely ran a couple of hundred kilometres every year. This reduced running became zero after 2015. The car was virtually abandoned. It was soon colonised by rodents, lizards, bugs and other critters. The tyres sagged, water entered its cabin, trespassers nicked parts off it, the wires and interiors got chewed up and rust started to creep in at various locations.