Ride along with HOT ROD’s David Freiburger and Mike Finnegan on Roadkill, as the duo go in search of their next gearhead adventure! The next episode airs September 2, and subscriptions to the MotorTrend App start at $4.99 per month or $49.99 per year after a 14-day free trial offer.

This time on Roadkill, the Freiburger and Finnegan don’t totally fail! Failure is usually the norm, but while rescuing the T-37 Pontiac Steve Magnante found at L&L Classic Auto in Idaho on Junkyard Gold, the guys figured they would do things the “right” way. No, you aren’t living in an alternate reality. Steve picked out such a good car that Freiburger and Finnegan took all the precautions to ensure the car would run and drive reliably. It wouldn’t be Roadkill without bumps in the road—of which there are many—but guys revive the crusty Pontiac and road-trip to an Evel Knievel landmark and make a shocking discovery about the engine they don’t know they have.

The Pontiac T-37 was the most basic GTO variant you could get from the Red Arrow in 1970, but customers could still order the car with any engine available all the way to the ram-air 400 and 455ci engines. Because it was the base model and didn’t have the prowess and insurance costs of the GTO, they were far cheaper to own. This example that the guys rescue has a four-barrel Quadrajet carburetor installed, meaning a couple of things: either the intake and carb were swapped years ago, or it’s a factory 400ci car. You Pontiac guys will certainly know that from the 287ci engine in the 1950s all the way to the 455, the engines all look nearly identical from the outside. So which one is it? You’ll have to check out the newest episode of Roadkill to find out! 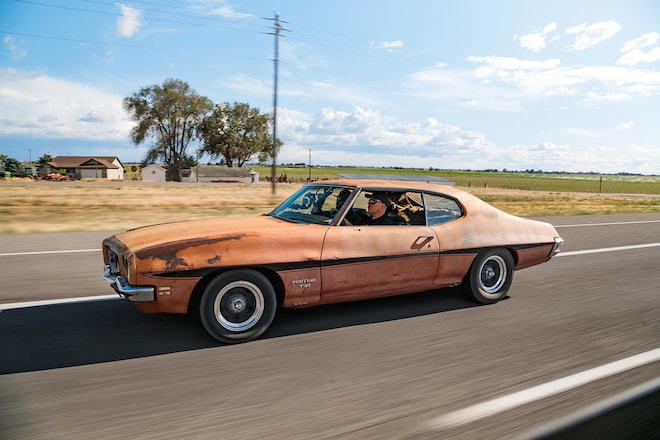