The late Neil Peart is one of the biggest names in classic rock. His legacy in the world of drumming solidified as Rush swept the radio waves in the 1970s with songs like “Tom Sawyer.” His life of quickly-ramped success in rock ‘n roll also helped to bring him another staple of American culture: fast and expensive cars, all of which are soon headed to auction.

Sadly, Peart passed away in 2020 due to brain cancer. In addition to his musical legacy, he also leaves behind his prized stash of vintage exotic cars that he affectionately called the “Silver Surfers” collection—including a 1964 Aston Martin DB5, a 1970 Lamborghini Miura, and a 1965 Maserati Mistral Spider—given that all but one is coated in matching metallic paint. 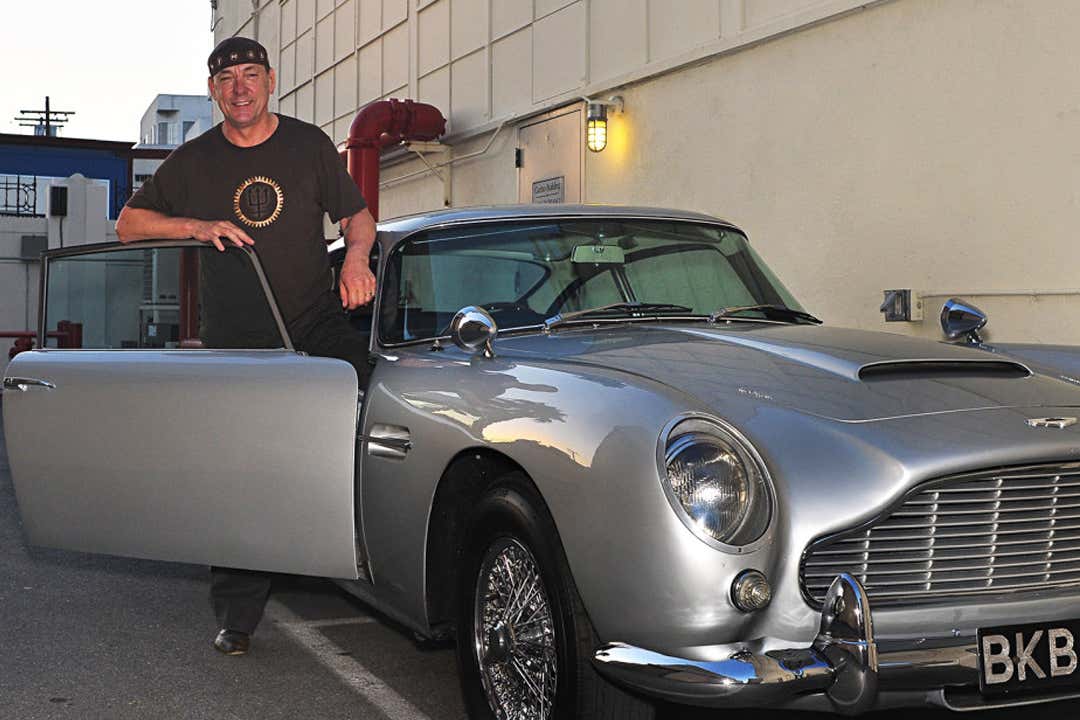 The assortment of vehicles is now slated to be auctioned off at Gooding’s opulent Pebble Beach sale in August, and although most of us won’t get the chance to own one of these works of art, we can still appreciate them from afar, just like Peart’s contribution to music.

Peart became a car guy at a young age. Specifically, he had a well-known soft spot for the classics during his teenage years—and his collection shows that.

It all began with the acquisition of a 1964 Aston Martin DB5, the car that he had lusted after since he was a boy. He collected car after car, building a modest collection of rare nameplates that is estimated to be worth millions today. The name of the collection, “Silver Surfers,” came to Peart one day while driving his DB5 along the coast of the Pacific. As the waves crashed along the shoreline, he felt like a wave rider in his Aston and also quickly realized how well the silver color complemented the ocean water. The name just stuck. 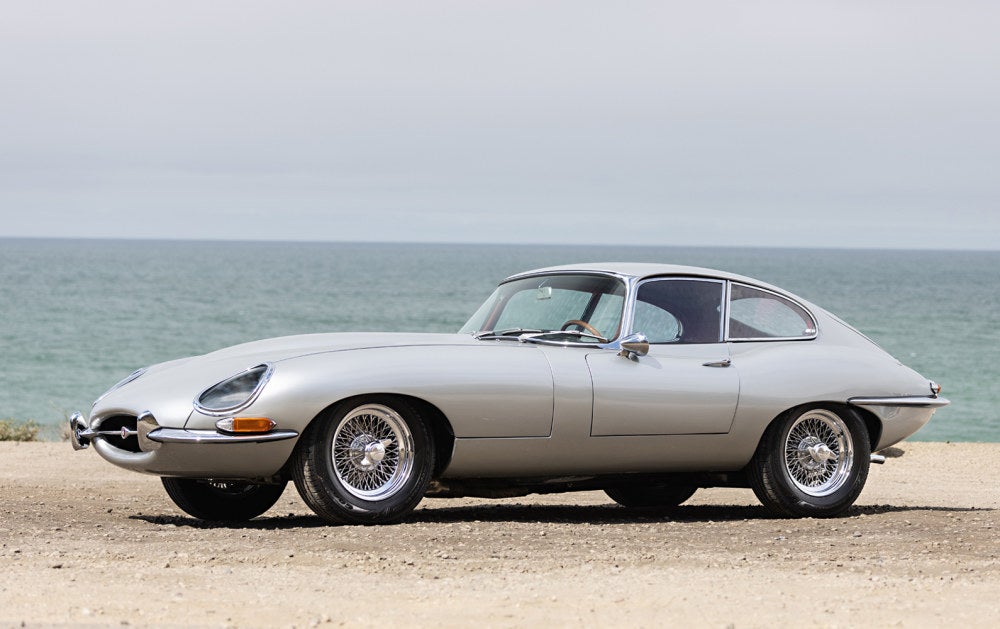 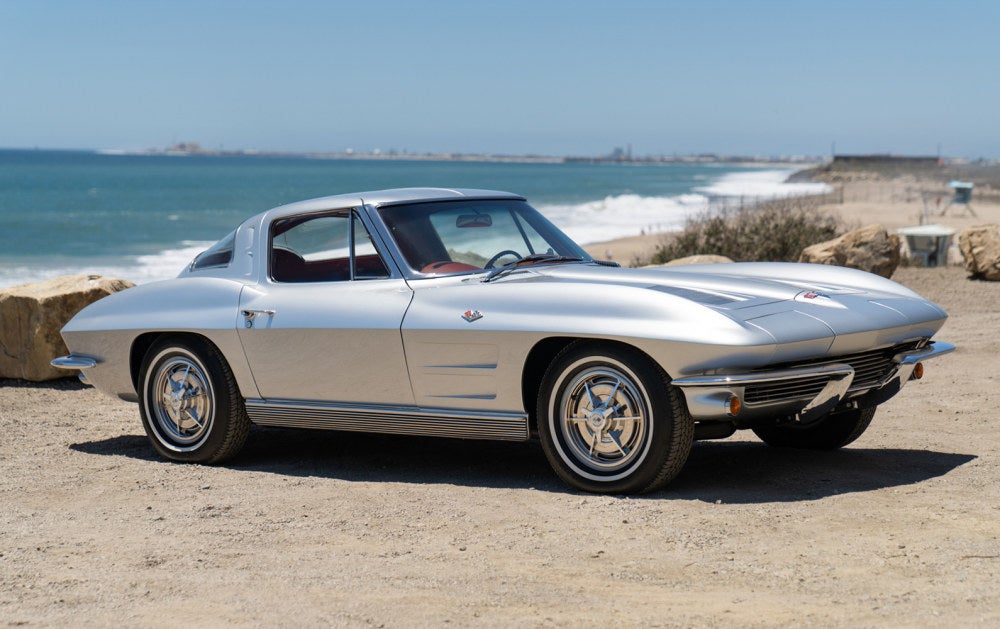 Another member of the collection is a 1964 Jaguar E-Type. Peart’s wasn’t just meant to sit around looking good, it was also meant to be driven. He had the car’s suspension upgraded, Wilwood disc brakes installed, and a Tremec five-speed gearbox with a lightweight flywheel to really wind out the factory 3.8-liter inline-six. The car is expected to fetch north of $140,000.

Peart also scooped up a factory split-window 1963 Chevrolet Corvette. This particular car wasn’t modified like the Jaguar, but instead, it was meticulously restored to factory specification—all the way down to the red vinyl interior. The C2 Corvette will likely bring in between $150,000 and $180,000. 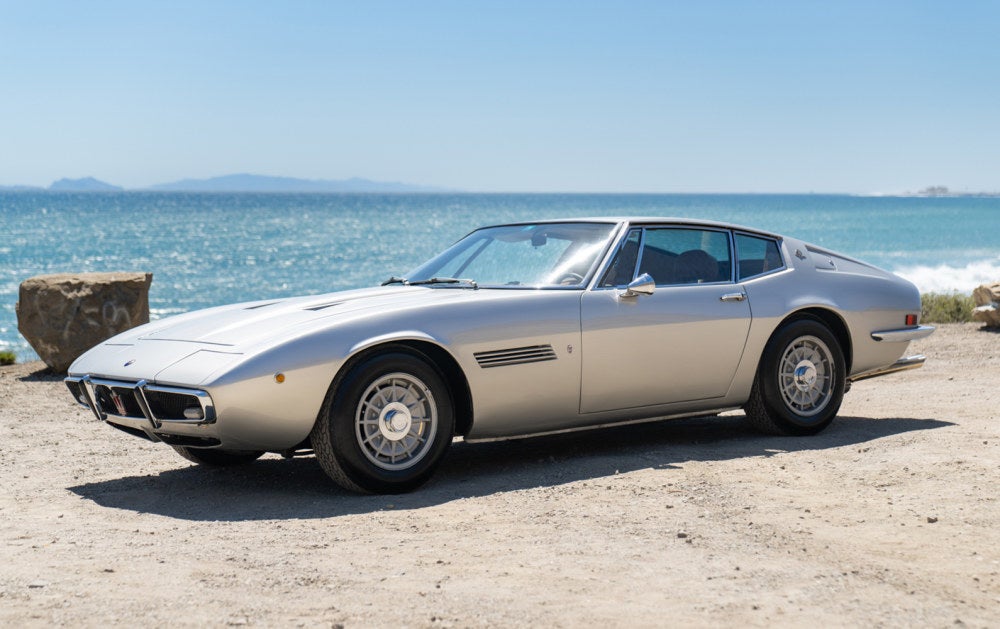 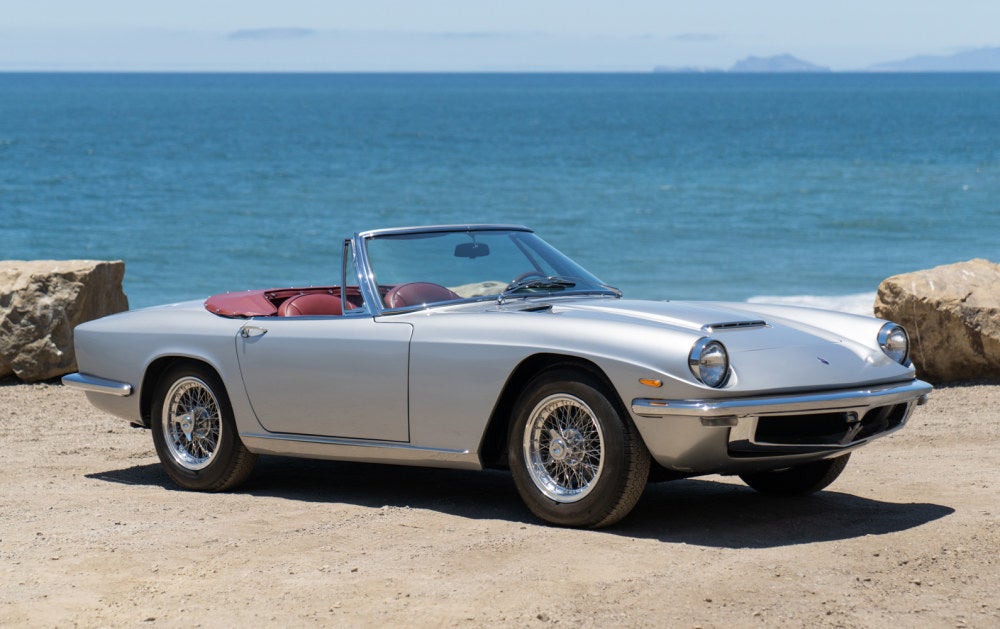 The Giugiaro-designed 1973 Maserati Ghibli SS Coupe is one of those cars that features all of the classic motifs of the ’70s; hidden headlights, a sloped roofline thanks to its fastback design, and a long nose leading up to its brawny front grille. Only 425 of these cars were produced, and this one happens to have the desirable 330-horsepower V8. If you plan to take it home, you’ll want to bring at least $250,000.

If you prefer convertible Italian cars, there’s also a complementing 1965 Maserati Mistral Spider up for grabs. Like the Ghibli, the Mistral is just one of 125 Spiders produced, and like the C2 Corvette, this one features a stunning red leather interior and was carefully restored during Peart’s ownership. The car will likely fetch more than $575,000 when the hammer falls. 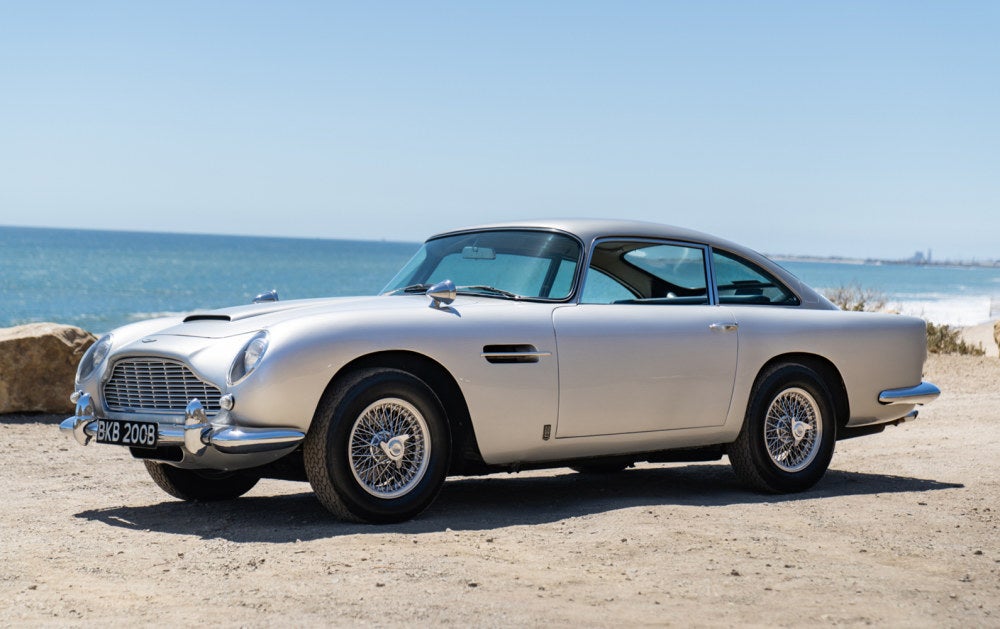 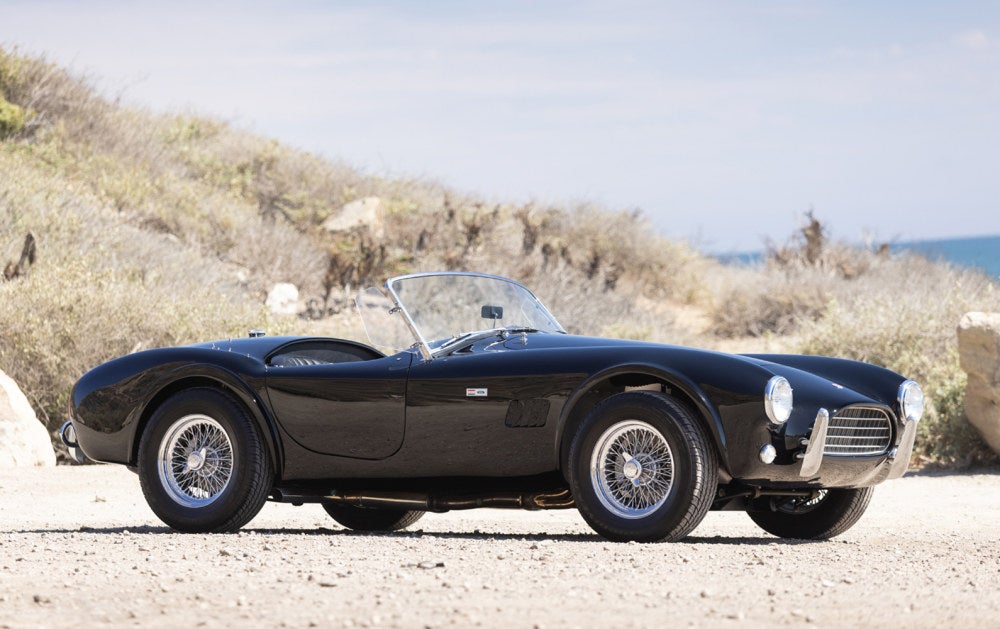 Now we come to the car that started it all: the 1964 Aston Martin DB5. While not the most valuable car in the collection, it was the vehicle that sparked his hobby. This grand tourer features a five-speed manual gearbox, blue leather interior, period-correct wire wheels, and all the James Bond vibes you can handle. Estimated take is between $650,000 and $725,000.

Remember when we told you one of the Silver Surfers wasn’t silver? This 1964 Shelby Cobra 289 is the exception. Painted in a glossy black finish, this was the centerpiece of Peart’s collection, and one of his last acquisitions in 2015. The Cobra has been left to factory specifications and was restored in the mid-2000s. It’s likely that this particular car alone will net somewhere between $900,000 and $1,000,000. 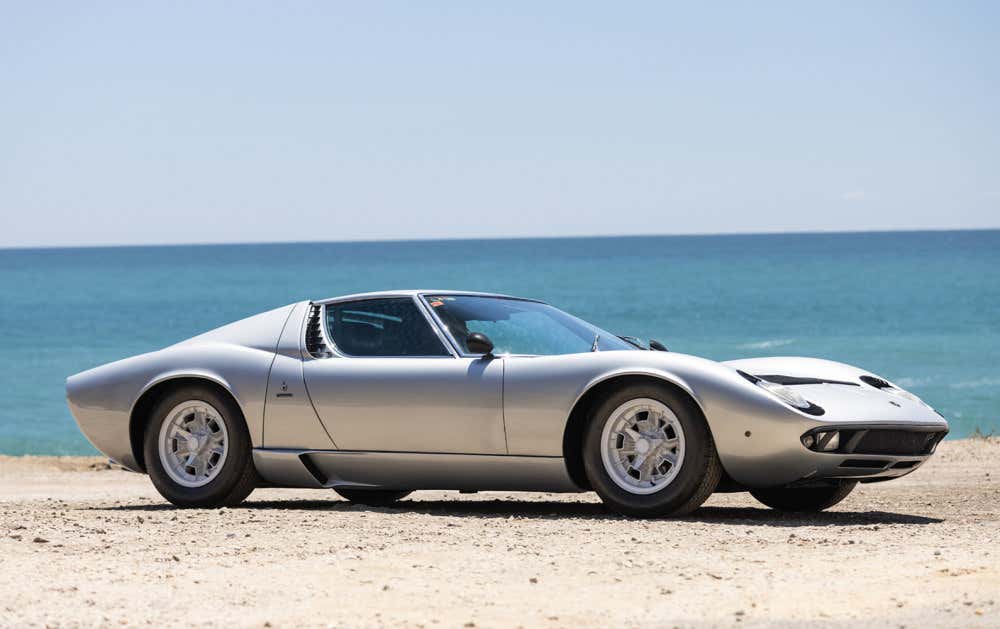 Last (but certainly not least) is the 1970 Lamborghini Miura P400 S: the world’s first true supercar. Its 2,800-pound figure features unmistakably exotic body lines and a low-slung roofline—the epitome of Bertone-designed exotics. Its carbureted V12 produced a respectable 380 horsepower, giving the car the ability to sprint from zero to 60 mph in around 6.7 seconds. This is perhaps the most valuable car in Peart’s lineup and could bring in as much as $1.5 million.

Inside the Impossible Dream of the Nuclear-Powered 1958 Ford Nucleon