The car’s first service cost me only Rs 250 since I was on the SMP package. The total expense, however, was Rs 2,000.

BHPian rideon74 recently shared this with other enthusiasts.

It’s been a blissful period with the baby Skoda after I had the dashboard rattles & door beading squeaks sorted out by mid of Feb 2022. The car ran 9200km after that and it’s just completed the first 15K service. Happy to report that none of the niggles which were rectified by the dealership (SGA cars, Coimbatore) has surfaced again.

Inferences after 15K on the odo The incident that shouldn’t have happened

In the past few months of ownership, I have had the usual near misses that every Indian car owner experiences – stray dogs darting across on highways, careless drivers casually lane changing without notice, two-wheelers cutting too close for comfort through rush hour traffic & the likes.

Escaped all of these but for one minor calamity that struck the car (literally) and I didn’t even know it happened. Sometime in March, I was inching through a frustrating evening traffic snarl thanks to some politician’s visit & the vehicles had formed 3 lanes on a 2 lane junction bottleneck. When the cop at the signal ahead finally let us move, I heard a weird noise from my left that sounded like metal being slowly twisted. It was alarming, but since there wasn’t any thud or bump that raised a suspicion that something had grazed my car and because I had to move forward with the traffic, my focus went back to snaking my way out of the mess at that moment.

Much later ahead, I pulled over to take a look and I saw a fist-sized depression very neatly carved into the left rear door, close to the hinged end. The front door there had only suffered a mild, surface-level scratch about 5 inches long. There wasn’t any cut or tear on the rear door – just a sheared depression that left the base metal exposed bare. It measured not more than 4 inches in height and about 3 inches in width. The depth was around three-quarters of an inch and the whole area looked scooped in. Jeez… not a good ending for a long, tiring day.

And life goes on

Thinking back to the moment I had heard the noise, I remembered a disgruntled water tanker truck to my left that was determined to shoulder its way forward and a slew of jostling two-wheelers to my right. I suppose there was some hard metal part sticking out from the mini truck and that had caused the damage.

The next morning, after a discussion with the Skoda service team it was decided that it was best to get the door outer panel replaced. The metal in the depressed part had been stretched and weakened. So patchwork was not recommended by them. I didn’t think twice about the loss of the NCB actually – just couldn’t bear the thought of a patchwork job on the car within 6 months of ownership. Having engaged before with the team at SGA & the SVC manager closely for getting the dashboard rattles sorted out, I knew the car was in good hands.

But my project visit schedules were not flexible for the next 5-6 weeks and almost every week required an out-station drive. I briefly considered using my ageing Scorpio but its dependability issues for long journeys made me opt out of that alternative. Took a chance and used the Kushaq as it were till I could make time to leave it at the SVC.

After approx. 1.5 months the car went in for the door replacement and the 15k km service job clubbed together. Surprisingly, not a spot of rust had developed on the damaged portion – even though some unusual, extended summer showers + the regular washing had happened during this period.

I decided to state the reason for the damage as actuals in the claim form & the insurance surveyor cleared the claim request without any fuss. The replacement parts arrived in six working days. The outer panel of the door was listed 15K inclusive of GST in the inventory order copy. The fitment, painting & 1st service was completed in four working days. The entire episode was hassle-free and took 12 working days from start to delivery. The claim amount was for 38,000/- of which 36,250/- was sanctioned by United India. The 1st service required only payment of Rs. 250/- since I was on the SMP package. The total expenses paid out were 2k.

Did a test drive after singing off but just one km from the SVC, I could hear an intermittent rattle from the inner half of the replaced door. The same was rectified by the next day and the service team did me a favour by dropping off the car at my place. A tiny potted plant was sent along with the driver as a gift and while it might not seem as much, it certainly was a nice touch.

So almost 2 weeks & 2K later the baby Skoda is back to looking as new as a 6.5-month old car can be. All that shines is a pain to maintain

I kind of knew right after the initial days of ownership that the glossy trims on the dashboard were going to require care while cleaning. But there’s only so much one can do to protect these areas.

Looking back, I should’ve gotten a PPF layer done on the scratch-prone zones. Sigh.

The pics show the condition after just 6 months of usage. Mind you, I use a separate set of micro-fibre cloth for interior cleaning & rely on a car cleaning/detailing outlet who are quite professional. New Kushaq owners please take note: just get the PPF done ASAP on the glossy zones on the dashboard.

My work involves very regular trips to the Nilgiris and now I’ll also be doing routes that take me to the hills near Coorg.

In the Nilgiris, it doesn’t take much time for a fog engulfed stretch to go from this: 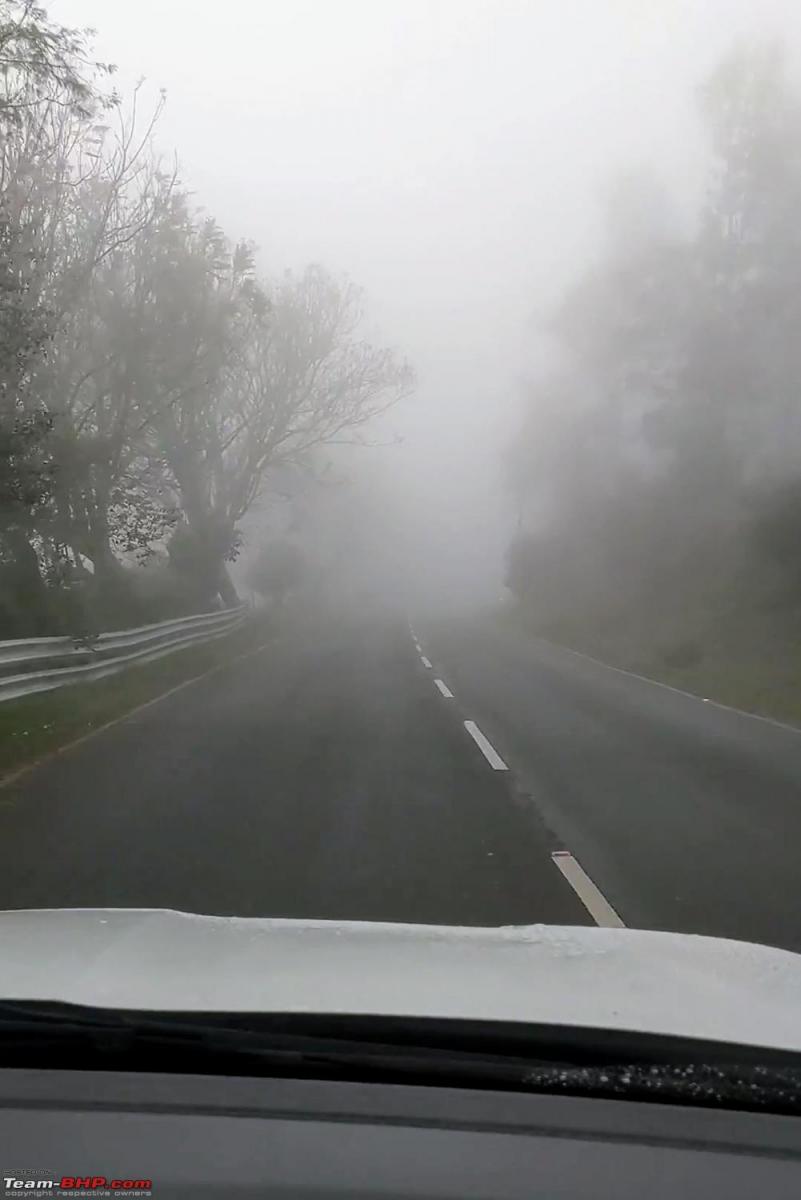 to this, in a few minutes or just around a few bends: A recent risky experience was my recent drive via the Dimbam Ghats to cut across Ooty and get back to my place at Coimbatore. I couldn’t avoid the night drive as there was a personal reason to be available at Coimbatore the next day morning. By around 7:30pm the fog was so dense at the Ghats stretch that I couldn’t see a thing about 2 metres ahead. Things got worse at Ooty and this part of my return journey took far longer than it should have.

So any suggestions would help for compact-sized imported fog lights which will be effective but not ruin the beautiful frontage of the Kushaq. I’ve got people in the US who frequently travel to India, so I could try to get a pair that are compact but work well.

Hyundai might discontinue the Sonata as sedan sales crash