GM’s Super Cruise is already one of the best driver-assist you can buy in the United States by a long shot. It’s capable of true, fully-legal hands-free driving on some 200,000 miles of American highways, giving GM a handsome lead on Ford BlueCruise’s 100,000 miles and, well, Tesla Autopilot’s big ol’ zero. It’s a lead GM’s only extending, too, by adding the ability to tow a trailer with Super Cruise active on the 2022 GMC Sierra pickup—a killer app that I was among the first people outside GM to test.

Now, it’s important to note I was driving a prototype 2022 Sierra on a closed course within the safe confines of GM’s Milford Proving Grounds in Michigan, where it trials everything from the battery-electric drivetrain in the 2022 GMC Hummer EV to the brand’s “transparent trailer” camera tech. This is far from a definitive review of how towing with Super Cruise will work in the real world. But what I can say is that combined with the new ability to perform automatic lane changes and passes—you won’t even have to flick the turn signal when coming up on a slower vehicle—it feels like it’s going to be an almost indispensable convenience for longer hauls. 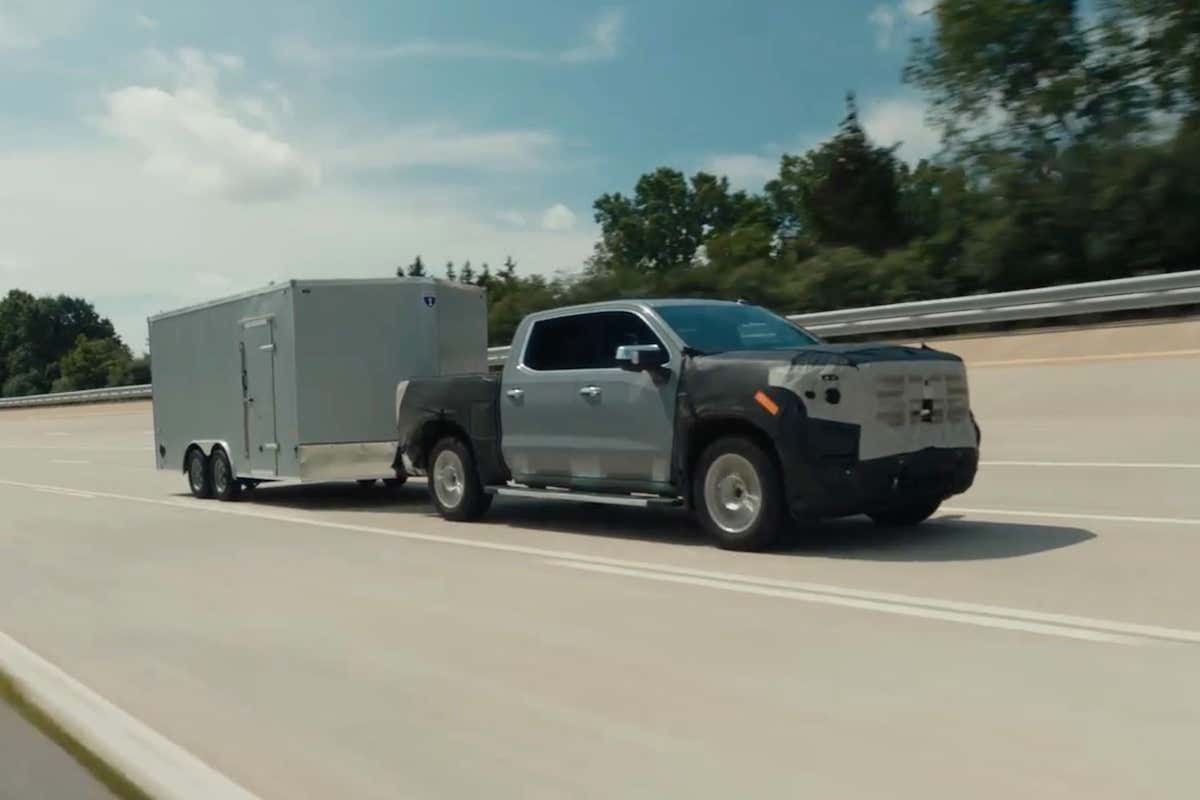 Even though the seamless lane changes are something that no other vehicle can do right now—not even the SAE Level 3-pioneering Honda Sensing Elite in the JDM Honda Legend, with its true (albeit limited) ability to drive itself in traffic jams without supervision—Super Cruise is still firmly a Level 2 system. That means it’s technically still me who’s driving, me who’s in control, and me who’s responsible for the vehicle. I’m just delegating some tasks to the vehicle’s computer, and if I were to, say, crash into a police cruiser with my vehicle’s ADAS active, I couldn’t point the finger at GM.

Sufficiently refined, Level 2 ADAS can trick you into feeling like a passenger, even though you’re definitely still the driver, and GM’s case, required to keep your eyes on the road at all times. (This is tracked with a driver-facing camera on top of the steering column.) Super Cruise only works on highways or divided roads that GM has previously mapped with lidar, creating a data bank that meshes with the vehicle’s realtime cameras and sensors to manage the steering, accelerator and brakes.

Still, entrusting one’s camper, horses, race car, or whatever else is being towed to the truck’s computer requires what GMC marketing Vice President Phil Brook called “a leap of faith,” one that I was all too glad to take. 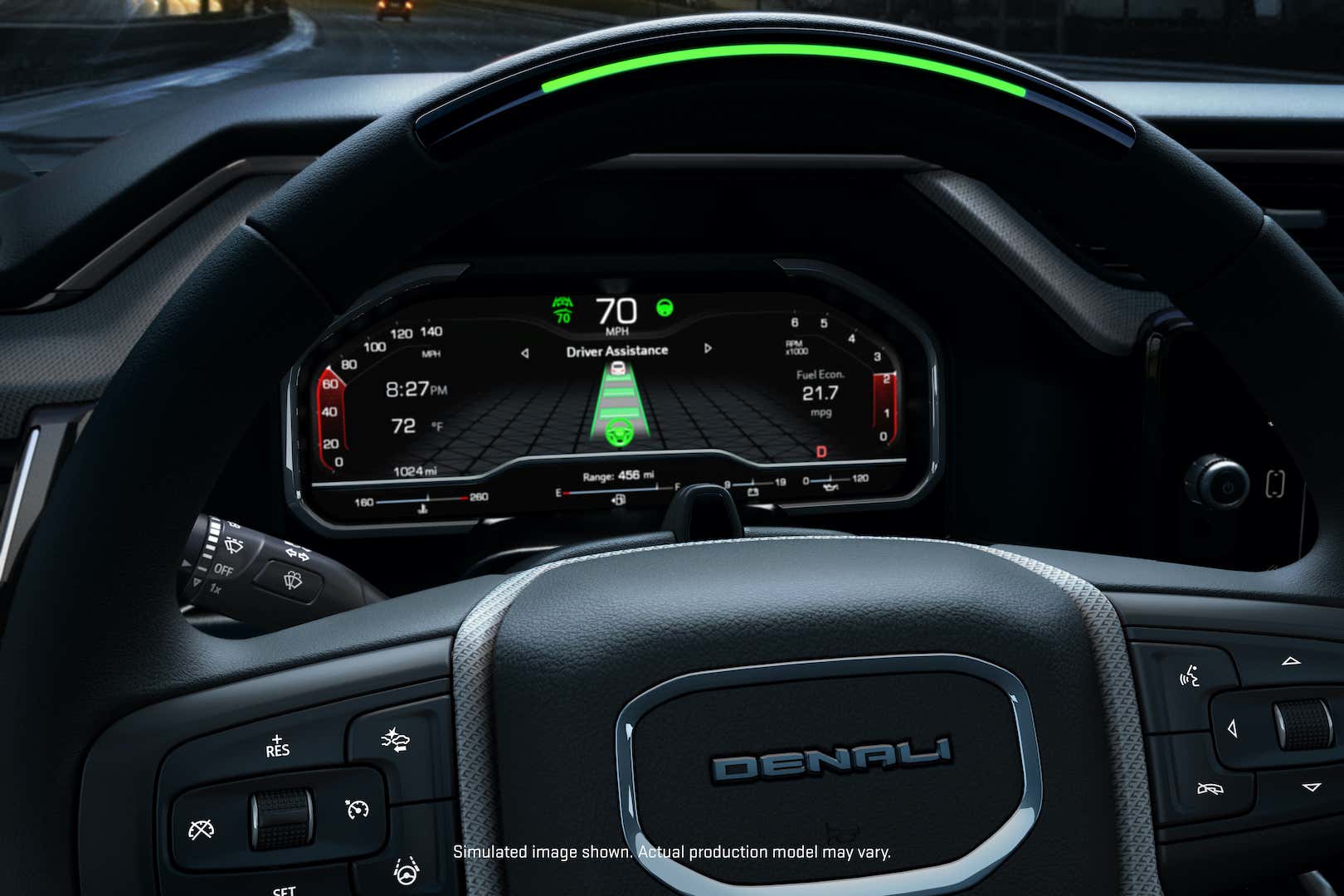 Milford’s banked, circular test track offered my first taste of Super Cruise in a Sierra sans trailer at roughly highway speeds. An icon lit up on the dash, I pressed a button on the wheel, and a green light came on to indicate Super Cruise was active. My hands hovered by the wheel, ready to take over in case the Sierra started bumper-bowling down the gently curving lane, but they quickly sank into my lap. The truck tracked straight and true, staying centered in its lane without a single twitchy adjustment—it did the job better, dare I say, than I do. It was like becoming a passenger to a top-dollar chauffeur and helped me understand why a contingent of drivers fear they’ll be automated into the back seat.

GM only intensified the illusion, though, by radioing a chase car to commit a highway driving sin: Passing me, pulling in front, and slowing down. Super Cruise reacted the way any human driver would, activating the turn signal, switching lanes smoothly, accelerating past, and rejoining the right lane. Repeating the maneuver a few times condensed an hours-long game of leapfrog down the Interstate to a few moments, and showed just how easy it was to become used to this technology—and dare I say, maybe a little too reliant on it.

I could already tell that I’d miss Super Cruise, and I hadn’t even gotten to try it with the trailer on yet.

For that, GM switched me to a second test truck hitched to a car trailer, one definitely big enough to contain a prototype Corvette Z06. The engineers sent me back out onto the oval and instructed me to reactivate Super Cruise, which I did this time with the knowledge that I could let my guard down to take the experience in.

This time, with a vehicle on a self-determined trajectory beneath me and a heavy load out back, I realized something: This was almost exactly what I’ve imagined operating a train locomotive would be like. I was slicing through the landscape at the helm of tons of metal, with just enough attention to spare to appreciate my surroundings. If you’ve ever wanted to rule the rails—and deep down, who hasn’t at one point?—this is as close to realizing that dream as a driver’s license will ever afford. You can see how it looked in our video above.

The exit to the test track put a period on the moment, and it won’t be one we can draw into a semicolon until we get the chance to put Super Cruise’s towing behavior to the test in the real world in the 2022 GMC Sierra 1500 Denali—or I try Ford’s competing BlueCruise system coming this quarter. (Ford has strongly hinted that towing will be unlocked in a future update.) Throw a Super Cruise Sierra into heavy traffic with 10,000 pounds on a trailer and the results could be very different, especially if it’s trying to figure out dynamic lane changes on its own. But what I saw in Milford earlier this month felt like a true glimpse of the future, where boring highway driven is largely handled by a computer, and the squishy human behind the wheel can sit back and relax, eat, or even indulge a childhood fantasy.