Tesla has always been eager to innovate in the automotive space. It hasn’t limited its efforts to electric drive either, making big decisions when it comes to the interior experience of its cars as well. After a new update, it’s now possible to game on the infotainment screen in a Tesla while the car is moving, drawing the ire of the NHTSA as reported by Reuters.

Tesla rolled out three new games to its cars in an over-the-air update that went out during the summer—Sky Force Reloaded, Solitaire, and The Battle of Polytopia: Moonrise. The games trigger a warning message when started, indicating that “Playing while the car is in motion is only for passengers.” The player must press a button to indicate they are a passenger, but there is no verification method to stop a driver from doing so. 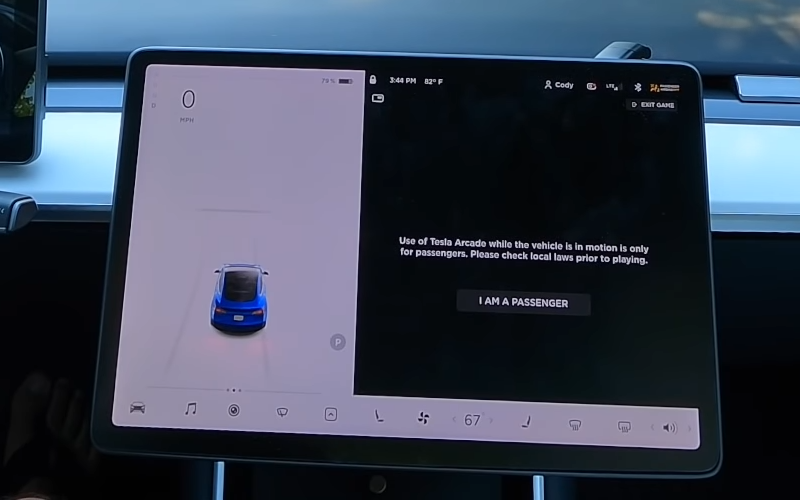 Players must press a button indicating they are not responsible for driving before they can play a game.

A video from YouTuber Cf Tesla covers the 2021.12.25.7 software update which was released earlier this year. It notes that the Tesla Arcade feature now allows games to be played with the car in motion. The touchscreen clearly displays a large button to press that says “I AM A PASSENGER” before allowing the game to start.

The games only run full-screen on the infotainment system if the car is parked. This is due to the fact that driving controls, like shifting from drive to reverse, are activated by the touch screen on modern Teslas, and must remain visible while driving. Notably, streaming services like Hulu and Netflix are still locked out while the car is moving.

The NHTSA is concerned with the move, due primarily to the already-high instances of crashes due to drivers being distracted behind the wheel. In a statement to Reuters, the NHTSA indicated that “Distraction-affected crashes are a concern, particularly in vehicles equipped with an array of convenience technologies such as entertainment screens. We are aware of driver concerns and are discussing the feature with the manufacturer.”

Notably, NHTSA statistics indicate that distracted driving was implicated in 3,142 deaths in the United States in 2019, out of a total of 36,096 road fatalities that year. However, some safety advocates suggest that the real number may be much higher, as many drivers may not admit to being distracted behind the wheel.

It’s not the first time Tesla has come to the attention of the NHTSA, either. The government agency is currently investigating the automaker over the issue of crashes caused by Tesla vehicles driving in Autopilot mode.

Games have been available on Tesla infotainment screens for some time already, but it’s only in the most recent update that they’ve been playable while the car is in motion. Historically, automakers have shied away from putting distracting content like games or movies on screens visible to the driver. Whether this marks a turning point away from that convention will become clear as the NHTSA concludes its discussions with Tesla.