The 2021 Jaguar F-Pace Electrifies for Fall

While Jaguar might be best known for its beautiful sports coupes, the company’s efforts in the world of crossovers should not be ignored. At least, Jaguar is trying to make sure that you can’t ignore the F-Pace and is giving it an overhaul for 2021. The 2021 Jaguar F-Pace follows the traditional formula of mid-cycle refreshes and sports new sheetmetal at the front and a handful of updates to the ever-important interior technologies. Oh yeah, and Jaguar is preparing its inline-six-cylinder engines and mild-hybrid system for the 2021 F-Pace.

The most obvious change to the 2021 Jaguar F-Pace over the current model is the new front styling. That includes a new hood as well as headlights and redesigned air intakes in the bumper cover. While the new styling isn’t a huge departure from the current F-Pace, it becomes obvious when you park the two models next to each other. The styling looks sleeker than the outgoing model. The slim headlights feature LED illumination and what Jaguar calls “Double J Blade” accent lights offsetting the headlamps.

In addition to the sleeker exterior, the new interior appointments help push the Jaguar F-Pace into the new decade. The first thing new Jaguar F-Pace drivers will see is the big, curved touchscreen sitting in the center stack. The 11.4-inch touchscreen controlled infotainment system sports a larger screen than the outgoing models as well as a new operating system. The 2021 Jaguar F-Pace uses the same infotainment system that runs in the Land Rover Defender: Pivi Pro. The new system should address problems that people (read: me) had with the outgoing infotainment system and be more user friendly. Naturally, the system supports both Apple CarPlay and Android Auto.

Joining the new infotainment system and center screen are the same luxe materials and coverings as well as new hardware. The 2021 Jaguar F-Pace features a new center console that helps tie the new center stack into the rest of the interior design. Jaguar also introduces a feature to keep its passengers enjoying the comfort of its cabin: active noise canceling. Called Active Road Noise Cancellation, the system does exactly what its name suggests: sheds road noise. Also joining the list of new tech, over-the-air software updates are making their way to the 2021 Jaguar F-Pace. 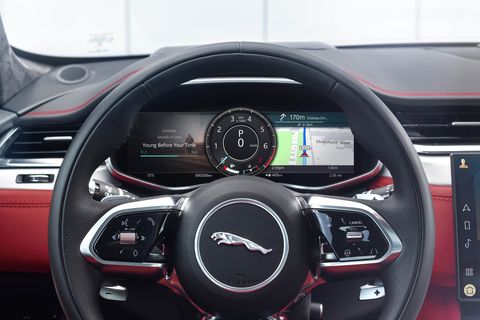 A slate of new safety tech makes its way into the 2021 model. Jaguar is introducing an optional system called Clear Exit Monitor, which alerts passengers of possible bicyclists before opening the F-Pace’s door. That might be a niche problem, but it will help keep a bicyclist safe and your F-Pace free from accidental damage. Blind spot monitoring and a rear traffic monitor are standard, which isn’t surprising at this price point, but both are great features.

Rounding out the major changes making their way to the refreshed F-Pace: powertrains. The entry-level turbocharged 2.0-liter turbocharged I4 is unchanged heading into the new year and still sends 246 hp into the eight-speed transmission. Joining the lineup is a pair of mild-hybrid-equipped 3.0-liter inline-six options. The system operates similarly to other 48-volt mild-hybrid systems and uses a belt-driven starter generator mounted to the engine that helps eke out more performance and make the package more efficient. The mild-hybrid-equipped I6 engines will start with a 335 hp offering in S 340 trim but is cranked up to 395 hp on the R Dynamic-S 400 models. Like the four-cylinder engine, these straight-six mills are also mated to an eight-speed automatic transmission.

It’s safe to assume that there will be a slight price increase for the 2021 models, considering the added features and cost of the new tech. However, don’t expect the base F-Pace to break the $50K mark. These new F-Paces are a step in the right direction for Jag in its continued push in the ever-competitive luxury crossover market.

Hear for Yourself: Sounds Like the Cadillac CT5-V Is Getting a Supercharged V8

'Doesn't matter who's next to me, I'll beat them'
Car Reviews