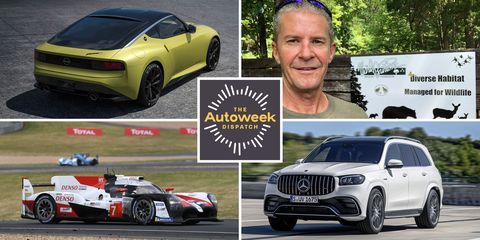 Not only is Nissan’s Z Proto showing us the next-gen Z car, but could it be true that Bugatti is for sale?!? Here’s what else is happening in the car world:

FROM THE EDITOR’S DESK

My colleague Al Pearce has been writing for Autoweek since 1973. ’73!! In that time he’s learned a thing or three, including knowing a good story when he sees it, and knowing how to tell it well.

This week Pearce turns his storytelling talent to former NASCAR driver Ward Burton, a fellow Virginian who is definitely up to some good. As Pearce tells it, as he was winding down his Cup career Burton focused his efforts on his Ward Burton Wildlife Foundation, a nonprofit 501(c)(3) created in March 1996. The WBWF preserves and manages several thousand acres of forested land and waters in Virginia and supports the mission of maintaining natural habitats, open spaces, easements, and working farmland at the Army National Guard’s training facilities at Fort Pickett, Virginia, and Fort Indiantown Gap, Pennsylvania.

It’s a fascinating story, so I reached out to Pearce for the backstory.

“I’ve known Burton since he was a weekly Late Model driver in the ’70s,” Pearce told me. “He got into a couple Xfinity drives that weren’t great but he did OK, and then at some point somebody thought ‘he might be a good product representative’ and his career took off.

“You can’t fit everything in a story, but Burton told me there was a time when talent was more important than money and that he got his rides based on driving skill.”

Pearce says he knew Burton was an avid outdoorsman, “but at some point I realized he was doing more than hunting and fishing, he was trying to keep land from getting swallowed by developments like golf courses and resorts. He was afraid that eventually the land he was born on and brought up on would be a shopping center. So he created the foundation and he told me that for the first 12 years he funded it out of his own pocket, buying land to keep it from being developed.

Pearce says that one aspect of the story that particularly interested him was Burton’s personal involvement. “He is an active, hands-on, in-the-woods-every day leader of this foundation. He doesn’t sit in an office while everybody else does the work. He does it himself. I think that’s important. Lots of guys have foundations, but Ward is absolutely everyday active, hands-on leadership. I thought that was a cool aspect.”

Like I said, it’s a fascinating piece. Check it out here.

In the latest Quick Spin yours truly checks out the the Mercedes-AMG GLS 63, a car that definitely put a smile on my face. Listen in while I explain to youngster Wesley Wren why I love the big bruiser. Tune in on Apple Podcasts, Spotify or wherever podcasts are played.

Nissan’s Z Proto points the way to the next-gen Z car and features several classic Z car cues inside and out that should give owners of the original a trip back in time to 1969. The Z Proto comes almost 51 years after the debut of the original Datsun 240Z at the New York auto show. The Z Proto’s front fascia is a direct nod to the ’69 240Z, as is the rakish roof and grille. Owners of the original should also appreciate details like the headlight tunnel’s concave surface, as well as the upward sweep of the window sill into the C-pillar. We can’t wait to see the production Z, happening soon, we hope!

Rumors out of Europe have Volkswagen considering offloading the most exclusive of its luxury brands, Bugatti. That’s right, Bugatti might be for sale! The word is performance EV-maker Rimac is the buyer, possibly in exchange for an equity swap that will give VW a large stake in the Croatian startup. The official line is that “we don’t comment on rumors,” but by a happy coincidence Autoweek did spend time with Bugatti boss Stephan Winkelmann in Italy last weekend, where we asked him about his plans for the brand’s future. Check it out here.

Le Mans is this weekend! That’s right, the 24-hour classic is finally happening. Here’s what to watch for: Two-time defending winner Toyota is most likely going to become just the 10th manufacturer to win the event for the third time. Why? Because it’s the only factory effort in the LMP1 field and is fielding two of the five cars in the class. So place your bets on either the No. 7 Toyota Gazoo Racing (Mike Conway, Kamui Kobayashi, Jose Maria Lopez) or the No. 8 Toyota Gazoo Racing (Sebastien Buemi, Kazuki Nakajima and Brendon Hartley) machine. The GTE Pro class is down this year, with no Ford GTs or Corvette Racing presence. Defending champion AF Corse in the Ferrari 488 GTE EVO is back with a two-car entry, competing in a field with two other Ferraris, two Porsche 911s and a pair of Aston Martin Vantage AMR machines. If you want to wave the American flag keep your eyes on the two U.S. entries in GTE Pro: WeatherTech Racing’s Ferrari 488 GTE EVO (Cooper MacNeil, Toni Vilander and Jeff Segal) and Risi Competizone’s Ferrari 488 GTE EVO American-listed entry with three French drivers (Olivier Pla, Sebastien Bourdais and Jules Gounon).

Jake Lingeman’s time in the McLaren GT taught him it’s only a GT car compared to other McLarens. Compared to, say, a Continental GT or Mercedes SL, the 203-mph McLaren is definitely a supercar. The GT’s 4.0-liter twin-turbo V8 makes 612 hp and 456 lb-ft of torque and is coupled to a seven-speed dual-clutch transmission sending power to the rear wheels at a quick enough rate to get to 60 mph in 3.1 seconds. We’d say that’s supercar territory for sure.

With winter approaching (sorry! don’t beat up the messenger) it’s time to start sourcing your project for when the snow is flying. While the actual process of chasing down your project is part of the fun, we went over to our friends at Bring a Trailer and picked out some jumping-off points for your winter vacation in the garage, just to give you some things to think about. I’m particularly fond of the ’67 Rolls-Royce Shadow.

This week on the Autoweek Podcast, No. 127, I talk to Wesley Wren about the 2022 Hyundai Tucson and the 2021 Jaguar F-Pace, discussing the Tucson’s wild styling and what that could mean for the rest of the Hyundai lineup. Wren lays out the big changes to the F-Pace. After the jump, Steven Cole Smith and Mike Pryson preview one of the best endurance races in the world: this weekend’s 24 Hours of Le Mans, obviously taking place much later in the year than it would normally. While Smith and Pryson agree Toyota should take the overall win, the other classes are much more competitive. Also, the guys talk about the Autoweek Podcast taking a break for the time being. Stay tuned for updates on the show’s revival at a later date, and stay in tune with the podcast team over at Quick Spin. Tune in here, on Spotify, Apple Podcasts, Stitcher or wherever podcasts are played.

QUOTE OF THE WEEK

“With no shutdown it would have been an easy-going year. It’s not like before COVID but it is better than [some of the] scenarios we considered—we are performing well and recovering some of the production slots we lost. I think it is important for the customers to get their cars as soon as possible with the waiting period we have, so it can be another very good year for us.”

—Bugatti boss Stephan Winkelmann speaking exclusively to Autoweek about his company’s prospects this year and next.

That’s all for this week. As always we’re on the case this weekend, monitoring and reporting on automakers’ and sanctioning bodies’ latest happenings—don’t forget Le Mans! We’ll continually update the site of course—you’ll know what’s happening when we do. Check back often!

Thanks for reading Autoweek and please stay safe.

Ad of the Week: When Pontiac Pushed a Pair of 'Economic' Supercar Wannabes