According to former Cannonball record holder (and genuinely interesting guy) Ed Bolian and our friends over at Road & Track, there’s a new Cannonball record. For those interested in the metrics, supposedly an Audi A8L went from New York’s Red Ball Garage to the Portofino in Redondo Beach, California, in 26 hours, 38 minutes. That’s nearly an hour quicker than the time laid down just last year by Arne Toman, Doug Tabbutt and spotter Berkeley Chadwick.

Obviously, neither of these trips are firsts: The Cannonball Run has taken place since the early 1970s, with subsequent trips following. There are probably countless failed attempts by people with not enough money, car or luck to even keep track of the total number of tries.

However, it seems that the recent record-breaking trip, set during a global pandemic and all, is getting some pushback from even Cannonball purists. Alex Roy, the focal point of the film Apex: The Secret Race Across America, tells Road & Track, “If you hit a truck moving medical supplies and people die because of it, that’s on you. People are counting on those trucks moving around right now. It’s not funny.”

While Roy is correct in asserting that the willful disregard for other peoples’ lives while careening through public roads at high speeds is not funny, it’s hard to blame that exclusively on a pandemic. In fact, if you hit a truck full of necessary medical supplies, or a car full of people, during nonpandemics, that would also be on you and just as not-funny. 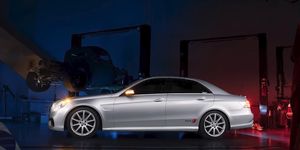 In the video above, Bolian offers the most reasonable perspective on the latest record attempt when he says, “Just because their brand of lawbreaking is different than mine, (it) doesn’t entitle me to say that they’re wrong.” That’s a hard point to argue against and brings up the hypocrisy surrounding the backlash to the new record.

More importantly, this whole thing has jumped the shark: Yes, driving is fun. It might not surprise you that driving quickly is also, well, fun. Breaking records? Also fun. However, hitting nearly 200 mph on public roadways, with spotters, laser jammers, reconnaissance sweepers and an airplane overhead to further help you shave a few minutes off a cross-country road trip? That’s kind of dumb.

Honoring the tradition of Erwin “Cannon Ball” Baker, or legends like Brock Yates and Dan Gurney, is undeniably important. However, chronic one-upmanship has pushed the expedient cross-country trip into a new realm. And that realm is lame.

We can expect at some point that this record will also topple, and that will continue as long as people keep trying. As for myself? If I need to get to California from New York in less than a week, I’m flying.

What Are the Best April Car Deals for Shoppers Who Need to Buy Amid the Coronavirus?
Car Reviews