Minis have always been about making clever use of a small footprint, and their latest concept car carries on that theme, even if it is a bit divorced from reality. It’s called the Mini Vision Urbanaut, and it’s a fun, glassy egg-shaped lounge on wheels.

If you hadn’t gathered yet from the unconventional in-car seating layout, the Vision Urbanaut is designed around autonomous driving even though Mini’s main draw for me has been how fun they are to drive. This far-future concept is all around Mini’s reputation for using space wisely, although it does feel like it’s cheating a bit to bubble out the car from its wheelbase. Maybe we won’t need seat belts or crumple zones in the future. 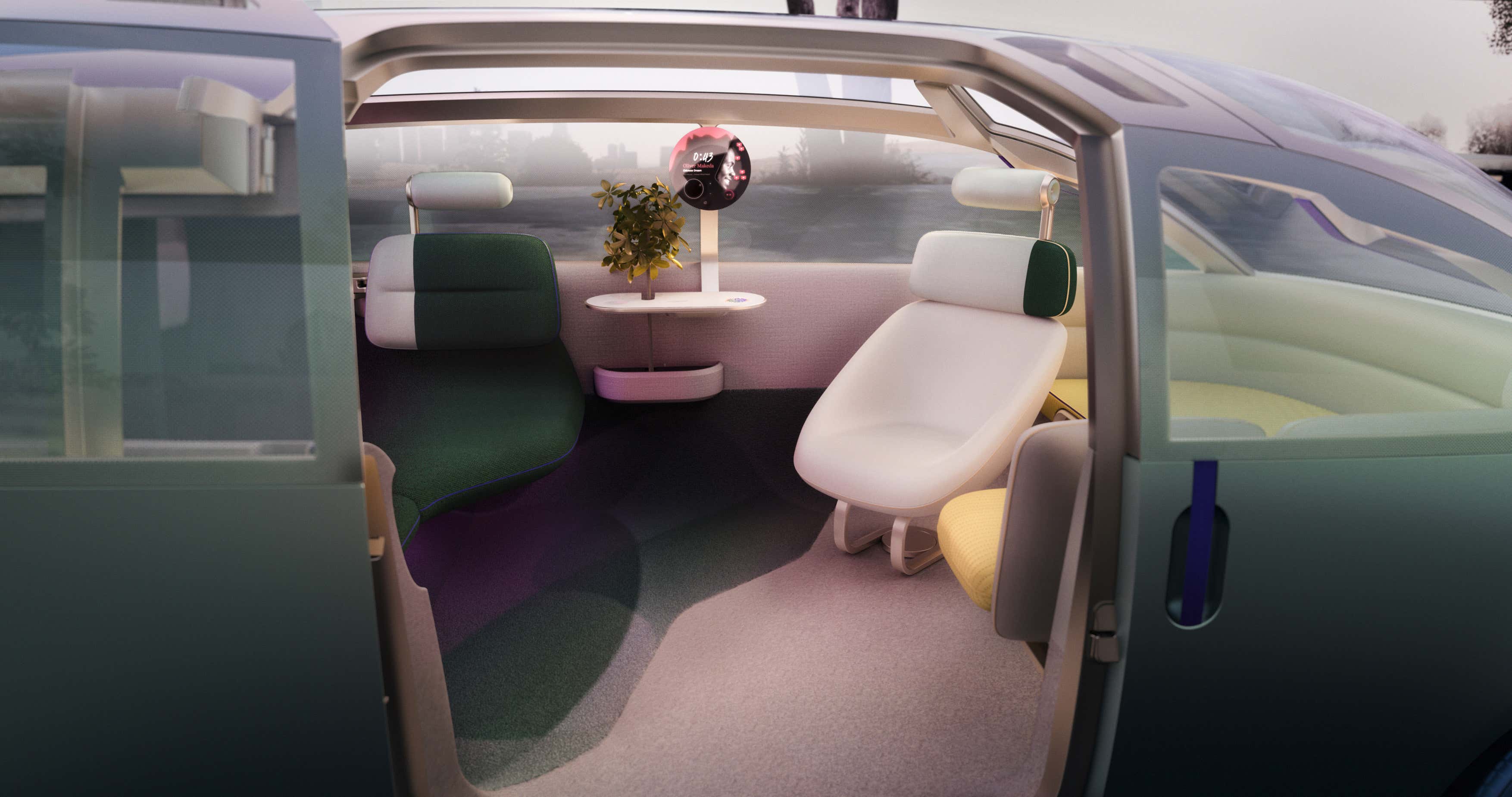 The daybed up front pops up to become the car’s dashboard when you’re moving, and the two captain’s chairs swivel back around RV-style to the front.

It is electric, though, which means that it’s a lot easier to hide the drivetrain underneath the cabin and maximize usable interior space. You can drive it, too, as it can transform from a lounge-on-wheels into a regular driveable car. The two front seats of the four-seat car rotate to the front and back, and the dashboard sticks up for drivers to use. There aren’t buttons or switches, though, and Mini says that the circular orb next to the table in the middle of the car is the car’s main control interface, not unlike the circular infotainment screen housing that Minis have today.

Meanwhile, the backrests for the big rear bench fold and turn around into different configurations to allow occupants to get comfortable. The rear is a darker area of the car, which Mini refers to as its “Cozy Corner.” There’s a textile-covered “loop” that shades the rear bench and has optional LED backlighting. Mini says that rear occupants will also be able to control some of the car’s functions through touch controls in the loop. 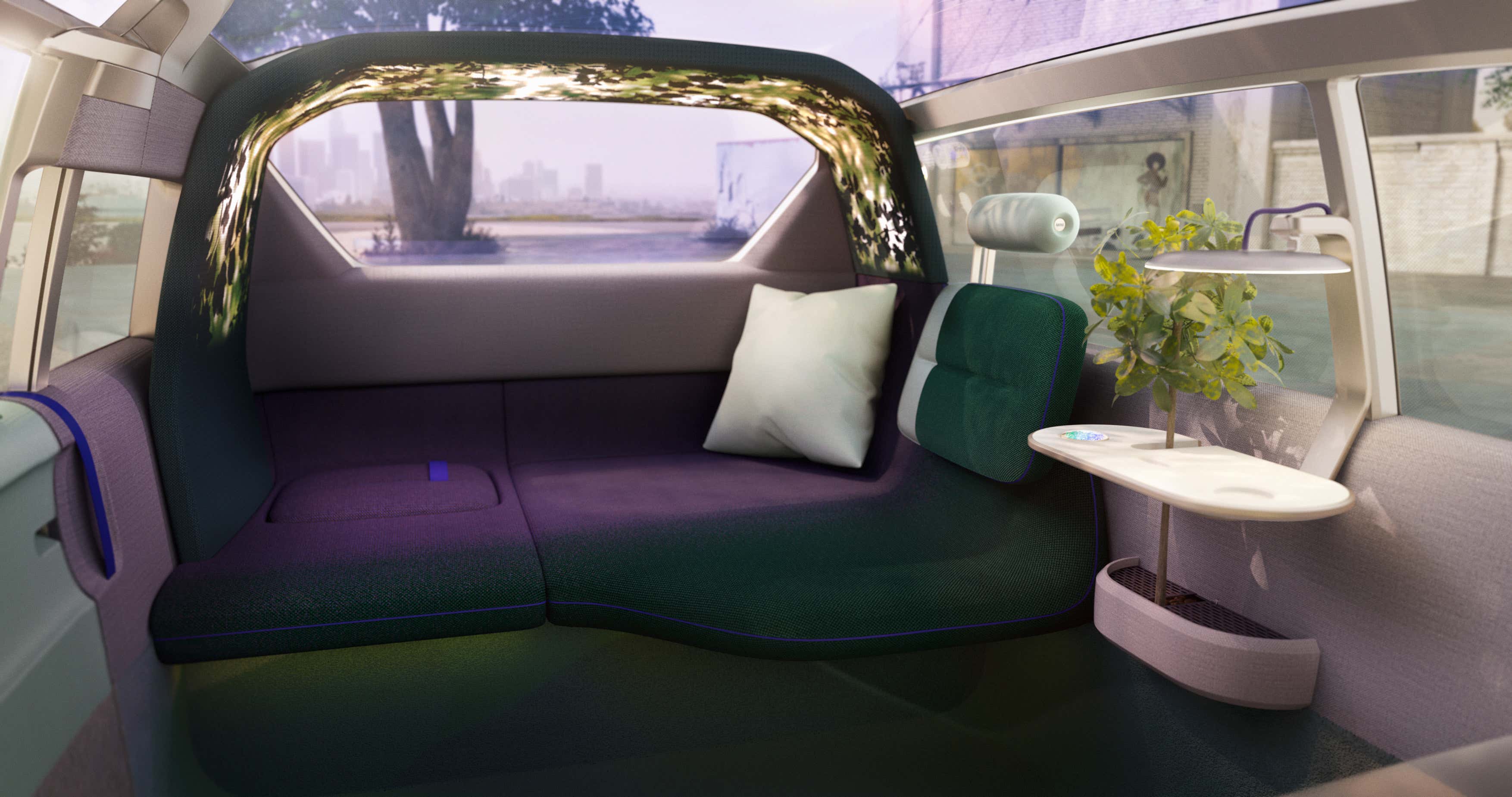 The rear Cozy Corner, complete with a plant growing in the middle of the car.

There’s only one large sliding door in the side to enter and exit the car, which allows the interior furniture area to curve around that door. This configuration also allows enough space for someone to sit in the middle of the floor when it’s parked, just to drive home that they’re the fifth wheel in this party, I guess.

Mini also says that the Vision Urbanaut’s one curb-side door makes it ideal for tight city spaces—i.e. not dinging any cars parked next to you with your doors. Overall, the Mini Vision Urbanaut isn’t too huge, but isn’t too terribly mini—it’s roughly as long as a 2021 Mini Countryman at 14′ 8″, but is unusually tall to make moving around in the cabin easier than ever.

Mini says that they have three “Moments” programmed into the Vision Urbanaut to capture different vibes: “Chill,” “Wanderlust” and of course, “Vibe.” Each moment transforms the look of the interior and exterior to match it and is selectable by placing a special “Mini Token” into one of three slots on the table. In the future, I guess we won’t mistake these slots for cupholders. 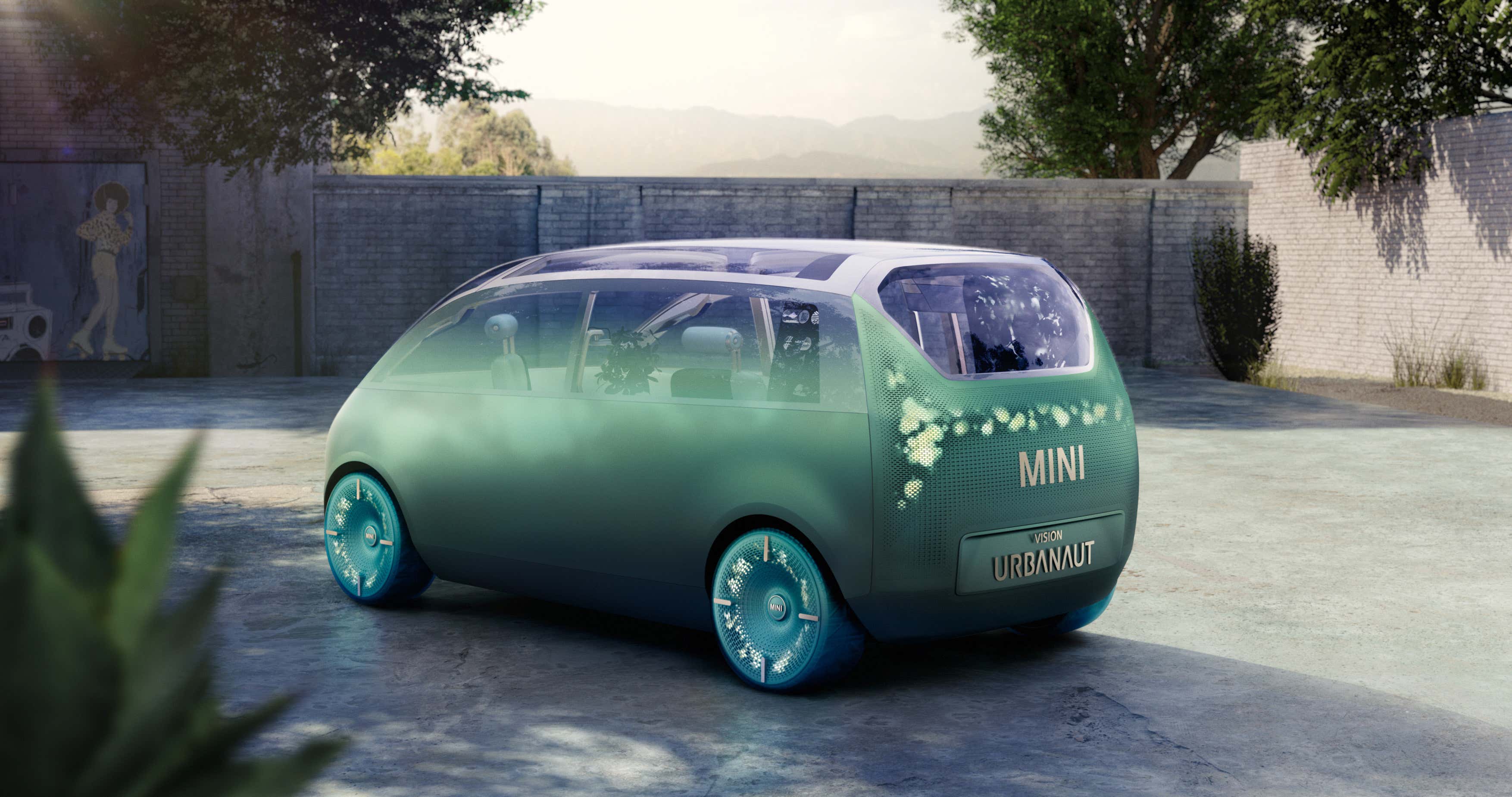 Each Moment also queues up matching lighting on the wheels and exterior of the Vision Urbanaut.

Chill transforms the Vision Urbanaut into the ultimate relaxation machine, even if the car is in motion. Wanderlust is all about driving, regardless of whether you’re doing it or the car is. Lastly, Vibe is centered upon making the car a space to hang out with other people. Remember other people? I miss other people.

You can even program a “My Mini Moment” to cue a custom combination of ambient lighting, interior fragrance, music and other options. Feeling like Green Apple Little Trees, Gwar and magenta lighting? You got it, chief.

You see, part of the Vision Urbanaut’s goal isn’t just to go places, but rather, to become a little living room on wheels. Chill vibes are where you park it, man.