Spring has once again graced Forza Horizon 4. This week’s seasonal switch marks the final week of Series 11, with plenty of content and events in store.

A fresh Playlist update accompanies the new season, with returning cars as prizes for 50% and 80%. There’s also a new off-roader making its series debut to look out for.

Read on further below for our breakdown of this week’s events. 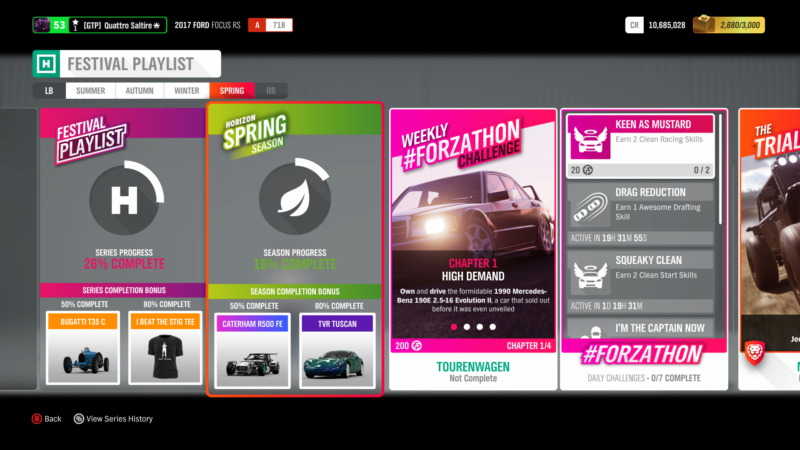 This small British sports car boasts a raft of upgrades, including a Drift Skills bonus. Powered by a 2.0-liter Ford engine, the R500 makes just 263 horsepower. The R500’s 1100lb weight makes it one of the fastest accelerating and most nimble cars around though.

Joining it is the bombastic TVR Tuscan S. This mad sports car features a 4.0-liter straight-six with nearly 400 horsepower. Weighing in at just over 2400lb, the Tuscan will prove a handful in the UK’s changing weather conditions.

Seasonal championship prizes kick off with the debut of the Jeep Wrangler Unlimited DeBerti Design. The third DeBerti car to enter FH4 packs a monster punch for off-road enthusiasts. As well as extensive off-road modifications, the Wrangler is fitted with the supercharged Hellcat V8 producing 707 horsepower.

Players can win the Wrangler by completing the “Mud Bath” Trial event.

The Ferrari 246 Dino also joins the seasonal prize roster. The baby Ferrari comes with a 2.4-liter V6 making a healthy 199 horsepower. It might not be the absolute fastest car of its era, but it’s one of the most beautiful. The Dino can be acquired by winning the “MR Spotlight” championship.

The rest of this week’s events and prizes are below. 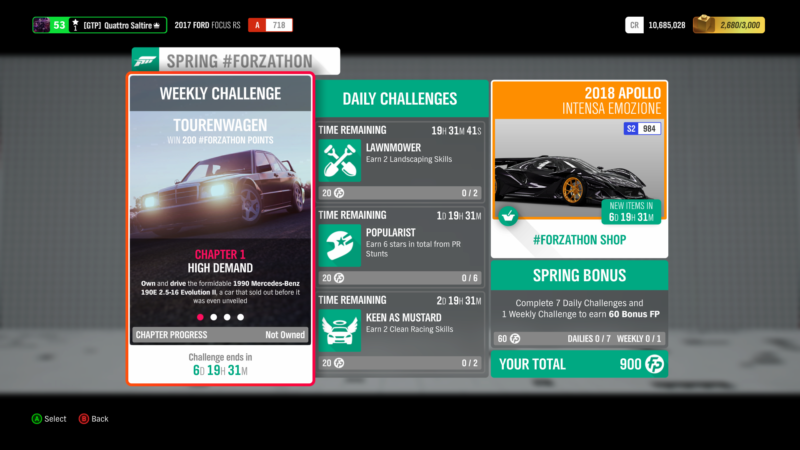 This week, Forzathon goes back in time, with the spotlight turning to one of Germany’s greatest sports sedans; the Mercedes 190E 2.5-16 Evolution II. The first objective is a simple one; own and drive this bewinged touring car legend.

Next up, stretch your Merc’s legs as you’ll need to a total of 3 stars from Speed Traps. For the third objective, you’ll need your sensible shoes on, because you’ll need to earn 6 Clean Racing skills.

Finally, take your 190E for a drive around the UK. You’ll need to cover 20 miles to finish up this week’s challenges. 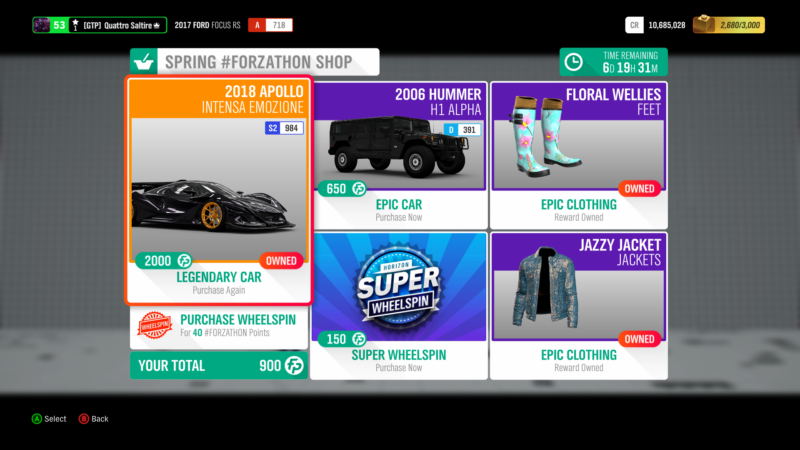 The shop lineup for this week features the most expensive car that has ever been featured. However, it’s no ordinary car.

The car in question is the Apollo Intensa Emozione. As a former seasonal prize back in May, the Apollo is a wild track focused monster. The Apollo comes with a 6.3-liter V12 making nearly 800 horsepower, and a body sculpted for maximum downforce.

The Apollo costs an eye-watering 2,000 Forzathon Points, so if you’re desperate to get one after missing out the first time, you’ll need to have saved a lot of points.

For something a little cheaper, there’s the Hummer H1 Alpha. This American military beast will batter offroad trails into submission and run over just about anything that stands in its way. Costing 650 FP, the H1 might prove a beastly alternative to the standard offroad racers.

Clothing items available for this week are the Floral Wellies and the Jazzy Jacket.

F1's Sebastian Vettel: I put more pressure on myself than anyone else could