Airstream trailers are known for their unique all-aluminium finishes and retro streamliner styling that somehow never goes out of fashion. The company has customers and fans the world over, including famous movie star Tom Hanks, who owned an Airstream for decades and used it as his on-set abode during the filming of everything from Apollo 13 to Castaway to Captain Phillips.
That very trailer will now be up for sale at the upcoming Bonhams auction during Monterey Car Week next month.

The trailer in question is an Airstream Model 34 Limited Excella, built in 1992. The trailer accompanied Hanks to a multitude of movie sets over the years, documented by stickers in the window from each film. It appears the trailer first showed up to the filming of Sleepless in Seattle in 1993, with the last sticker denoting 2017’s The Circle. 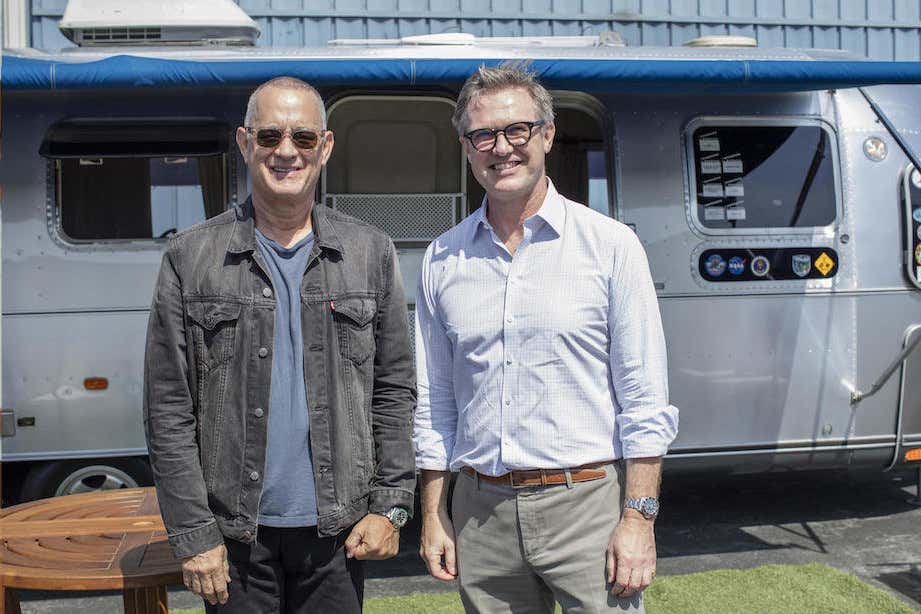 Tom Hanks standing in front of his trailer with a man I have never met.

The two-time Academy Award winner decked out the trailer to his own personal specifications. Shipped from Airstream with just the kitchen and bathroom built-in, the rest of the interior was built out to suit its owner’s personal tastes. “I had spent too much time in regular trailers with ugly décor and horribly uncomfortable furniture,” said Hanks in an interview with Bonhams Magazine, “so I decided to buy a brand-new Airstream shell with an interior made to my own request.”

Inside, it’s not so much an example of glitzy, overwrought luxury so much as Hanks’ own interpretation of a comfortable home on the road. The interior has simple wood finishes on the kitchen cabinets, floor, and dining table, while the lounge area features a big, plush couch and an inviting electric fireplace. There’s a simple single bed up the back, as well as a fully appointed bathroom with a shower. Notably, the mirror features the classic Hollywood lighting because hey, if you’re in this trailer, you’re a star. 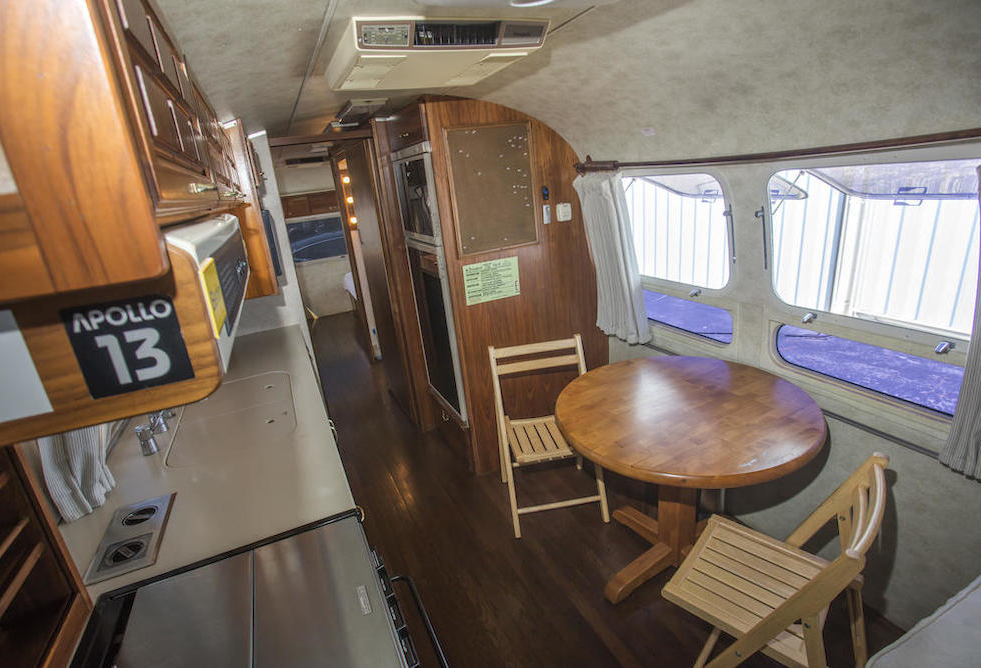 It sure is a trailer! 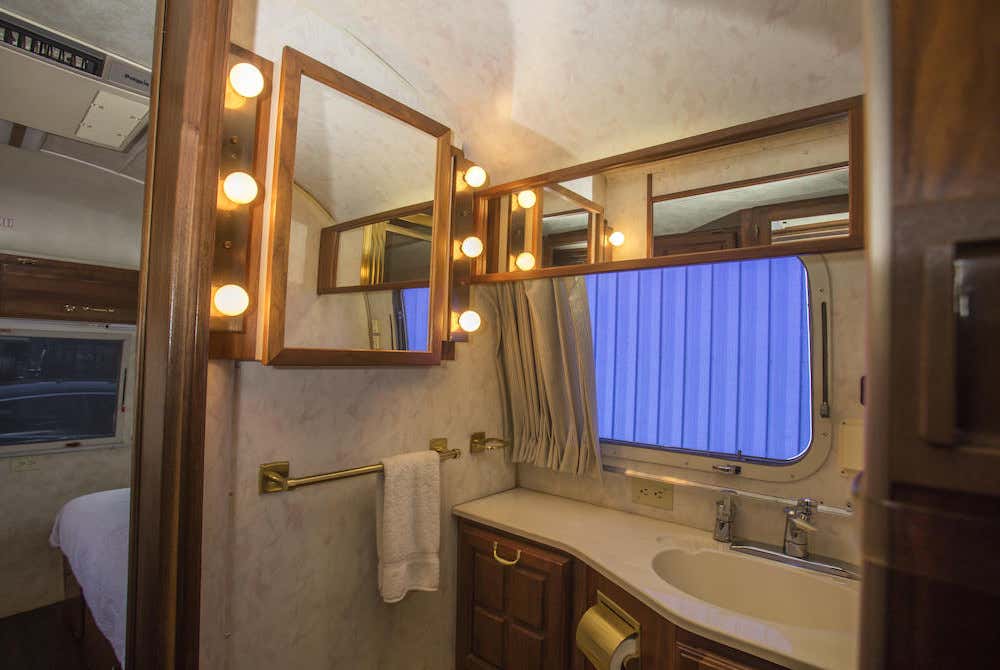 Imagine washing your hands in that bad boy.

The 35-foot trailer comes complete with plenty of accessories and memorabilia. There’s all the dishes and kitchen equipment you’d want for day-to-day use, along with an Apollo 13 mug signed by Hanks and his co-stars Gary Sinise, Bill Paxton, and Kevin Bacon. The air conditioner has also been signed by himself. This could prove as a useful talking point next time you’re stuck at a wedding on a table with people you don’t know. “Did you know I have an air-conditioner signed by Tom Hanks?” you’ll say, and people will smile politely. 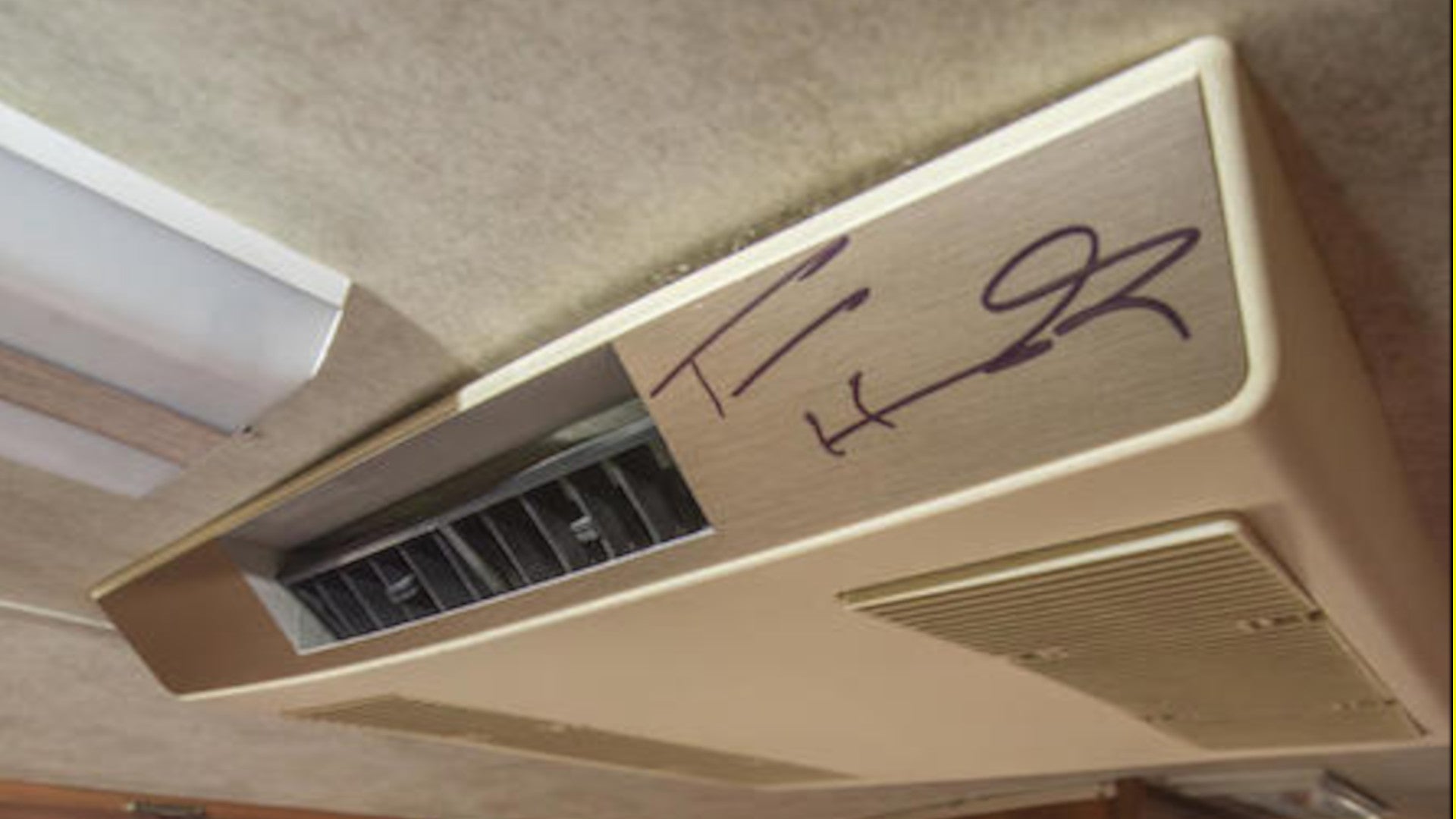 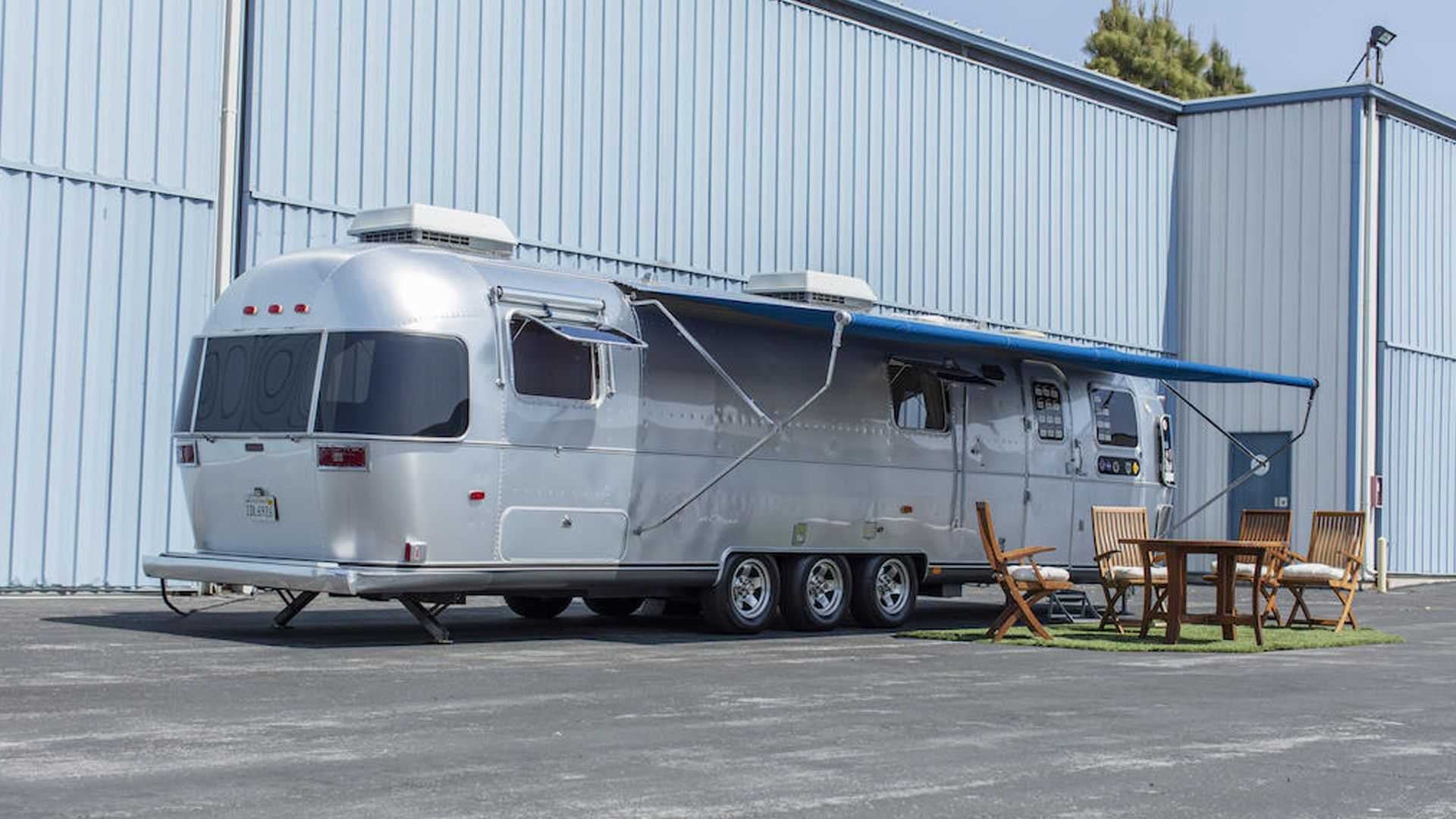 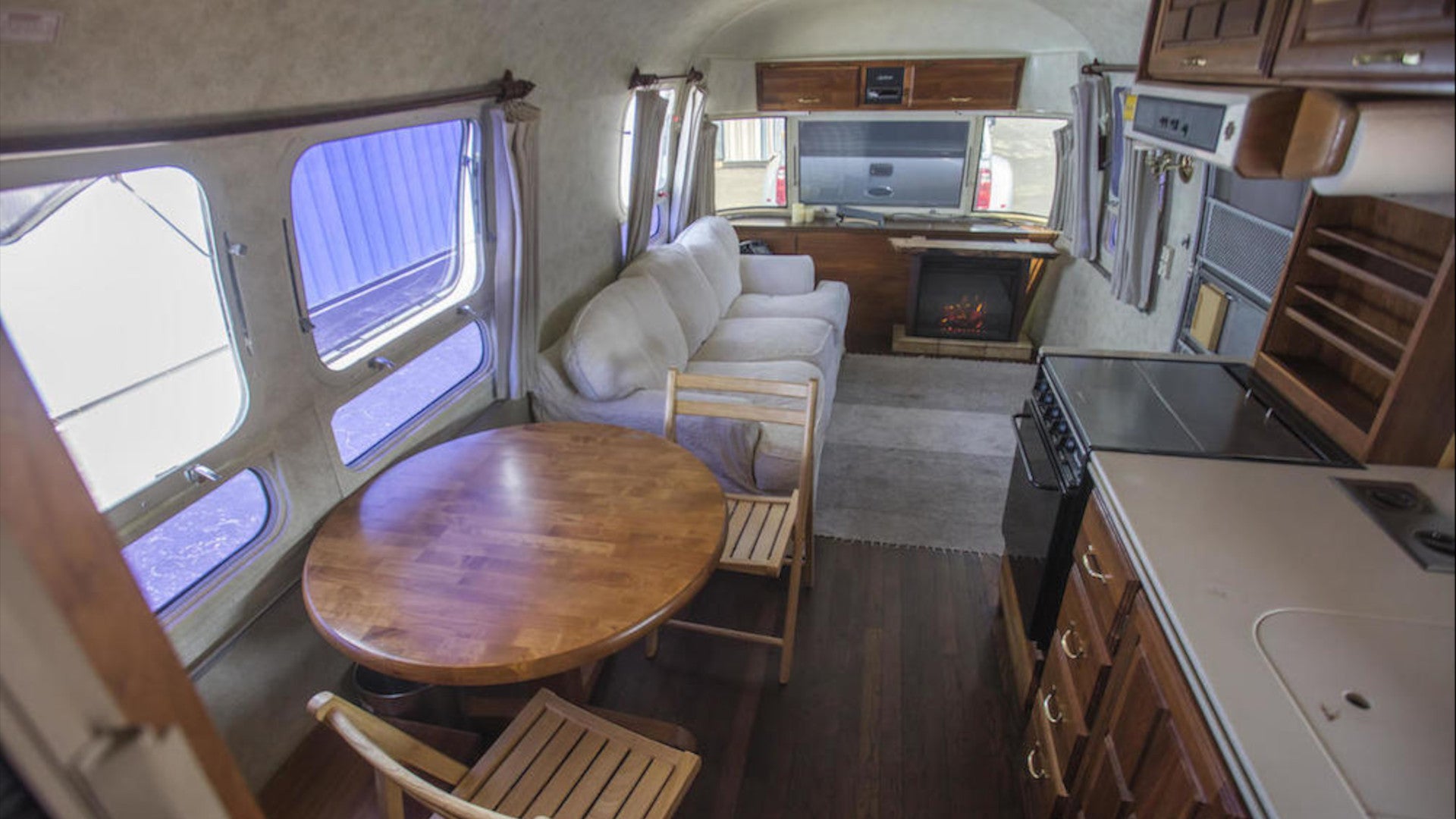 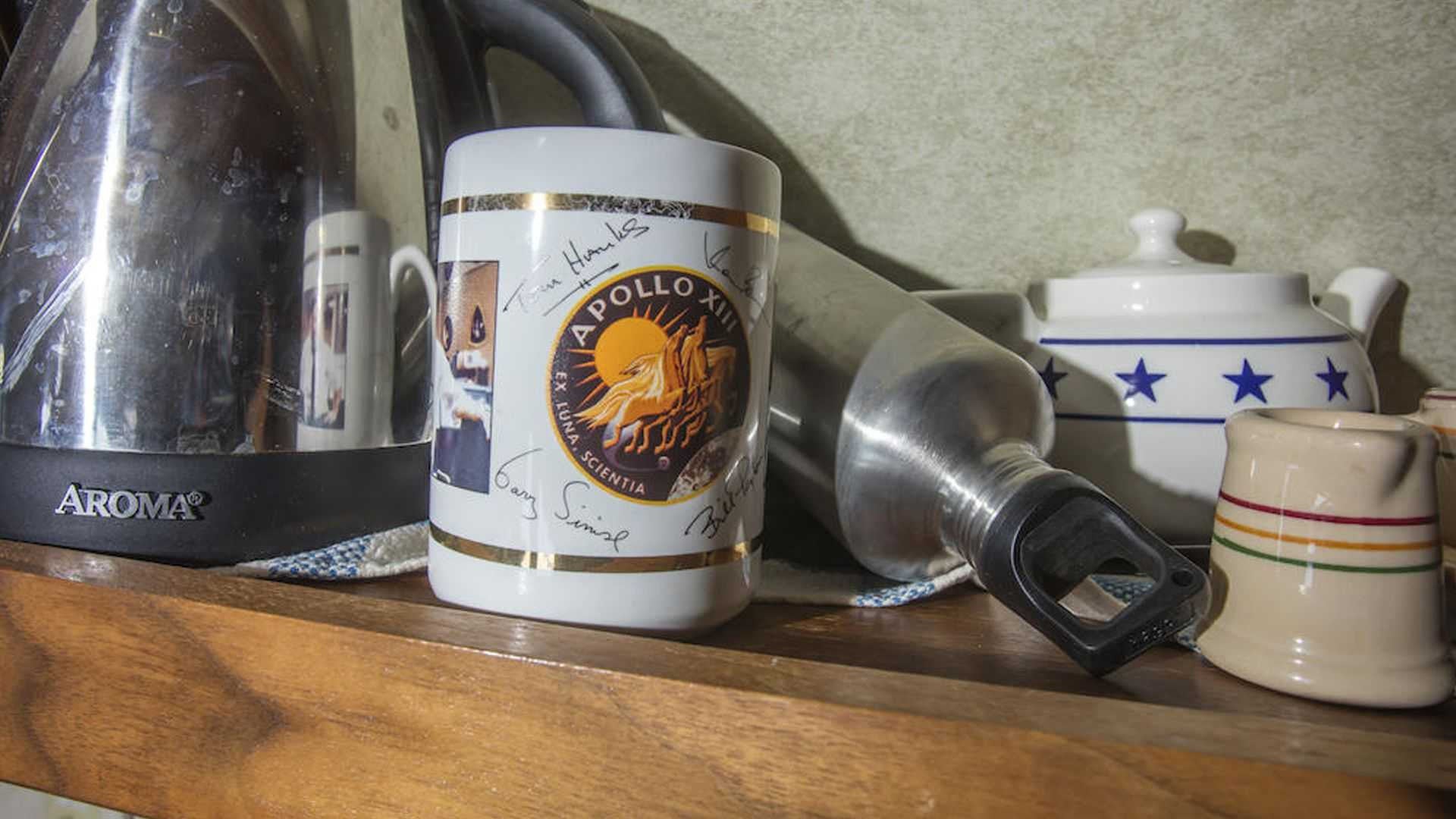 If you want the big shiny trailer, though, you’ll likely have to put up $150,000 to $250,000 based on the pre-sale estimates. It’s more than you’d typically pay for a nearly 30 year old trailer, but given the history and the nice interior appointments, it’s in line with what you’d expect. With that said, the famous Fiat owner’s trailer is being sold without a reserve, so you could get lucky on the day. The auction goes ahead on August 13th, so you’ve got plenty of time to shore up the funds.

Got a tip? Let us know: [email protected]