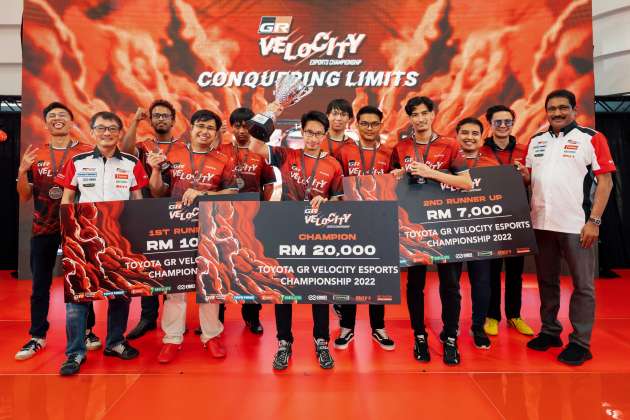 The fifth season of the Toyota Gazoo Racing Velocity Esports Championship came to a close last weekend at the 1 Utama shopping centre in Petaling Jaya, with 24-year-old Muhammad Iqbal Suji from Selangor being crowned champion.

Racing in front of a live audience, Iqbal finished ahead of nine other finalists in the three-round grand finale to walk home with the RM20,000 grand prize. Completing the podium were Muhammad Uzair in second place and Taj Izrin Aiman Taj Madira, who finished third.

The grand finale started off with a sprint race in Round 1, on the Brazil Autodromo Interlagos circuit, followed by a 30-minute race on the same track in Round 2. The third and final virtual race took place at the Circuit de Spa-Francorchamps in Belgium, with drivers competing in the 1,000 hp Toyota TS050 Hybrid for 40 minutes.

Together, the trio will now represent Malaysia at the Toyota Gazoo Racing GT Cup organised by Toyota Motor Asia Pacific (TMAP), scheduled to take place on October 2. If triumphant, they could go on to represent Asia in the global finals, which will be held in Monaco on November 25, 2022.

“Winning the event made me recall all the emotions and frustrations of not getting the position that I felt I deserved over the last few years, and now that I finally have, it feels great,” said Muhammad Iqbal.

“The Toyota GR Velocity Esports Championship gives those who excel online an ideal platform to further develop and unleash their full potential, with the opportunity to transition to real racing,” said Ravindran K, president of UMW Toyota Motor.