Fifty years ago today, Apollo 15 mission commander David R. Scott excitedly relayed to Mission Control that he had collected an important sample at the Hadley-Apennines landing site. Dubbed the Genesis Rock, it was identified as anorthosite, a piece of the moon’s primordial crust, and it’s estimated to be an astonishing four billion (with a capital B!) years old.

This and myriad other discoveries would not have been possible without the lunar roving vehicle, or LRV, that made its debut on that fourth spaceflight bound for the moon. Stowed aboard the final three Apollo missions, the “moon buggy” experienced a mishap on the Apollo 17 landing that would have been a disaster if not for the inclusion of a decidedly analog tool on the spacecraft: duct tape. 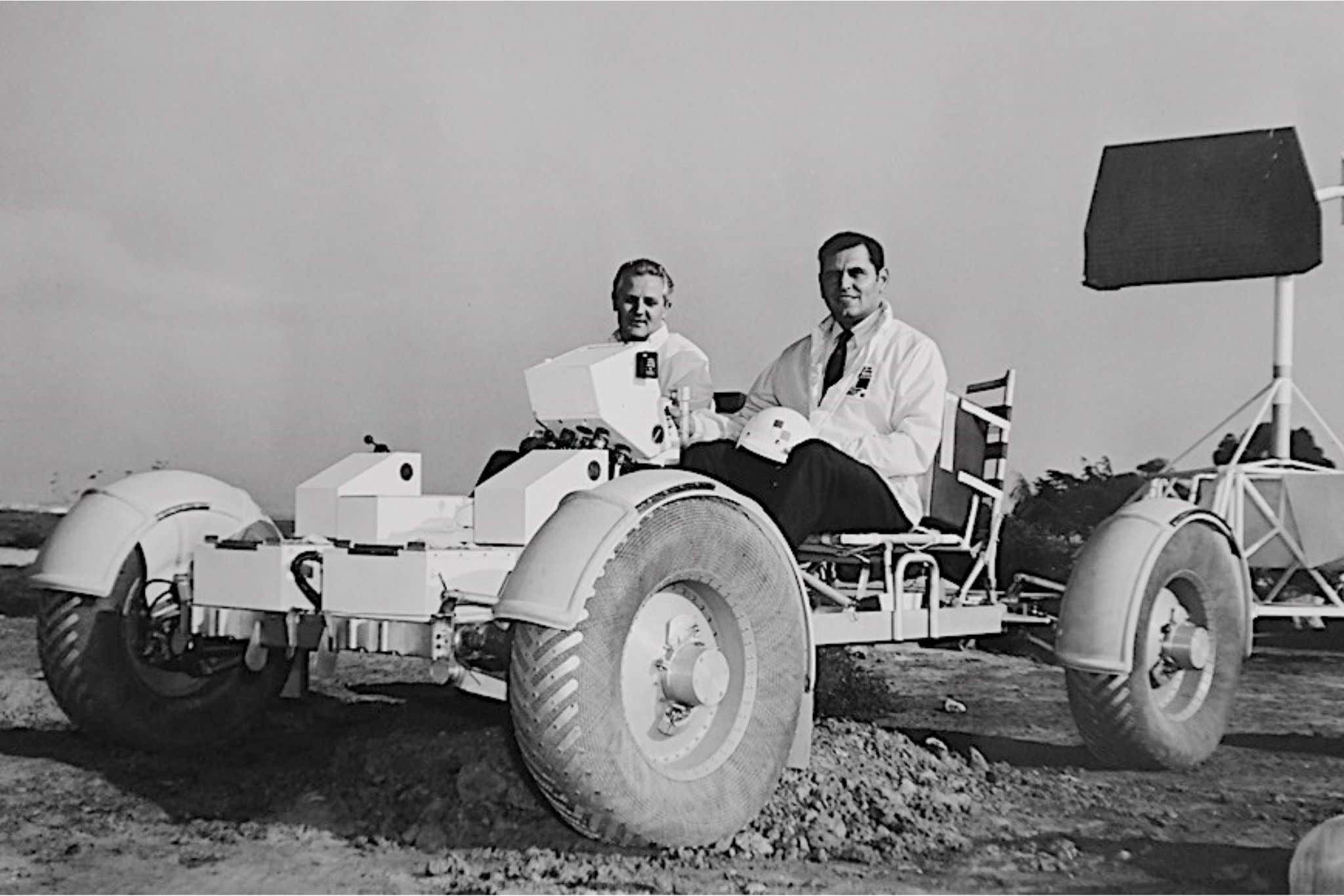 That’s right: duct tape ruled the day once again, two years after Apollo 13 astronauts saved their own lives with it. A hammer on the bulky spacesuit of Commander Gene Cernan (who nearly lost his place on the mission due to a helicopter mishap) had snagged on the right rear fender of the rover and popped it off. As a result, the wheel shot “rooster tails” of dust into the air, exposing Cernan and Lunar Module Pilot Jack Schmitt to the spray. That might not sound like a big deal until you learn that moon dust spreads quickly and absorbs massive heat from the sun; it would easily harm both the vehicle and the astronauts’ space suits at a rapid clip.

“Ohhh you won’t believe it,” Cernan says in the recorded audio (check it out at 36:30 in the video below). “Ohhhh there goes a fender. Oh shoot.”

Back in Houston, engineers had to figure out how to instruct the astronauts to rig the materials they had on hand to create a surrogate fender to save the mission. Using four of the 28 geological maps, duct tape, and two clamps from the optical alignment telescope, the astronauts fashioned a new fender extension to keep the lunar dust at bay.

Apollo 15 alone cost NASA close to $450 million in 1971, and the LRV-1 project accounted for less than three percent of that. Some journalists of the day called it “the most expensive vehicle ever made” since it required millions of dollars and could only be driven for three days on the surface of the moon. The diminutive vehicle made all the difference, though.

Starting with Apollo 11 in July of 1969, NASA completed six missions during which 12 astronauts set foot on the moon. During the first three, they walked short distances from the lunar landing sites, partly hindered by spacesuits that were 21 layers thick. Moving in the suits was exhausting, costing the astronauts precious metabolic energy.

“It would be like putting on a dozen raincoats and then pumping them full of air to the thickness of an all-season radial tire,” says Earl Swift, the author of the just-released book Across the Airless Wilds: The Lunar Rover and the Triumph of the Final Moon Landings. “Even to bend your arm took muscle and the suit weighs more than they did. If you look back at old footage, they’re bunny hopping around but you can’t see that they’re working their butts off to get from point A to point B.” 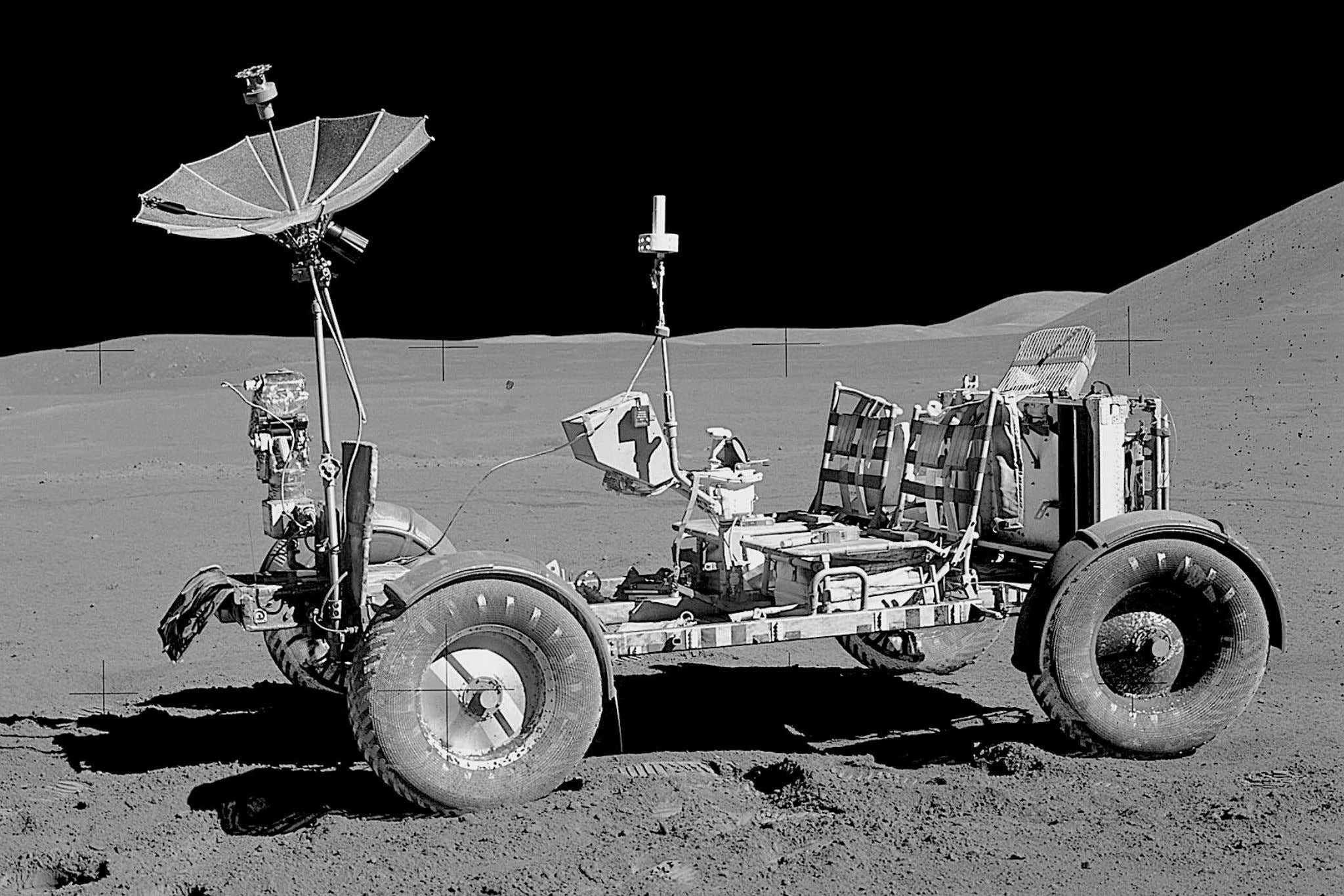 Tack on the confusing, surreal proportions on the moon that makes everything feel like you’re looking through Alice in Wonderland’s skewed perception and it’s a wild place.

“The horizon is weirdly close, at only two miles away, and a mountain might be ten miles away but looks like it’s right next to you,” Swift says. “The sky is utterly black. In the absence of clouds and trees– everything that gives you proportional aspects–it’s difficult to judge distance. It’s crazy up there.”

Adding the LRVs changed everything, allowing the astronauts to collect a sample then rest while the moon buggy rolled over foot-high rocks, crisscrossed the Marsh of Decay, and explored the edge of a mile-wide canyon. On Apollo 11, astronauts could only venture 65 miles from the spacecraft. By Apollo 17, the LRVs took the men about 17 miles in total. So much more could be explored with this tiny rover.

“The lunar rovers fulfilled the whole promise of Apollo,” Swift told me on the phone. “Compare the first three moon landings [during which they explored on foot] to them driving, it’s night and day.” 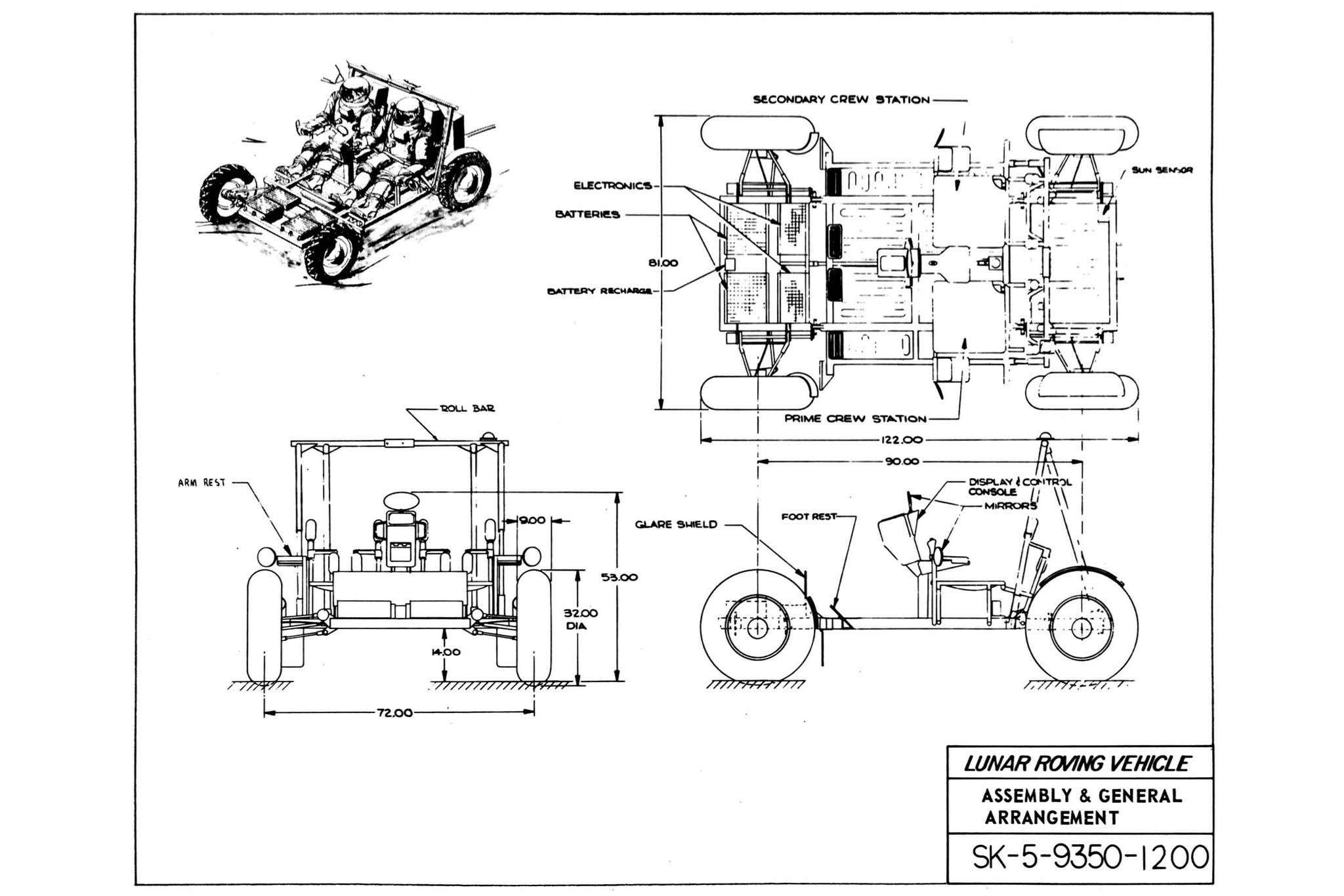 Primitive compared to modern standards, the lunar rovers had to be foldable and incredibly lightweight (a dirtbike design was even on the table). When the project went out to bid, Swift says, Chrysler was the low-ball option but what it proposed was not what NASA had in mind. Chrysler’s design required the driver and passenger to sit back to back, with no room for gear and no way for the other astronaut to take over should the driver become suddenly incapacitated.

That left the General Motors/Boeing team with the lowest bid of the rest of the contenders. According to Swift, GM didn’t dominate the categories but came in a close second in each, so they won the project on points and price. Plus, GM had a long relationship with NASA on rover studies all through the 60s and GM had demonstrated that it understood what was needed.

Built to carry twice its weight, the LRVs were like mighty worker ants. Each weighed 460 pounds on Earth and only one-sixth of that on the moon, which allowed the astronauts to pick it up and move it around. The rover folded over like a business letter and then again to fit into a wedge-shaped space in the cargo area. It’s about the size of a pup tent when folded, Swift says, and it was about two-and-a-half feet shorter than a Miata when unfolded. 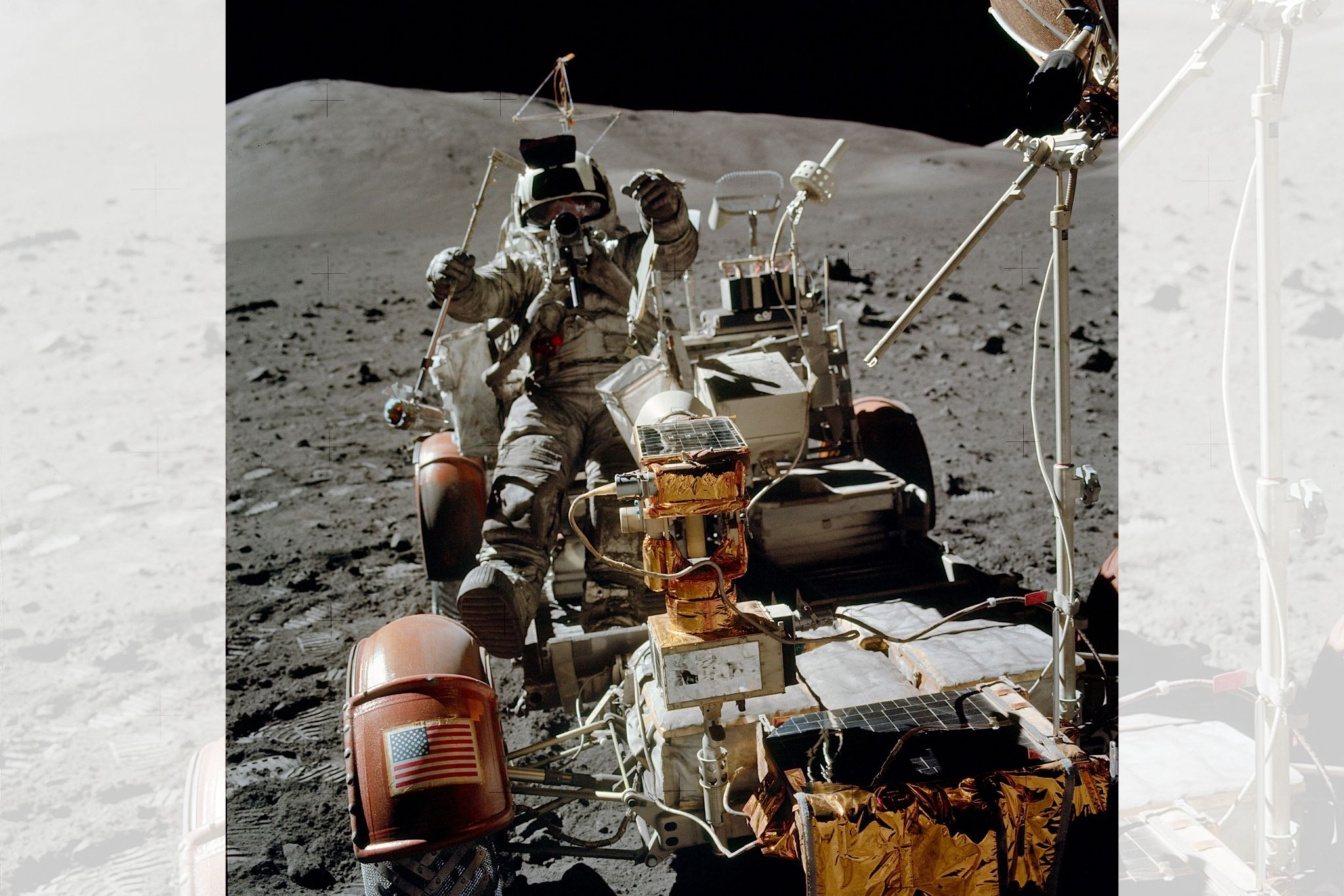 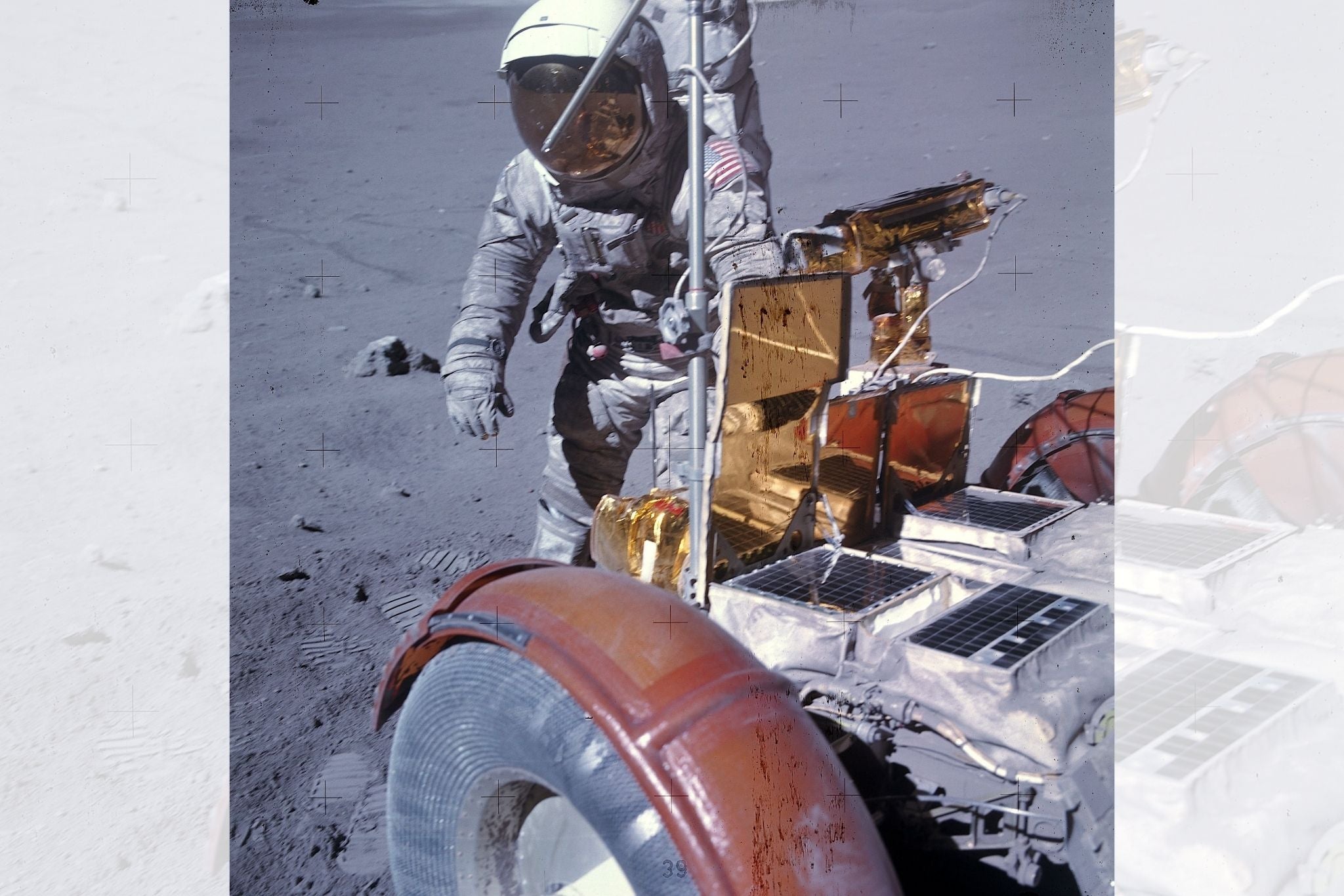 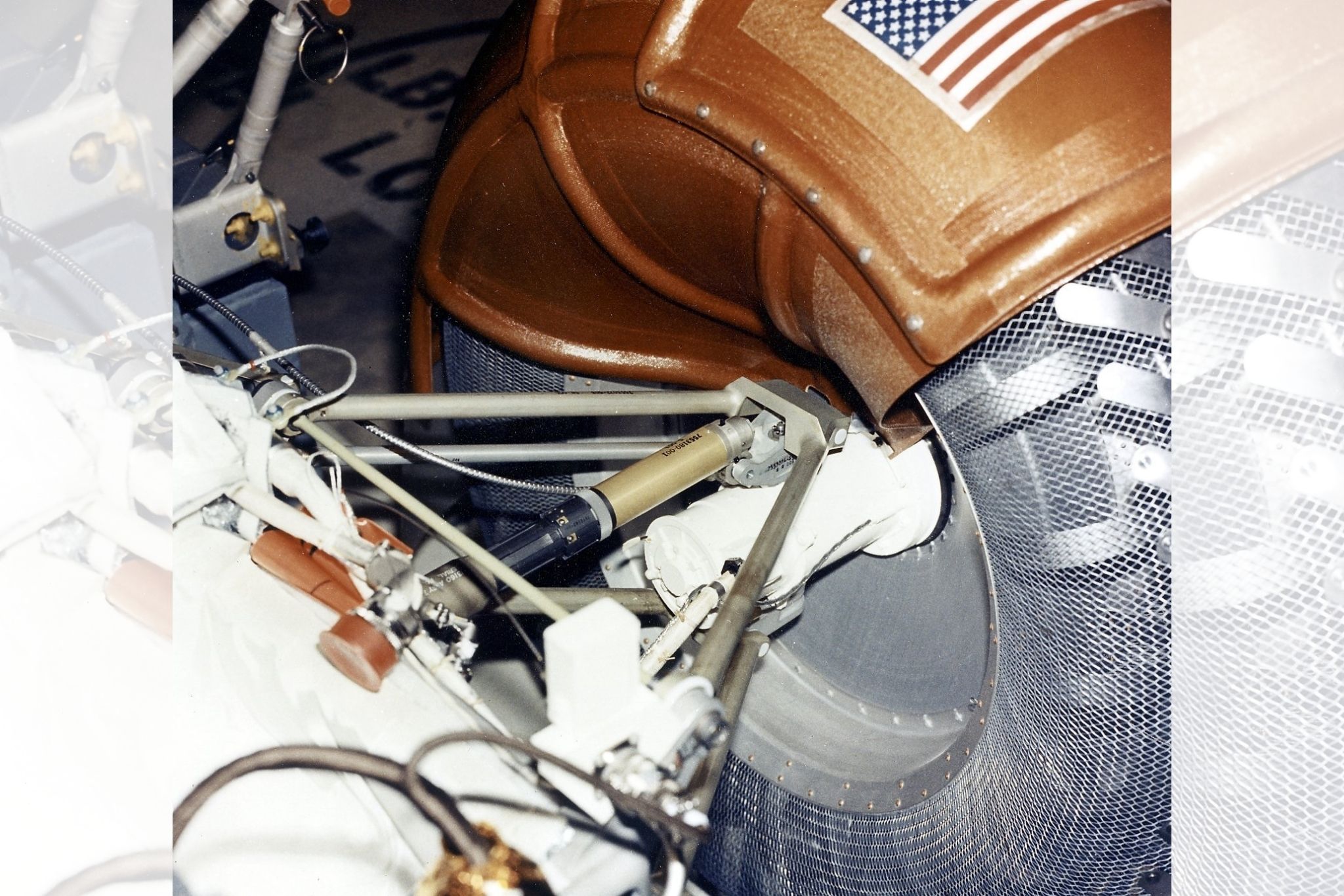 “The contraption had to work with the reliability of an expensive watch every time,” Swift wrote in his book. “It had to happen quickly and require little muscle from the astronauts, for time and effort were precious. That aside, there was the vehicle itself, insofar as there was very little to it—it was tiny, its seats looked like lawn chairs, and it lacked a body or a roof or a steering wheel or much of anything, besides wheels, that typically define a car.”

Speaking of wheels, the GM team came up with stainless steel wire-mesh wheels that weighed 12 Earth pounds each, including the rim. Four motors ran the LRVs with one horsepower, barely more than a weed whacker; it was enough to propel them on the lunar surface. If one or two of its motors failed, it could run on the remaining motors, Swift says. If three failed, it might even limp along on one. 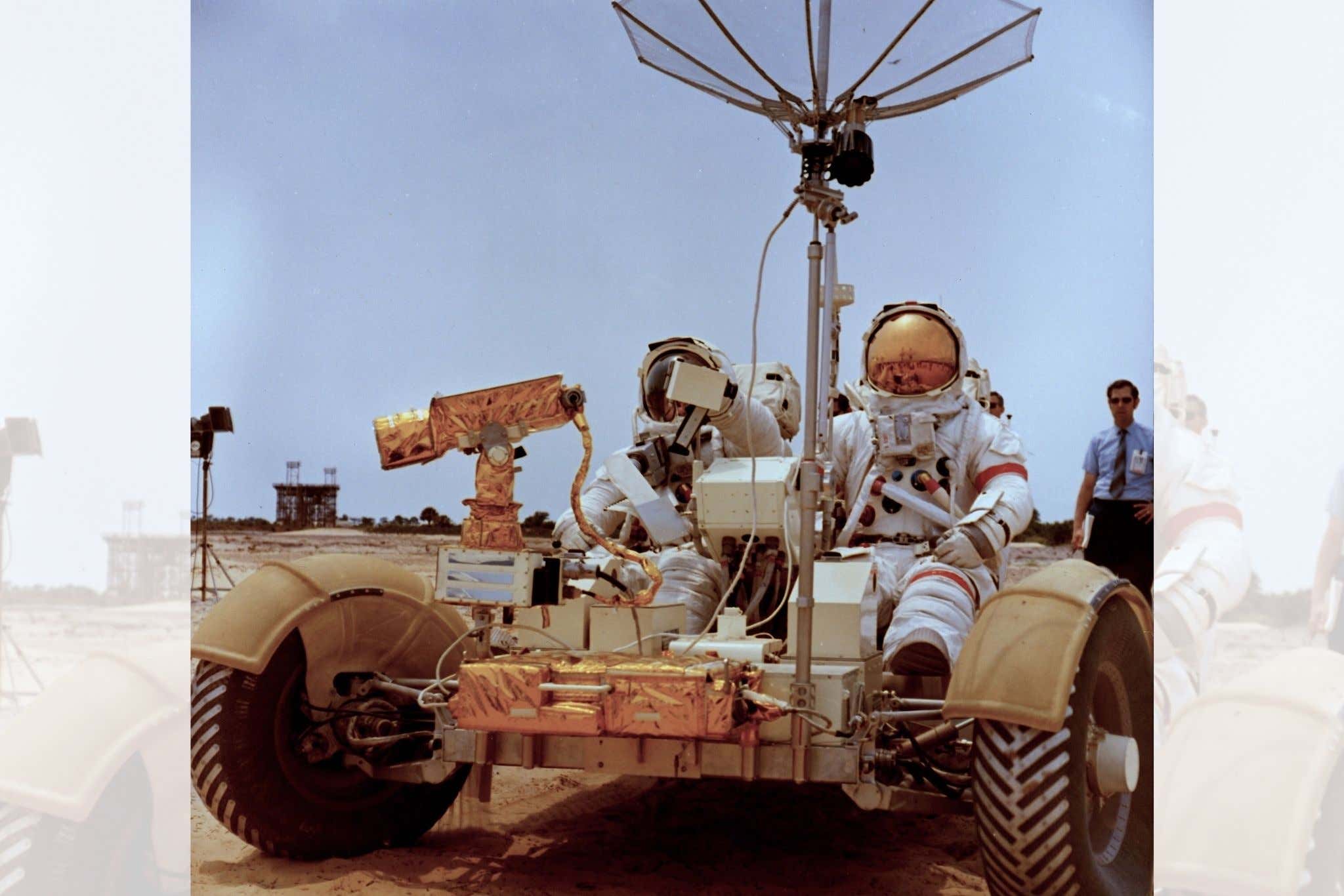 The work was arduous and extremely time-consuming for those who worked on the LRV project. Frank Pavlics, the rover chief engineer at GM, says he didn’t see his kids much during the accelerated 17-month development period. In the process, he came up with the LRV’s wire-mesh wheels and schematics necessary to squeeze the rover into the compact cargo bay on the lunar module.  Now 93, Pavlic is humble about his accomplishments; Swift says the one flourish of self-promotion was that the undercarriages of all three rovers bear his signature.

Beyond space exploration and automotive advancement, the LRV project was also the wellspring of studies into miniaturization.

“The laptop I’m using today would look far different had that first foundational work not occurred with the space program,” says Swift. “Shrinking down microprocessors to tiny sizes is related to this project, as well as managing heat generated by electronics. All of that ‘unsexy’ development is critical to technology today.”

Stay tuned, because there are more space-age developments coming from GM with the next space mission, slated for 2024.

Production Of Popular Jeep Gladiator Halted Due To Chip Shortage