Bugatti has a new, limited edition of the Chiron Sport called the Chiron Sport Les Légendes du Ciel that tips its cap to French aviation. The ultra-high-end marque is drumming up hype for it the only way one can and should drum up hype for a French aviation-inspired, multi-million-dollar hypercar: by launching it alongside a French fighter jet, taking inspiration from that one time Top Gear raced a Veyron against a Eurofighter Typhoon.

Limited to 20 units, the Ciel edition Chiron features fighter jet-esque matte gray paint, the colors of the French flag on its carbon side skirts, and grille slats made of laser-cut aluminum that have been shaped to mimic planes in flyby formation. Gaucho leather is used and apparently reminiscent of leather used in historic aircraft. Of course, the 1,479-horsepower, 8.0-liter W16 engine is still intact and the whole thing costs the euro equivalent of $3.52 million. (A bargain once you remember the Chiron Pur Sport The Drive‘s Deputy Editor Kristen Lee is driving as I write this costs nearly $4M.) 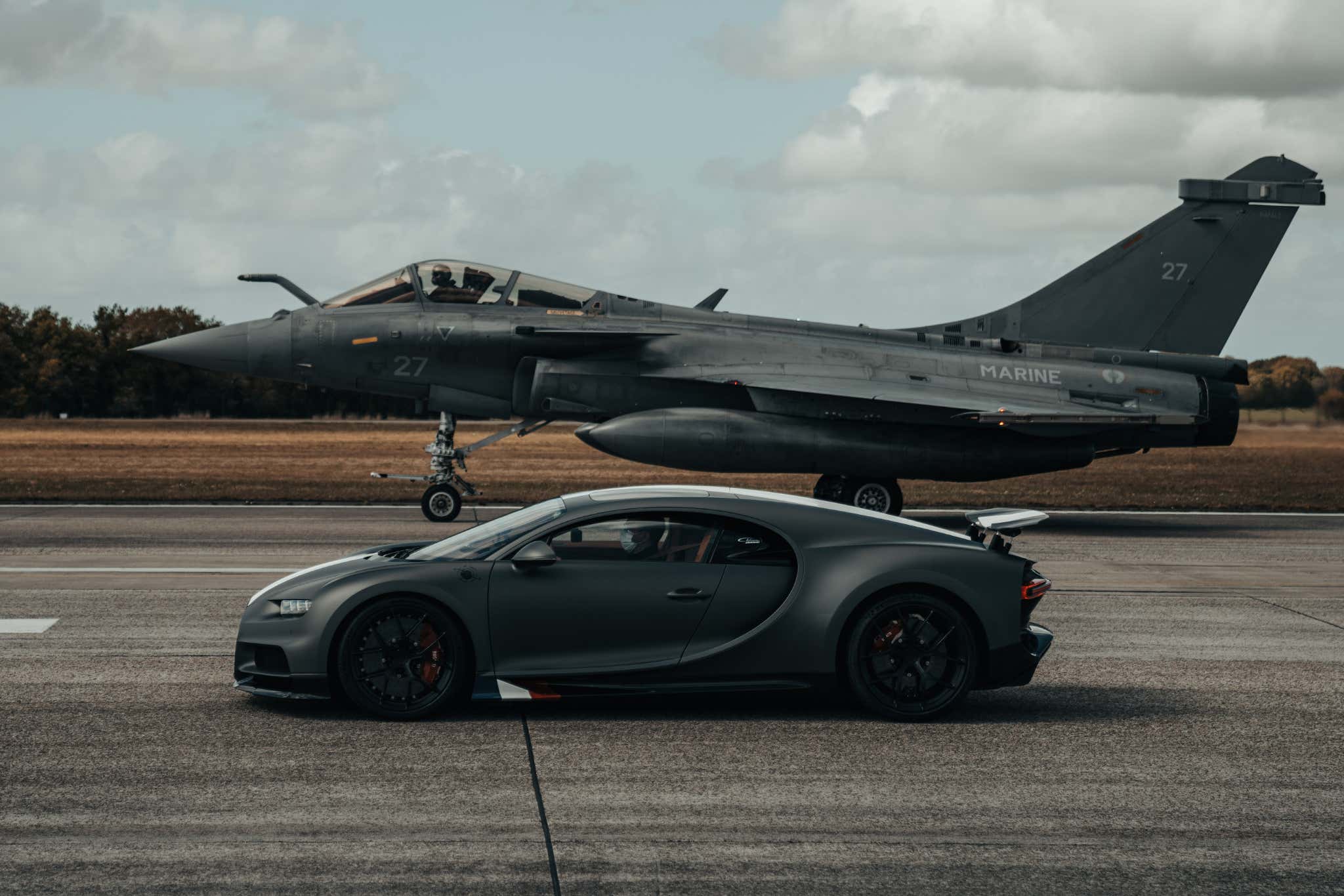 In the other corner, we have the Dassault Rafale Marine, a French-developed plane designed for the country’s Navy. In service since 2000, it weighs 10.3 tons dry and is able to take off over remarkably short distances thanks to a “virtually tailless delta wing construction in a mid-wing design with canard wings.” I’m not exactly a plane expert but I’m pretty sure it has something to do with wings. While the Chiron Sport officially hits its limit at 261 mph, the 5,649-hp Dassault doesn’t stop pushing until 1,227 mph or 1.6 Mach.

With the car able to hit 62 mph in just 2.4 seconds, it pulls away from the jet initially but, eventually, the Dassault does that thing that planes do and literally takes off, up and away from the relatively pedestrian Chiron. “I pulled away from the Rafale over the first few hundred meters, but after a few hundred meters more it was around 20 meters above and alongside me in the air. An incredible and fantastic sight,” recounts Bugatti test driver Pierre-Henri Raphanel.

Got a tip or question for the author about Bugattis and fighter jets? You can reach them here: [email protected]