Off-Road recovery is no joke, and Matt’s Off Road Recovery out of Hurricane, Utah is pretty handy at it. The company regularly posts videos of it’s back-country recovery exploits on its YouTube channel, and this week there was an especially sketchy one.

We’ve previously covered a precarious recovery it did of a Silverado danging off a cliffside, and this one is along those lines as well. A Jeep stuck at the bottom of a shallow canyon apparently blew its engine, and needless to say, towing the dead truck out to safety was easier said than done. 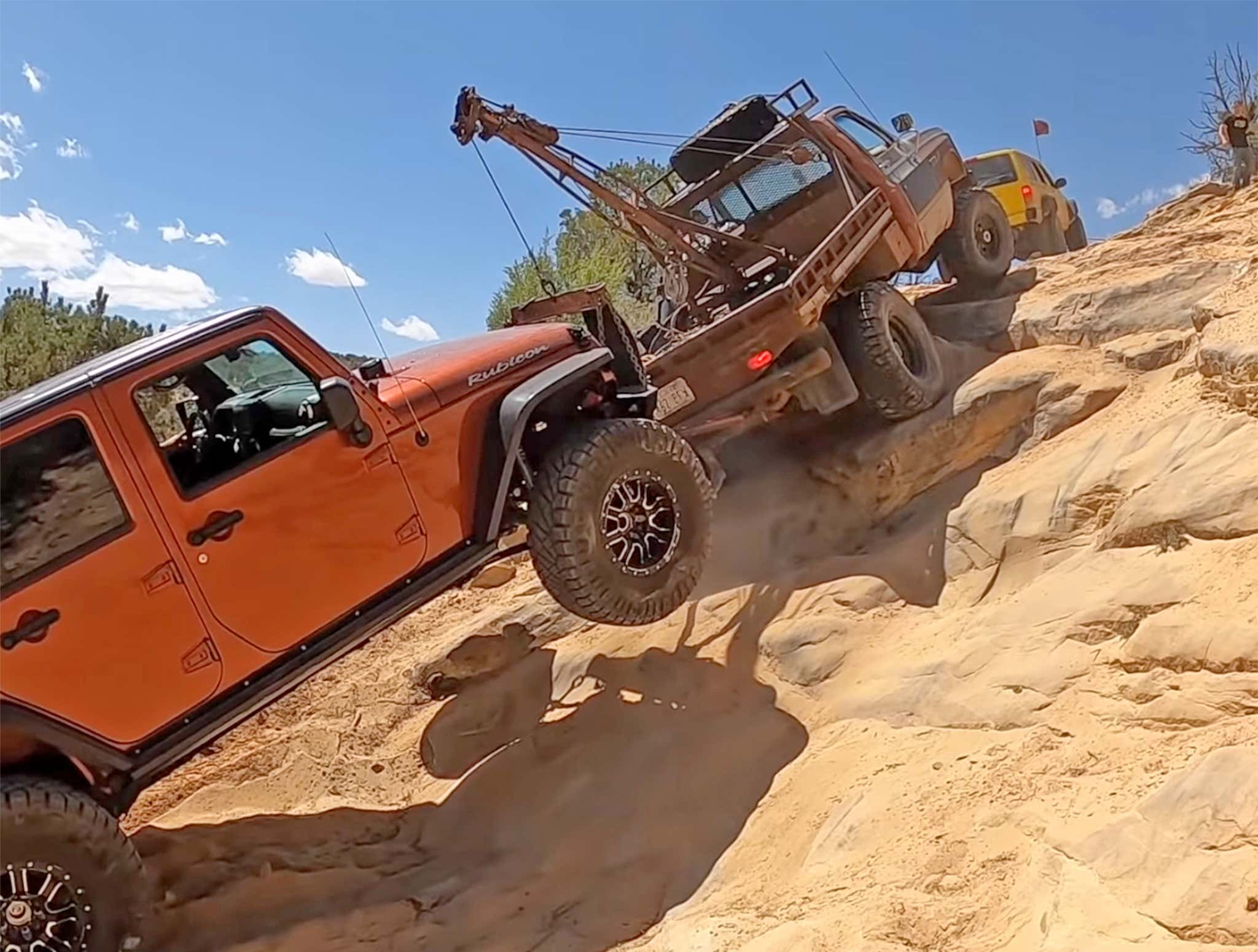 The stuck Jeep in question is a JK model, built between 2006 and 2018. Although the Pentastar is known for its reliability, the V6 in this Jeep apparently packed it in, fresh out of oil. It was, however, able to get the Wrangler it powered pretty far down a 4×4 trail before doing so. Very convenient.

In any case, Matt, the owner and operator of Matt’s Off Road Recovery, shows up with a small convoy of vehicles ready to drag this Jeep out of the canyon. It doesn’t go quite as expected, but few of these off-roading adventures into the backcountry ever do.

After arriving on the scene, the newer Jeep is dragged up into position by a trusty old XJ to a spot where it can be hooked onto a sketchy—but actually pretty sweet if you ask me—off-road tow truck. It’s a 383-equipped “square-body” K10 with an SM465 four-speed stick from Muncie, owned by Paul from the YouTube channel Fab Rats.

The rear end of the truck has a “spool” in it, a hunk of metal—there are several different styles—that you install in your rear differential to lock the rotation of the two back wheels together. It’s a crude yet inexpensive alternative to a locking or limited-slip diff, and it’s popular with drag racers and off-roaders alike. It has an NP205 transfer case as well, a sturdy two-speed unit whose low range is perfect for situations like this. Interestingly, the truck’s onboard engine-driven air compressor appears to be a re-purposed V-twin unit from an old Chrysler’s air conditioning system. A cool way to re-use an otherwise outdated accessory.

The yellow Cherokee leading the pack is Matt’s own creation, a modified XJ with a few engine mods like a bigger radiator and extensive suspension work. He has a video talking through everything he’s done to it, if you’re interested.

Together, the two trucks drag the stricken orange Rubicon out of the shallow canyon, inch by inch. There are a few spots where the going gets a little hazardous—at one point it appears as if every vehicle in the group has at least one wheel off the ground—but nobody gets hurt and the Jeep makes it out on time.

Since it reportedly ran without oil, the motor in the JK is likely junk. In any case, it was towed all the way back to Paul’s shop, where the vehicle’s owner can decide what to do with his blown-up 4×4. At least it’s out of that canyon safe and sound.